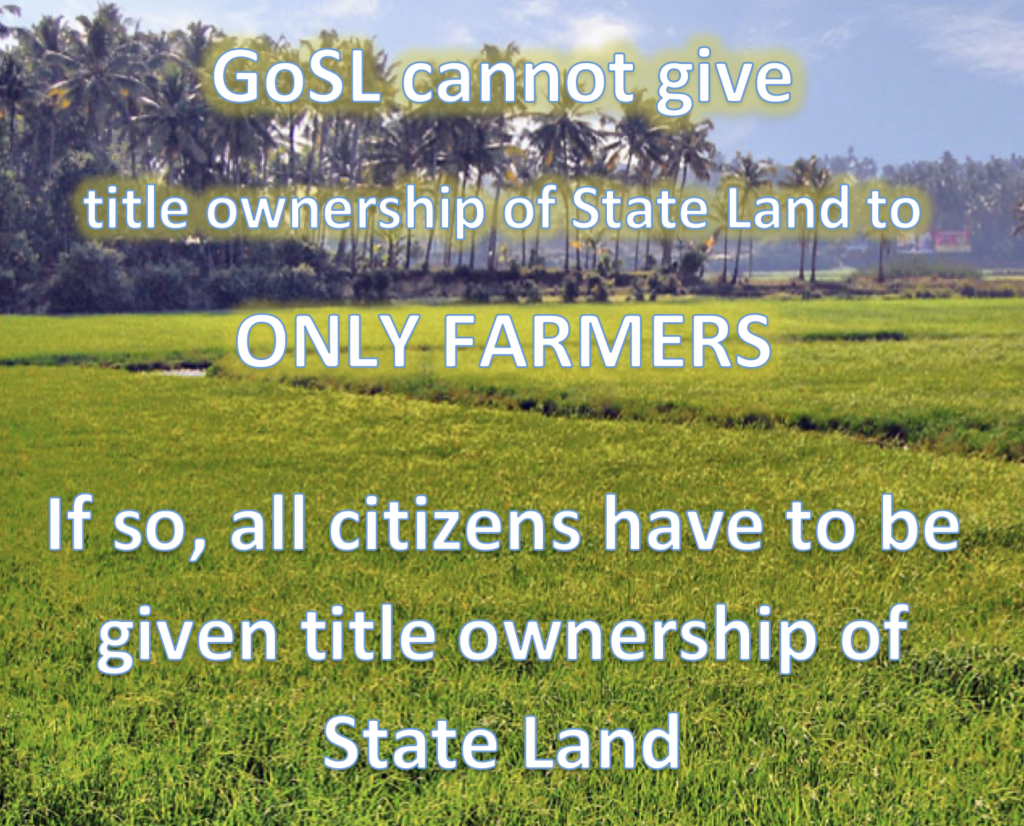 The current government is only a caretaker government with a cocktail cabinet. Its mandate was to only deal with the financial crisis. The prime minister has no mandate to give state land to anyone as title ownership. The same prime minister attempted to do same since 1999. He was ousted by the previous President for this very reason. The present President must also act & protect the State (People, Land, Resources) which he pledged to preserve & protect based on which he was elected President.

Whether it is to citizens or foreigners land cannot be sold & is generally leased under various schemes for numerous terms.

Outright ownership cannot be given & if so given, it can be legally challenged.

Why can’t a govt sell land or give title ownership to State land?

A Govt is only a temporary custodian of the State (comprising the land, the resources & the people)

State land & its resources belong not only to this generation but future generations as well.

The unwritten rule is that what we enjoy has to be left for future generations to enjoy just as we are enjoying what was left for us.

What if a govt sells or gives title ownership to the 84% State land?

If a govt decides to give title ownership of the 84% State land then State land no longer becomes under the State.

This is why the statutes related to land clearly declare that State land can only be leased.

Successive governments for political & corrupt purposes have attempted to deviate from this principle & created emotive campaigns to justify giving away state land.

Campaign: to give farmers ownership of state land

The issue of state land has emerged following repeated attempts to give title ownership of large tracts of leased land to farmers as title ownership. That this effort failed previously shows that people realize the dangers of this initiative.

This campaign is cunningly using propaganda that farmers cannot take loans, farmers deserve their own piece of land etc. This is to arouse emotions of farmers to negate any opposition by people who see the greater dangers & long term implications that will be felt by the farmers themselves.

What those who wish to give title ownership to state land hides, is that foreign investors have been demanding large tracts of farmland under their control and Governments have tried various googlys to cater to this demand. The Millennium Challenge Corporation (MCC) is also eyeing these lands and explains why the sudden rush to give farmers state land ownership. This highlights how governments are not only endangering our sovereignty, by land sovereignty, our food sovereignty & people’s livelihood sovereignty as well.

No government should be allowed to take such unilateral decisions most of which is done without consultation, without looking at the long term repercussions & in secret.

We expect the legal fraternity to not be part of this same insidious campaign as these are fundamental right violations of the People, as the constitution clearly advocates that sovereignty is inalienable & with the people and the State is the people.

Note: contrary to what is being told, farmers do take loans from banks & banks do offer facilities to farmers to take loans and banks gives loans without a deed ownership to the land. Therefore, the key excuse being used by the Prime Minister to give state land title ownership is incorrect.

These seventy plus politicians will soon depart but not before leaving a legacy of problems to the country unless legal channels prevent them from doing so.

The legal fraternity in particular the judiciary must uphold the principle of Public Trust Doctrine and safeguard the land – for without land, there is no sovereignty of any kind for anyone.