The very controversial and dangerous US transnational project known as MCC Compact has generated public objections for the right reasons and if not for the resolve of a handful of people who went out to publicly educate the people, the previous government would have done a 1815 on us (betrayal of the Nation) in 2015 itself. It would have become a treachery repeating itself after 200 years. The dangers seen by the public was to ensure another 1840 Wasteland Ordinance type land grab by foreigners would not take place via MCC. The plan was not plotted in 2015 but by helping regime change the plotters found it easier to roll out their plan that had been incrementally laid out via various international funding programs and associated demands. The public objections resulted in the new government appointing a Committee to review the MCC Compact headed by economist Dr. Lalithasiri Gunaruwan. Their interim report recommended not to proceed with the MCC given its impact on socio-economy of Sri Lanka & violation of constitution & sovereignty. Their final report expanded on what was given in the interim report. The shocker comes in the revelation that the US Govt/MCC has given $10million during 2017 & 2018 but there are no records of such transaction. This is a very serious scenario and the public demands answers. More serious is the reality that the Statutes associated with MCC continue to be drafted by the AG’s department and these dangerous Statutes must be stopped& that which has been passed needs to be repealed and more protective Statutes must be passed with inputs from a patriotic set of lawyers.

MCC is part of the US Government. Though claiming to function independently its an all US-Govt board – US Secretary of State is Chairman, Secretary of the US Treasury is the Vice Chairman, US Trade Representative, USAID, CEO of MCC and 4 US private sector members. All of whom are appointed by the US President with the consent of the US Senate. MCC is a bilateral foreign aid agency functioning just like USAID. The funds come through the US Govt. Thus, MCC $480m Compact to Sri Lanka is given by the US Govt. If Nepal MCC is part of Indo-US Pacific Strategy & essentially a component of US pivot to Asia, Sri Lanka’s MCC is definitely part of that project which involves all of US allies & a host of pro-US transnational companies. All those involved in this larger project are people who find common ground only in their greed to loot & plunder nations & their resources.

It’s important to note how this Compact has secretly come into Sri Lanka immediately after regime change in January 2015 installing a puppet President and placing a minority party as the Government until August 2015. The Compact is associated to prior funding initiatives to bind the project further.

A precondition of the MCC is a Constraints Analysis as ‘foundation’ for US investment. In March 2017 the GoSL, MCC and Center for International Development (CID) at Harvard University agreed to prepare such a report. Was $7.4m granted for this report?

The Constraints Analysis report shows that the foreigners have done surveys and statistics on Sri Lanka and know more about the country than the people or officials in Sri Lanka.Using this data, they give funding from one hand (out of money created by them) and then take back that money plus much more by demanding access to resources and assets of a country as well as change country laws to facilitate & legalize their plunder. All this is benchmarked by the “doing business report” no different to the structural adjustment programs tied to aid where a State is always asked to only reduce welfare given to the poor.

There is no free lunch echoed Mrs. B.

Prime Minister Imran Khan’s sentiments about AID being a curse is noteworthy & all Third World leaders should listen to his speech.

A study by University of Copenhagen establishes a link with foreign aid & corruption where 5% foreign aid ends up in offshore accounts. The Economist claims the World Bank tried to conceal findings by not publishing the report. https://www.occrp.org/en/daily/11665-world-bank-grapples-with-study-linking-foreign-aid-to-corruption

This certainly links to the revelation by the Gunaruwan Committee that claims $10m given by MCC in 2017 & 2018 is not found in any Government accounts. So where is this money? Who has been given this money? Has it already gone to an offshore account as the Copenhagen study implies? We want answers. 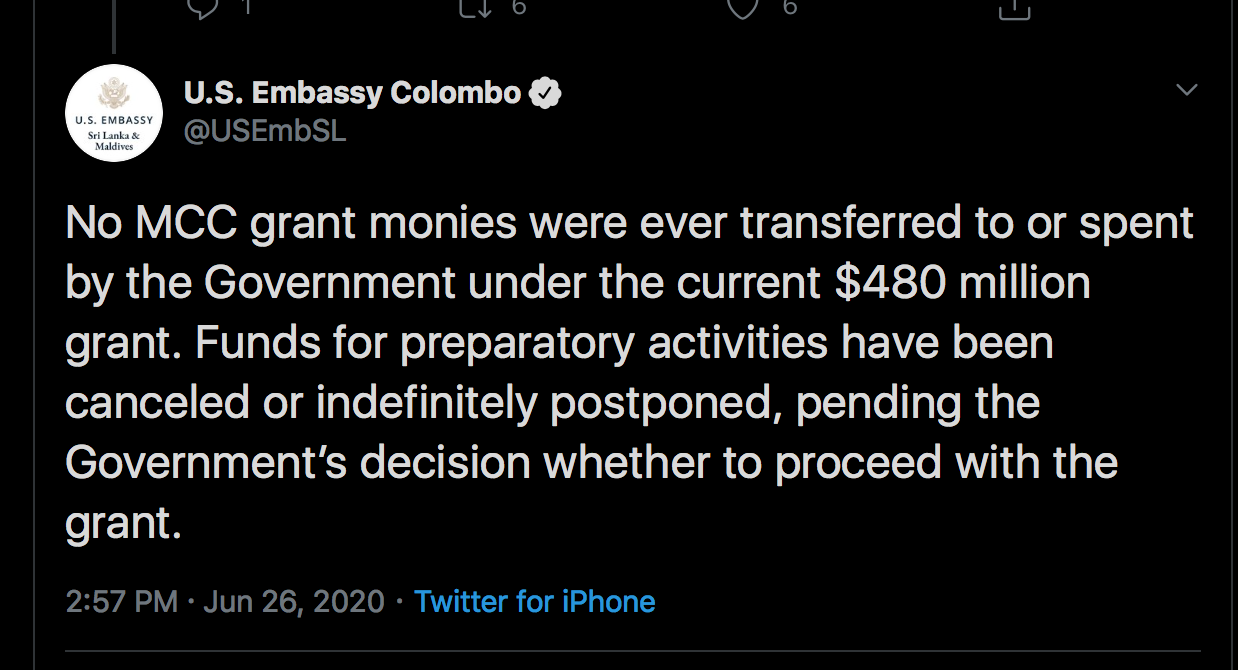 However, 2 newsclips reveal a different story.

Nevertheless, the recipients must be overjoyed as no one need pay back the money if the US embassy now says – no monies were transferred! Whoever has this $10million is very lucky!

Everyone is presuming that with the MCC Review Committee presenting their report recommending Sri Lanka’s Government does not sign the Agreement which means it is not passed by Parliament, what we are all forgetting is that unknown or ignored by all, the drastic changes that MCC want to happen in Sri Lanka is already happening.

The cake is being baked already – MCC signing & passing by Parliament was just the icing needed. But the cake is good enough without the icing.

You will next ask, how this is possible.

To understand this, it is important to be aware of the bigger picture. The efforts to change our deed system began after independence but with astute judges like Justice Amarasinghe, who rejected these proposals, these external efforts got delayed. But the attempts did not stop and every attempt has been deviously tied to aid/investment initiatives. This was how a completely foreign registration law got enacted without the public knowing of it in 1998. Title Registration Act 21 is also known as Torrens Title Registration but it was promoted in Sri Lanka as ‘bim saviya’ so that people would not question the ‘international’ component of it.

This international registration system will remove all the history of our lands embedded in the deeds that we hold as well as the sannasas and other ancient scripts to claim Temple/kovil lands.

Unlike created countries, ours is an island nation with a long and proud history. The lands belonged to the King who was custodian of the land that belonged to the People. The kings’ role was passed on to the President/Parliament/Judiciary. Every inch of land has a history to it. Land was never meant to be used as a commodity.

The resources of the land were meant to continue from generation to generation. The importance of land & our future is articulated by Justice Amarasinghe in his landmark judgement on the Eppawela Phosphate case where he annulled the US-Japan project which also had a train link from Anuradhapura to Trincomalee Port covering the same area that US/MCC –Japan has demarcated in its road-rail project.

The World Bank awarded money to the GoSL to implement ‘bim saviya’.

As per Senior Deputy Surveyor-General only 700,000 title registration certificates have been given. These 700,000 would have had their original deeds taken & replaced with a 1page certificate of Title which just has the owners name and plan.  As per Act 21 of 1998 the original deeds are to be destroyed. This 1page Certificate will erase all records of former ownership and the history attached to that land. The Senior Deputy Surveyor-General however recommends that owners retain the original deeds, extracts & certified copies of their deeds. But has this been communicated to the 700,000 people BEFORE they parted with their deeds? Can they get their deeds back or have they been destroyed as was mandatory by the Act? Are people literate enough to understand all this mumbo jumbo? Even international professors writing on the Torrens Title Registration system calls it a law fit for fraudsters.

Erasing the deed history is a fundamental right violation of the People’s sovereignty!

Is there an alternative? Yes

When people began to complain against bim saviya in particular the Maha Sangha after realizing the Temple lands would also fall under Torrens Registration system, President Mahinda Rajapakse appointed a Samarasekera Committee who forwarded an alternative. This Statute is drafted by not passed. This report must be taken & studied again by LOCAL LAWYERS not foreign consultants or local lawyers paid by foreigners.

https://www.youtube.com/watch?v=Iv_d6ISe6f0listen to former MCC Chair Hillary Clinton who says after signing MCC will be sole judge and smart power aligns to US policy of Development, Diplomacy & Defense.

What was the AG under yahapalana thinking when passing MCC agreement?

The title registration once fully implemented will also repeal Roman Dutch Law, law of prescription & judicial precedence that existed for over 150 years.

The title registration makes no difference in Private or State Land. All will be entered into an electronic land registry as per international template and identified by a 10 digit number. We will not know what was even a temple land.

Transferring a country’s entire land data to ELECTRONICS destroying the manual documents means whoever owns the data owns the future. MCC agreement says it owns Sri Lanka’s intellectual property – past, present & future. How could the AG under yahapalana government approve such a hand over of a country’s data?

The US embassy Colombo advertised for Expressions of Interest from consultancy firms to develop the E-Land Hub for the National Land Titling Program in Sri Lanka. It was the US embassy that chose the consultancy company.

That we have found ourselves in a stalemate situation is purely because politicians and officials have fallen prey to foreign funding and servility mentality ignoring the more valid and practical inputs of the BASL and Ministry of Justice to improve existing land laws.

The most dangerous aspect disclosed in the MCC agreement itself is the subtly included clause that US will stay beyond its 5 year compact if GoSL cannot carry out the project as per MCC conditions.

Politicians and officials in their short-sighted belief that funding will provide answers to all economic-ills and in a hurry to accept investments overlooking the socio-economic /environment impacts or even legal ramifications for the country have walked into too many traps, worse of which is the MCC.In so doing, they have ignored that title registration is only in English– why has no politician or public official not raised the need to have any system in Sinhalese & Tamil the language of the country? How many speak & can understand English or are literate enough to deal in computers?

While politically claiming MCC will not be signed, everyone seems to ignore that on the ground all that the MCC compact roll out requires is taking place & no politician or public official is taking action to stop the initiatives that are all part of the MCC Compact. The title registration is continuing, the cadastral mapping is continuing, the land information system is continuing, scanning of land registry books is by US company and the Statutes related to MCC and facilitating MCC are being drafted by the AG’s Dept. If MCC is not to be signed then the bigger dangers of the Statutes getting passed which are linked to MCC must be stopped and alternatives and protections placed.

E-registrar with Title registration via international law CANNOT be implemented and SHOULD NOT be implemented. A Govt that agrees not to proceed with MCC must immediately halt all initiatives and programs that were launched as part of it prior to signing.