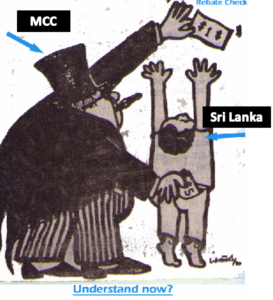 Third World country policy makers as well as their citizens need to understand that ‘independence’ for former colonies is just a cliché and nothing else. All that happened under colonial rule continues under neocolonial policies & practices. Foreign aid and investment are a key component that continues to bind former colonies with aid-interest & debt. Note how every foreign investment or international aid mechanism is always tied to a list of requirements that seek to dilute national sovereignty & people’s rights. Taking all this to account, when monetarily factored these unnoticed factors may exceed that of the aid given and be more detrimental to the nation & its people. But do policy makers address these factors before jumping to accept aid packages & sign agreements?

Since independence the international monetary organizations and the UN has pushed former colonies into changing their customary laws and practices into one that is linked to ‘international standards’ & ‘international laws’ that is easier for them to dictate and rule over.

Thus, the colonial introduced statutes and ordinances are being slowly changed by aid & UN requirements and countries are forced to comply. Most countries & their policy makers fail to see the hidden objectives. The aid agencies and UN often prepare elaborate reports & studies on countries and use that data to monopolize the aid. This was how a string of initiatives, changes to Statutes, investments have taken place in Sri Lanka. These are all aligned to continuing global hegemony of the powerful.

As Mrs. Sirimavo Bandaranaike in an interview said – there is no free lunch. Aid is often tied to the requirement to buy equipment from their countries, to accommodate and look after their staff who have to be paid big salaries and perks and all this added and reduced from the AID given ends up nothing much at all but a country ends up having to pay interest component as well. AID is certainly a curse to all developing nations.

MCC is a US government aid package linked to US pivot to Asia and linked to the newest US policy under Indo-US Pacific Strategy of combining Defense, Development & Diplomacy.

SOFA is part of the diplomacy

ACSA is part of Defense &

MCC is the Development wing.

An all-US governmental apparatus but involving transnational companies which comprise members of US allied states. In Asia, US partners with India-Japan & Australia. It is also important to note that Sri Lanka in view of its geopolitical positioning is important for US in multiple angles.

Sri Lanka is an alternative to Diego Garcia

Sri Lanka’s Ports are one of the key features of Sri Lanka though sadly no government has given enough importance to developing it as one of Sri Lanka’s key strengths.

Sri Lanka is anyone’s paradise. The climate, the scenic beauty, the environment and people are immeasurable.

It is without a doubt that US-India & China are competing for regional supremacy in the Indian Ocean. Yielding Military and Economic presence are priority options.

India’s navy opened a third air base in the far-off Andaman and Nicobar islands in 2019.

Then there is a host of transnational companies linked to MCC – all international contractors are to be paid directly by US Treasury under MCC agreement. The MCC agreement also stipulates international law. This together with the 6.8 immunity clause means that Sri Lankan law will not apply inside Sri Lanka. We do not even know the minimum or maximum non-Sri Lankan employees to be working on MCC projects once and if signed or how many are currently working on the projects that have started prior to MCC signing (ex: e-register). The role of transnational/multinational corporations often having more money than state governments also pose a risk when involved in international projects like MCC in particular linked to the 6.8 MCC clause and the 3.9 intellectual property clause. These are days where foreign companies are taking national governments to international tribunals.

Privatization of public services (possibly on the pipeline for Sri Lanka) have resulted in additional tax burdens and disconnections of water supply/electricity to consumers. Together with the host of these malpractices the transnational companies are also accused of promoting corruption – kickbacks, commissions and handouts.

These are certainly threats to people’s sovereignty

Sovereign states must learn to behave like sovereign states. Falling prey to a begging bowl mentality and subjecting generations of unborn to tax-interest burden is unfair and unacceptable. Policy makers by their very name must create policies that generate income and protect the nation’s territory, sovereignty and safeguards the People. No Government must compromise the country or its people simply to accept created money given as aid with interest while agreeing to also curtail welfare and weaken the country via legislative changes.

MCC is demanding much for peanuts. Why have policy makers not taken stock of these factors. Sri Lanka’s policy makers are paid by the tax payer to look after the interests of Sri Lanka and Sri Lankans not what satisfies external parties or to please them.

In viewing this project, every citizen must look at the bigger picture and the reason why MCC wants to have a footing in both Nepal & Sri Lanka and inspite of public sentiments against MCC, why the US & MCC are simply refusing to pack up & leave. The answer is the US strategy of 3Ds – defense, diplomacy & development.

Lawyers and Attorney General’s department cannot and should not take the agreement in its word form omitting to look into the history of the nation we propose to sign an agreement with coupled with scores of implementation letters that are not announced but binds Sri Lanka to commit to. This is no ordinary agreement and with components that are part of it already operational, it is the prerogative of the Government that promises the citizens that it will not sign MCC to stop the programs that are part of MCC and given to US companies and transfer those to local Ministries under locals to do on our terms and in compliance with local laws & systems.