How would an independent North Sri Lanka get blood for hospitals because Tamil caste compels Sinhala soldiers to donate blood? 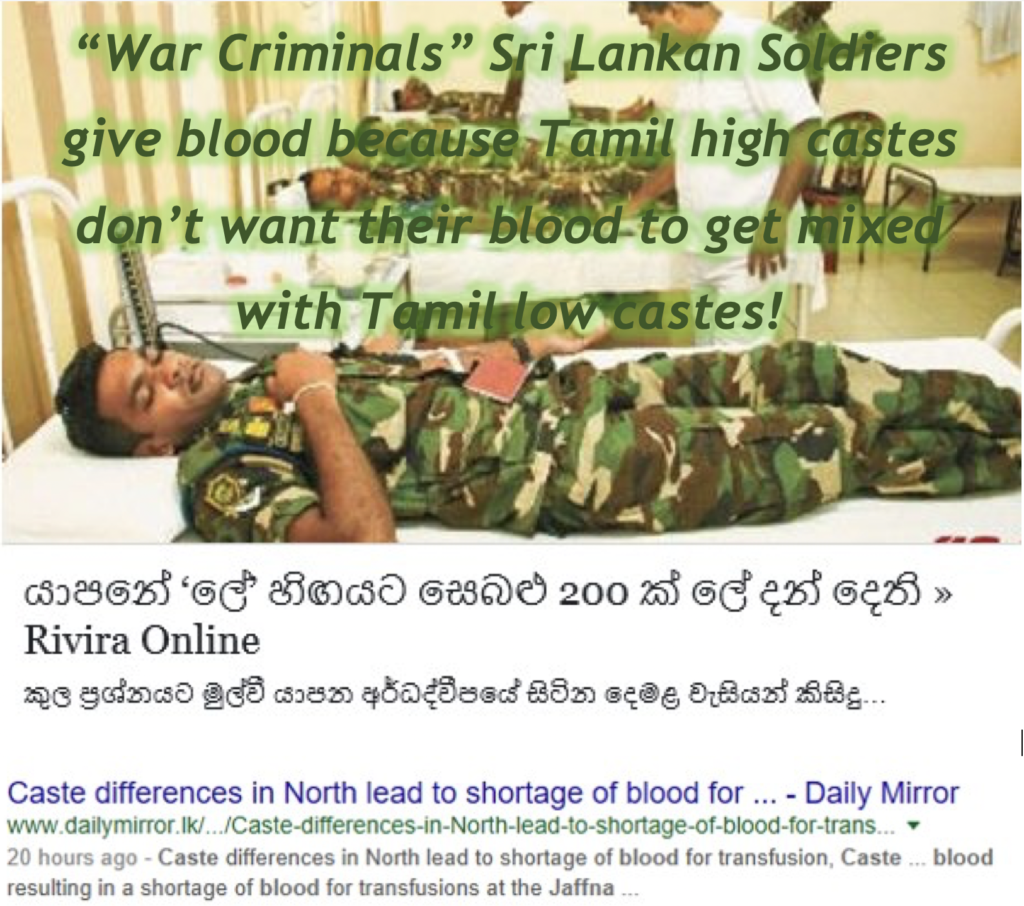 The Tamil politicians and the LTTE Diaspora may blow hot & cold, spend lavishly on propaganda projecting Sinhalese as discriminating them, committing war crimes & stoop so low as to claim genocide, but the truth of the matter is that divisions and discriminations amongst Tamils is such that Tamils will not even donate blood because of their caste. Tamil caste system is such that Tamils do not donate blood lest their “high caste” blood gets mixed with “low caste” blood. Such is the psyche that prevails. If anyone is awestruck by this, verify for yourself & accept the truth humbly & then question the unfair charges being leveled against Sri Lanka’s Armed Forces.

How many are aware that it is the “Sinhala Soldiers” of Sri Lanka’s Armed Forces that supply blood to the Tamils in the North?

This aspect has been kept well hidden & out of international domain. Tamil youth took to arms in reality to go against the caste oppression. The propaganda mechanism is such that the caste factor is nicely hidden by bringing the theme of discrimination by Sinhalese.

How many Sinhalese did Prabakaran know to hate!

Though much hype is given to the 1956 Official Language Act – not many like to admit that 8 years after independence though English was in use, less than 6% Tamils were fluent in English though 50% of clerical positions in railways, postal, customs & 60% of all doctors, engineers, lawyers & 40% of other labor force was held by only Tamils. Is this the status quo that people wanted to continue marginalizing everyone else?

The Tamil high castes/class even sailed to UK to prevent the Prevention of Social Disabilities Act of 1957 – a year after the Official Language Act. This Act enabled low caste Tamils to enter schools, kovils that had been denied to Tamils by Tamils. The caste factor is the reason to object to the 1973 Standardization Act which enabled low caste Tamils to enter university.

There have been more caste riots amongst Tamils than the 3 examples of riots that are cited by Tamil politicians & LTTE Diaspora.

Even post-2009 every time there is a shortage of blood, several divisions of the Armed Forces sent volunteer soldiers to donate their blood.

Let’s look at another angle.

Attorney Prashantha Lal De Alwis’s Human Rights: Right vs Duty an analysis of the Humanitarian Operation in Sri Lanka – a Buddhist Perspective brings out facets of Buddhism that many of the anti-Buddhist promoters are advised to refer to.

As he correctly states, the Sri Lanka Armed Forces were opposing an armed LTTE who were holding hostage/human shields Tamil civilians. Those that attempted to flee LTTE were shot dead, those that fled LTTE & came to Sri Lankan Army were given shelter, food & medicines & the injured were treated.

How many countries where their armies are waging wars, provide food & essentials to the civilians that were held in enemy controlled areas? Sri Lanka’s Govts did & this highlighted the Buddhas principles of Karuna & Metta (kindness & compassion)

Contrary to what most people think, Buddhist philosophy allows self-defense.

The right of self-defense encompasses the right to defend another as well.

It is prudent to recall an incident at a shelter where a LTTE terrorist disguised as a civilian blew herself up killing armed forces personnel & even Tamil civilians. Aerial footage also showed LTTE using guns to prevent Tamil civilians escaping LTTE. It was to protect these Tamil civilians that over 6000 soldiers perished during the final phase of the war.

The LTTE Diaspora are screaming rights – but why have they forgotten DUTY? What did LTTE do to safeguard the lives of Tamil civilians. They claimed to be the sole representative of the Tamil people – it was therefore LTTE’s duty to safeguard them instead LTTE used Tamils as hostages & human shields or even force them to use arms & ammunition with little or no training. LTTE failed to fulfill its duty under natural law. It was the Armed Forces that brought to safety some 300,000 Tamils. Let no one forget this.

The Sri Lanka Armed Forces have been consistent in their humanity. They not only saved Tamil civilians from terrorists but post-2009 did a yeomen service rebuilding the North & East as well as came to the forefront during natural disasters.

The Tamil politicians & LTTE Diaspora watched as the Armed Forces built railway lines that LTTE blew up & destroyed, built houses & toilets for their people & after these were done, they came out berating them. How shallow can people stoop to.

When Jaffna was devastated by floods in November 2015, it was not the LTTE diaspora or the Tamil politicians who assisted the civilians by providing food, medical essentials but the Sri Lanka Armed Forces. They cleared wells, drains and came to the rescue of Tamil civilians.

Donation of blood is not in the job profile of the soldiers, but their humanity & compassion is such that they are ever ready to defend the nation & its people, no matter what.