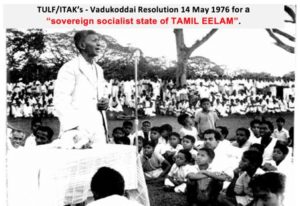 2008 was significant for several reasons. LTTE was defeated in the East. Sri Lankan Military was moving to liberate the North. TNA that had been virtually functioning as LTTE’s political wing realized that its military arm would soon be permanently clipped. The next strategic & tactical maneuver was to internationalize what LTTE sought with gun & to do so ITAK needed to change its aims & objectives in its constitution given that by virtue of 13a Sri Lanka already had a federal system within a unitary constitution. ITAK decision was to amend its 1949 original constitution replacing ‘Shamashthi’ with ‘Innaipatchchi’ & thereafter endorse the 1976 Vaddukoddai Resolution for a sovereign socialist state of TAMIL EELAM”. Until such time ITAK/TNA re-amends its constitution we have to presume it is working towards fulfilling the Vaddukoddai Resolution quest for ‘Tamil Eelam’ and we should discard their verbal statements in toto.

Firstly, in 2008 ITAK decided to amend its 1949 original constitution replacing ‘shamashthi’ with ‘innaipachchi’ immediately after LTTE was defeated by Sri Lanka’s military in the East, liberating the Eastern province of LTTE.

The 1949 ITAK constitution in Tamil envisaged a federal system of governance, used the Tamil word ‘shamasthi’ to connote federalism.

Secondly, ITAK after amending its original constitution, also included a clause that endorsed the 1976 Vaddukoddai Resolution.

The importance of the endorsement of the Vaddukoddai Resolution by ITAK & its ramifications for Sri Lanka CANNOT be understood without being aware of the demands made by the Vaddukodai Resolution.

‘This convention resolves that restoration and reconstitution of the Free, Sovereign, Secular, Socialist State of TAMIL EELAM based on the right of self-determination inherent to every nation has become inevitable in order to safeguard the very existence of the Tamil nation in this Country….And this convention calls upon the Tamil Nation in general and the Tamil youth in particular to come forward to throw themselves fully into the sacred fight for freedom and to flinch not till the goal of a sovereign socialist state of TAMIL EELAM is reached’

Therefore, when ITAK amends Clause 17 (D) of the 1949 ITAK Constitution on 24th April 2008 & 3 August 2008 approving ALL RESOLUTIONS & ACTIONS by TULF & ITAK on 14 May 1976 it means ITAK approves TULF’s quest for a sovereign, secular, socialist state of Tamil Eelam. ITAK unanimously upheld this in 2008.

Notice how a flood of LTTE fronts also began blooming immediately before or immediately after 2009 – these foreign LTTE fronts were all basing their aims & objectives on this TULF Vaddukoddai Resolution of which ITAK was a signatory in 1976.

Starting the process of writing the Constitution of Tamil Eelam, based on the principles enunciated in 1976 Vaddukottai Resolution, Interim Self-Governing Proposal (ISGA), and the Tamil Eelam Freedom Charter and involving Tamils all around the world”

The 2008 amendment to ITAK constitution & endorsement of Vaddukoddai Resolution is important as it came at a time when the LTTE’s political wing, the TNA knew that it could no longer depend on the military arm to illegally gain territory.

What ITAK probably next decided upon was to internationalize the demand for separatism through the amended aims & objectives of the constitution.

By amending ITAK constitution in 2008 & endorsing TULF/ITAK’s 1976 demand, ITAK is reconfirming it is working towards that goal. An amendment is important by virtue of the INTENT that it advocates. This is what makes ITAK amendment of importance in the present political discussion & constitution making.

When Vaddukoddai Resolution virtually asks youth to take up arms

TNA is an alliance created by LTTE in 2001. Its election manifestos of 2001, 2004, 2010 & NPC manifesto for 2013 elections unabashedly declares LTTE as sole representative of Tamils.

Anandasangaree in a letter to Indian PM Modi in 2014 too reconfirmed TNA as a LTTE proxy.

Tamil organizations got together and resolved on May 14, 1976 to establish a sovereign independent Tamil Eelam based on our inalienable right to self-determination.”

Tamil People are entitled to the right of self-determination”

ITAK and the other Tamil parties came together under a banner called Tamil United Liberation Front (TULF), and in 1976 passed a resolution calling for a restoration of our lost sovereignty in the background of the continued denial of the right of the Tamil People to self-determination” TNA manifesto 2010

‘Our expectation for a solution to the ethnic problem of the sovereignty of the Tamil people is based on a political structure OUTSIDE that of a UNITARY GOVERNMENT, in a UNITED SRI LANKA in which Tamil people have all the powers of government needed to live with self-respect and self-sufficiency’

‘Tamil United Liberation Front, of which our party was a member took the historical decision to establish the separate government of Tamil Eelam in 1976’

our right to determine our destiny to ensure self-government in the Tamil Speaking North-East of the country within a united and undivided Sri Lanka.”

Devolution of power on the basis of shared sovereignty shall be over land, law and order, enforcement of the law so as to ensure the safety and security of the Tamil People, socio-economic development including inter-alia health, education, higher and vocational education, agriculture, fisheries, industries, livestock development, cultural affairs, mustering of resources, both domestic and foreign and fiscal powers.”

Tamils did not ask for a separate state in 1948 when colonial British gave independence.

Ironically it was ITAK founder Chelvanayagam’s son-in-law A J Wilsom who drafted the 1978 Executive Presidency constitution.

All of their demands have a connection. Terms used are virtually same. It always follows a formula of – ask a little now & keep demanding little more later. 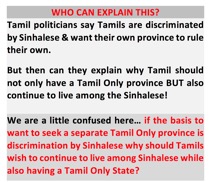 Their statements & unsubstantiated demands drummed unfairly across the world speaks volumes of the lies that have been propagated over the years & continues still, challenged by only a handful while fear of being labelled & called racists silence the rest.

Let no one forget that it is the goodwill of the Sinhalese that are stopping them from demanding ownership of the entirety of the island given that it is their civilizational heritage that built the nation. The moment that the Sinhalese start presenting their demands for Sinhala Homeland the entire lies surrounding the Tamil homeland myth will explode.

Until & unless ITAK removes this aim & objective & clearly redefines ‘shamasthi’ & ‘innaipatchchi’ ITAK/TNA should not have anything to do with drafting a new constitution for Sri Lanka. 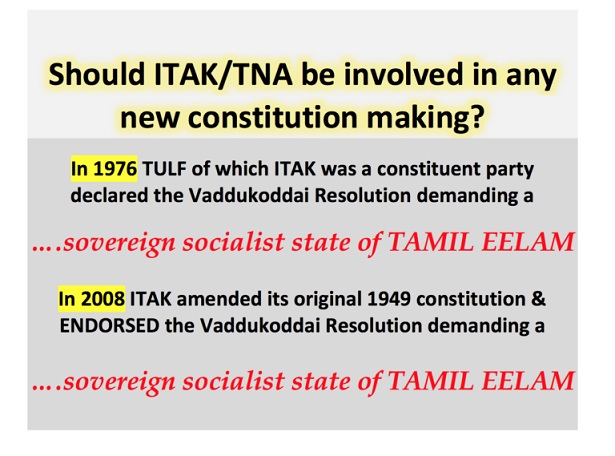 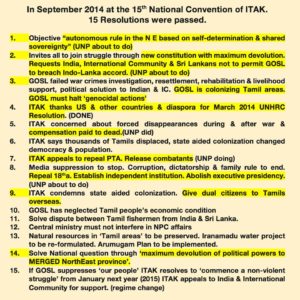