Is a constitutional coup brewing to reconvene Sri Lanka’s Parliament?

The calls to reconvene Parliament come from the same coterie of people who orchestrated regime change in 2015 capitalizing on a Presidential Election victory to bring to power a minority UNP government and place Ranil as PM without removing the sitting PM. A hurriedly cobbled ‘national government’ was created to dish out various roles to their co-partners who were made Opposition Leader and Chief Government Whip. Little needs to be said of the Speaker’s role in the drama that unfolded. These actors used every trick in the book to delay elections and prevent holding of elections for 3 years. The Election Commission showed little teeth in upholding the people’s right for elections throughout and when the former Speaker now declares I am bound to uphold judiciary’s decision’ that’s like the cat popping out of the bag before schedule! The spilling of intent warrants the government to be alert to all avenues this bandwagon is likely to take and the influences they are likely to make tapping their powerful friends overseas. The drawback this time may be the difficulty in handpicking some for overseas jaunts in view of covid-19. Is a constitutional coup brewing to reconvene Parliament? Are those that filed cases against Oct2018 dissolution of Parliament about to do a repeat performance!

When you see a pattern in the chorus demanding reconvening of Parliament, it is important to wonder, why! The calls to declare null & void the President’s dissolution of Parliament and reconvene Parliament is certainly not to do any favors to the People. We saw that when the same parties objected to the former President dissolving Parliament, declaring elections and allowing the People to vote who they wanted. The one’s that objected to that decision and dashed to file against the dissolution are the very same objecting to the dissolution by the current president. In both cases the reason for their knee-jerk reactions was to somehow ensure their boys and girls remained in power and inside Parliament. By their actions they impeded the people’s right to exercise their vote and decide who they wanted to elect and return to Parliament.

In October 2018, the shock came when the then President suddenly removed the PM. But the ‘democracy upholding’ PM refused to vacate and was encouraged not to do so by foreign envoys regularly visiting him to provide free international advice.

The irony & hilarious aspect was that among the 10 petitioners demanding re-instating the Govt of Ranil as PM was the country’s Opposition (TNA) and the Chief Govt Whip’s Party (JVP), SLMC, ACMC, TPA as well as the supposedly unbiased civil society entities CPA and even the election commission member Hoole.

The constitutional crisis in Oct2018 came about following the complications, contradictions and confusions by those that drafted the 19a.

Hailed as the world’s best constitutional amendment the 19a clipped powers of the President to summon, prorogue, dissolve Parliament by setting a limit of 4 ½ via amendment to Article 70(1) but then felt sorry for him and added new Article 33(2) C giving him the same powers in faded format! 19a was an attempt to slyly turn the title of President to a ceremonial role without the concurrence of the People and transfer powers to the PM.

The crux of UNP-TNA-JVP & NGO argument against October2018 dissolution and to protect the Govt they belonged to and the 19a they wrote was that new Article 70(1) ruled over Article 33(2) c.

This is one of the architects of the 19a – surprisingly, he too is a dual citizen now gone to live in Switzerland and before leaving condemned the 19a too! 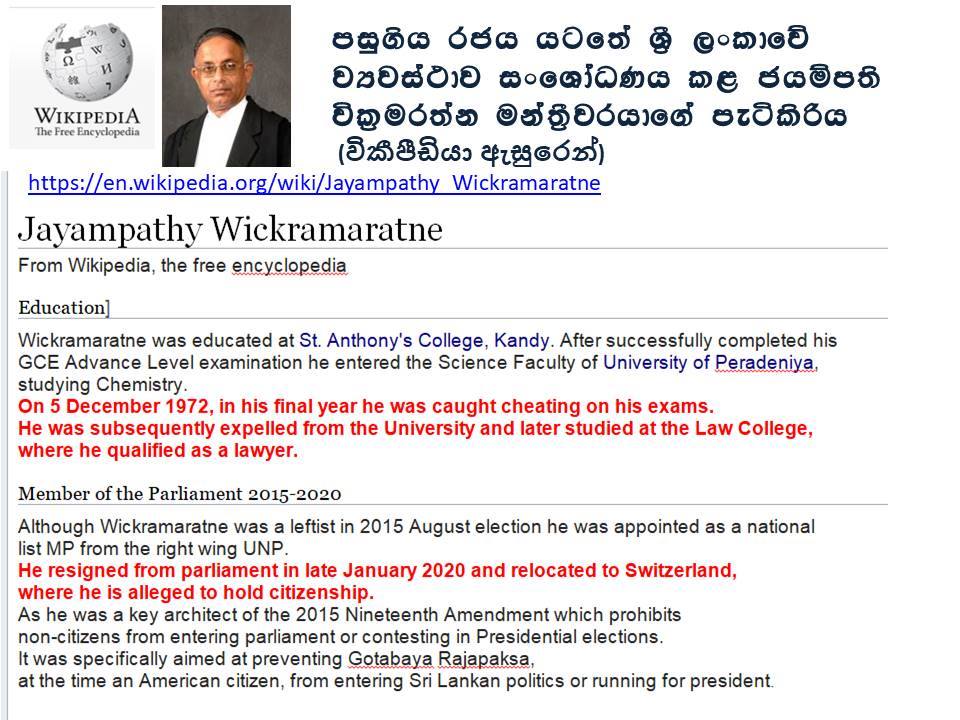 Therefore, the calls to reconvene parliament jolts our memories of Oct2018 court case decision, which to the surprise of all, went in favor of the petitioners against allowing the supreme will of the people to prevail.

The decision did raise many a question in particular the unanimous vote which was viewed with the startling revelations by MP Gammanpila in Parliament regarding a voice clipping in his possession that sought to influence the decision and even judgementshttp://www.adaderana.lk/news/55005/us-exerted-influenced-on-sl-judiciary-gammanpila?fbclid=IwAR1TL2y-CwLgHRDbG3ZY9HZ-5SUuEVid0uLa_7QFopqfJihmGokAQ5Gm_Rk 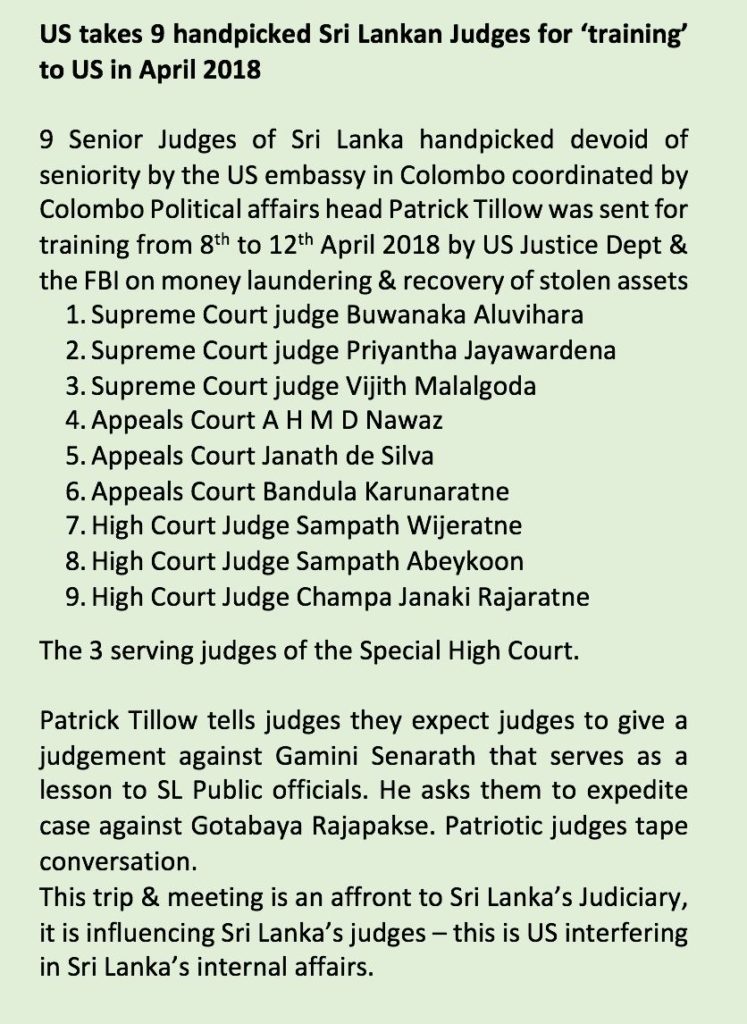 It is in this backdrop and within this background context of characters that we have to take stock of the current situation. These players are either holding roles or want to return to their roles but they were all part of the Jim band that totally ruined Sri Lanka since 2015.

The PM’s statement on 18th April quite rightly pointed out how uncooperative the Opposition had been in helping support the Government with covid-19 and blocking every effort by the Government, therefore those that are appearing on youtube & talk shows claiming Parliament has to reconvene to lend support & to pass laws is all humbug and meant only to satisfy the international gallery.

What could Sri Lanka’s Parliament possibly do that is not currently being done by the Health Services and Armed Forces & Police involved in hands on covid-19 operation by simply reconvening Parliament & spending Rs.4.6million for a day’s Parliamentary sitting? The answer automatically comes in just picturing the scenario. Between January & August 2019, Parliament had convened 70 times and out of the 225 Members only 51 attended over 60 sessions.

The Parliament was dissolved simply to enable the people to cast their vote and elect a new team of people. Let’s not forget the dissolved Parliament is full of people who were rejected by the People in the August 2015 elections and were brought in through the back door. No rejected contestant can be brought to Parliament via backdoor through the national list.

In Oct2018 the reconvene Parliament wanted to return Ranil to throne, what do the same players want this time round?

The current calls to reconvene Parliament is to undo a major faux pas that has arisen as a result of submitting separate nominations. With UNP still to announce who will lead UNP for the General Elections 2020, UNP-Ranil faction handed nominations separately and SJB-Sajith faction also handed separate nominations to contest all districts. What is likely to ensue from this is nothing but hara kiri and UNP votes is likely to get split and UNP may even lose its bloc vote. Having calculated the likely risk, the teams are obviously frantically pursuing all options to cancel nominations that closed on 19th March 2020. By reconvening Parliament, the nominations that closed will be null & void and if President again dissolves Parliament fresh nominations will be called and SJB will get buried and Sajith will return to UNP to contest under UNP.

How can they build a case? For starters the Election Commission has declared a date that is inconsistent with the provisions that allow him to declare a new date if the date declared by the President is cancelled.

So the elections commissioner has erred in the issuing of dates which he needs to revisit & correct, the Elections Commission is fully aware that Sri Lanka is experiencing a situation not experienced previously. However, even in the thick of terror Sri Lanka has held elections with big turn outs.

South Korea held elections in April 2020 recording 66% turnout with 44m going to vote and the ruling party recorded the highest seats since 1987. South Korea has over 10000 covid-19 cases and 240 deaths. US is also going to polls in November and already primaries are being held. US has close to 1m covid-19 cases and over 53,000 deaths!

With everyone realizing that they need a change in mindset post-covid it is essential that the politicians also adjust their ways and depart from the bad behaviors that have become part and parcel of their lifestyle as a politician. This is applicable to politicians/political parties of all colours. The corrupt and incompetent manner that was a hallmark of rule since 1978 can no longer continue.