The UN was created in 1945 following the end of World War 2 promising to ensure no future world wars, to respect individual state sovereignty and to not interfere in internal affairs of sovereign states. Since 1945, only 10 countries around the world without a conflict and countries facing conflicts are as a result of proxy interventions and incursions. Within the UN itself mass corruptions and biases go ignored and whistleblowers chastised and cornered. It is plain to see that while democracy dictates requirement to elect governments & representatives and invisible and sinister group of people actually rule the world. These notions are purposely tackled by utilizing all forms of communications that these sinister groups control and manipulate to silence people. Thus slogans of ‘conspiracy theories’ divert people’s attention from piecing the puzzle of truth together. It is in this light that we look at the covid global epidemic.

The UN wishes to create a ‘New World Order’ with a ‘One World Government’ by 2030 as part of its Agenda 21 Goals set out in 1992. These were all incremental “CHANGE” goals to reach the ultimate One World Government goal. These include One Government, One Cashless Currency, All Schools, Colleges, Universities under One & end to single-family homes. The ultimate goal is for a handful to secure title over the world’s resources & assets. The clue comes in mention of ‘central banking’ in reference to capacity-building in developing countries, but there is no restrictions to privately owned property though nothing is to be ‘mass owned’ – or loosely translated the objective is to ensure nothing is mass owned.  Just go to the UN website, access the relevant documents and find out for yourself.

The 1992 New World Order listed terms “one world”, “currency” “military” “family”, “5G” “private transportation” “air travel” “synthetic drugs” are not mentioned in the 2030 Agenda. What is a relief is that neither Agenda 21 nor 2030 Agenda are legally binding. This is probably why the UN system forces countries to sign to various internal programs that plugs these specific agenda items so taken together countries end up virtually endorsing Agenda 21 & 2030 without their knowledge! How many country advisors are bothered to compare notes and put the puzzle together?

Rule of One by One – is similar to the Rule of the Empire during colonial times where a handful ruled with iron fist and human rights was dictated & determined by them as were the laws & justice that prevailed. In short it was one-sided human rights & justice. Are we returning to that era?

We are in 21stcentury – things are far different from 15thcentury. People are informed & more aware of happenings around the world & more vocal as well. So to bring 7billion population under an Empire rule something major is required. Was Covid that ingredient?

Dr. James Fetzer’s “proof that the pandemic was planned & with purpose” is an eye opener. https://madisonarealymesupportgroup.com/2020/09/30/proof-that-the-pandemic-was-planned-with-purpose/He refers to a shocking statement made by 500 medical doctors in Germany. “The Corona Panic is a play. It’s a scam. A swindle. Its high time we understood that we’re in the midst of a global crime’. 600 medical doctors from Spain too voiced similar sentiments. “Covid-19 is a false pandemic created for political purposes. This is a world dictatorship with a sanitary excuse”. In the US too a documentary titled PLANDEMIC is supported by over 27,000 medical doctors.

That this article is controversial in nature has had the infamous ‘Fact-checkers’ to give their opinion –  https://digiteye.in/principia-claims-the-coronavirus-pandemic-was-pre-planned-and-with-purpose-fact-check/though all types of jargon is used, there is no clear statement to DENY any of the issues raised in Dr. Fetzer’s article and the references he quotes.

What about thousands of people dying every day? We know this is happening.

What do these doctors know, that we don’t know?

Were test kits exported to US, EU, China & other nations 2years before the outbreak? Doctors should know. 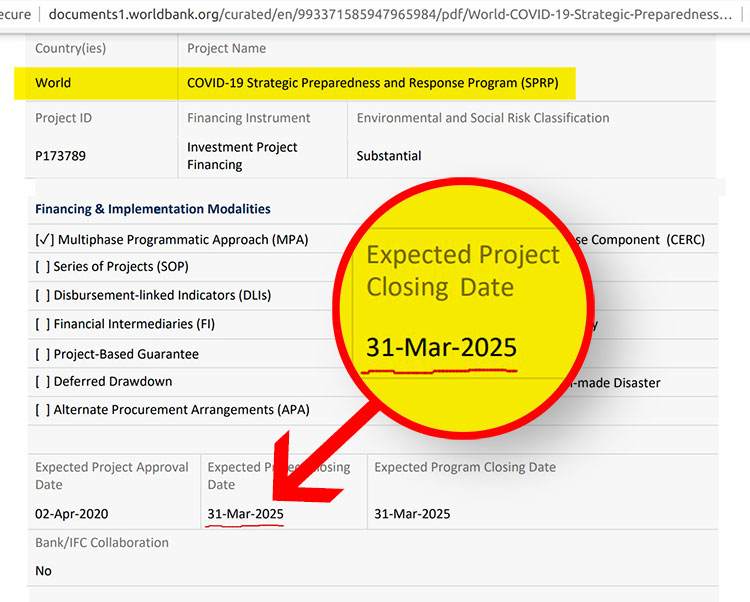 Dr. Fetzer’s article also claims that Anthony Fauci, Director of the National Institute of Allergy and Infectious Diseases (NIAID), in 2017 guaranteed a pandemic within 2 years. 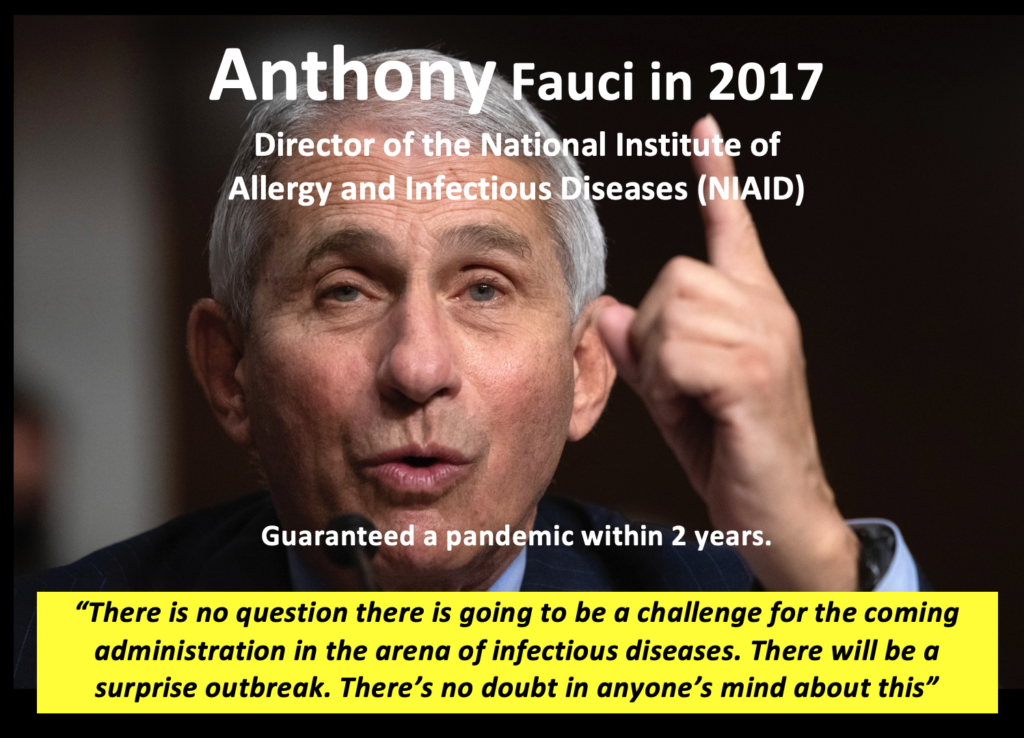 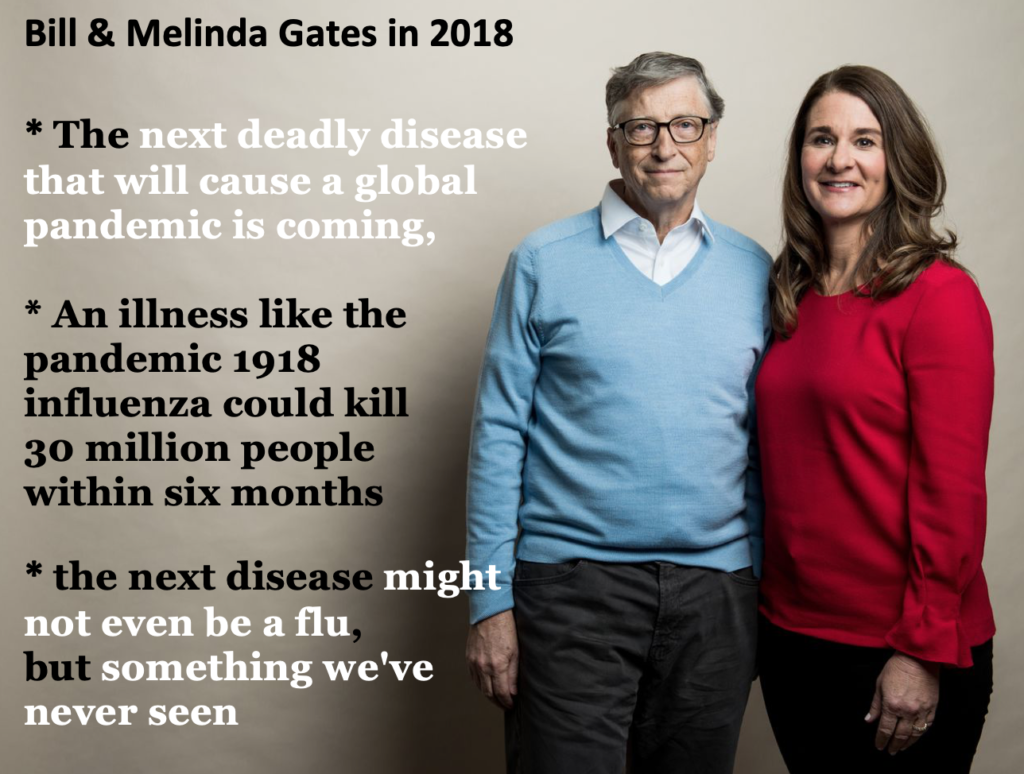 Dr. Fetzer’s article refers to Bill & Melinda Gates claiming the world is densely populated. However, 7billion people live in a world in which 70% is covered in water.  Only 10% of Earth is inhabited by humans.

The Global Preparedness Monitoring Board released “A World at Risk” in September 2019 stressing need for preparedness for a coronavirus outbreak.

https://apps.who.int/gpmb/assets/annual_report/GPMB_Annual_Report_English.pdf(full report) The September 2019 report cover has a picture of the virus and people wearing the masks that we are wearing now! 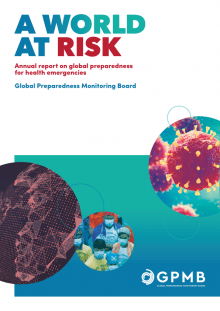 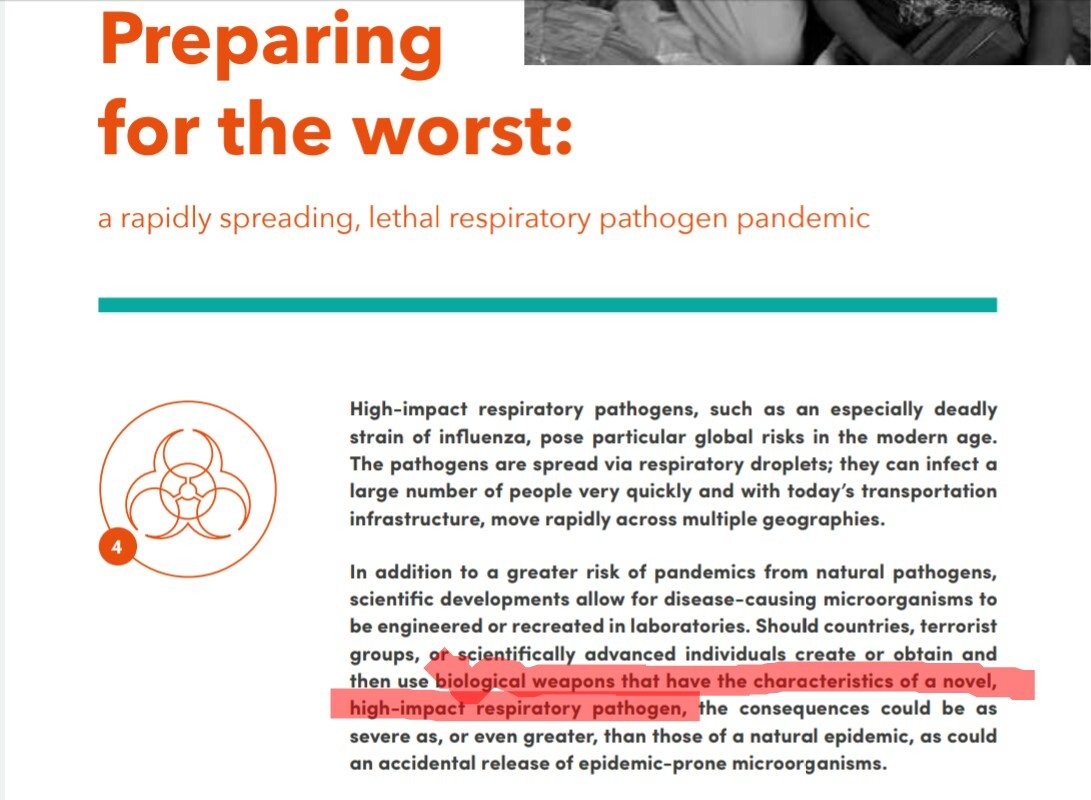 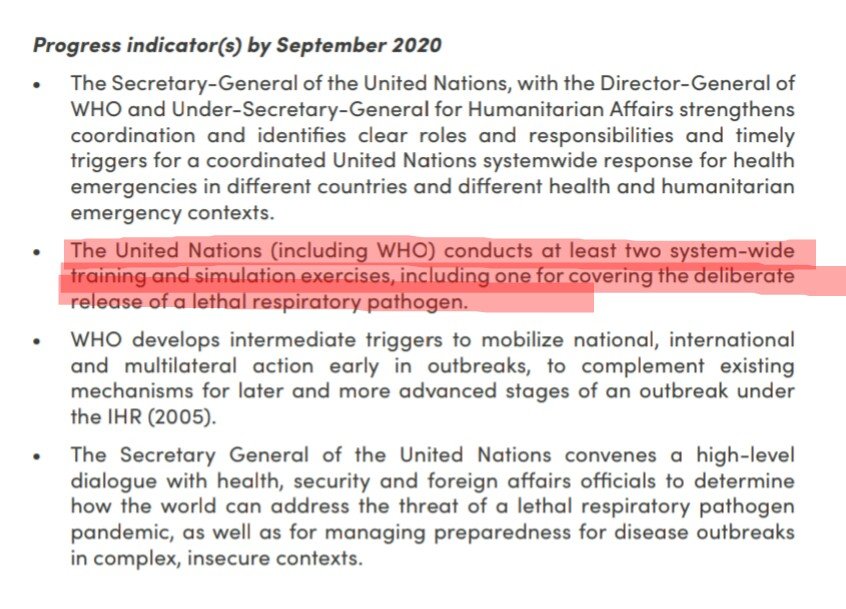 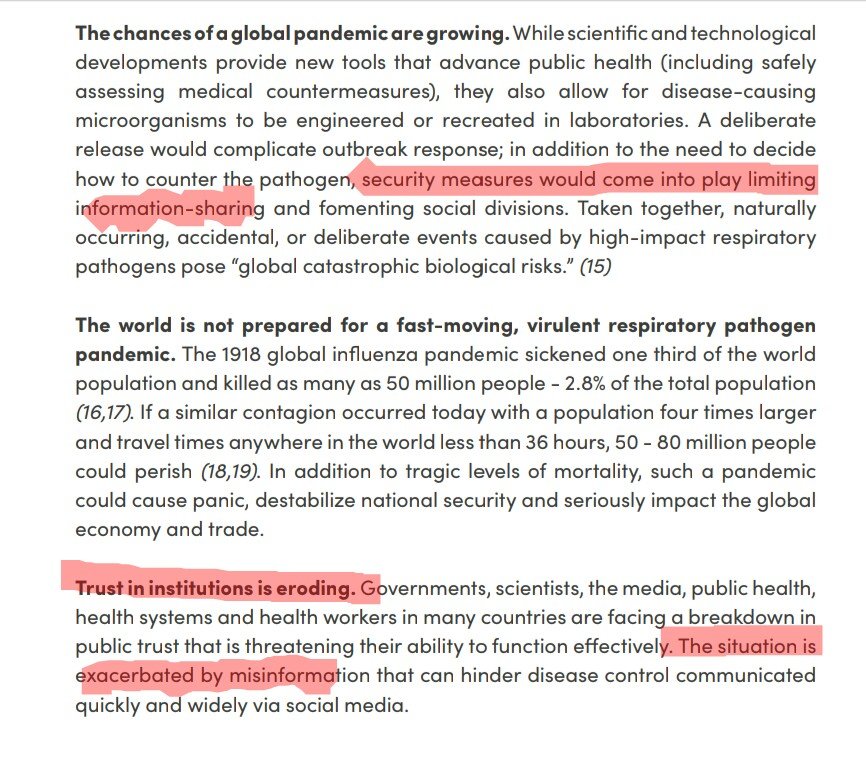 Have they been deliberately releasing lethal respiratory pathogens to the world’s populace? 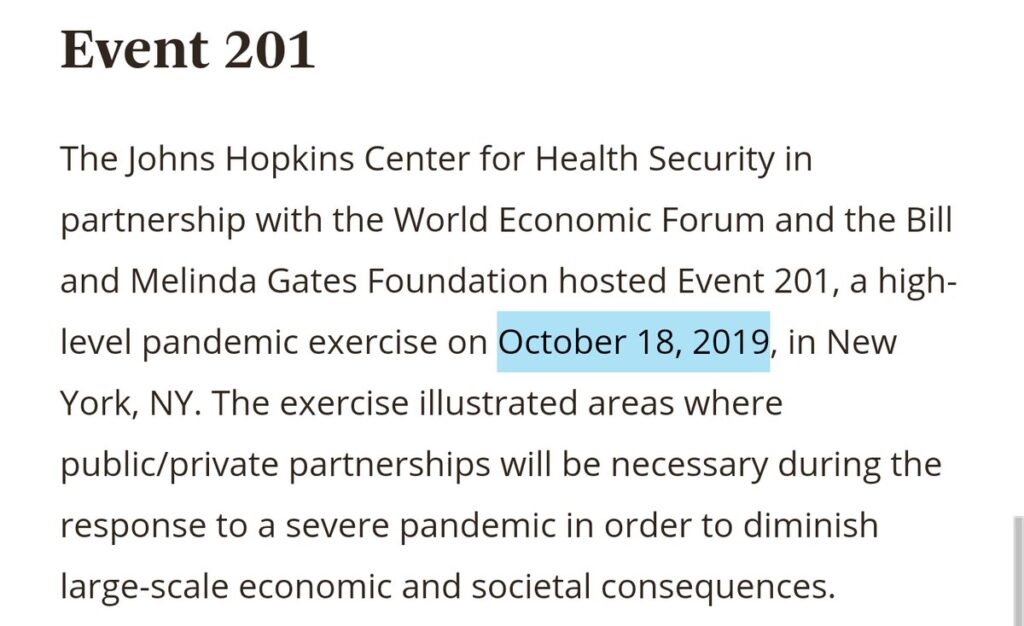 Event 201 concludes that all humanity must be vaccinated. Is this what is now being rolled out?

If the virus was “prepared” prior to the corona virus outbreak, was the vaccine also “prepared”?

More than being bothered about the people planning these “outbreaks” we must now wonder what these ‘vaccines’ are actually ‘planned’ to do for the ones who have taken them.

Predicting an epidemic killing thousands, boasting about selling vaccines – what should we deduce?

The Institute for Disease Modeling (part of Bill & Melinda Gates Foundation) in 2018 released a video “A Simulation for a Global Flu Pandemic” showing a flu virus originating in Wuhan, China & spreading all over the world. Is this a coincidence? https://www.youtube.com/watch?v=AuBDP1Q8__0 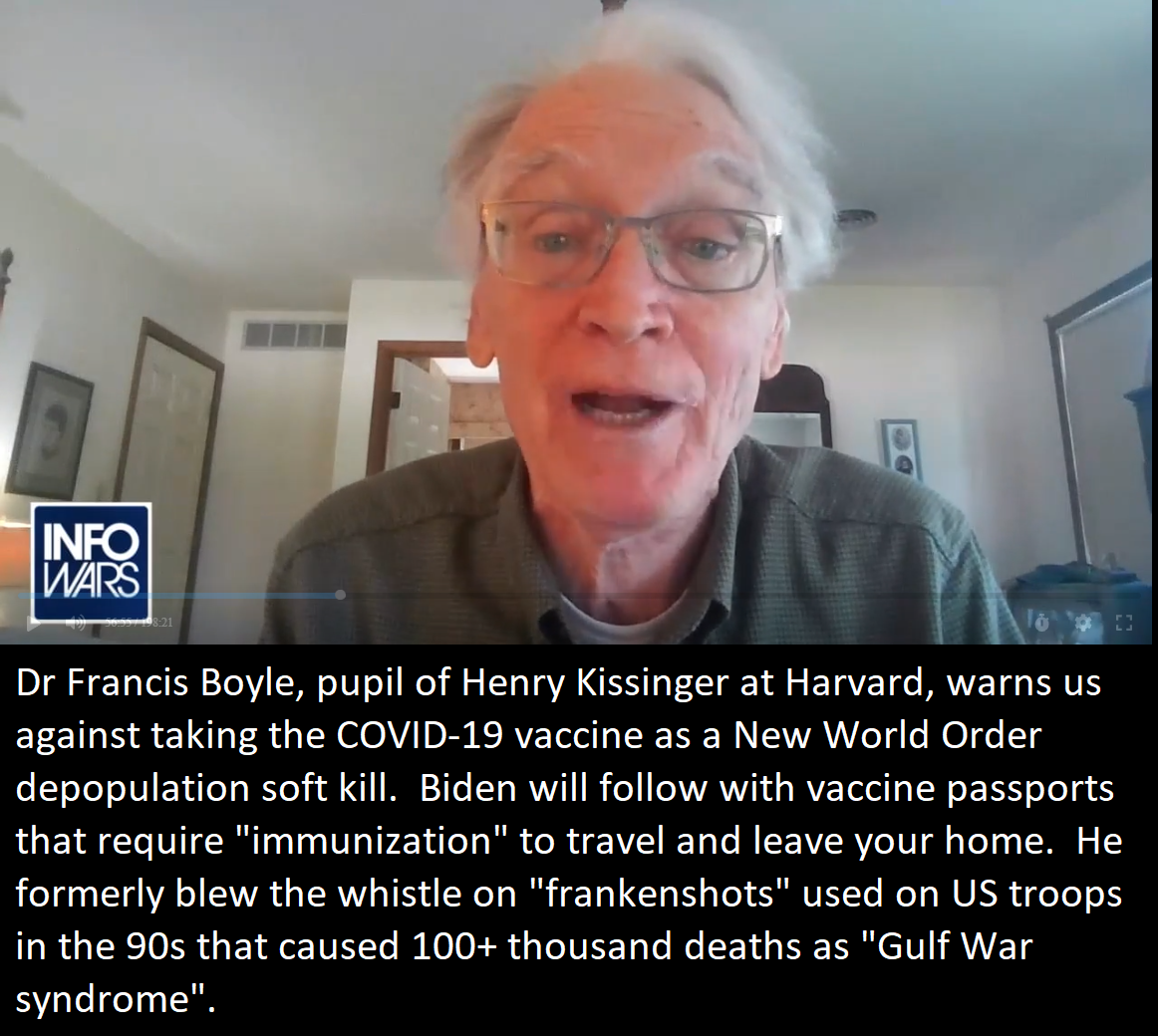 2017-2018 saw a lot of films coming out about humanity, diseases, pandemics etc

Dead Plague shows a global pandemic with hydroxychloroquine given as cure!

The film Contagion made in 2011 shows how long the project has been in progress – https://www.youtube.com/watch?v=O5V-UrQHwSg

Those that rule the world also rule our communication channels so it is no surprise that they enjoy using films to predict their plans. A worldwide lockdown was predicted in 2008 according to Dr. Fetzers article.

‘They will stop at nothing to complete their toolkit of control. One of the things that had been missing from their toolkit is quarantines and curfews. The plan is to get hundreds of thousands of people infected with it and create the next phase of control.’

In 2010 the Rockefellar Foundation released a report titled “Scenario for the Future of Technology & International Development” – read this report it has predicted exactly what we are currently going through. https://nebula.wsimg.com/f02ee252d0439ad252da1e628299c091?AccessKeyId=D40106E1331C24ABD7C3&disposition=0&alloworigin=1 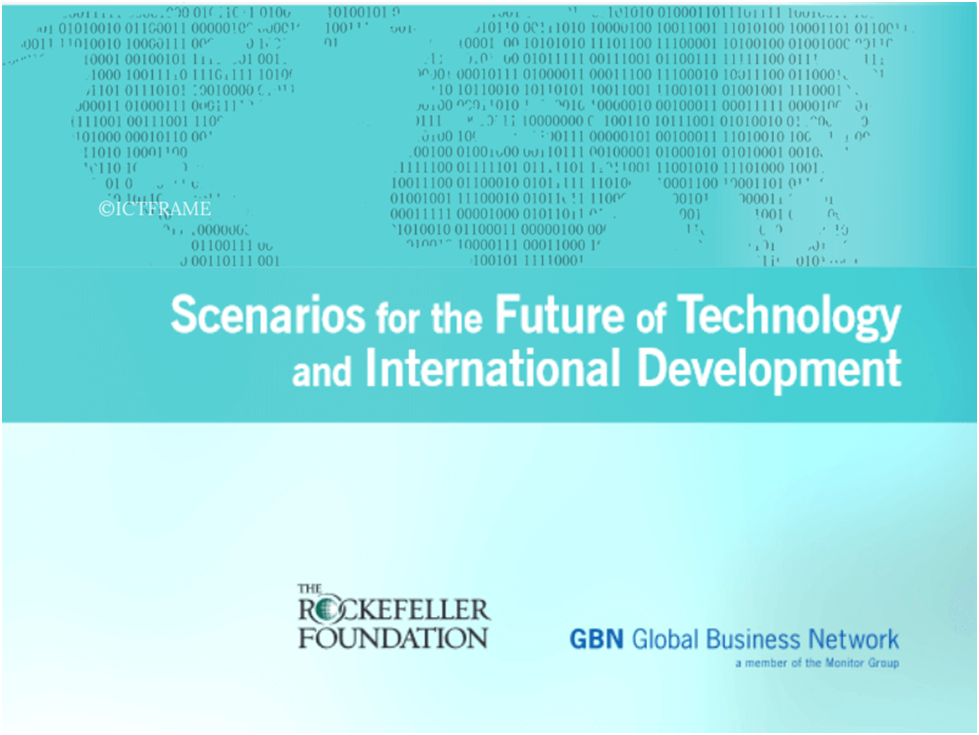 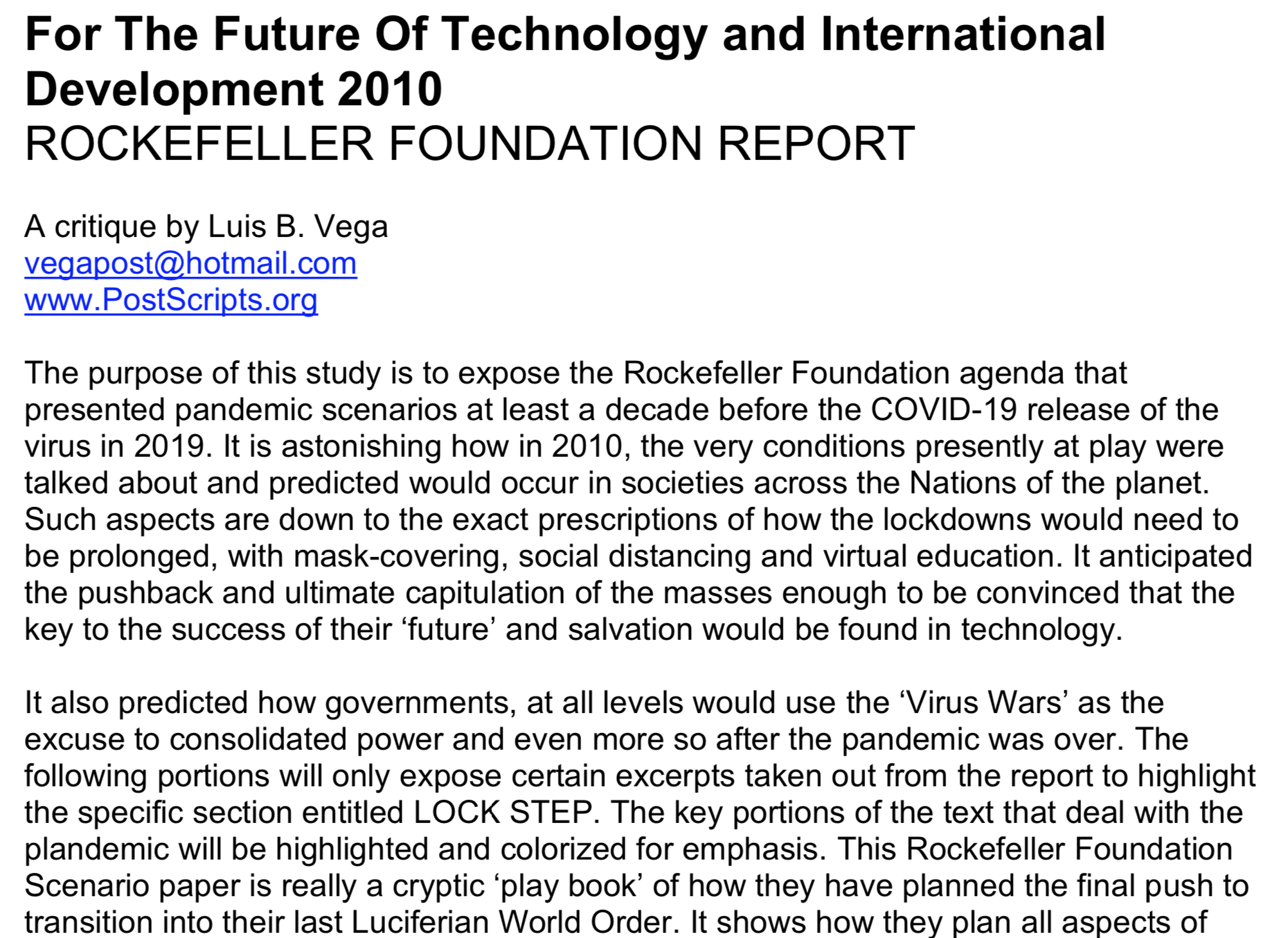 In 2010 the report predicts the responses by US & China in 2019 & beyond.  What is also predicted is totalitarian control. This is what we should all worry about.

You have to wonder if the present ‘strikes’ across Sri Lanka has a underhand purpose fitting into this planned project?

The objective of the pandemic is two-fold. Cull population as much as possible & control the living wherein they handover their freedom to feel safe & healthy (both of which is unlikely to happen)

There’s more shocks awaiting – according to Dr. Fetzer there is a handbook for global control already prepared by Rockefeller Foundation “National Covid-19 Testing Action Plan” on how to control the people. 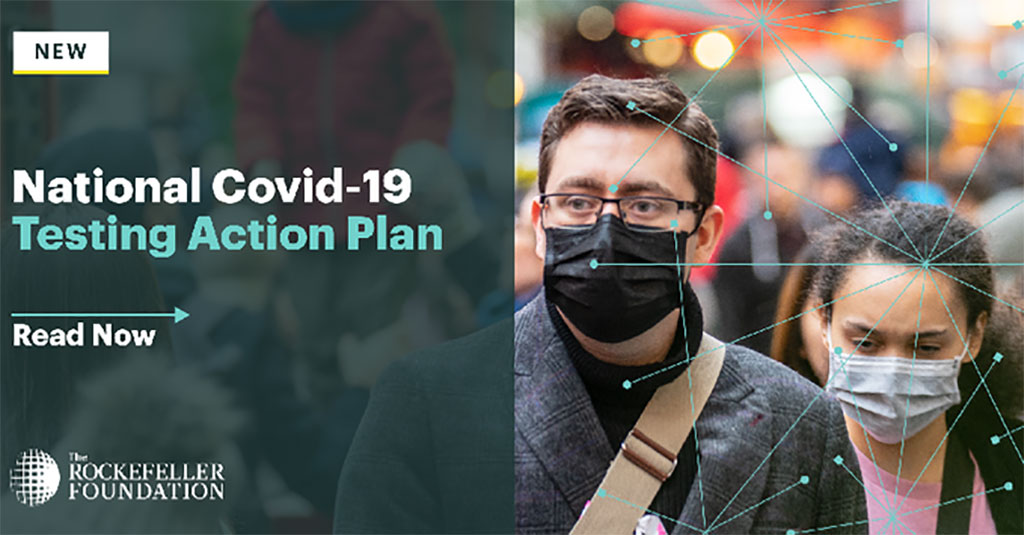 Interestingly former US President Bill Clinton and Governor New York Andrew Cuomo held discussions on how to set up a large control system to check their contacts & to have the army control this system. https://abc7ny.com/mike-bloomberg-tracing-army-coronavirus-testing-and-new-york/6122098/

How valid is Dr. Carrie Madej’s claims of a plan to inject humanity with dangerous Covid-19 vaccines to reprogram our DNA creating hybrids easier to control & enabling handlers to control us through artificial intelligence via digital vaccine ID (Dr. Madej incorporates 20 years of study into her theory – anyone challenging her claim must provide substantial evidence against her claim)

Dr. Fetzer’s article takes us back further to a book “Committee of 300” by former CIA Dr. John Coleman. 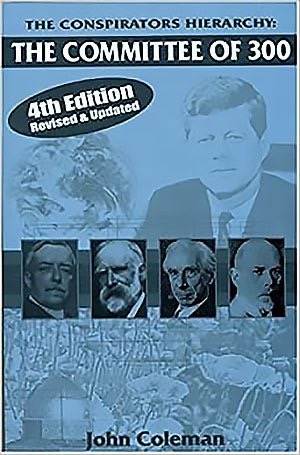 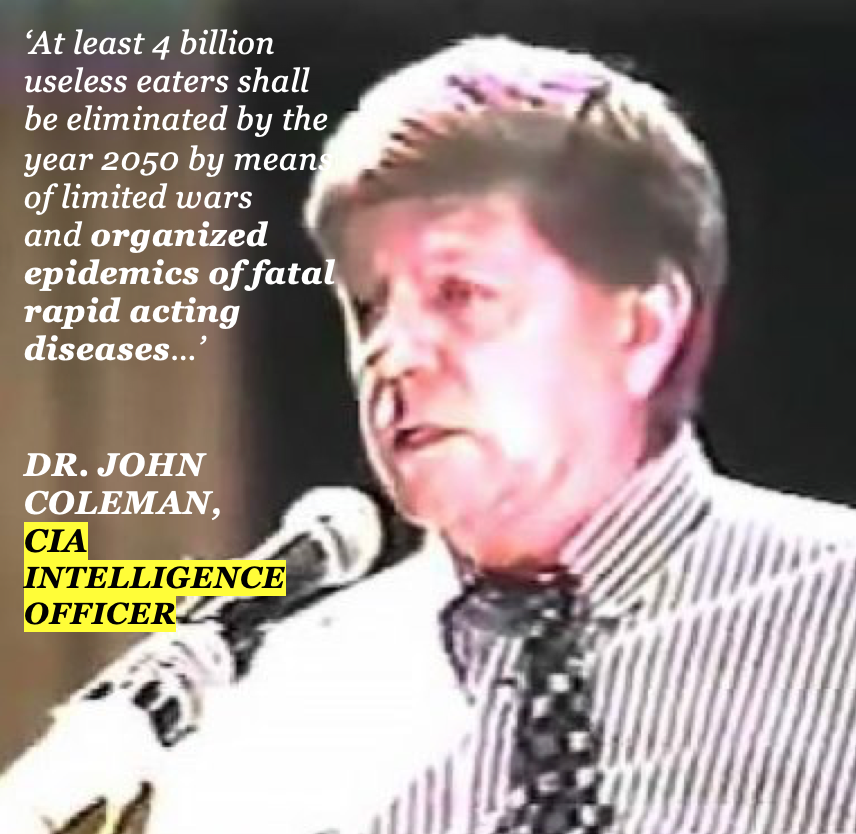 Peter Koenig in his article “Forced Vaccination and the Road to “Digital Tyranny”: Agenda ID2020 Revisited” says we will have to suffer much before 2030 “Great Reset” by Klaus Schwab. Peter Koenig questions the ‘deaths’ Presidents of Tanzania, Burundi and Haiti as all opted for home remedies instead of jabs!.

According to Peter Koenig, the real danger is the ‘Digital ID”

What is important to note is that the People of the world are all victims, whether they are US citizens, European citizens, Chinese citizens or any other global citizen. Even Governments may be just as clueless, mainstream media heads and the secret societies that run them rule the world. This is nothing that should surprise you as a read through the 2010 Rockefeller report predicting the coronavirus scenario and the solutions to be rolled out virtually place on the table the plan. They cannot be brushed aside as conspiracy theories as these are reports released by them. The various documentaries and interviews are all proof as well. These are no created notions but statements revealed from their own mouths!

There is some hope for example the Swiss via referendum rejected a law proposing electronic IDs mainly because the Swiss government planned to privatize the data & management and the Swiss did not wish to have their personal data open to private parties. The Swiss people have been regularly petitioning against attempts to suppress their rights. The 99.9% of the People of the World need to realize the bigger plan concocted by 0.001% or even less.

No one is against measures taken to curb or eliminate covid – but if this virus has been created to suppress and control the people even attempting to cull them & a handful are forcing governments to adopt tyrannical measures that align with the main obective, the People of the World must wake up & say NO.