The reason US invaded countries of Latin America for 39 years was bananas. However, the Nicaraguan operation was different. US was involved in 2 covert operations in Nicaragua & Iran (1984-1987) The 1stoperation was to use a Honduran rebel group called Contras against the Nicaraguan Government of Sandinista. The 2nd covert operation was to sell arms to Iran to release American hostages held in Lebanon. The profits from the arms sales to Iran was used to support the Contras to overthrow the Nicaraguan government via third parties and private funds. It is the propaganda aspect used that Sri Lanka must look at.

US occupied Nicaragua from 1912 to 1932 & left after replacing a pro-US trained Somoza Garcia who took power in 1936 after murdering Sandino. Garcia regime held power for 43 years after which Sadinista took power in 1979 & declared emergency, expropriated land & businesses owned by old dynastic family, nationalized banks, mines, abolished old courts, denounced churches & nullified the constitution. Naturally, US did not take these actions lightly & began supporting those that were anti-Sandinista. These became known as the Contras.

President Reagan’s “democracy decade” resulted in over 80 publicity stunts to influence public & congressional opinion to influence aid to Contras. However, many in Congress were skeptical, yet CIA was given a bigger role to train & fund Contras & twist propaganda in favor of the covert operation.

The 1985 Intelligence Authorization Act outlawed US Govt agencies from soliciting money from third-party countries to fund Contras, it allowed US State dept to solicit funds as “humanitarian assistance”! That was how loopholes were created and Nicaraguan Refuge Fund emerged and $12m was raised out of which $2.7m went to the Contras.

Lt. Col. Oliver North was the Deputy Director of Political-Military Affairs for NSC. It was Oliver North who suggested to overcharge Iran for weapons sold to them & to use the surplus to fund Contras.

CIA supplied money to Contras via Saudi Arabia, Taiwan & Iran. An airstrip was built in Costa Rica to send supplies to the Contras – that ended when Sandinistas shot down the plan on 5 Oct 1986 capturing the US pilot. CIA also undertook air attacks on Nicaraguan storage tanks (destroying fuel), medicines. The same tactics used in US wars in Middle East & Africa.

This was used to train, arm, fund the Contras to fight the Nicaraguan govt. The manual was revealed only in 1984. 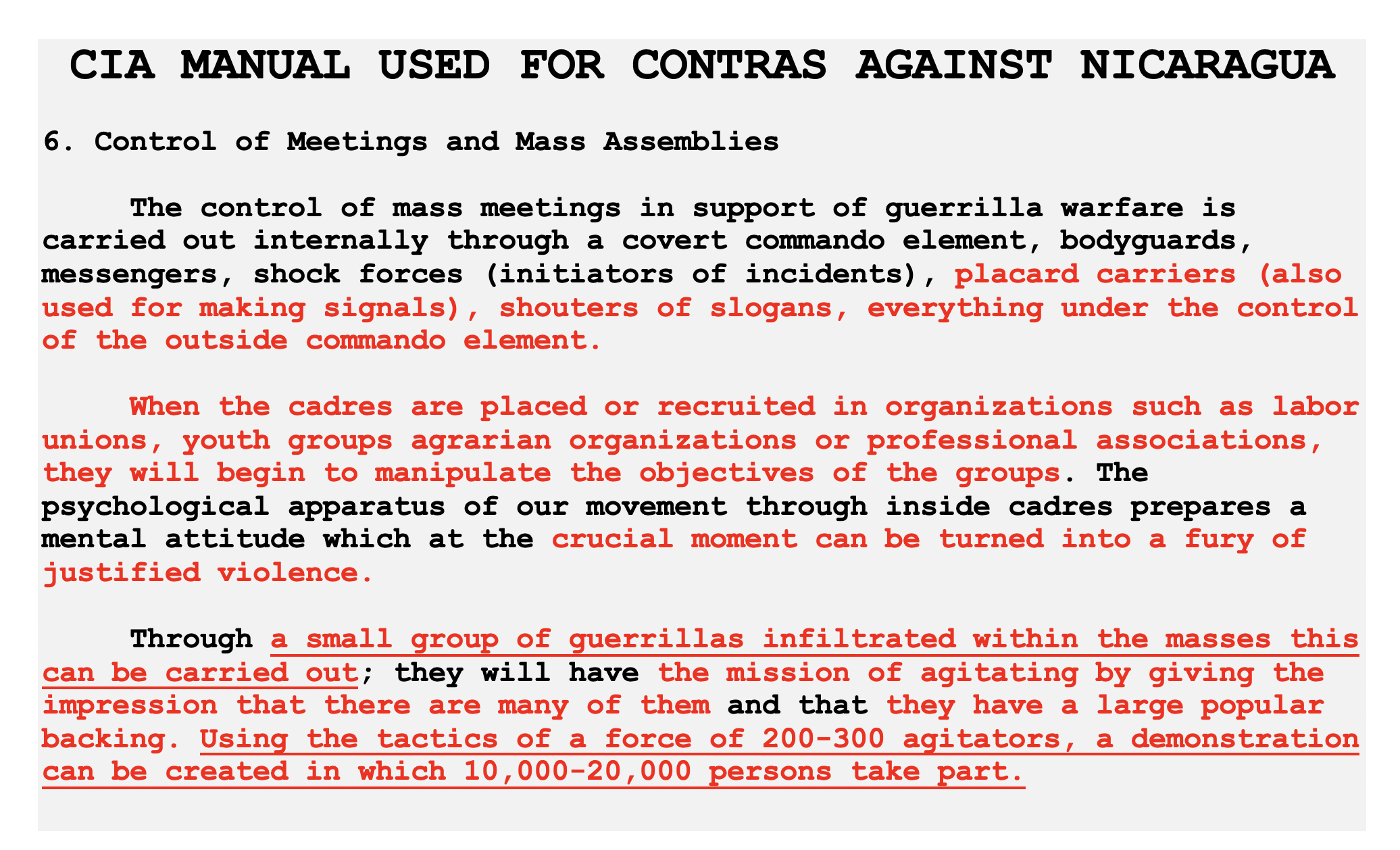 The CIA also used “Freedom Fighters Manual” (15 page) airdropped to Contra rebels and average citizens on how to work against the government.

The manual guided how to cause civil disruptions & initial instructions were simple, harmless & without risk – calling sick to work, leaving lights & faucets on (the aim was to decrease production & hinder economy)

The end of the manual gave violent instructions with diagrams showing how to make Molotov cocktails to use as firebombs on police stations, how to burn fuel supplies, how to perforate fuel tanks with ice picks.

Americans & the world came to know of US-Iran ties after ousting of Iran’s Mossadegh in 1953 & placing Shah till 1979 Ayatollah Khomeini came to power severing ties with US resulting in the US embassy seize & 53 hostages on 4 Nov 1979, embargo against Iran resulted in more US hostages in 1984, then came the Iran-Iraq war, the US arms deal with Iran was brokered by Saudi businessmen Adnan Khashoggi & $1m worth of arms was sent to Iran on 20 Aug 1985. According to Brown University, of the $1m – only $150,000 was spent on weapons the remaining $850,000 were for the Contras.

2 Lebanese newspapers broke the story about the Iran arms deal in November 1986 & US became exposed. Oliver North faced criminal charges while Pointdexter resigned as National Security Advisor.  The Tower Commission & the Majority Report of the Congressional Committee Investigating the Iran-Contra Affair simply faulted the President & the whole scandal was hushed up as just another affair.

In 1984 Nicaragua took US to the ICC claiming $17billion & won. US was ordered to pay reparations but hasn’t.

The ICJ held that the US was:

“Finds that the United States of America, by producing in 1983 a manual entitled Operaciones sicológicas en guerra de guerrillas, and disseminating it to contra forces, has encouraged the commission by them of acts contrary to general principles of humanitarian law”.

It is a case study in itself that mighty US would go after a nation of just 6.5million people with propaganda that tapped over 100 editorial writers, over 1500 lectures & panel discussions, 107 religious organizations, reporters, lobbyists & even members of Congress. Much of the propaganda was based on lies told well and in such a way that it was believable and believed.

These are all lessons for Sri Lanka …. But most of the “educated” in Sri Lanka seem to think no foreign involvement or interference prevails in Sri Lanka’s internal affairs & nothing of the propaganda types that US manuals replicate in all of the nations that are geopolitically important to them are also rolled out in Sri Lanka.