Lessons for Sri Lanka: What US means when it delivers “Democracy” via NED to China 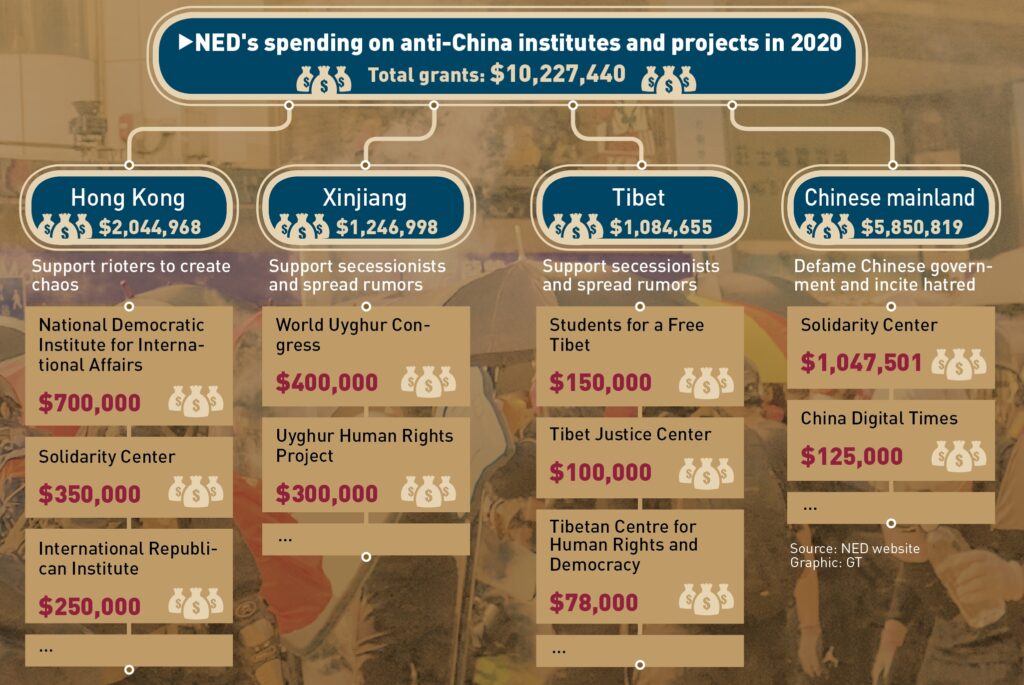 US Govt delivers democracy through National Endowment for Democracy NED. Foreign aid & programs associated with the aid were to determine the manner of “democracy” to be delivered. That “democracy” meant helping friendly regimes, toppling unfriendly regimes, propping puppets, assisting dictators – all in the name of ‘democracy’. Democracy became intertwined with political and economic assistance that soon became insisted. The task was outsourced to USAID and US Peace Corps who initially targeted Latin America, Africa, Middle East & Asia.

US Govt channels aid through National Endowment for Democracy (NED) & this aid is used to promote democracy & economic freedom. Details about NED’s activities are not made public beyond what it claims to do. The objectives behind the program initiatives are kept secret. Thus NED’s real initiatives from 1983 remains known only to the US Govt.

Funded by US Congress

Mission – assist ‘development of democratic institutions, procedures and values’ in other countries

NED definition of democracy – right of foreign people to freely determine their own destiny, via a system that guarantees freedom of expression, belief & association, free & competitive elections, respect for inalienable rights of individuals & minorities, free communications, media & rule of law.

NED’s Journal of Democracy is the Bible of its programs.

NED’s Democracy Resource Centre is for its contacts & information

These 4 entities represent 2 political parties in US, labor unions & US businesses)

CIA image was exposed by 3 Commissions

1984 Iran-Contra – “Project Democracy” covert attempt to restrict aid to Nicaraguas Contras via Lt. Col. Oliver North violating Congress orders channeling funding through arms sales to Iran resulted in CIA creating within itself a secret government. VP Walter Mondale & Republican Frank Fahrenkopf had strong links to NED serving on its board & did utmost to not link NED to the Iran-Contras affair.

1988 Chilean Plebiscite – citizens voting whether to retain government of Gen. Augusto Pinochet. US became involved through NED giving $600,000 to opposition groups. US Congress gave NED another $1m to distribute in Chile to get voters to come & vote for the Opposition (NED Chile was a success)

1994 Congressional authorization fight – In the first year of operations Congress authorized $18m. in 1994 it increased to $48m but later reduced to $35m

If NED doesn’t give money to anything conflicting with US interests, it invariably implies NED only gives money to those entities that compliment US interests (whether they promote freedom or not). Operative word is ‘interests’. Therefore, anyone known to be a recipient of NED funding is definitely aligned to US interests & have its ‘democracy ‘tailored to local needs’.

Critics of NED claim it is only duplicating what USAID & USIA already performs which is why members of Congress are calling to cut international funding for ‘democracy’ overseas. The 1995 General Accounting Office report recommended the continuance of NED only if it proved it was more effective than USAID or USIA. As per GAO, NED was still less effective than USAID.

NED operates in countries in secret & with groups that are meant to operate in secret. This is what raises doubts in people. If the programs are genuine, why the secrecy? It is obvious that within the fancy terms and names used for the programs is a bigger program kept undisclosed possibly even from the groups. How ironic for people claiming to be ‘democratic’ but doing things in secret. Even the American public are questioning the NED secrecy.

NED grants often means increase in US military personnel in the country, more US interference in internal affairs of a country. NED always fishes in troubled economies which implies it succeeds better where countries are weak when countries are vulnerable. The next question is – do they help to make the country weak & vulnerable with their programs?

NED grants for education to countries means that the curricula is designed as per US wishes. Essentially, the aim is to denationalize children and steer them towards the ‘values’ that US wishes to promote.

NED grants for small & medium business means encouraging them to lobby for open markets & liberalizations to US and West’s advantage.

NED grants to media & publishing means promoting media as per US agenda. There are so many ways to present a fact or even a lie.

Thus when NED grants to youth, rule of law, judiciary, military relations, civil society — we do not need to make second guesses as to what the ulterior aims are.

CENTRE FOR MODERN CHINA received $265,000 NED media & publishing funding to create 2 journals – MODERN CHINA STUDIES & JOURNAL OF CONTEMPORARY CHINA – the focus was on rule of law in China & was to be promoted to use in Chinese law schools. The aim was to overhaul Chinese legal system.

ASSOCIATION FOR GRASSROOTS GOVERNANCE & INSTITUTE FOR ASIA-PACIFIC STUDIES received $600,000 each in 1996 to hold workshops to train provincial & local elected officials in China

NATIONAL LEAGURE FOR DEMOCRACY received $305,125 from 1991-1996 to train leaders in strategic planning techniques & train citizens to oppose government through non-violence.

CHINESE ECONOMISTS SOCIETY given NED grants to conduct conference on China’s transition to a market economy & showcase problems with state-run industries in China & to encourage privatization of financial sector in Guangdong Province and to establish a “Private Enterprise Management Training Centre” to train young Chinese entrepreneurs.

CENTRE FOR MODERN CHINA given NED grants to fund publication & distribution of a series of academic papers focusing on solutions offered for a free market to China’s economic problems.

According to the dissertation research by Eric T. Hale, NED has not been successful at promoting democracy & economic freedom in the 1990s.

If NED had been so active in China in the 1990s, it is not difficult to imagine the inroads beyond 21stcentury.

NED is active in Sri Lanka. NED has funded Sri Lankan NGOs to the tune of $1m in 2021 alone. If NED has funded street movements, paid demonstrators, funded riots, paid NGOs to train youth elsewhere to overthrow elected leaders, destabilize countries — do you think NED will not be replicating the same programs in Sri Lanka? Now merge that with the NGOs – youth – women & other players active in the recent “protests” and begin asking yourself questions and seeking answers for yourself.