The Trinco Port & Trinco Oil tanks as well as reference to foreign broadcasting (Voice of America) is mentioned only in the letter by Rajiv Gandhi. The Accord only mentions the 6 point annexures. There is no mention of letters being part of the Accord. Thus Sri Lanka is not bound by the contents as these are signed between 2 former heads of State who are now no more.

The agreement attached “utmost importance to nurturing, intensifying & strengthening the traditional friendship of India & Sri Lanka” – none of the above also happened.

The Agreement further breaks down the objectives 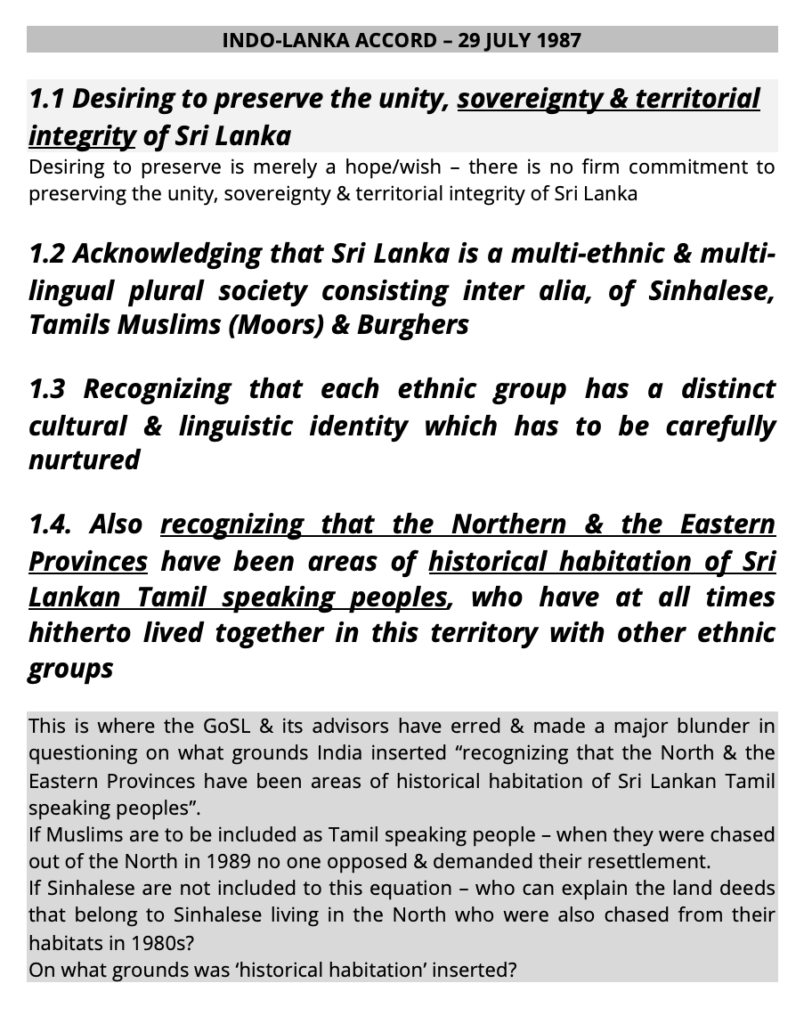 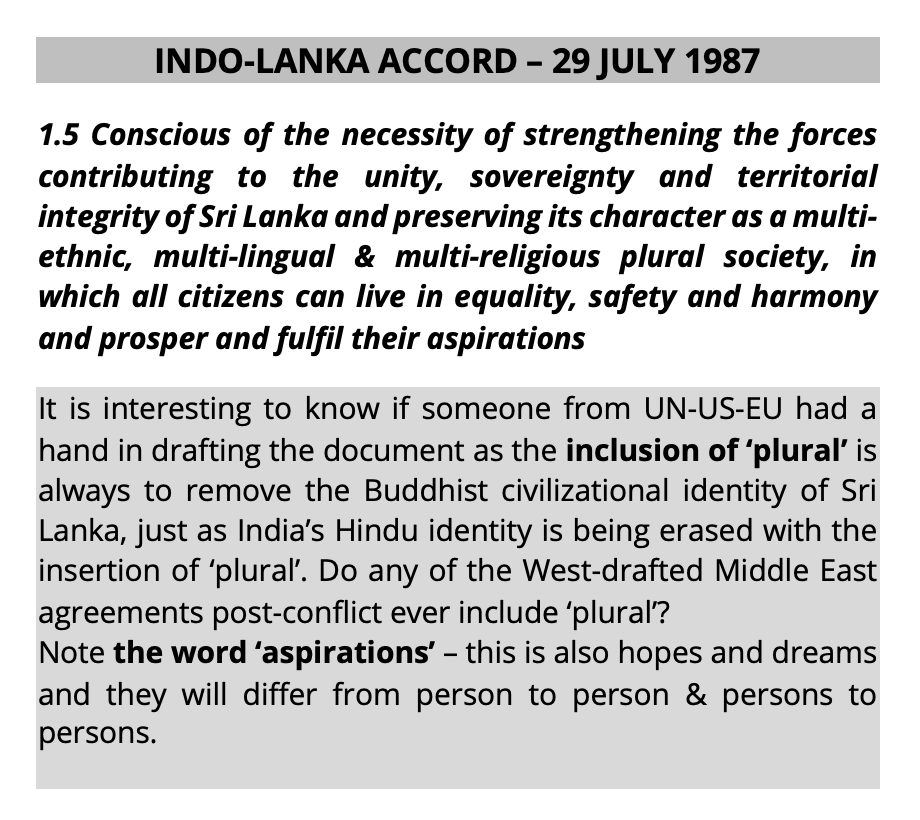 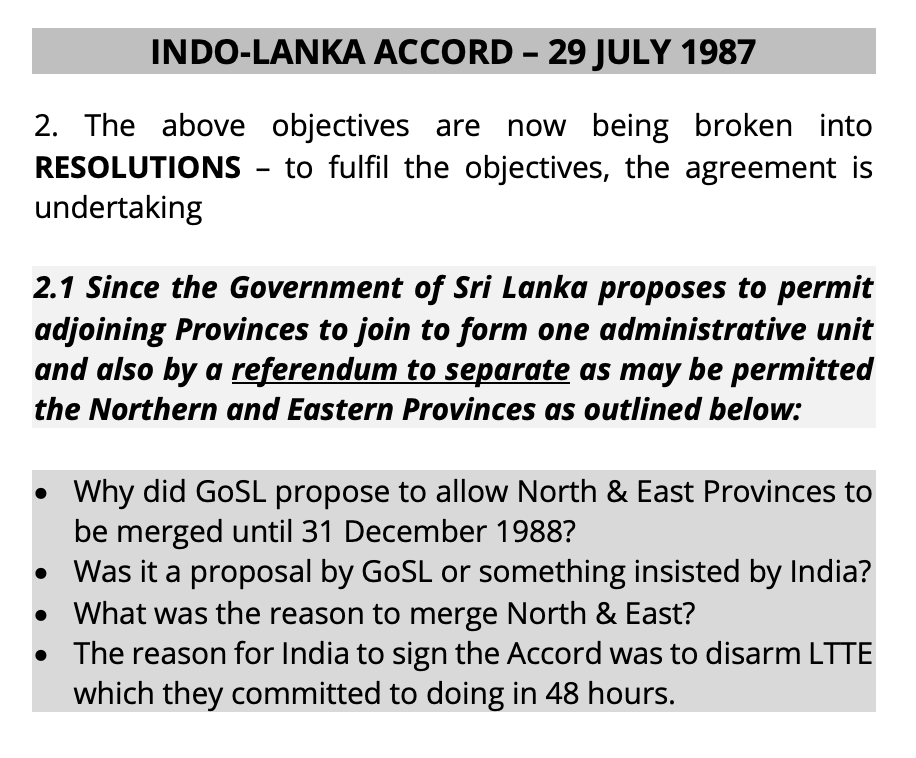 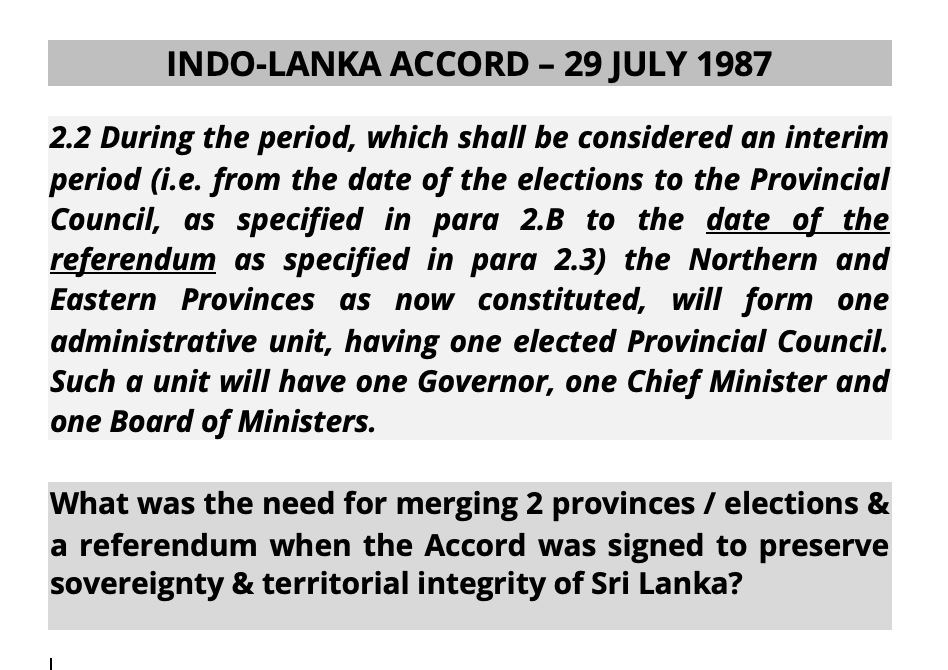 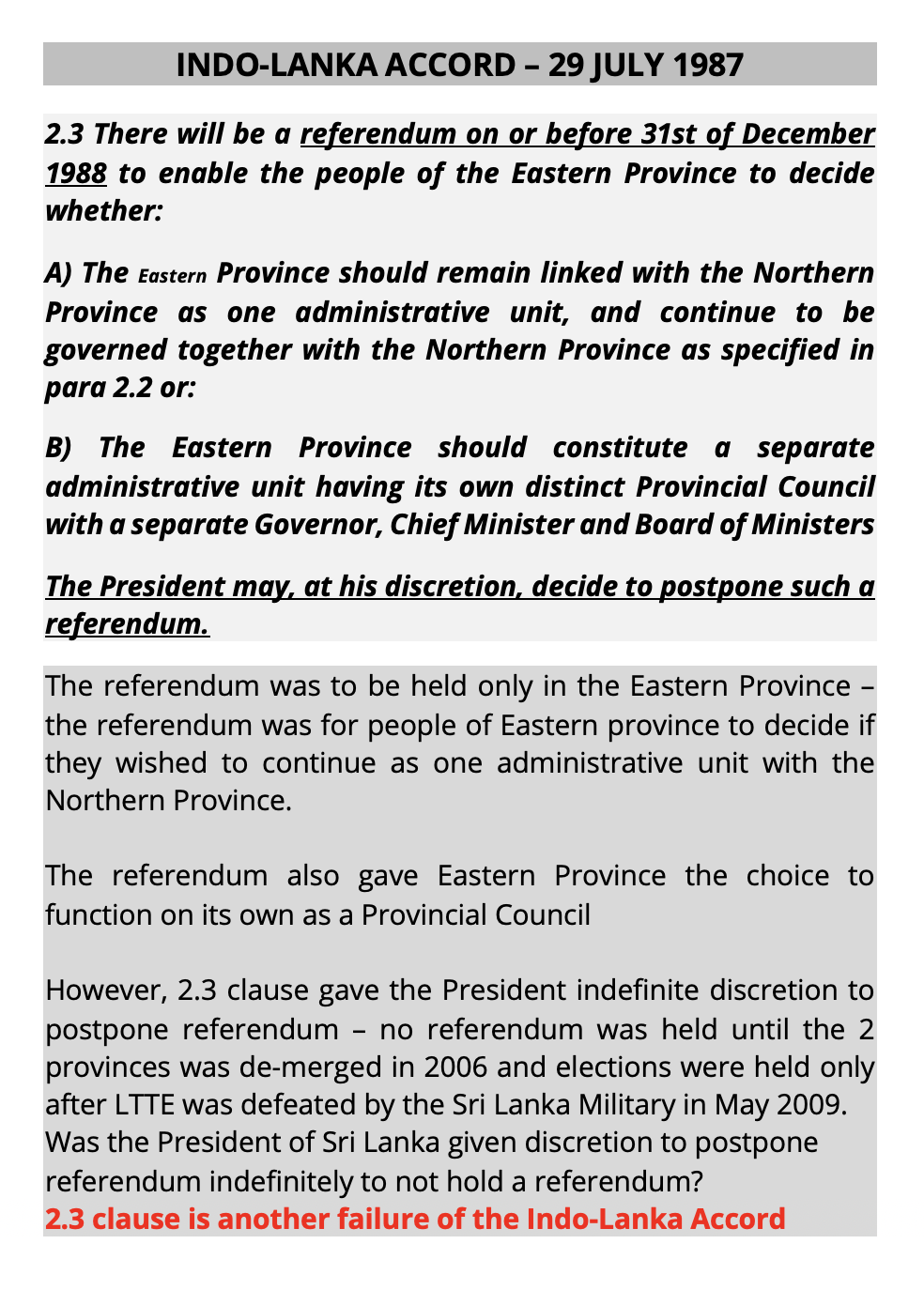 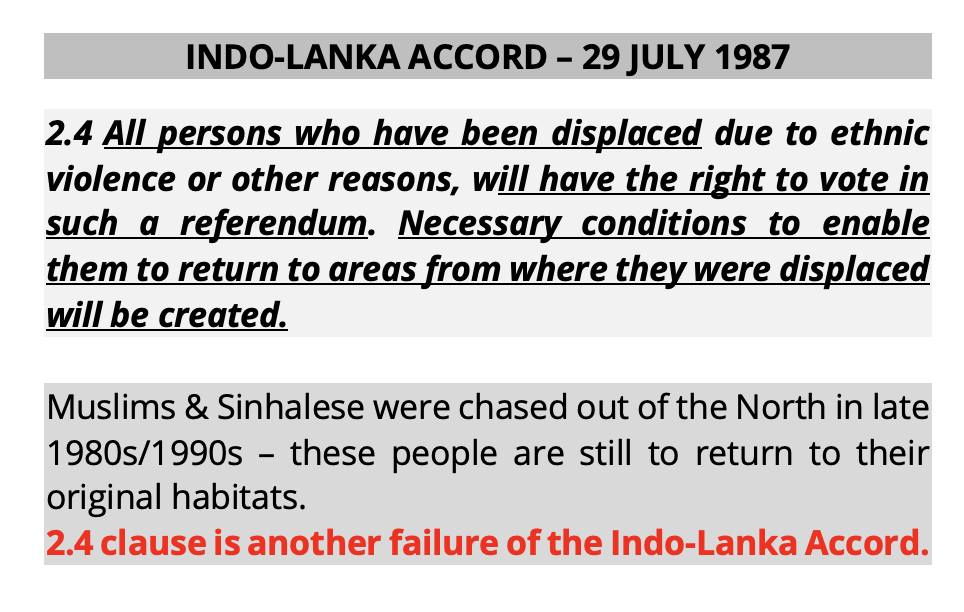 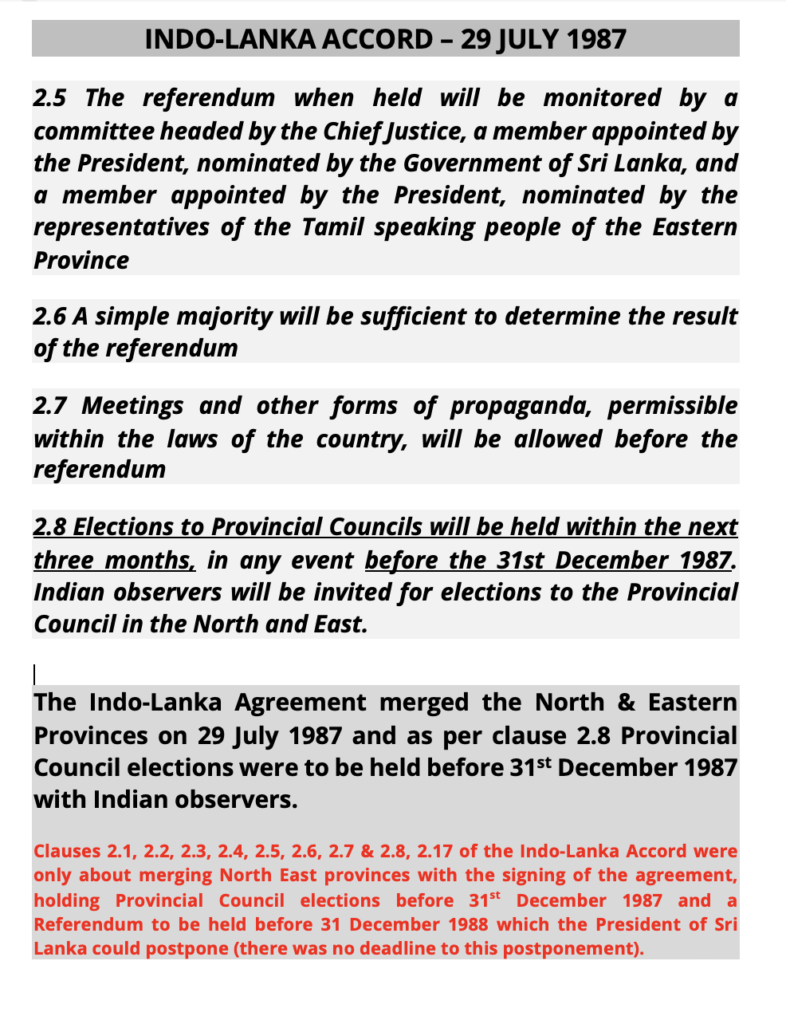 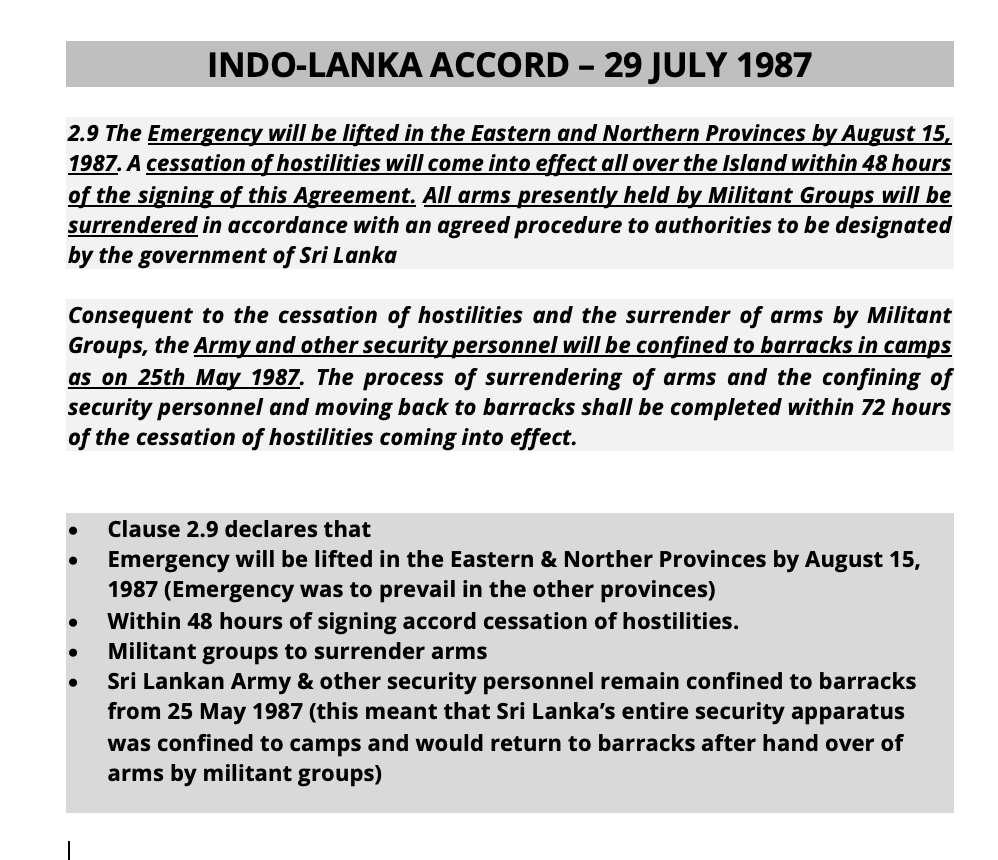 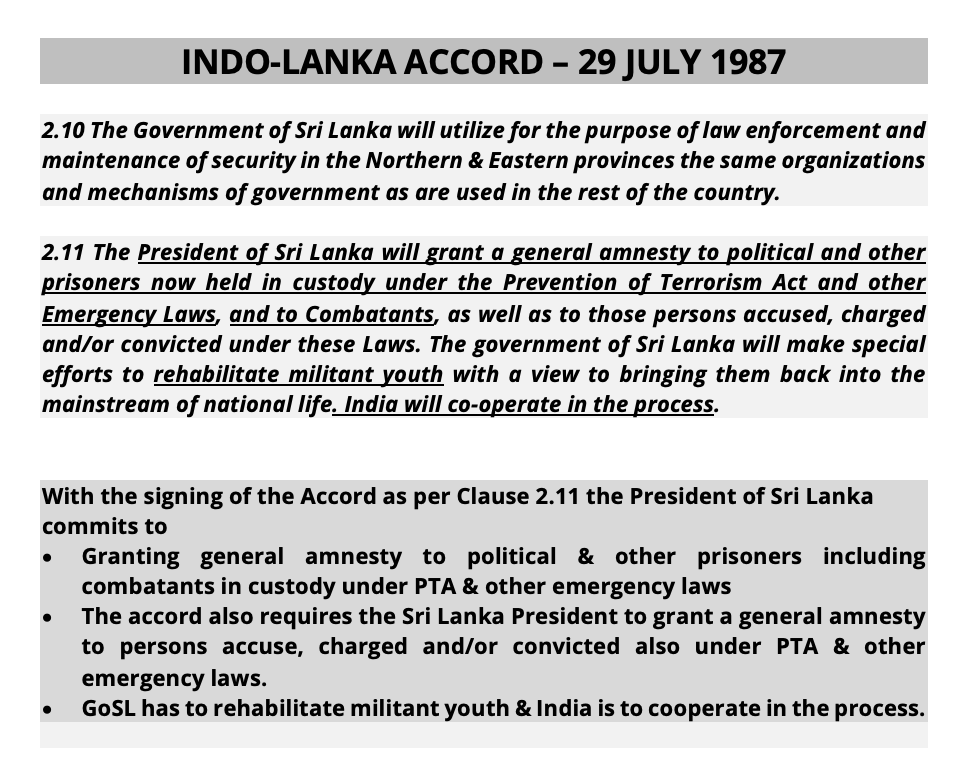 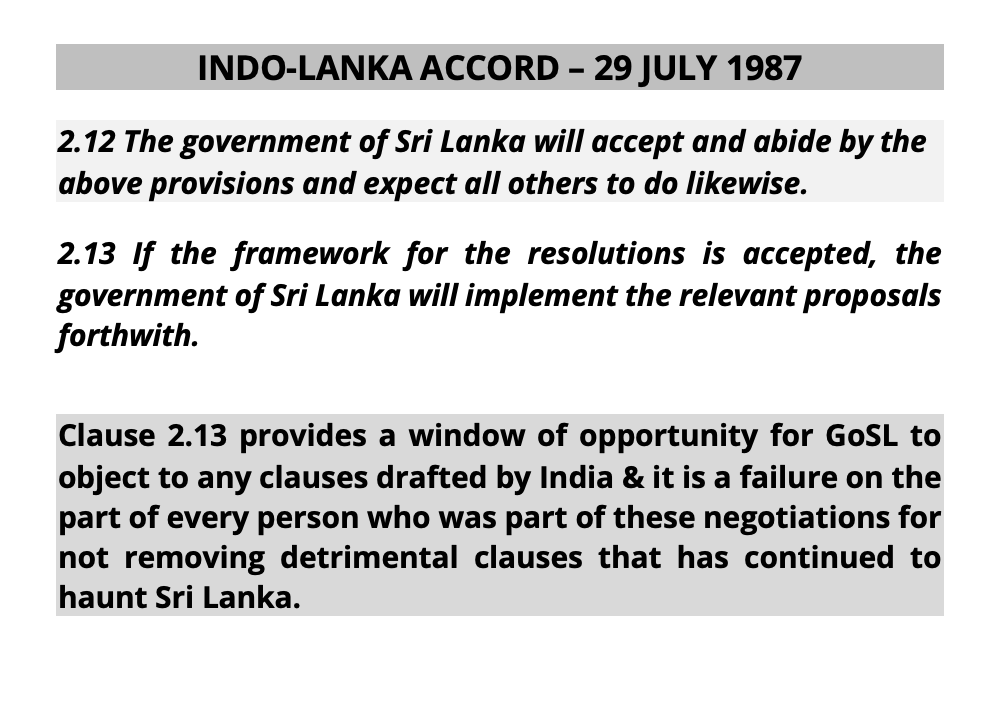 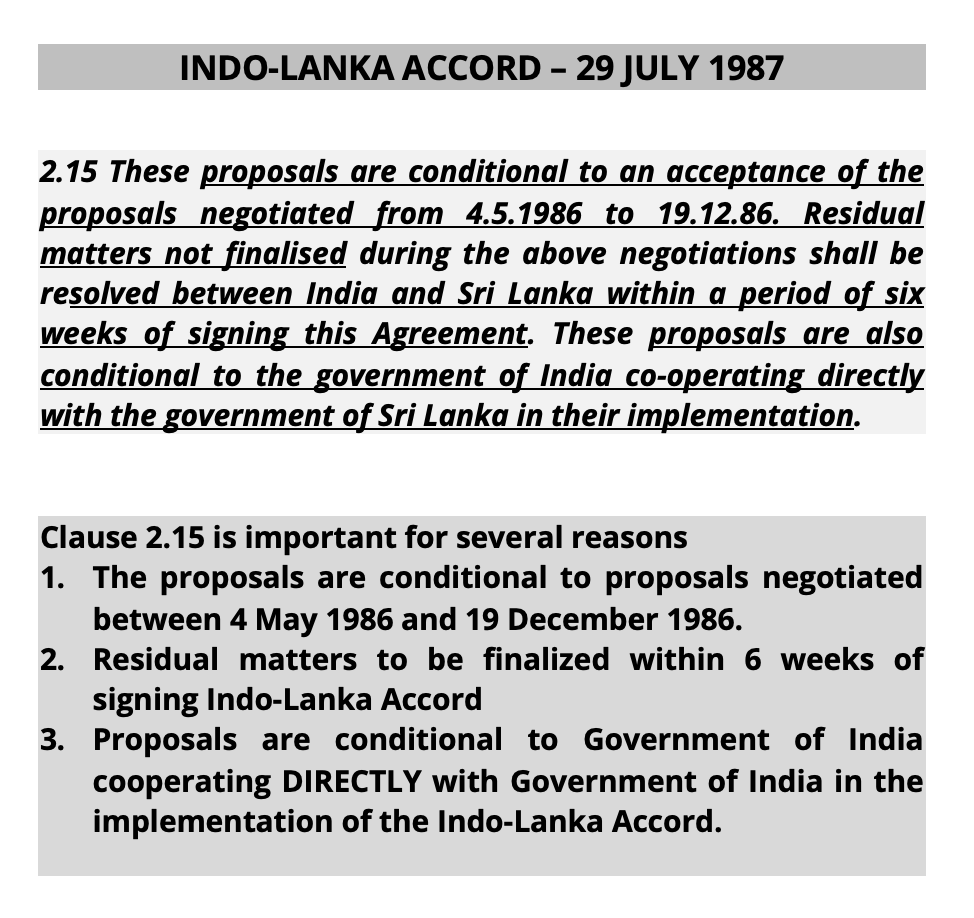 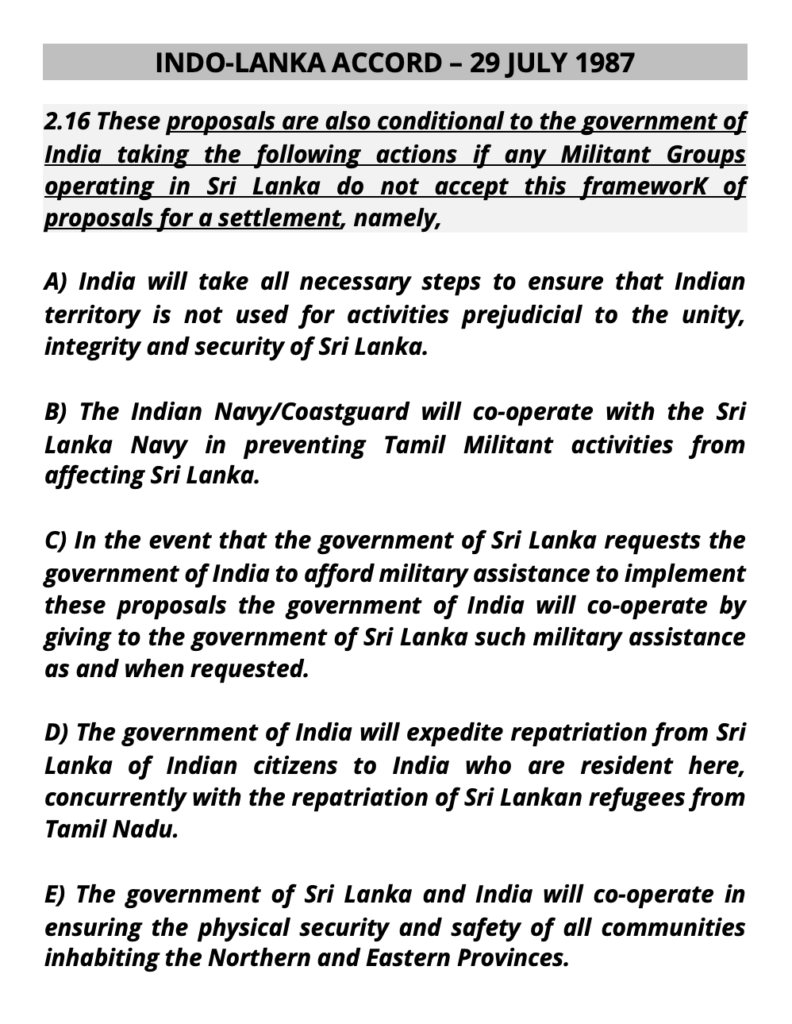 Clause 2.16 sets further actions by the Government of India if Militant Groups do not accept the outlined framework of proposals (NE merger/NE Elections/Referendum)

Did India ensure Indian territory is not used for activities prejudicial to the unity, integrity & security of Sri Lanka?

Repatriation of Indian citizens living in Sri Lanka has not been done.

Both Governments to cooperate to ensure physical security & safety of all communities living in North & Eastern Provinces.

This clause also failed as IPKF began killing and raping people of all communities as they could not identify who was who and majority of IPKF soldiers did not speak Tamil.

IPKF killings and rapes have yet to be investigated. 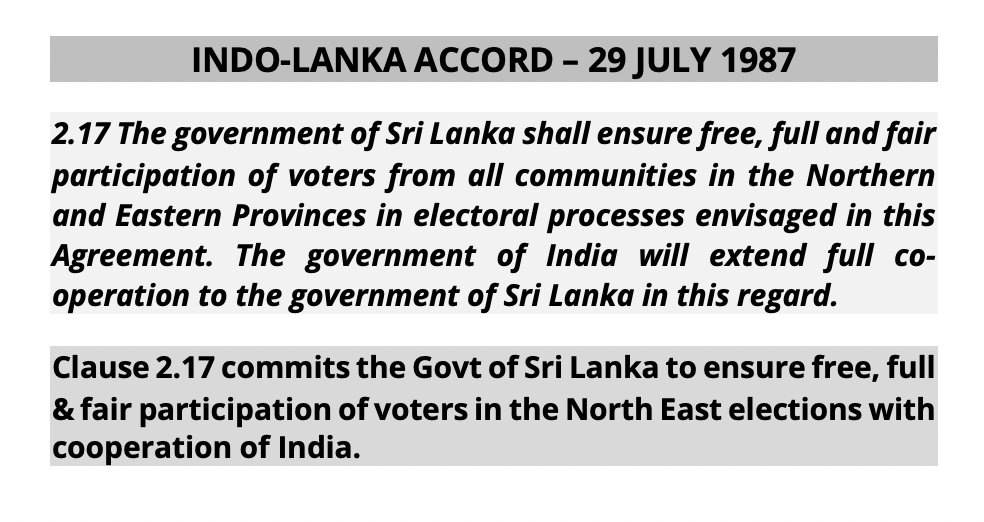 In witness whereof we have set our hands and seals hereunto.

Done in Colombo, Sri Lanka, on this the twenty ninth day of July of the year one thousand nine hundred and eighty seven, in duplicate, both texts being equally authentic. 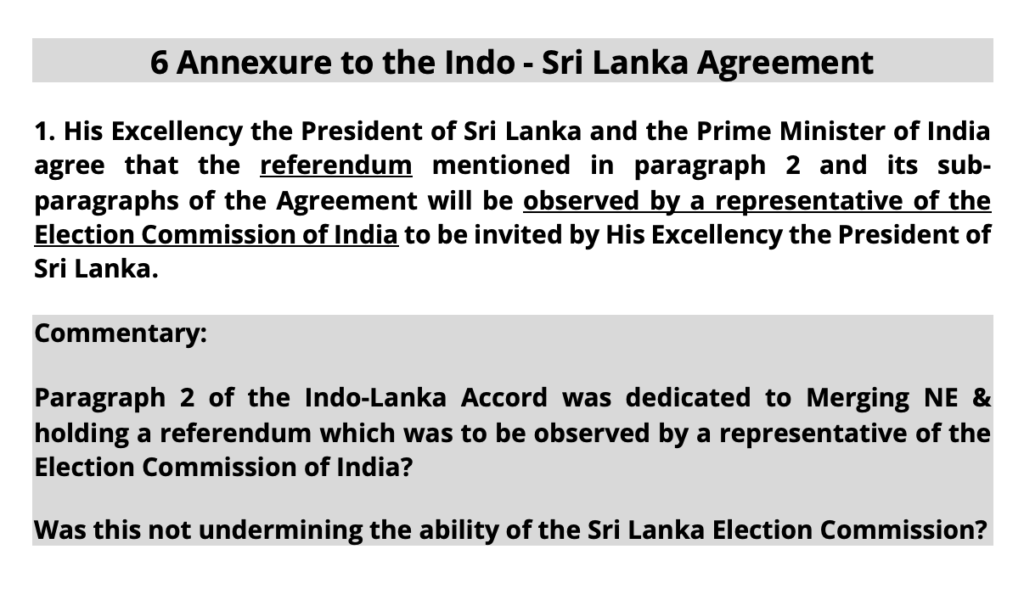 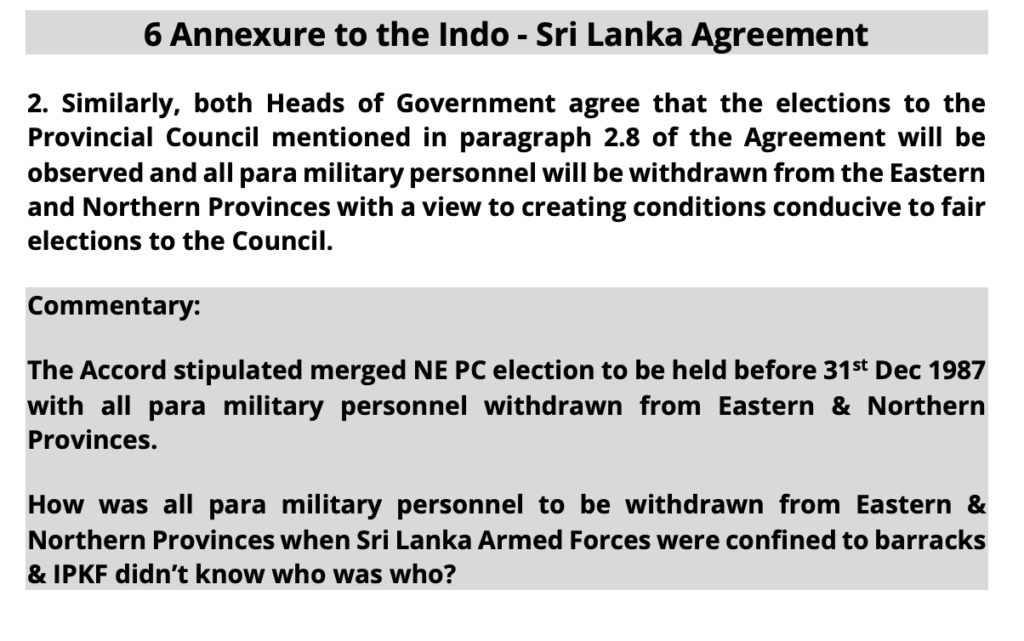 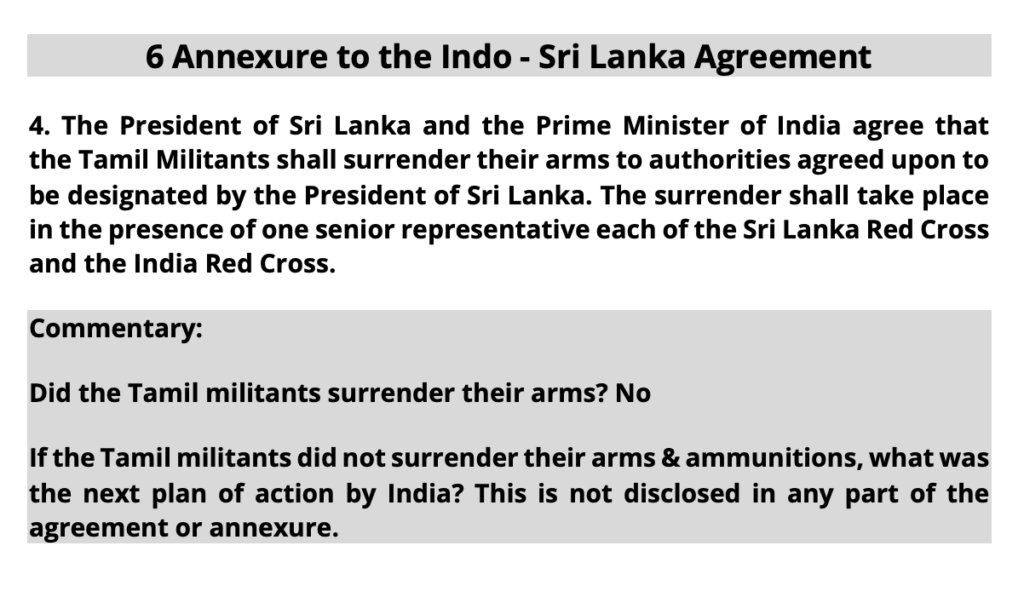 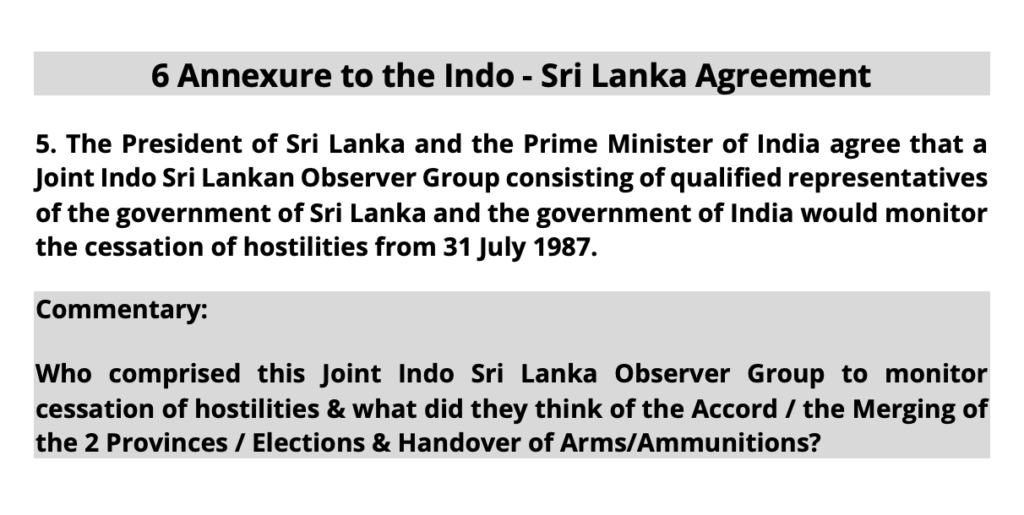 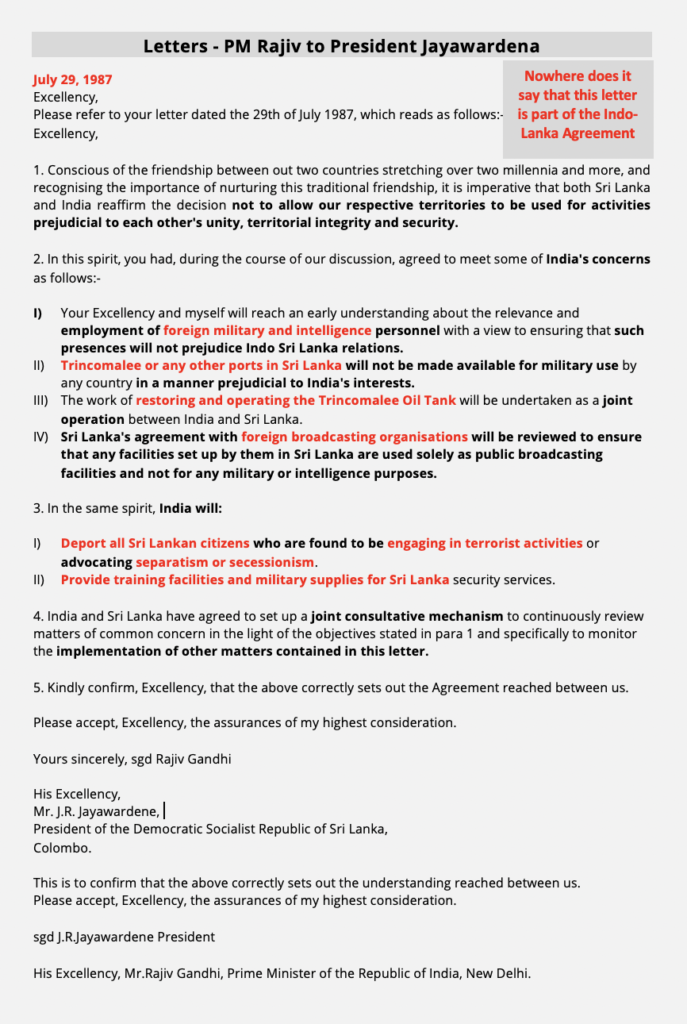 If the letter is not part of the Accord, Sri Lanka is not bound to commit to any contents of this letter

Noteworthy also is that there is not a line that mentions creating PC system & 13th amendment or devolution in the Indo-Lanka Accord. The Agreement makes reference to North East Provinces and merging them & holding elections & referendum in them. The UN & so-called international community must take out the document & read line to line of it.

So 13th amendment is separate to the Indo-Lanka Accord although that too was forced upon Sri Lanka. Devolution of Sri Lanka via constitutional changes under duress as sufficient evidence that India would take military action is available via threats by Indian envoys to Sri Lanka’s envoy. This is a violation of Article 2(4) of the UN Charter “refrain …. from the threat or use of force against the territorial integrity or political independence of any state”.

India further committed aggression against a friendly state by the measly food drop to only one community, breaking India’s claim that it is concerned for all communities of Sri Lanka.

“expression of a state’s consent to be bound by [a] treaty which has been procured by coercion of its representative through acts or threats directed against him shall be without legal effect.

India has also violated Article 52 of the same Convention

“a treaty is void if its conclusion has been procured by the threat or use of force in violation of the principles of international law embodied in the Charter of the United Nations.”

Moreover, India committed to 5 clauses under the Indo-Lanka Accord. India did not honor any of them. This is a violation of “Pacta Sunt Servanda’ (pacts are meant to be honored for agreements to be valid) If India did not honor the pact, that pact is no longer valid under this legal maxim.

Indo-Lanka Accord was signed in 1987 – the political dynamics of 1980s or 1990s does not exist presently. India was a closed economy upto 1994. India was never under US orbit during this time. The foreign broadcasting service referred to in Rajiv Gandhi’s letter to President JR is Voice of America station. Today, India is now partners with US and India has no issue in US military ships landing in Sri Lanka or Sri Lanka signing ACSA making use of Sri Lanka’s airports & ports. What if India & US suddenly do not see eye to eye – will India pluck out the Indo-Lanka Accord again while ignoring it when India sees fit? These double standards is unacceptable in diplomatic relations.