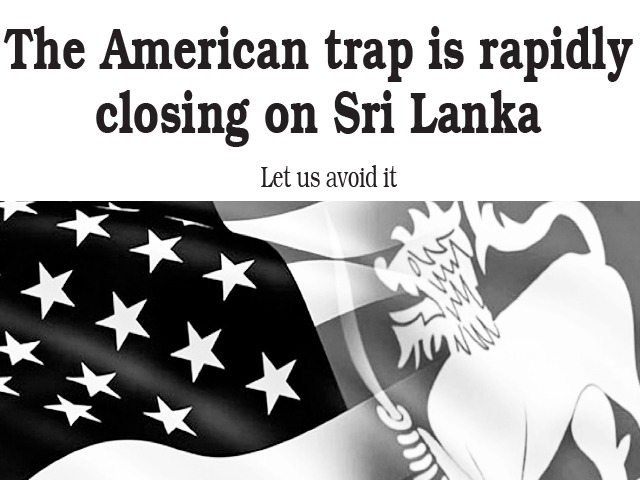 The People of Sri Lanka are supposed to feel elated that the US Government is giving a ‘gift’ of $480m across a period of 5 years. This gift comes with plenty of strings. Sri Lanka has to commit to a set of preconditions which include privatizing of all state land as well as agreeing to honor undisclosed notifications sent by MCC from time to time via letters. Only after signing MCC Compact, Sri Lanka is given $32,5m. The Compact enters into force only after domestic requirements are completed, Program Implementation Agreements are signed & AG’s signed legal opinion is sent to MCC. The remaining $447.5m is given across 5 years through a private bank to a private company reporting to US Govt/MCC, established after Sri Lanka’s Parliament passes the MCC and makes MCC into a domestic law (similar to 13a). While the land project is just $67million there are a host of costings that the GoSL has to incur.

Has the GoSL prepared a costing? Have Sri Lanka’s professional bodiesincluding accountants/auditors also done a costing?

MCC Agreement says a portion of $32.5m will be used for Transport Feasibility study.

HOW MUCH IS THAT?

Only after signing the MCC Agreement, $32.5m Compact CDF is given to facilitate implementation of Compact.

Only after entry into force that MCC will disburse $447 to implement the Program based on yearly disbursements. Each disbursement subject to various criteria allowing MCC to even withdraw/reduce amounts.

These domestic requirements are

Breakdown of disbursement of MCC Funding to a private bank & handled by a private company set up in Sri Lanka.

HOW MUCH IS THAT FOR SRI LANKA?

HAS THE GOSL FACTORED THIS LIKELY COSTING TO BE BORNE BY SRI LANKA?

IF THE MONEY SENT BY US/MCC IS TO GO TO A PRIVATE BANK – WHY SHOULD GOSL PAY DOLLAR INTEREST TO MCC?

GoSL has to provide funds & other resources & take “all other actions necessary to carry out the Governments responsibilities”. The Agreement also binds GoSL to not reduce ‘normal & expected resources it would receive or budget from sources other than MCC for activities contemplated under Compact & Program.

Clause 2.6d says MCC Funding is ONLY in ADDITION to resources GoSL budgets for Compact/Program

HOW MUCH IS THIS LIKELY COST to SRI LANKA?

GIVEN THAT THESE ACTIVITIES HAVE A COST – DOES THIS MEAN SRI LANKA HAS TO INDIRECTLY BEAR THAT COST. IF SO, HOW MUCH IS IT?

The MCC will not be paying any taxes, duties – what is the likely cost GoSL will have to incur as a loss of revenue as GoSL would be tasked to facilitate most of these project efforts.

GoSL has to follow US Procurement guidelines, rules & regulations.

WOULD THAT ENTAIL ANY ADDITIONAL COST TO THE GOVT. HOW MUCH?

The GoSL’s responsibilities are covered in the following sections

Section 5 – use of MCC Funding

MCC says it will remain until it is satisfied Sri Lanka has satisfactorily completed the Compact agreement. MCC also claims that over 20 years 11m are to benefit by its Compact (7m from Transport Project & 5m from Land Project).

DOES THIS MEAN MCC WILL REMAIN IN SRI LANKA FOR 20 YEARS?

HOW MUCH WILL THIS COST THE GOSL?

Who is responsible for Land Acquisition & Resettlement?
WHAT IS THIS COST THAT GOSL WILL HAVE TO BEAR?

WHAT IS THE COST TO THE GOSL FOR THIS CAMPAIGN & ROLL OUT?

WHAT IS THE COST TO THE GOSL FOR THIS?

HOW MUCH IS THIS GOING TO COST THE GOSL?

HOW MUCH WILL GOSL NEED TO ALLOCATE FOR THIS?

IS THIS COSTED INTO TRANSPORT PROJECT VIA MCC FUNDING OR IS IT A SEPARATE COST BORN BY GOSL – IF SO, HOW MUCH?

IF SO, WHAT IS THE COST FOR THE GOSL IF BY POLICE INTERVENTION SRI LANKAN LIVES ARE LOST OR INJURED FOR LIFE?

Land Valuation System by Valuation Department & ICTA are being incorporated into the MCC Land Project.

Have these proposals initiated by World Bank, USAID and other players who are part of MCC stake holders prepared the ground work by recommending proposals aheadof MCC?

Are all these studies, recommendations and proposals together with funding part of a larger plan?

WHO IS FUNDING THIS & HOW MUCH WILL IT COST?

IS THIS COVERED IN THE MCC OR IS IT A COSTING TO THE GOSL WHICH MEANS THIS WOULD BE AN ADDITIONAL COST TO ALL OF THE OTHER COSTS SRI LANKA HAS TO BEAR SIMPLY TO SIGN A ‘GIFT’ THAT IS $447M – IS THIS WORTHWHILE FOR SRI LANKA?

MCC funding for Land Project is $67m and covers only 28% of land in 7 districts.

MCC claims the gift is for Sri Lanka but in reality its land project is covering 28% of land area in 7 districts (Anuradhapura,Kandy,Kegalle,Kurunegala,Matale,Polonnaruwa,andTrincomalee) while GoSL has to bear the rest of the cost. How viable is this for Sri Lanka?

is this another way of telling GoSL to evict citizens living on State land?

MCC Land Project $67m will fund the following as per agreement

MCC MAY support preparation of parcel fabric map in geographical areas outside of targeted districts. (what is MCC implying by geographical areas — is it where our best mineral resources are hidden which MCC claims this lcovers 67% of land area – which makes up virtually all of Sri Lanka)

MCC will fund creation of digital folio for each land parcel

IF MCC IS ONLY FUNDING ONLY 10 LAND REGISTRIES AND ONLY 7 DISTRICTS, THE GOSL WILL HAVE TO BEAR THE COST FOR THE REST.

HOW MUCH WILL THIS COST THE GOSL? WILL IT NOT BE MORE THAN THE $67M ALLOCATED FOR THE 10 LAND REGISTRIES IN 7 DISTRICTS BY MCC?

When the apparatus for deed system already exists, why should GoSL make legislative changes to the Title Registration Act to incorporate what already exists under customary law & applied to deed system?

Why is MCC wanting everyone to have freehold title deeds with provision for easy sale & demanding GoSL remove restrictions for such sales?

Why does MCC want GoSL to pass the Land Special Provisions Act privatizing all state land before signing of MCC? MCC Funding will only come about after LSPA has been done.

MCC acknowledges that Title Registration Act passed in 1998 commenced only in 2006 and has done only 600,000 title registrations out of 8m private properties.

The Commissioner of Titles also acknowledges the legal difficulties of transferring from deeds to title registration. The MCC answer is to change legislation every time legal issues crop up. This is not a solution & will only impact the land owners.

GoSL has spent $2.5m per year to do less than 1million blocks.

Based on this cost GoSL will take 240 years to do the remaining blocks & have to spend over $50m to do so. If these figures are wrong the GoSL must produce true costs.

WHO IS GOING TO FUND GOSL to transfer to title certificate from already existing deed simply because MCC wants to roll out its Compact in Sri Lanka?

HOW MUCH IS THIS TO COST THE GOSL?

WHO IS GOING TO FUND THIS? HOW MUCH WILL IT COST IF THE GOSL HAS TO BEAR THIS COST?

GoSL has to also maintain land information technology systems & provide budget funding for its maintenance & updating of software and hardware across 5 years.

HOW MUCH IS THIS GOING TO COST THE GOSL & HAS THE GOSL BUDGETED THIS COST NOT INCLUDING INTO MCC FUNDING?

HOW MUCH IS THIS LIKELY TO BE & HAS THE GOSL COSTED THIS?

Where is the money for the Assurance Fund?

Under Title registration act, land owners defrauded of their lands cannot go to courts to regain their land – their only solace is the Assurance Fund which the GoSL must maintain.

In lieu of court action, the people are given only compensation for their lost land.

The Assurance Fund will also have to cover land lost from the 10 Lang Registries in 7 districts that MCC is Funding.

Is this the ‘gift’ that Sri Lanka’s land owners are getting from MCC?

The Land Registry is now charging a fee for registration of title certificates. As there is no money in the Assurance Fund. This is like an insurance premium – money built up by charging us the land owners. This fee will be increasing as is happening in other countries. 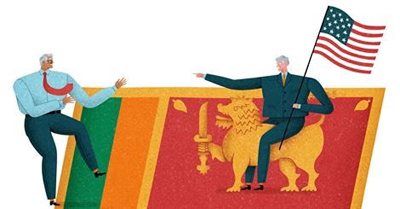 After catering to all domestic requirements demanded by MCC

After opening a private bank account to which MCC sends funds

MCC claims that  it consulted a plethora of individuals & organizations & sought their consent. Every public official, private sector, civil society & development partners. government ministries & agencies, CCC and AMCHAM Sri Lanka who okayed this agreement ignoring the implications to the country must be held accountable for putting Sri Lanka into a vulnerable situation.

WHAT EXACTLY IS SRI LANKA & ITS PEOPLE GETTING OUT OF THIS MCC????