MCC is a US Govt foreign aid agency which is funded by US Govt and the top US representatives’ sit’s on its Board. When $480m MCC Compact was announced immediately after the jihadi terror attacks on Easter Sunday, it was presented as a ‘gift horse’. That everything was done in secret reconfirms our doubts. The then Govt even denied MCC was operating an office inside the PM’s office. It is important to understand that this American compact is part of an overall Indo-US Pacific Strategy and complimented by 3D’s (Development, Defense, Diplomacy). The MCC placed a set of preconditions prior to signing of the agreement, & commitments after signing & passing the compact in Parliament. We must know what the pre-MCC commitments that have been launched are and put a stop to these if the present Government commits to not signing the agreement. An important and necessary aspect of the already launched pre-MCC project is the e-land registry which is outsourced to multiple private companies selected by the US embassy in Colombo.The danger of continuing with the e-land registry lies in the MCC clause 3.9 clause on intellectual property which is why the e-land registry must be brought under Sri Lankan purview/laws & by locals and local IT experts and not outsourced to foreigners.

In viewing this MCC agreement it is advisable for Sri Lankans to stop thinking from the lens of their preferred political party and look at the dangers a foreign agreement is likely to bring to the country & its citizens. Political parties change power periodically but we have enough experience of the suffering our people went through under colonial rule. We should not walk into another 1815 Kandyan Convention (ceding our nation to foreign powers) or allow a 1840 State Land Encroachment Ordinance (where invaders told the natives they were encroaching on their own land) or 1897 Wasteland Ordinance where anyone who had no documentary proof of land ownership had their lands confiscated by the British. MCC should not be a repeat of what took place exactly 200 years ago.

Now, please read these lines carefully and keep them at the back of your mind as you read the rest of this article.

Just think for a minute about an elected Govt agreeing to grant MCC ‘PERPETUAL’ (Permanent), IRREVOCABLE (UNCHANGEABLE), ROYALTY-FREE (ABSOLLUTELY FREE), ‘ASSIGNABLE RIGHT’ (transferring right) to the US/MCC to on behalf of Sri Lanka – PRODUCE, REPRODUCE, PUBLISH, RE-PURPOSE, USE, STORE, MODIFY any PORTION or PORTIONS of INTELLECTUAL PROPERTY as MCC SEES FIT – in ANY MEDIUM, NOW KNOWN or HEREAFTER DEVELOPED, for ANY PURPOSE WHATSOEVER.

Don’t these lines shock you

Don’t you wonder what kind of an agreement this is to hand over Sri Lanka’s Intellectual Property Rights to a foreign country?

Don’t you wonder if the public officials associated with the drafting of this agreement with these lines were insane not to object?

This means MCC would lay claim on products originating or produced in Sri Lanka and we would virtually lose our sovereign rights over products that have origin in Sri Lanka and the Government will have to pretend to be deaf dumb and blind because it actually agreed to hand over Sri Lanka’s past-present & future intellectual property to a foreign country!

The MCC land project is just 67million but is likely to impact our land, land legislation, our resources and our people. A presentation was made by MCC in Temple Trees on 25 September 2018 (slides are given at end of article)

It confirmed that a Constraints Analysis report was made in 2016.

This means that the preparation of the parcel fabric map and inventory of state land, formulating a new land policy, with land information system & data on land was aligned to the goal of facilitating INVESTMENT.

This means though these 3 activities are not part of the conditions precedent to funding, it is however associated with & is part of MCC land project.

In fact, US embassy called for expressions of interest as far back as 2011.

This was the very year US announced its Pivot to Asia plan under President Obama. The MCC was without doubt on the pipeline with various associated projects being plugged in through funding unknown or not doubted by the government in power. Having sent teams to study Sri Lanka’s land administration and funding reports, the external parties knew more about our loopholes than our own public officials.

With the public entry of MCC after 2015 regime change. All of the hidden projects came out into the open and declared part of MCC. 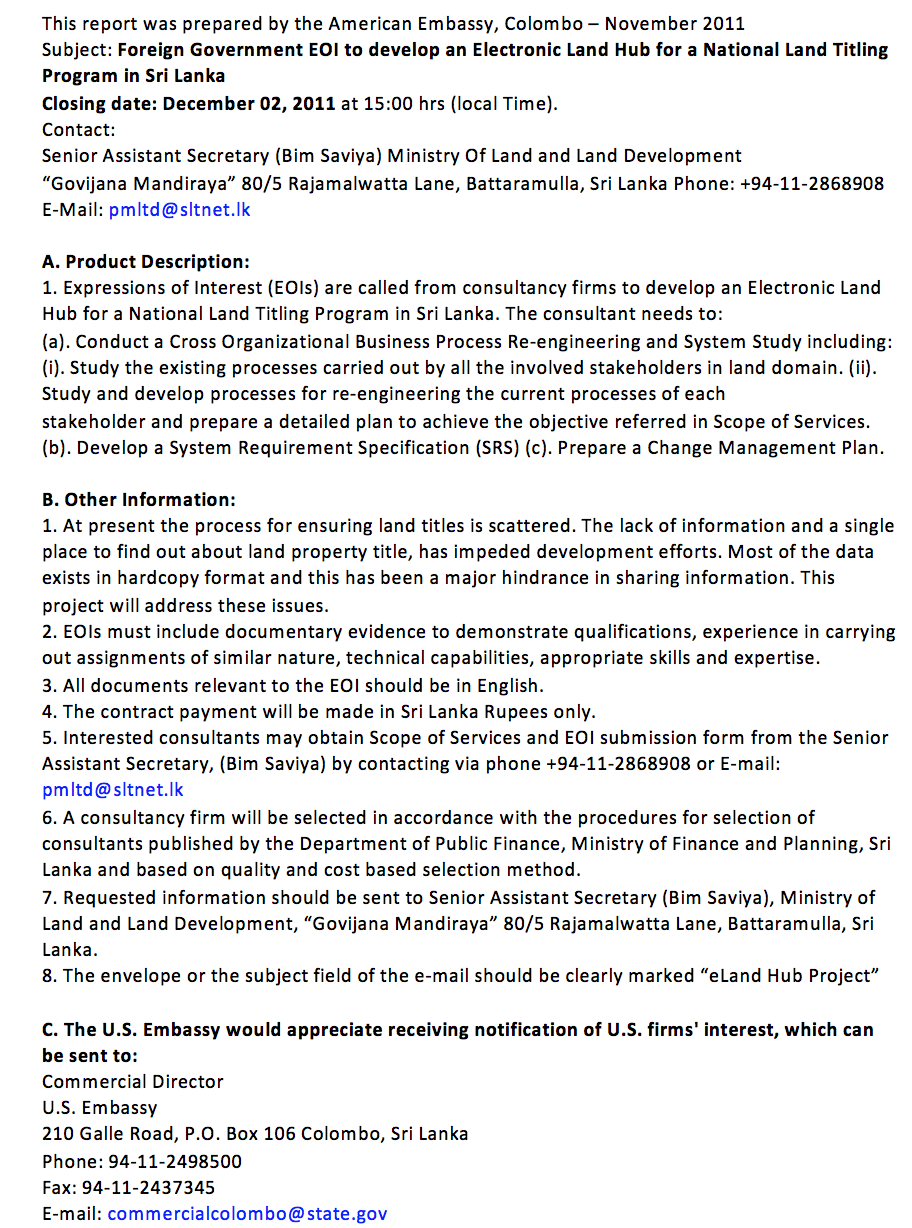 Slide 4 of the presentation made on 25 September 2018 next listed 2 activities SUBJECT TO condition preceding MCC funding(what Sri Lanka had to do BEFORE obtaining any MCC funding) and requires passing by legislation in Parliament.

Would any country allow foreign countries and private firms associated with these foreign countries to be given access to their land records? These companies and their staff are currently going through all of the 45 land registries in Sri Lanka and demanding millions of dollars for their system set ups. Why is the Government not putting a stop to this immediately?

When the surveyor’s department had the capability and the expertise to do the cadastral mapping, ignoring their appeals, the task was given to a US firm (Trimble Navigation) for a cost of $154m. Is this part of the $480m MCC Compact – why should Sri Lanka burden itself to pay 1/3 of what the US is supposed to be giving in total? No one will answer.

Keep in mind that the US has rejected the title registration system and continues with a modernized form of deeds. Why shouldn’t Sri Lanka also adopt the same US system instead of another old & outdated Australian registration system?

Already some 700,000 title registration certificates have been given and their data is being entered into an e-registrar that is operated by foreigners & foreign IT set with back-office and front office operated by them.

Return to the MCC clause 3.9 on intellectual property. Though MCC is not signed, the country’s data is not only being accessed by foreigners and private parties but they are taking over this data and entering into a system that is theirs. Now isn’t all of this data virtually their intellectual property rights even by default? Isn’t this a fundamental rights violation of the privacy of these 700,000 title owners? What if suddenly these private entities decide to suddenly close shop & leave with the data and this data is used against or to the disadvantage of these 700,000 owners, what will or what can the GoSL do on behalf of them?  These are very serious scenarios that we cannot afford to brush aside thinking that nothing will happen. We are dealing with a country that in its own website carried that $10m was given as part of MCC and now when the Gunaruwan report pointed this out as well as the amounts not being entered into the State records, the embassy website has deleted the entry of this news item.

And even twitters that no such monies had been disbursed 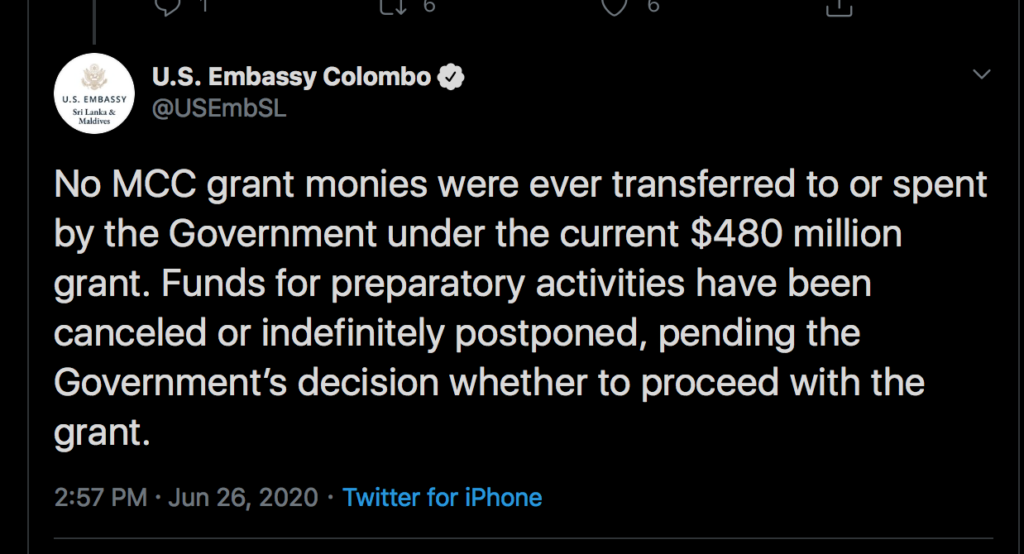 MCC slide 6 proposes to establish a Land Policy Body. Didn’t no politician or official tell MCC that we already have a National Land Policy Department in the Land Ministry?

MCC wants to establish a new entity where its MCA-Sri Lanka private company will set policy for a sovereign country, probably ending up inviting all the nefarious local and international NGOs/civil society to be part of it.

How can the Land Policy Research Council be ‘independent & national” when its head is a private company (MCA Sri Lanka) and its members are private sector? Where is the voice of the public officials, the lawyers, the people?

Please look at the 8 slides that were shown by MCC on 25 September 2018 to understand better. Think for yourself the scenarios Sri Lanka & its people and even an elected government will find itself when there is a parallel policy making body functioning above it. 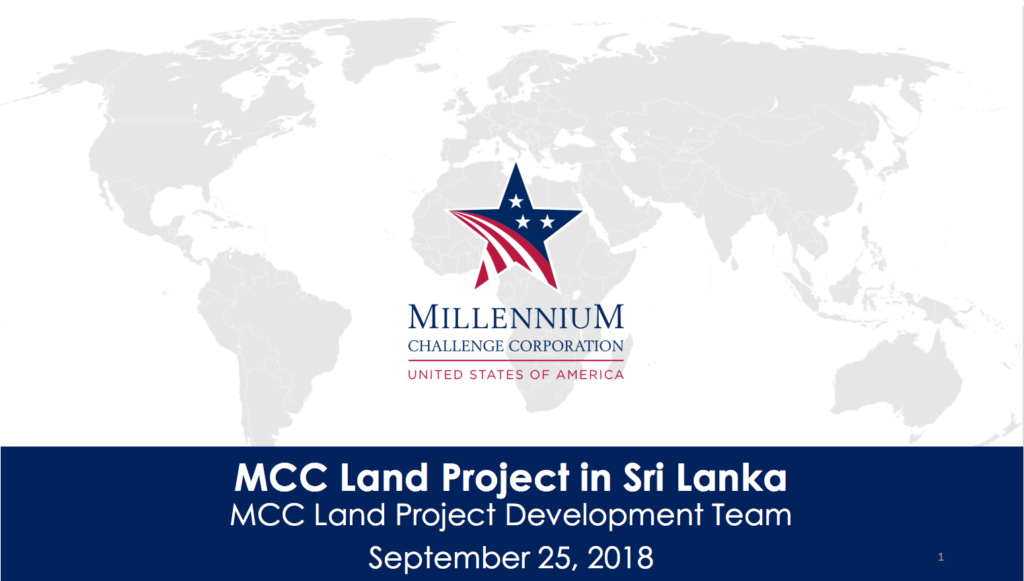 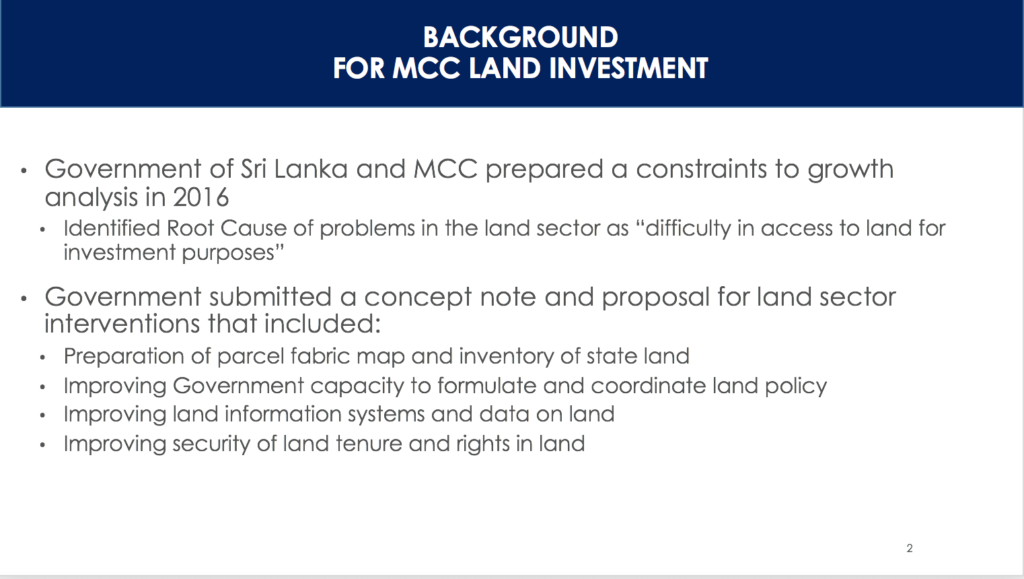 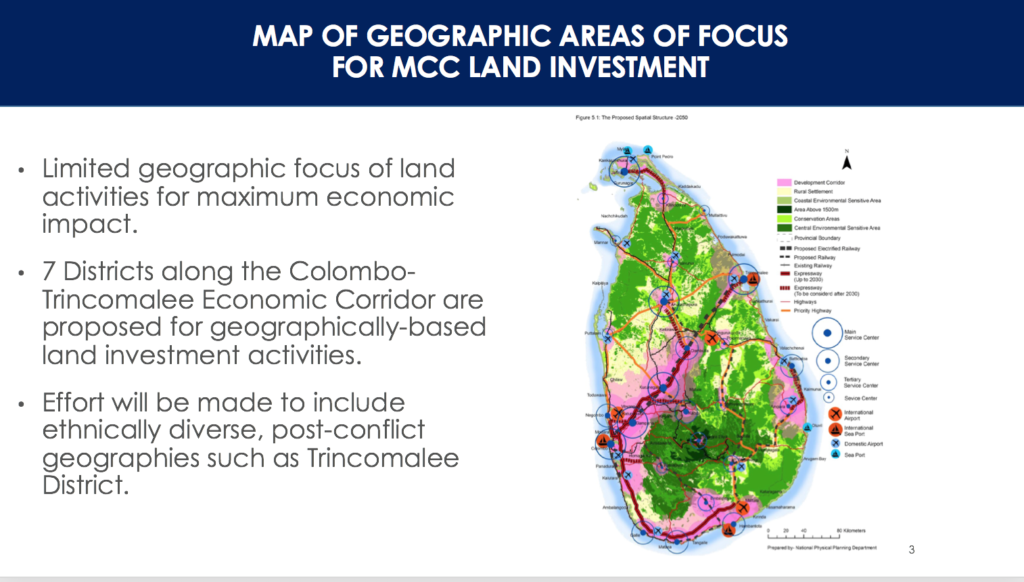 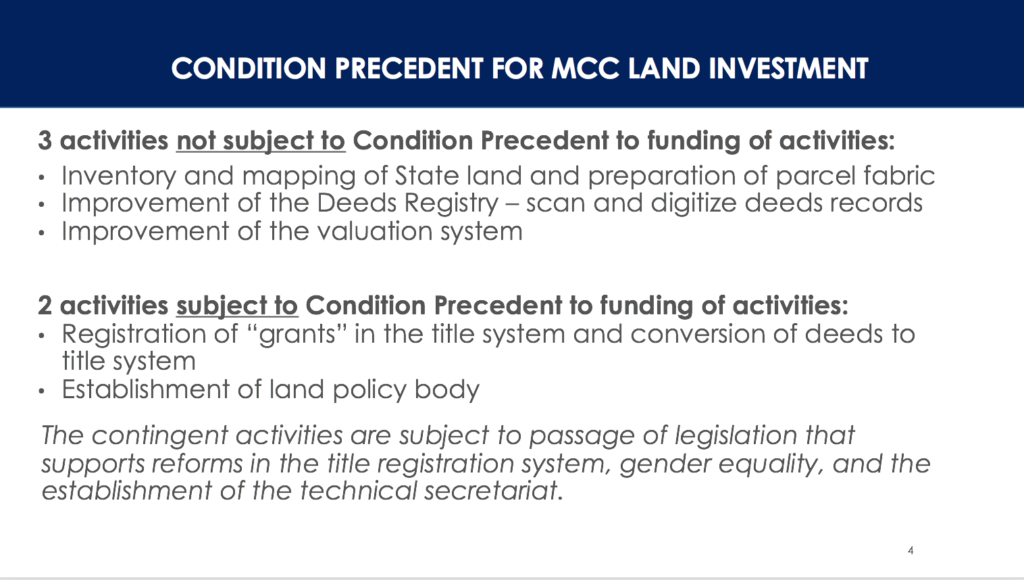 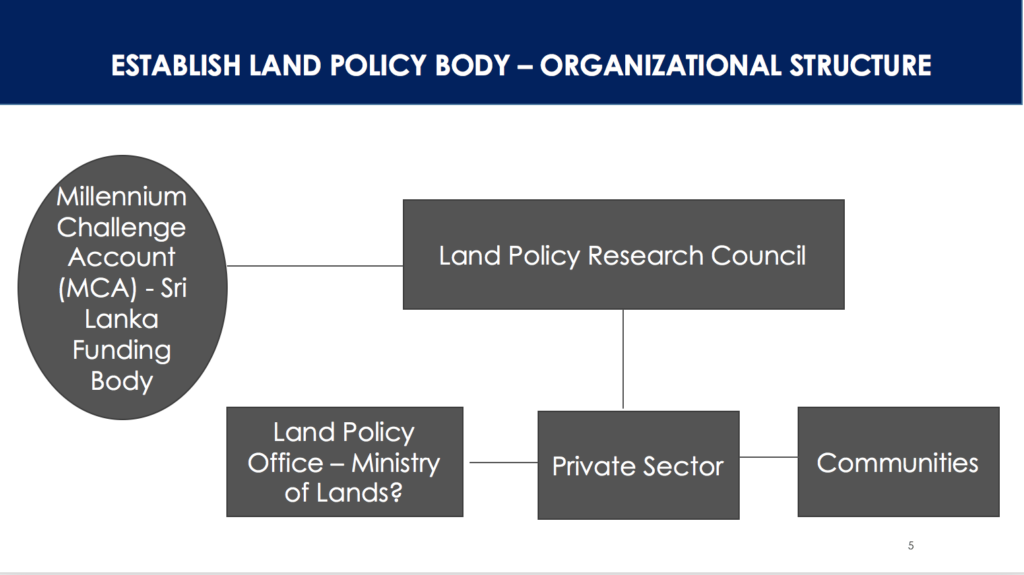 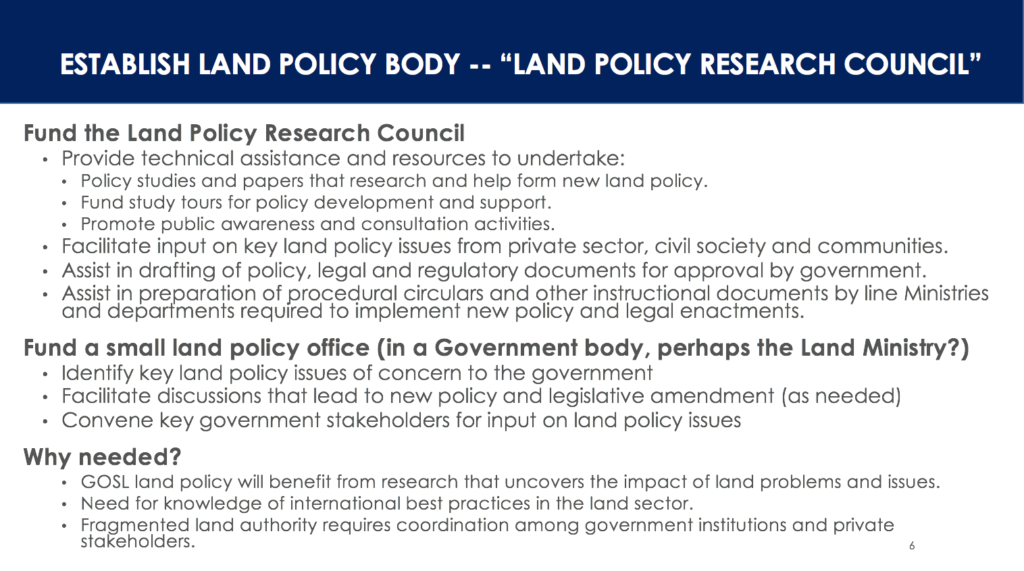 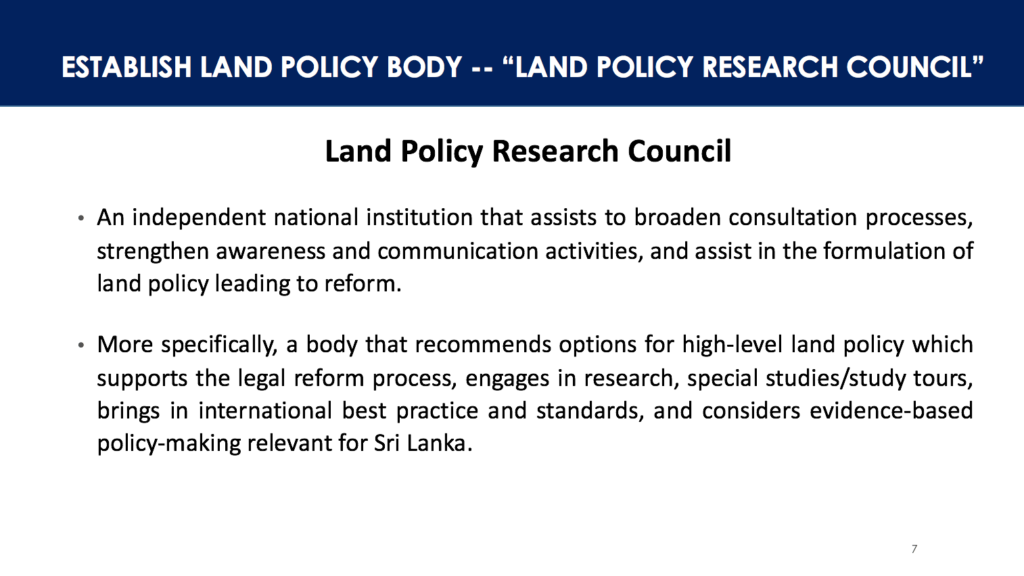 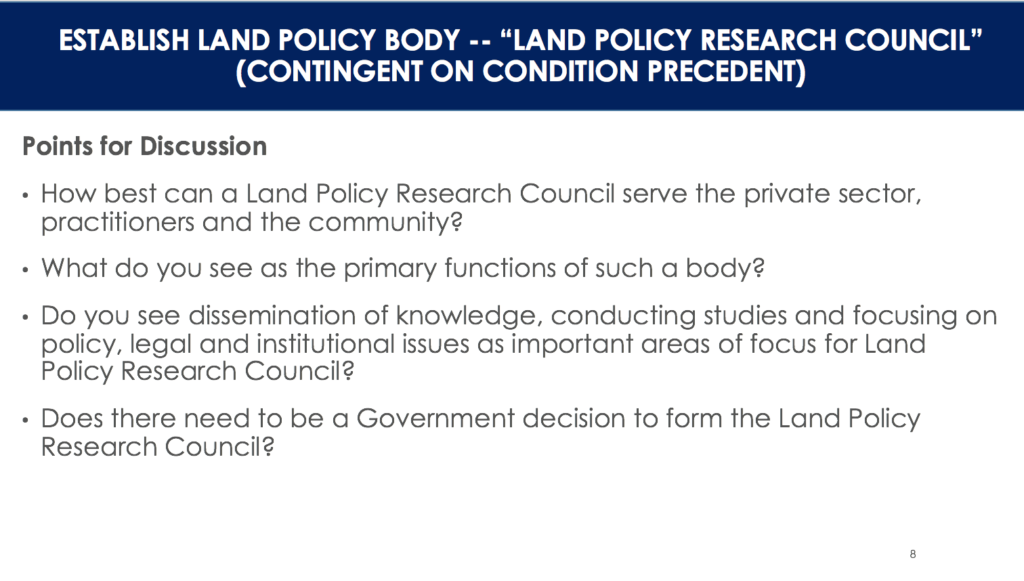 Sri Lankans must worry about the 3.9 Intellectual Property clause which inspite of MCC agreement not being signed is valid given that all of the pre-MCC land deed scanning, e-land hub entries and state land bank information are being entered by foreign/private companies into systems owned and operated by them.

Sri Lankans opposed CEPA on account of our IT personnel getting affected. Imagine our entire intellectual property being ceded to US? This cannot be allowed.