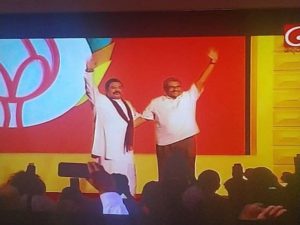 It was one of the finest & most refreshing speeches delivered by former President Mahinda Rajapakse now Opposition Leader and had all the power and verbatim of a national leader. He raised the tempo high enough before declaring to the Nation the candidate whom he said the Nation had already elected. Some of the salient points covered in his speech delivered at the Sugathadasa Stadium is noteworthy.

The President took us back through memory lane from how the SLFP was first formed, the ideological basis on which the SLFP existed and the manner SLFP had weathered political victimization that even included the removal of Mrs. Sirimavo Bandaranaike’s civic rights by UNP for 7 years. To all who lived during this period every word spoken by Mahinda Rajapakse would have brought home emotive sentiments.

He also took us back to the day he stepped down before election results were released and went to his hometown where for months lakhs of people travelled to show the world that they still loved him.

The journey thereafter that began with the formation of the SLPP he credited rightly to Basil Rajapakse. The cheers & applause acknowledged his role.

When President Rajapakse told the Nation that we need to bring back law & order, he reminded all of the law & order lost since January 2015.

When he spoke of the numerous methods adopted to crush their spirits, and defeat their popularity amongst the public, it brought to mind the string of revengeful politics that was always part of UNP ideology.

When he spoke about the imprisoning Maha Sangha & Armed Forces personnel and victimizing SLFP supporters, the people’s minds were taken back to all the revengeful incidents that happened since January 2015.

When he spoke of the 19th amendment and highlighted how a constitution was amended to prevent 3 brothers from being elected by the People – the reality dawned on how and who was part of this set up.

When he said that inspite of the victimizations, vengeful politics and revengeful acts, that he or his family did not betray the Nation’s sovereignty for their independence, it was nothing other than the truth.

While the UNP 24×7 and their supporters threw mud & humiliated the Rajapakses – President Rajapakse did not utter a word against them.

When President Rajapakse said that this government has attacked all religions, all religious heads and humiliated them – Buddhists, Catholics/Christians, Hindus and Islamic adherents would have all nodded in silent acknowledgement.

When he said that hate-filled revenge politics had lasted long enough & must be put to rest – it was a sentiment we all wanted to hear.

President Rajapakse also took many on a guilt trip … he roared…

When Hambantatot Port was put for sale

When even betal leaves were taxed

When people had to wait in queues for petrol

When people suffered from natural disasters

When garbage piled & the stink became unbearable.. People remembered us, he said

When this government began delaying elections .. people remembered us

When bombs went off … all communities remembered us

These victims had no solace – the SLPP is for them and the thunderous applause was enough.

President Rajapakse went on to say that the lifespan of the Government was no almost over.

Time had returned faith in them and had absolved them but he reminded the Nation that what happened after January 2015 had reversed all that they had accomplished since 2005 and that a new government was retaking a destroyed nation, a nation that was not the same as that handed over in January 2015. It brought home a lot of realities to the People.

He brought relief to mothers when he said a new government must put an end to mothers guarding school, it was the task of the law enforcements not parents. He mocked at the manner that the present government had said Rs.100,000 would be given for every dead child. He said that national security must return so that all religions can practice their faith without fear.

We don’t need a government who tells civilians to look after national security, he said.

President Rajapakse said that the Nation has been seeking such a leader since January 2015 and he too was aware of what the Nation was seeking, but he went on to say that his decision didn’t matter because the People had already chosen their to be future leader, that person has already won the hearts of the People, whatever the government has been doing against him has not spoilt their hope in him.

President Rajapakse next declared, that just as his ideology was to put the Nation – first, second & third … Gotabaya must also put the Country & Nation first at all times.

Thus, President Rajapakse handed over his brother Gotabaya as Presidential-candidate of SLPP and the rest of the story will be written by the People of Sri Lanka.