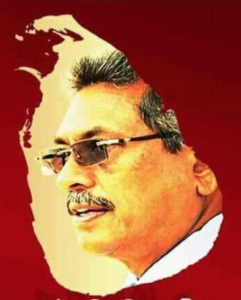 It was a moment many had awaited with much impatience. ‘My choice didn’t matter – the Nation had already selected & elected him… My brother is yours” was enough to put to rest any doubts. Gotabaya Rajapakse was thus declared the Presidential nominee of the SLPP a party formed & steamrolled into public popularity after the 2018 local government elections. A very dignified and articulate speech was delivered by the former President & present Opposition Leader, Mahinda Rajapakse. It touched every area that needed to be touched and set the tempo for the grand finale and then came the Nation’s new hope with what no one expected was to become his National Policy statement.

Gotabaya Rajapakse articulated his speech well and was perfectly suited for the occasion. It was toned to show what he would do, was acceptable and believable.

As Mr. Gotabaya Rajapakse said, the country was at a very decisive juncture – it was nothing anyone was not aware of. The country had been misled, misused and manipulated by those that had orchestrated the January 2015 regime change. It was only natural that the patriotic and national-minded individuals and organizations would search for an alternative leader. Thus, Gotabaya Rajapakse acknowledged the trust placed in him by the Maha Sangha and the citizens of Sri Lanka for that role. He pledged to encompass the hopes of all Citizens on behalf of the Nation. That pledge received a resounding applause.

Gotabaya Rajapakse reminded the Nation of his 20 year’s services in the armed forces and the note by late Gen. Cyril Ranatunga who had inked in pen that Gota was one to take any initiative & complete it over and above the line of duty. This he proved throughout the 10 years he was tasked to handle the most challenging roles as Defense Secretary throughout the conflict & thereafter. That role, everyone knows he did with exemplary acumen unmatched by any of his predecessors.

The listeners were automatically taken back to his post-conflict role in a quest to beautify Colombo and suburbs turning Sri Lanka’s capital into one of the most beautiful cities in the world & gaining international recognition for it.

As Mr. Gotabaya Rajapakse rightfully said – not only does the country need a leader with a vision but a leader who can plan & complete that vision. Everyone knew that as Defense Secretary and throughout his post-LTTE defeat role he had shown to the Nation that he was a man with a vision and a man who could turn that vision into action and complete the action within a short time.

SLPP’s Presidential Candidate covered some very sensitive areas with finesse placing confidence in the People that he would :-

“I will take responsibility for you & your children’s safety’ was all that parents wanted to hear and People sighed in relief that they were now safe.

Gotabaya Rajapakse did not forget the history or heritage or the place of Buddhism in the ethos of Sri Lanka when he said that the 2600 written history had taught to respect all other communities and religions and that would be the basis of his rule. Inspiring people further he declared that Our Unity was Our Strength and we needed to nurture that & certainly that meant we needed to remove the obstacles that were trying to divide the Nation & its People. In so saying he immediately declared that he would not allow or tolerate extremist terrorism and that gave further confidence in him to the People.

Environment was a topic close to everyone’s heart and to declare that under his government he would protect environment and sustainability was welcome news just as much as the commitment made to reforestation. The Green Town concept and beautifying towns and cities that began with Colombo would continue across Sri Lanka under a Gota Rule.

He took listeners back at the period 2005-2014 and the development that took place and that would continue to take place once again and everyone realized that the development had stalled and stopped after 2015.

For any country to develop the economy must be handled well. Mr. Rajapakse assured that the new economic environment would synergize with the local economy under the concept ‘Gama Samaga Pilisandara’ and that under the Eliya & Viyathmaga programs meeting rural people and tapping their wants and needs, he was well placed to set a program that would result in success – economic liberty, respectful living, safe environment, people-centric economy, human resources put to best of use, innovations, talents & skills given due recognition and all these would affect better employment and new jobs opportunities. An area that has been under much scrutiny has been agriculture and it was welcome to hear that agriculture would be developed and sustained further just as transportation, road, rail, school, water, village development and work from home using technology would also be areas that he would address.

He gave much promise to youth who are looking at their own future and youth have much to look forward to.

Another hot topic that he gave a policy statement for was the role of the public sector and he firmly committed that it should be devoid of political interference with promotions on merit & skills.

Before ending his policy statement SLPP’s Presidential Candidate raised the bar in requesting that his campaign should be one of total discipline – no revenge, no hate, no vengeance, no polythene, no lies, no mud-slinging, no counter arguments but one based on truth, logic & facts.

He assured that he would set an example as a leader should and that Sri Lanka would soon rise up to greatness that existed during ancient times.

Thus spoke a Real Leader and Hope was reborn among all Citizens.