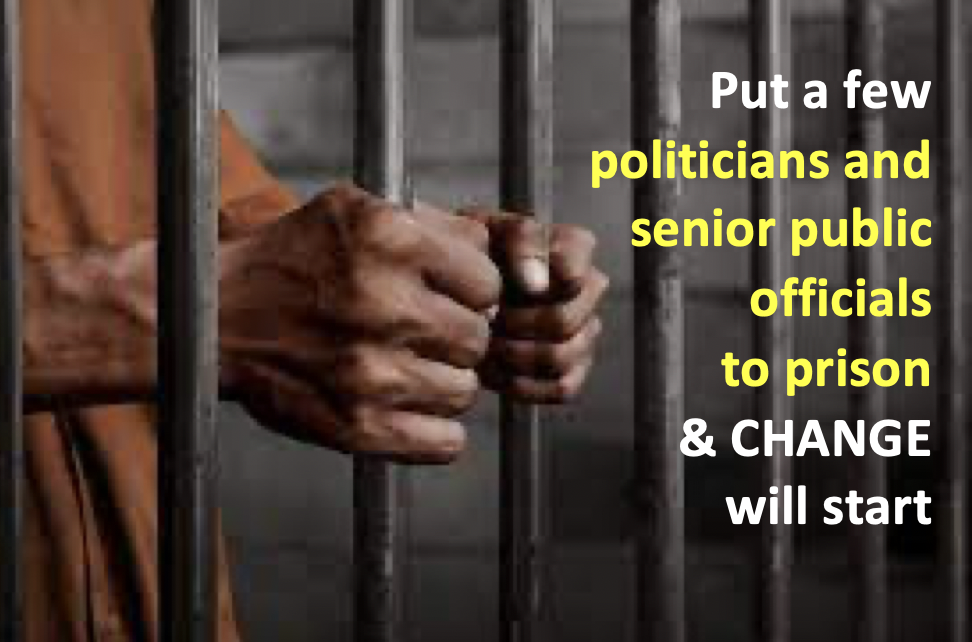 The problem does not lie in the constitution (only clauses that have been inserted in self-interest & not in national interest) or the laws but in its application & by those required to abide by the laws. Society starts to crack & governance starts to suffer when people manipulate the system, corrupt the system & betray the mandate given to them. Politicians and Senior Public Officials (judges/lawyers/Senior secretaries etc) are a key source for the decline in society. To clean the stables, action must be taken against them first.

The legislative is the pillar tasked to enact policy. When they are corrupt how can policy be enacted?

How do we set about this? Is there a local mechanism to catch corrupt judges/lawyers? If so, this has to be done first & rope in the corrupt judiciary/legal system.

Once this is on track … then an uncorrupt judiciary/legal framework is in place to catch the next 2 layers of corruption – the politicians and the public sector.

The politician has forgotten that they are elected for a term to serve the people. Once in power politicians and their families think the people have to serve them. To bring them down to earth, immediate revision of salaries/perks & remunerations must take place.

Politicians must spend a key component of their time to strategize on the portfolios & tasks given to them.

The public servants have thus far gone unnoticed and they have found it convenient to hide their corrupt nature behind politicians. Often the politician has had to take credit for corrupt actions of these public servants. From the Central Bank to the smallest state officer – the senior officials/secretaries must be investigated – their assets, their bank accounts, their properties etc must be looked into & legal action must be taken against them.  Their salaries and perks are often far more than what is officially allocated to the politician.

These senior officials have not only indulged in corrupt ways but have even betrayed the nation, giving wrong advice to politicians, even working & being paid by foreign governments & their intel & other entities. We have seen how they have chosen to ignore Sri Lanka’s interest when discussing draft bilateral or multi-lateral agreements. They have given wrong information and wrong interpretations to the clueless politician and as a result, Sri Lanka has had to face numerous detrimental deals which had required national opposition to put a stop to. This cannot be allowed to continue. These officials are far more dangerous than the politicians as they know ins and outs of the documents/circulars and know how to escape through the loopholes. They must be punished with legal action even imprisonment.

One or two senior officials sent to prison even if they are now retired will scare the rest into continuing their corrupt ways.

This is one of the major reasons for Sri Lanka to be mismanaged and to be administratively corrupt. Enthusiastic initiatives and proposals have gone unattended or not given the due recognition they deserve because these entrepreneurs did not have the means to palm the hands of the public servant or the politician. How many out of the box solutions, Sri Lanka would have lost because of the corrupt ways of the politician and the Secretaries? This cannot be allowed to go on.

There is nothing wrong with a system unless it  has been purposely designed for corruption. The issue lies in the corrupt who are tasked to administer the system. The corrupt seated in Parliament & the corrupt secretaries that surround them or the corrupt officials that head the departments from Central Bank to the Foreign Ministry (the two highest paid places with perks & privileges above others) to the other departments where scope for corruption prevail because the people are also corrupt – then we weave a corrupt society that is likely to erupt at some time or the other. This is what has happened.

The alarm bells were ignored. Those tasked for roles preferred to lead a cushy life ignoring the impending doom, politicians did not check or verify the recommendations given by the secretaries and Sri Lanka was slowly walking into a major crisis. This is what has taken place.

It is important for politicians to firstly be conversant in politics, history & national dynamics, geopolitics and more importantly the subject matter that they are tasked with. They should not leave it to the Secretaries to handle. They must learn to question them, double check advice given. The politicians must take a leaf out of President Premadasa’s administrative prowess. At 4a.m. he wakes up officials and demands briefings. Similarly, there have been excellent public officials particularly prior to 1978 and the caliber of their work ethics is something present day Secretaries should strive to emulate.

Send a few corrupt politicians and public officials to prison, investigate properties/land/houses etc of public officials and question them & have a mechanism to monitor them – the corruptions will automatically stop for fear of having to pay legal fees or landing up in prison.

For these to take place the Judiciary & Lawyers cannot be corrupt themselves.