Can rejected Ranil transfer powers of the Executive President to himself? 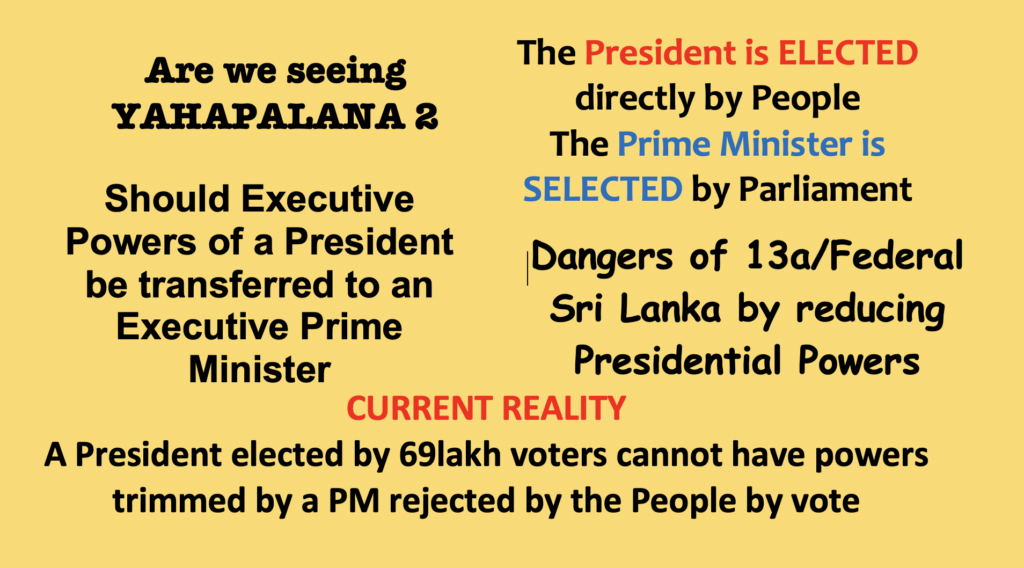 This is the question everyone should be asking. To answer this we need to return to the regime change & coup that led to the January 2015 Presidential election of Maithripala Sirisena as President & the swearing in of Ranil as PM without removing the sitting PM D M Jayaratne. With this technicality unsolved, a bogus “national government” was created with the 19a that controversially attempted to transfer the powers of the executive president to a controversially seated prime minister. Parliamentary Elections were eventually held in August 2015 only after Parliament was hurriedly dissolved before COPE could make some startling revelations. While numerous objections were filed against the 19a, poignant is the determination by Chief Justice Sri Pawan that a referendum was required in order to transfer powers from a President (who was directly elected by the People), to a Prime Minister who was only selected by 224 member Parliament. So this judgement plays a significant role in 21a or any other attempt being made to usurp the powers of the President & transfer to Prime Minister/Parliament.

We therefore, cannot put aside the regime change attempt to make constitutional changes between 2015-2020 and many other attempts to dilute the sovereignty of Sri Lanka, providing open doors for nations to interfere in Sri Lanka.

President Sirisena eventually understood the dangers & decided to put a stop as even land was being compromised through electronic systems and the MCC. In an address to the Nation, President Sirisena clearly disclosed why he was removing Ranil as PM. This speech is extremely relevant as to why PM Ranil was removed & Mahinda appointed as PM. He ruled for only 52 days, leading to the return of Ranil as PM with full backing of US-EU and alliances. PM Mahinda was ousted in May 2022 to again return Ranil as PM.

Not surprisingly, the same players that supported the regime change, plotted to bring Ranil to power & introduced the 19a are once again in action to push for 21a that seeks to fulfil the unaccomplished task of abolishing or transferring Presidential powers to PM. Are we watching Yahapalana 2?

Sirisena ceded Presidential powers in 2015 simply to sit as President, Gotabaya Rajapakse it appears is knowingly or ignorantly ceding powers or being forced to cede Presidential powers! Sirisena woke up & prevented any major changes & it is now time for Gotabaya to do the same. Unlike Sirisena, much was expected from Gotabaya & 69lakh people deem it his duty not to break their trust & faith in him.

Ranil became PM controversially in 2015 and controversially again in 2022. The situation in 2022 is bizarre because not only did Ranil lose the General Election, his party could not win a single seat and thanks to the proportional representation system, one national list seat was allocated to the UNP. After months of tug-of-war with national list nominees demanding that single slot, rejected Ranil broke democratic principles to enter Parliament.

Fast forward to May 2022, PM Mahinda knowingly or unknowingly ends up getting an unexpected ‘farewell’ by having to give up his premiership, after a coup within his own camp forced him to resign as PM. It would be good for PM Mahinda to find out who betrayed him from within.

Be that as it may, Mahinda resigns as PM and then suddenly Ranil returns as PM again. How did a man rejected by his own vote base, enter Parliament immorally through the backdoor as a national list MP being the only representative in Parliament, hooted from his own former UNPers now seated in SJB, become the Prime Minister of Sri Lanka for the 6th time?

These are democratic case studies!

If this is yahapalana 2, it was no surprise that the stage was set to return Ranil, initially with the creation of the GoHomeGota gama, by a bevy of Colombians, Bar Association, JVP, FSLP, Sisters & Fathers of the Church, LTTE Diaspora, NGOs, Muslim groups – the same coterie that has always backed Ranil (though shy to openly say so).

On the face of it the “aragalaya” was used as a platform to further the “hora” “hora” campaign kicked off in 2014, resulting in regime change which created an illegal FCID and eventually that led to a Presidential Commission in 2020 on victimization during 2015-2020 – isn’t it strange that the Bar Association proposals on the economic crisis is recommending the annulment of this commission together with its recommendations! Ask yourself what does this have to do with an economic crisis! 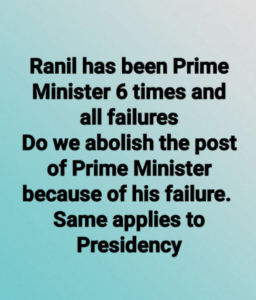 The “aragala” project will soon close shop, as another set of players are tasked to take over.

While fanfare began about “corruptions” – the slogans are suddenly only about 21a. Was this the ultimate goal? Why is there little emphasis on ‘anti-corruption’ ‘tender process procedure’ ‘moratorium on siphoning resources & assets’, parliamentary ratification process, procurement criteria? If people of the ‘aragalaya’ are so concerned about the Nation, why are they not demanding a stop to the sale of assets & resources? Why are they not highlighting that a government is only temporary custodian for a term of 5 years? Why are they not highlighting the importance of national security?

Part of the overall project appears to be to degrade the police & armed forces & demoralize them. The manner selected groups have been tasked to ridicule the uniform, showcases how well the campaign has been orchestrated to corner every individual/group that puts the Nation first and attempts to protect the interest of the Nation. Everyone who looks at issues from the prism of what benefits or what is disadvantages to the nation is being targeted.

Ranil took over as PM claiming to solve the economic crisis. The constitution has nothing to do with the economy & should not be touched until there is stability in the country. People’s minds are diverted to home problems, is this why these constitutional changes are being hurriedly passed as part of the unfulfilled plans started out in 2015?

As citizens, we must take a Pro-Sri Lanka stand. Petty political alliances should be set aside. In a national crisis, the interest of the Nation must come first.

It is important for people to realize the dangers of passing Presidential powers to a Prime Minister. President is Commander in Chief of the Armed Forces, passing this role to Parliament means in a crisis, a decision cannot be taken unless majority in Parliament agree. With the 13a in force & demands for police & land powers, every President has withheld giving these powers knowing its ultimate outcome.

The sitting Prime Minister, no one should forget signed a controversial cease fire agreement in 2002, this document remains secret & out of public domain & handed territory to terrorists confining the armed forces to barracks. This same PM, allowed the co-sponsorship of UNHRC resolution with the state accepting war crimes by our armed forces. This same PM was always reluctant to end the war & has never backed the armed forces.

Inspite of people’s attention being diverted, the judgement by CJ on presidential powers requireming referendum needs to be revisited.

We are having a situation where a person elected as President by votes of 69lakhs of people are subtly being transferred to a prime minister who has been rejected by his party. In such a scenario why should the President have to take advice of such a PM?

Article 154(b)(2) where the President rules through the governor will also result in this unmandated PM deciding on crucial matters of national security importance.

With an unsolved economic crisis, Sri Lanka cannot walk into another political and constitutional crisis as a result of personal political goals aligned to external lobbying by geopolitically interested parties. Protestors are all demanding a solution to the economic crisis. No one is asking for constitutional amendments, therefore MPs must raise this concern in Parliament. Naturally, the MPs have been subtly neutralized by attacks on their homes as a tactic to make them not object to the constitutional googly’s being plotted.

19a was drafted to specifically fit 2 persons brought to power. This is why attempts were made to transfer powers from President to Prime Minister introducing clauses relevant for the Presidential rule of only Sirisena. How can such draft insertions hold national interest?

Personal aspirations cannot be a flag carrier for constitutional changes. This is why until the country is stable economically, no changes should be hurriedly passed.