Questions to UNSG/UNHRC: Who killed 6261 soldiers during the final phase – LTTE or Tamil Civilians or Others? 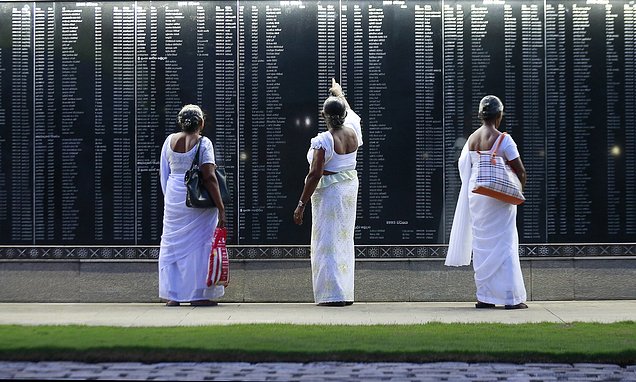 Mothers of fallen Sri Lankan government soldiers check for the name of their sons engraved on the national war heroes memorial in Colombo, Sri Lanka, Friday, May 19, 2017. Sri Lanka marked the eighth anniversary of the end of its bloody civil war on Friday with much of the legacy and divisions created by more than quarter-century of violence still intact. (AP Photo/Eranga Jayawardena)

During the last few months before the end of the LTTE ground force there were 3 players inside the theatre of war – the Sri Lankan Armed Forces, the LTTE and Tamil civilians and the possibility of South Indians also fighting needs to be ascertained? We know that 6261 soldiers died between 2006 and May 2009, we know that close to 300,000 people were saved, we are told that a figure between 40,000 to 200,000 had been killed whom accusers say are ‘civilians’. All these figures are confusing but we need to know how many were LTTE and how many can claim to be civilians and how credible is the evidence of the accusers.

Sri Lanka Military records reveal that 6261 soldiers died during the last phase of the conflict (Eelam IV). Their details – names, date killed are all available. How they got killed and more importantly who killed them is never answered. They had to have been killed by either of the 2 other parties inside the theatre of war – the LTTE or Tamil Civilians. However we also know that the LTTE had an auxiliary force called the “Makkal Padai” comprising 2 branches (Eelapadai & Gramapadai). These units blurred the distinction of who was a civilian and who was not – at least 10,000 of the Tamils claiming to be ‘civilians’ were trained as  combatants and are automatically denied civilian status.

Eelapadai – comprised 5000 volunteer civilians who were homeguards and later used during the final conflict. They were on LTTE payroll.

Therefore, all those who turned up at the Army civilian medical centres and IDP receiving points (between Jan-May2009) cannot be categorized as Civilians – they may have been LTTE in civil or civilians who were part of the LTTE auxiliary force.

What is confusing the scenario further is the question of whether South Indian illegals also fought on side of the LTTE. We know for certain that illegals from Tamil Nadu were consistently arriving in Sri Lanka which is why we cannot make sense of the population and the births and deaths do not match as a result. Since 1981 proper census was not done. Most of the officials in the North were under LTTE influence. People on state payroll were also working part time for the LTTE. Others were too scared of LTTE and in such a scenario doctoring of figures by the grama sevaka and the AGA to suit LTTE cannot be ruled out.

This is confirmed by UTHR (J) report that gramasevakas of Kilinochchi and Mullaitivu were working very closely with LTTE.

“From the 1990s the LTTE has used the headmen under its control to police the people, force them to attend demonstrations, perform compulsory military service as auxiliaries, impose punitive cuts of rations, diddle government aid and report on those coming in and going out…”

“They [the LTTE] got the lists of IDPs from the GS [grama sevaka, a village official] – every family had to register there – and then visited every family several times. If anybody tried to hide their sons and daughters, they would come back at night and search the house”

We also need to know how many of the above died naturally.

The numbers do not add up.

What we need to know is

What we need to know is

According to ICRC Rule 5. Definition of Civilian / Civilian Population

The phrase “civilian population” within the meaning of this Convention shall include all those not enlisted in any branch of the combatant services nor for the time being employed or occupied in any belligerent establishment as defined in Article 2.”

The term “belligerent establishment” is defined in Article 2 as “military, naval or air establishment, or barracks, arsenal, munition stores or factories, aerodromes or aeroplane workshops or ships of war, naval dockyards, forts, or fortifications for defensive or offensive purposes, or entrenchments”.

LTTE violated the customary law principle in Article 51(7) of Additional Protocol I to the Geneva Conventions by using civilians and protected spaces for military purposes thereby making those spaces legitimate targets to the opposing side. LTTE is faulted for endangering civilian lives and infrastructure as they are prohibited from using civilians.

In the light of the above how many Tamils can be termed as ‘civilian’?

How many Tamils belonged to ‘helps/contributes/advances’ the military ‘goals/objectives’ of the LTTE? (these activities include sentry duty, building bunds, bunkers, trenches, transporting military material, even carrying dead LTTE cadres) if so these Tamils cannot be given protection of ‘civilian’ under international law in a conflict.

LTTE forced the Sri Lankan Military to forego attacks on legitimate targets in order to protect civilians held by LTTE or forced the Sri Lanka Military to change tactics which resulted in troop casualties which ICRC South Asia Head in July 2009 admitted. It also forced ground commanders to weigh legitimate military objective against the injury to troops and take decisions.

The Committee Established to Review NATO Bombings in Yugoslavia made clear that the decision of the Military Commander in deciding military advantage is held above that of any human rights lawyer. Just because some say casualties could have reduced if a,b,c was adopted it does not become any war crime.

The PoE itself admits that soldiers risked their own lives, helped countless ‘civilians’ attempting to escape war zone and ended up incurring heavy troop casualties to rescue over 100,000 people.

What is important to note is that civilian casualties in an armed conflict even significant in number does not establish any violation of international law as per doctrine of ‘proportionality’ in scenario of incidental injury and collateral damage. Such deaths though unfortunate were never intentional or planned (LTTE keeping civilians and firing from among civilians was planned and intentional)

Harm to a civilian cannot automatically become illegal. Illegality comes in determining those who violated the laws of armed conflict and the principles of distinction & proportionality. Clearly LTTE violated.

Let’s also not forget that the figures of dead emerged only after December 2009 after the UTHR(J) claimed “tens of thousands killed” during the final months of the conflict. Between December 2009 to December 2012 even after the PoE there was NO EVIDENCE to support the figures quoted as being killed (neither credible allegations nor credible evidence)

What is clear is that no one can establish the actual population figures before the last phase to establish the number of dead as against the number saved and how to differentiate LTTE from civilians. Confounding the matter further is the possibility that population and LTTE cadres may be further obliterated by South Indian illegal populations and fighters too. No one has researched this aspect.

While the propaganda networks are spinning lies and fairytales, and UN officials are doing their best to bring to the dock Sri Lanka’s military claiming the army killed civilians without touching on how many LTTE cadres were killed or making no statement on the 5000 missing soldiers, we should not allow them to get away by namecalling and slandering.

Who killed our soldiers?

How many LTTE were killed and how can UN establish the 40,000 as ‘civilians’ and whether these deaths were outside of the legally accepted proportionality/collateral damage to claim as war crimes. UN cannot sling mud and start tribunals just so that their people can secure jobs every time new offices are opened. All of the UN tribunals when scrutinized reveal to be nothing by while elephants not doing any justice to the victims. Sri Lanka must refuse to be another victim of UN systematic lies and distortions.

There are plenty of loopholes in all of the UN/UNHRC reports/panels and their findings. They have opted to rely on LTTE fronts, LTTE propagandists and LTTE sympathizers for their ‘witness’ accounts. All these third party, 4th party versions have been brought to ZERO by Maj. Gen. Kamal Gunaratne’s book – Road to Nandikal which exposes all the lies. UN / UNSG and UNHRC should feel ashamed.