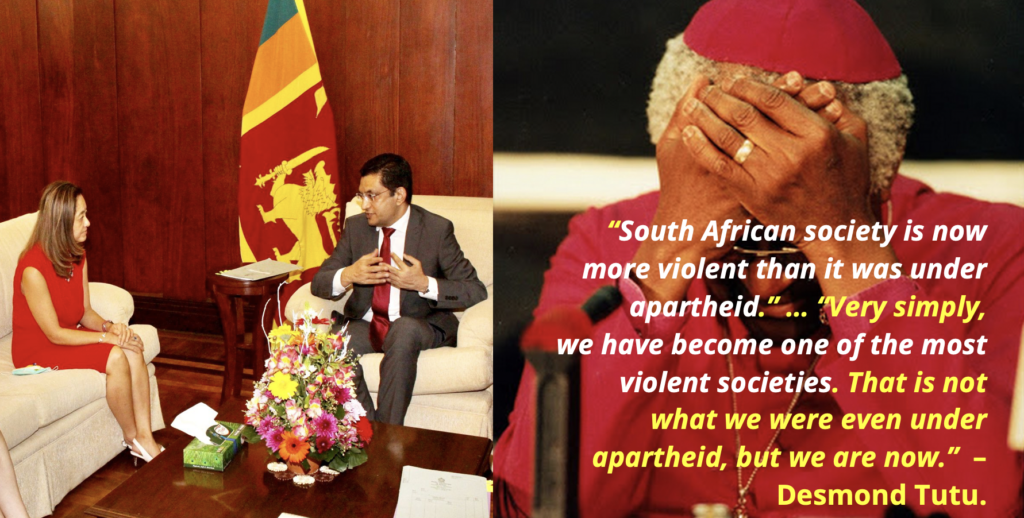 Sri Lanka is making fundamental errors if we compare Sri Lanka’s problem with that of South Africa. Sri Lanka faced a non-international armed conflict by armed combatants who terrorized all communities & sought to separate Sri Lanka by gun. South Africa faced an apartheid issue where invader whites were discriminating native blacks. South Africa’s TRC covered only human rights abuses between 1960-1994 completely ignoring the root cause of the problem. If Sri Lanka were to go into the root cause of the problem, many of the countries promoting reconciliation for Sri Lanka will also have to face the dock. South African Commission itself revealed in 1999 that it had failed. In April 2013 head of South Africa’s Truth and Reconciliation Commission declared that “South African society is now more violent than it was under apartheid.” … “Very simply, we have become one of the most violent societies. That is not what we were even under apartheid, but we are now.”  – so said Desmond Tutu.

TRC offered amnesty to 849 out of 7112 applicants for admitting to their atrocities. Reparations were recommended to victims. All that the perpetrators had to do was to say ‘sorry’ & all was forgiven even politicians responsible went scot-free while victims remained without adequate reparations. This was because, TRC commission members had the powers to grant amnesty but were not given powers to implement reparations. The commission proposed that each victim or family should receive approximately $3,500 USD each year for six years.

TRC has failed to right the wrongs to blacks of South Africa. The whites continue to own majority of resources, while blacks live in densely populated areas with inadequate infrastructure & resources. Rich white minority vs Poor black majority rule continues.

TRC facilitated perpetrators to simply apologize without being held accountable.

The TRC Commission was allocated a budget of $36million (24 months) but where was the justice for the victims?

In Sri Lanka restorative justice for LTTE is being promoted while retributive justice for Sri Lanka’s national army continues within the halls of the UN via UNHRC Resolutions which continue even a decade after the conflict ended. Where is the ‘forgiveness’ that is being preached?

Change from white minority rule to black majority rule came with compromises & concessions to the whites – they demanded amnesty, no justice & accountability for their human rights violations. An interim-constitution had to be created to accommodate this.

New legislation was to open room for select civil society activists/NGOs and the Church – the same innuendos happening in Sri Lanka.

South African TRC was given only 24 months to complete its task – whites had 6 positions, 7 women which included the Chairperson & 3 Christian ministers. Presuming the argument is that South Africa is majority Christian – how would the world react if a Commission in Sri Lanka comprised Buddhist clergy or Buddhist clergy only?

Why should forgiveness or repentance be dictated by the Church? The white oppressors were afterall Christian!

Desmond Tutu himself was a Christian preacher. He was also signatory to many letters against Sri Lanka to Geneva demanding accountability. Hypocrisy of Tutu – preaching reconciliation in South Africa but demanding punishment for Sri Lanka.

Bulk of the ordinary South Africans who were direct victims of apartheid repression had not been consulted during the legislative drafting process.

The inclusion of fundamental rights to South Africans resulted in perpetrators seeking protections under new laws, leading to many legal issues.

If South Africa’s TRC was a Christian confession system (confess sins & be absolved)– why should Sri Lanka’s foreign minister wish to follow the same?

Why should Sri Lanka be co-sponsoring any resolutions that seek to punish our national army?

South Africa’s TRC came not through punishment for crimes committed or examination of systematic oppression as none of these were addressed. South Africa’s TRC did not hold hearings on land issues, education system, migrant labor system, role of companies that collaborated with & profited from apartheid either.

This same model is being promoted to give priority to whitewash LTTE of all its crimes while holding the Sri Lankan national army to account. What LTTE did, who took part in LTTE crimes, who helped LTTE & why are not to be addressed. Is it because the one’s seeking “truth” want to decide what ‘truth’ comes out & what doesn’t.

In Sri Lanka, LTTE terrorists destroyed property & assassinated – if civilian victims of LTTE terror are to be compensated who in the LTTE will pay the compensation to the victims? Why should it be from public funds. It’s like public paying public for crimes committed by another party!

LTTE crimes cannot be forgotten or forgiven by simply saying sorry, while the State ends up paying compensation to the victims & to the LTTE combatants!

South Africa’s stock exchange is held by only 10% blacks, less than 10% lands have been transferred back to blacks. Another 30years will go to recover 30% lands to blacks. By this time those waiting maybe no more.

These reconciliation and truth is nothing but a means to have international bodies dictate to sovereign governments & use past incidents to either blackmail or hold govts to account. As we can see every resolution against Sri Lanka in the UNHRC has nothing to do about the conflict or the victims except to demand legislative changes.

If Sabry is chanting the same song as all Sri Lankan foreign ministers since UNHRC Resolutions, it only goes to show how sovereign countries & their leaders buckle down to pressure & makes a mockery of the UN Charter & the bogus clauses that get annually quoted without meaning a word in it.