Separating Bhikkus from Laypersons: Bhikku’s must enter only Bhikku universities 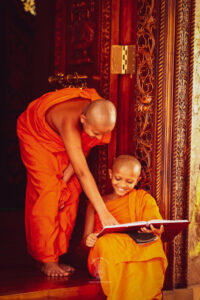 One of the biggest mistakes made post-1978 was to create a lay-focused education system for Bhikkus allowing them to enter universities/institutes with laypersons. This resulted in the decline in the importance given to pirivena education system as well as the Bhikkus. While this is not to discuss or debate on Bhikkus, it is to showcase that there is a difference in lay persons and a Bhikku & a Bhikku is expected to adjust behavior in line with the Buddha Sasana and its disciplinary codes. A Bhikku to journey towards Nibbana requires to detach from lay-society. Since ancient times the kings went to the Maha Sangha for advice & blessings. The Maha Sangha did not go to the Kings. Today, the politicizing of society has even resulted in the political allegiances of the Maha Sangha even in universities. The outcome is nothing that we can be proud of & is detrimental to the continuance of the Buddha Sasana. The GoSL and the Buddha Sasana Ministry must immediately address this & confine Bhikkus to Buddhist universities & away from laymen & universities/institutes for laymen.

Sri Lanka is one of the key countries where Theravada Buddhism prevails. Monasteries have played a key role and has been under royal patronage since ancient times – The Maha Vihara, Abhayagiriya Vihara & Jethawana.

The aim of pirivena education was to create a Bhikku Council while preserving the tradition of Sri Lanka’s classical education. From pirivena, Bhikkus can proceed to tertiary education in the same field.

There are 825 pirivenas in Sri Lanka with close to 70,000 students enrolled. The dhamma schools number over 17,000 with close to 3million enrolled. Vidyodaya & Vidyalankara were converted into universities which produced great scholars.

We have seen student Bhikkus behaving in appalling manner. Whether these are ordained Bhikkus or simply men wearing a robe & pretending to be a Bhikku to tarnish the image of Buddhism, we may need to investigate further. However, had Bhikkus not been studying alongside lay students, such a scenario would not arise.

There are enough and more Bhikku universities dedicated for Bhikkus – the Open Buddhist University, the Buddhasravaka Dharma Peetaya was established under Parliamentary Act no 106 of 1968 in Anuradhapura which became Buddhasravaka Bhikshu University under Parliament Act 26 of 1996. It was a national university for Bhikkus. Students pursued studies in Western & Eastern languages & other disciplines. The university was relocated in 2012 & 2 faculties were opened – Faculty of Buddhist studies & Faculty of Languages & Cultural Studies.

Essentially becoming a Bhikku is to align to the teachings of Buddha, to learn Buddhist principles, to propagate Theravada Buddhism in Sri Lanka & abroad, to research, to promote Buddhist culture & values & more. None of these can be achieved when Bhikkus end up protesting on streets, throwing stones, toppling barricades, shouting in filth, pointing fingers & following lay practices and behaviors. Most often, these Bhikkus who benefit by free education, end up changing their names to lay names at the final exam! Their conduct has given room for people to lose respect and give their respect. Inspite of lay persons worshipping the robe and not the person wearing the robe, the conduct of student bhikkus during strikes and protests are a sight no Buddhist likes to see.

Therefore, in viewing the increase in such behaviors, it is time that the Bhikkus & their education be separated from lay persons and Bhikkus return to Bhikku universities where they can follow disciplines pertaining to the Buddha Sasana. It is left to the Bhikku learning centres to add to the subjects relevant to enhancing Bhikku education, but it is now time the Bhikkus return to Bhikku learning centres and away from education institutes/universities meant for laypersons.

The separation must be made immediately.