There are some harsh realities that Sri Lankans need to accept. We have enjoyed nominal independence since 1948 and artificially celebrate that every year. We ignore that we became a republic only in 1972. We have had 18 Prime Ministers & 8 Presidents since 1948. We have had countless manifestos, policies but the country is in massive debt & now declared default. We have had national plans which get overturned or overruled with each government while subversive oppositions are used to derail good initiatives adopted. We have had a business community who are happy to fund any party that brings xmas goodies for them if they win & we have quite a number of people who fail to think of what suits the nation & get agitated only when their comforts zones get affected. In all this a group of people who get no dividends from any government are getting larger and larger because they have been used only to bring parties to power & saddled with debt.

Every govt from post-independence have failed to draw up industrial/manufacturing plans utilizing our resources for development. This would have set the foundation from education to build a proud nation.

The above failure was due to our colonial mindset & lack of desire to think & act in national interest resulting in following a policy of appeasement which over time external forces manipulated to their advantage. This appeasement policy has turned Sri Lanka into a begging state led to believe we cannot do anything on our own without seeking permission from outsiders. From political parties downwards we are playing to the gallery only. Even many among the rich & educated think from the prism of political bias. Their understanding of world politics, history, external subversive ploys & international monetary systems is such that their opinions are always politicized (pro-party friendly or anti-country)

As a result Sri Lanka finds itself in dire stratis.

This means we have a piling loan deficit to meet.

Let us not forget we have to also pay interest for the loans taken.

But some are ready with champagne awaiting IMF LOAN.

They don’t bother to wonder how much is left for Sri Lankans.

Many are even exploring taking another new loan.

Is taking loan after loan the answer?

Sri Lankans must realize that our problems will get only worse with every new loan.

So the next question is – what is the solution?

We certainly need to repay loans, but why have we not approached the ISB holders (all investment entities) & see how they can assist Sri Lanka by investing in order for them to recover their money as well as enable Sri Lanka to also make profits.

Instead of privatizing SOEs why not divest a component of the state entity & invite investors to turn it around as a joint effort.

Prior to taking any decision on SOEs – it is advised to know what its core strengths & weaknesses are, what is needed to generate profits & productivity. Having identified this & the costs & other requirements, invite investors to join the project to turn it around sharing profits. In this manner the SOE remains under state ownership & both State & Private Party can make & share profits. This mechanism prevents the entire state entity from being privatized. State must ensure it does not foot bill for loses & proper legal advisors & officials are needed. At present public officials appear more corrupt than politicians.

SOEs can create one separate entity or several for the purpose of divesting a target activity. This is called Special Purpose Vehicle created for a specific business objective. Where there is a collaboration with a private company (PPP model) is it best to follow SPV.

SPV’s can be used

Austerity – not how IMF/WB or CBSL wants

Sri Lanka’s economic crisis has widened gap between rich & poor. The rich refuse to cut down any of their comforts & happy to heap burden on the rest. Their voices emerge only when their comforts are impacted as seen during fuel, gas shortages that affected them personally. How other people were living mattered only so long as they too stood in queues – the moment their comforts were provided, not too many bothered about others. It is the middle class that always feels the pinch many as a result of living beyond their means.

Therefore Sri Lanka needs to identify what is essential-non-essential for all first & prioritize at next levels.

The “austerity” that is prescribed by IMF/WB & its promoters is not the austerity that should be adopted.

Let us understand why – taking Europe as example. 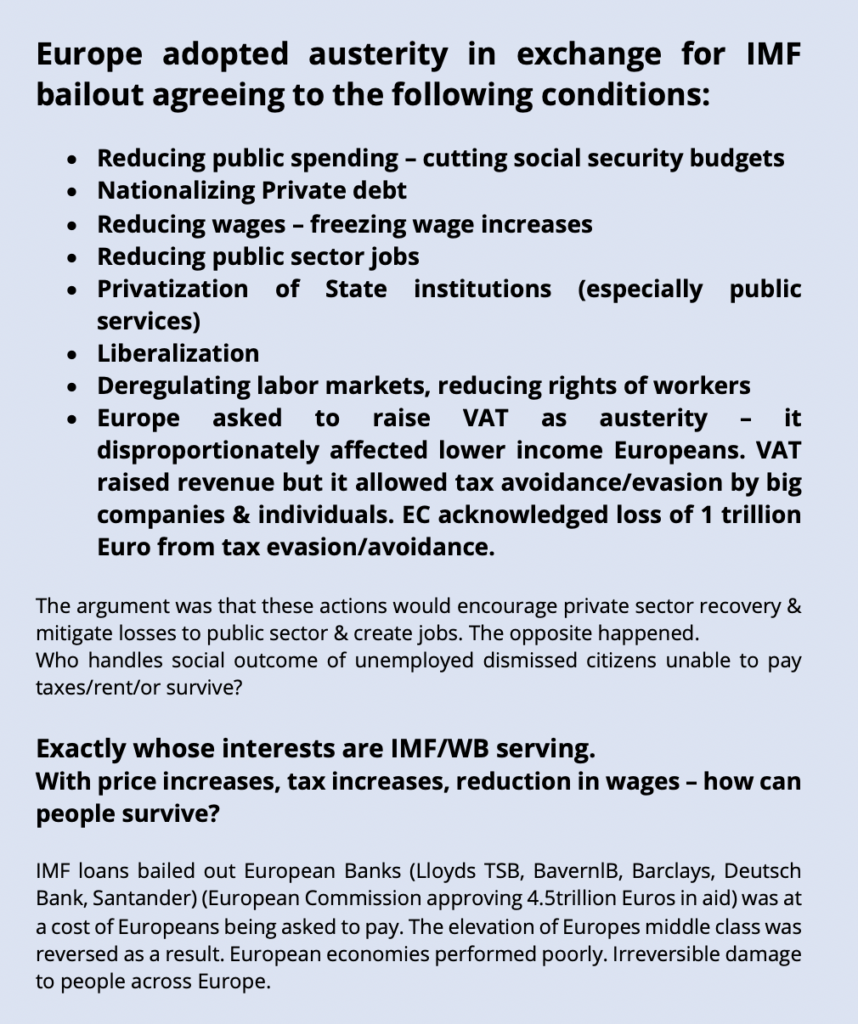 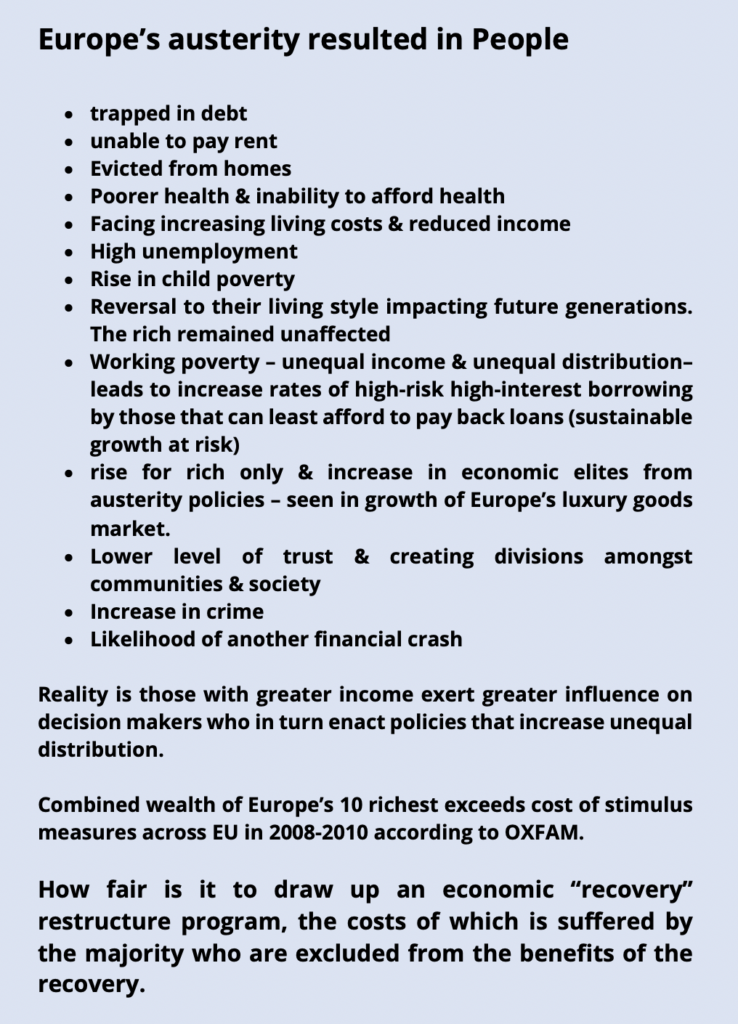 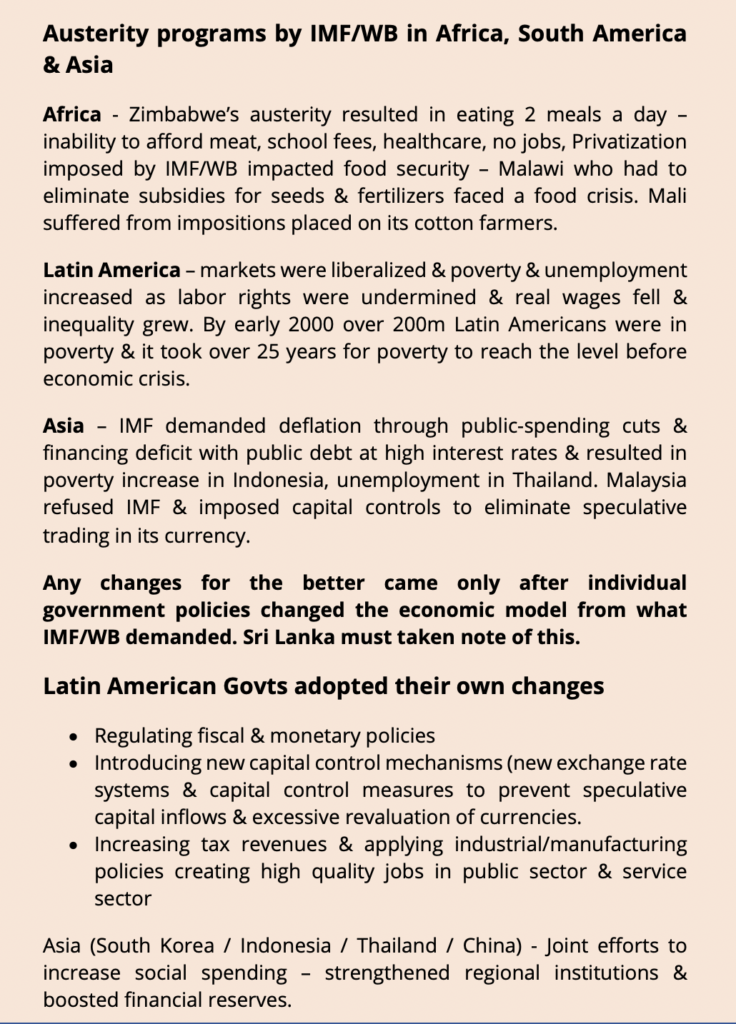 Countries taking loans & undergoing IMF/WB bailouts after default or bankruptcy have much in common which warrants Third World governments to demand flaws in international financial system be addressed for equitable development & growth.

Governments must stop agreeing to austerity measures but start questioning the likely outcome having studied other nations in similar situation & forecasting what is likely to happen to Sri Lanka!

This role is being completely ignored by Central Bank & decision makers.

When 15-25m Europeans are likely to end up in poverty by 2025 due to austerity measures, why is Sri Lanka’s leaders not concerned about our people? Tight fiscal austerity & tough labor reforms have failed in Europe & elsewhere & is going to land Sri Lanka in a bigger fix.

Economic policy cannot simply be taking loans, repay debt, & take more loans and agree to adopt extreme austerity that lands citizens in extreme poverty. This is where Sri Lanka is heading & not many seem to be reading the alarm bells.

The connotation of austerity & its mechanisms only serve a handful of rich while majority citizens end up poorer. Austerity measures cannot result in more people in poverty, no growth & no development while a handful distribute wealth amongst themselves with rest as servants.

IMF/WB austerity being rolled out has failed in Latin America, Africa, South East Asia & even Europe.

What should be happening is determining austerity for the rich & providing stimulus for the rest. This mechanism will reduce inequalities & start the engine of growth & development.

A nation’s economy declines when private sector demand-supply engine stops, when investors don’t invest, when consumers lose jobs & have no money to consume.

A government must intervene not to make the conditions worse but to provide a stimulus for the needy / give incentives to economic & social infrastructure that creates jobs to start engine. 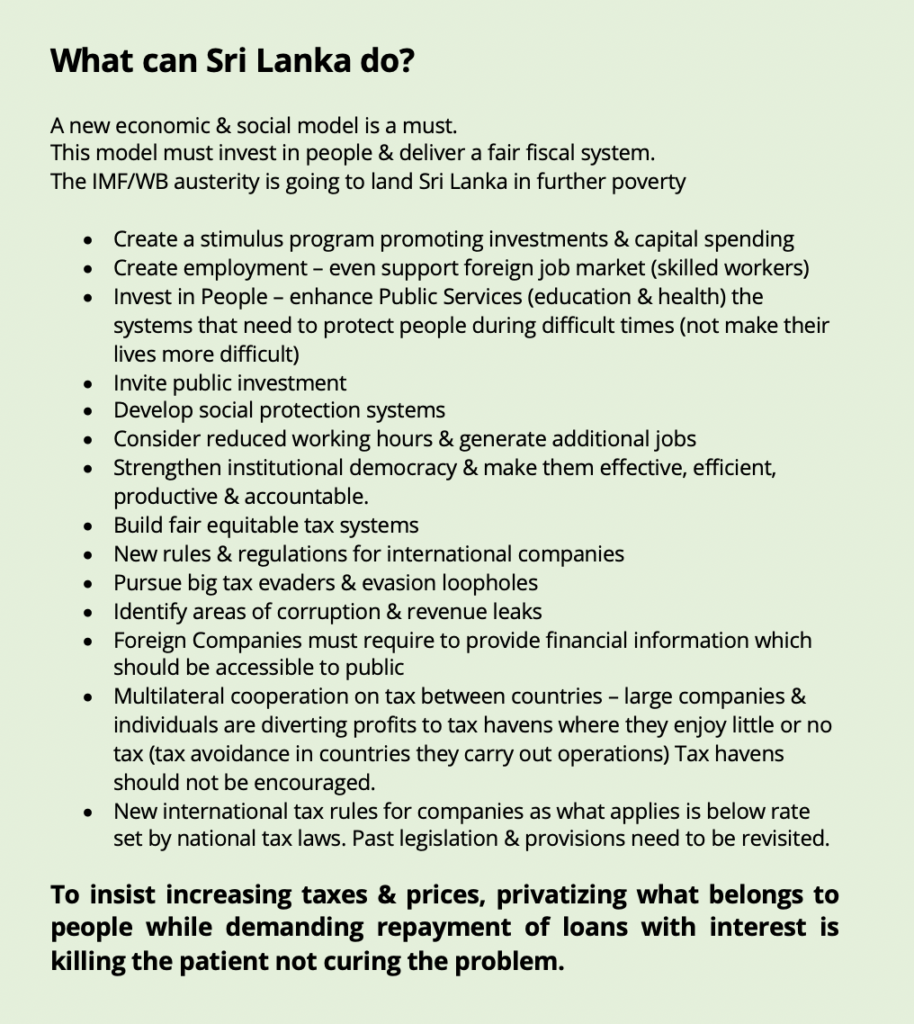 We must awake to reality.

Politicians & Officials have declared Sri Lanka as bankrupt. Our growth & development are at a standstill.

International agencies are demanding “austerity” – why is it always applicable for only the middle class & poor? – why do IMF/WB never recommend cuts for the rich & ultra rich?

A closer look at the austerity measures applied across continents & their outcome that reversed social gains, increased poverty & destroyed productivity is not the option for Sri Lanka.

Europe’s banking system was saved by a IMF bailout but at what cost to the ordinary Europeans? Their governments reduced spending on education, health & social services. These resulted in dismantling entities that reduced social inequality. Millions are virtually falling into poverty. Do we want this happening in Sri Lanka?

The solution to coming out of an economic crisis is investing in People & giving them Jobs. A Govt must serve interest of public at the minimum level. That is its first duty. A crisis shows imbalance of power & exposes dysfunctional systems as well as inefficiencies & ineffectiveness of people. This means all those who were part of the problem cannot continue to be part of the solution. It will never result in a solution. So if any hard decisions and actions have to be taken, it should be to first remove all those who contributed to the problem & not tax the people who end up footing the bill.

The austerity that seeks to reduce people into further poverty is no restructuring solution. Austerity must be for the rich & stimulus must be given to the Middle Class & Poor.