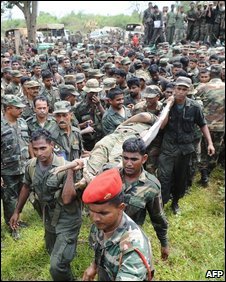 The Lessons Learnt & Reconciliation Commission in their November 2011 report gave some important numbers sourced from the Ministry of Defense. Poignant is the numbers of dead, injured and missing following the military intervention ordered by the President of Sri Lanka following LTTE’s closure of the Mavil Aru anicut denying water to thousands in East Sri Lanka in July 2006.

The military onslaught to defeat the LTTE eventually resulted in terminating the bogus 2002 ceasefire agreement bringing to naught and showcasing the futility of even foreign mediation and foreign monitoring missions operating in Sri Lanka since 2002 that could not prevent LTTE killing even Sri Lanka’s much loved Foreign Minister Lakshman Kadiragamar in his own residence.

The National Army was ordered by the country’s President to end LTTE militarily though more than 2 chances were given to the LTTE to lay down arms & surrender which was refused.

What is described as a non-international armed conflict, Sri Lanka was bound by customary international humanitarian law and Common Article 3 of the four Geneva Conventions.

The military operation that started off in July 2006 ended in May 2009. Terrorism that last 30 years was eventually ended in 3 years putting to rest over 300 suicide attacks by LTTE upon unarmed civilians across the island.

While certain countries chose to issue customary diplomatic statements every time LTTE committed heinous crimes, these very countries were quick to demand accountability for LTTE defeat. It was no surprise, LTTE’s ground force & leader was supported by LTTE living overseas who were raising funds and procuring the most sophisticated arms and weaponry for the LTTE.

What is poignant about the defeat of the LTTE and the LLRC which the GoSL conceded to adopt in view of the demands for accountability were figures listed under chapter Security Forces Casualties & LTTE Casualties (3.20)

So the most important question ten years after is have the remaining 10,435 been identified & named by their family members?

Is this figure of 10,435 being quoted by LTTE Diaspora or UN/UNHRC and NGOs as CIVILIAN DEAD?

There are entities regularly issuing names of LTTE dead claiming they surrendered to the armed forces in May 2009.

EU funded Sooka says 110 missing in 2015 referring to the missing from Wadduvakkal Bridge – this list are ALL LTTE combatants. So is she preparing reports on behalf of LTTE terrorists or Tamil Civilians?