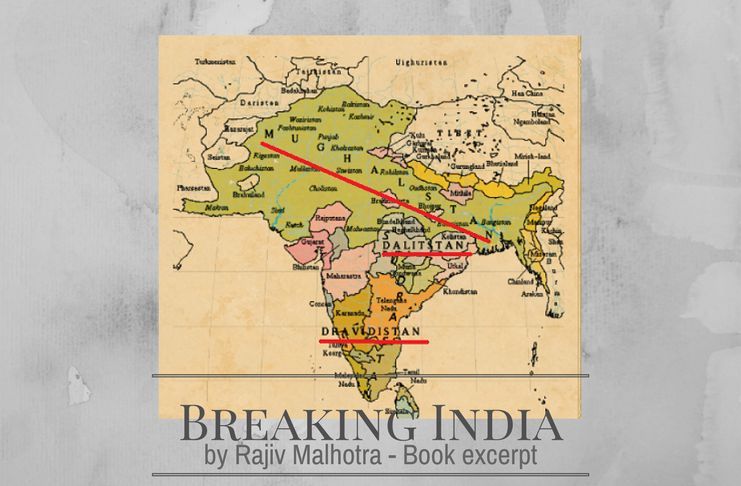 Indo-Sri Lanka relations have never been what either country would have liked it to be. What both countries should realize is that small as Sri Lanka may be, India cannot afford to bully it or destabilize it as India would have liked. The terrain is now far different than when India could call the shots in 1980s. There are bigger and far more powerful players that even India needs to weather with caution. There are many faux pas that India will not like to admit to, but what India must realize is that if it is in Sri Lanka’s best interest to ensure India remains unbalkanized, it is to India’s best interest that Sri Lanka remains without elements that covertly propose to do what was done to the Soviet Union & the former Yugoslavia.

Sri Lanka’s PM and former President is in India. The Indian PM has clearly stated Stability of Sri Lanka in India’s interests as well as Indian Ocean Region. Who is destabilizing Sri Lanka? India must answer for the elements that destabilize Sri Lanka will be the same elements that will destabilize India just as covertly as being done in Sri Lanka.

The Tamil card played by India is the very card being played by the West to strike its presence in Sri Lanka. The Tamils have played a historical role in being part of the West’s toolkit during colonial rule as indentured labor, mercenaries and sepoy army. Therefore, India must be mindful of overplaying this card as it also means balkanizing of India via Tamil Nadu. India take note – every demarche issued by India to Sri Lanka regarding minorities in Sri Lanka will be usurped by West for its destabilizing purposes which will eventually boomerang on India as well.

A good look at the West-government funded faith-based charities and ‘ngos’ would tell the story of what is planned for India in time to come. Now that the fox is posing as ‘friend’ and given access to India it is only a matter of time that plan for India will be put in place and already many Indians may be roped in for this bigger quest. The greater eelam for the West would probably be the alternative to Diego Garcia!

What Congressman Edolphus Towns said in 1998 is important and must be recalled throughout India’s interactions with the US. 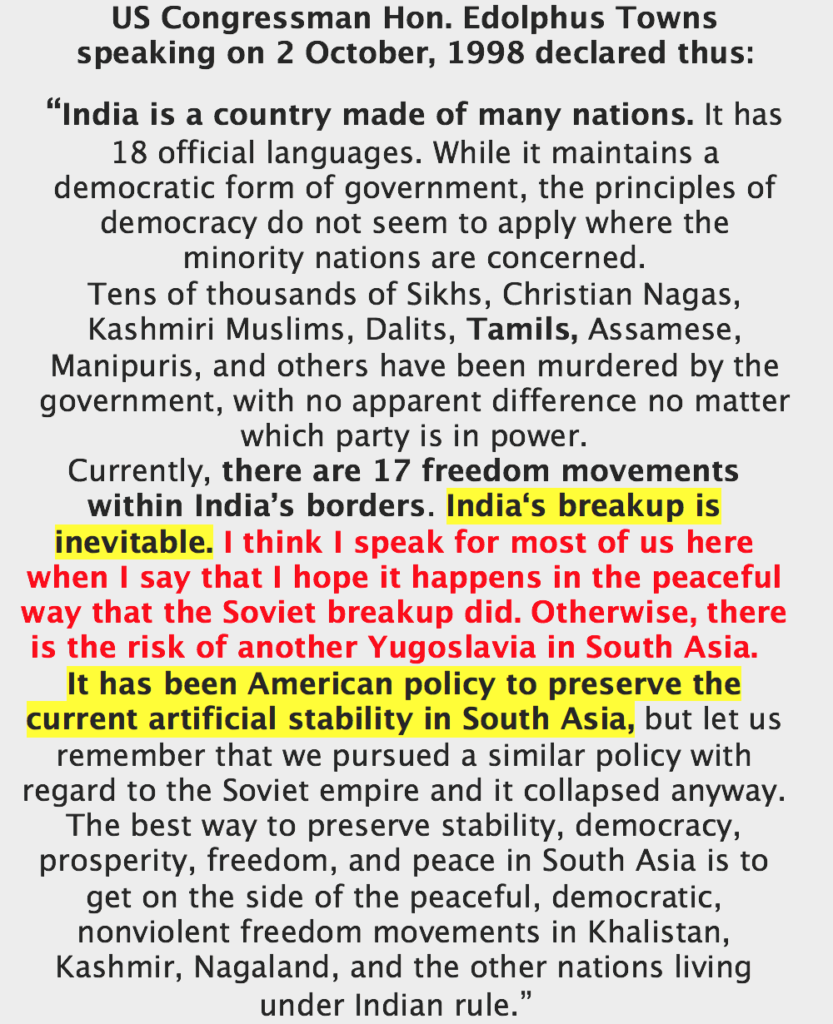 Has India thought about who its greater enemy is? Obviously India has been roped into taking an anti-China stand and is part of the US-Japan-Australia ‘quadrilateral consultation’ strategy in Asia Pacific. US has also redefined its US Pacific Command as Indo-US Pacific Command. US has roped in India for various counter terrorism drives too. What’s baffling is that it is an open secret that majority of Islamic terrorists are peddled by US and its Western stooges who are trained, armed and imported to wherever US eyes its presence or wishes to ground itself in on pretext of ‘war against terror’.

China’s B&R for global development of all partner nations or US pivot meaning neocolonial capitalism grabbing worlds resources and sharing amongst a few corporate elites should hardly leave a choice for India. If India thinks China is a bigger threat, India may well like to explain what happened to every country US is now militarily showing its presence in. The outbreak of coronavirus and its global outreach has resulted in questions of bioengineered depopulation drives which cannot be brushed aside as conspiracy theories. Russia too raised similar doubts – https://www.bbc.com/news/world-europe-51413870

All these will eventually have an impact on India and India has questioned western NGOs for various vaccination related deaths but the same entity in 2019 bestowed the Indian PM an award! Dishing out awards has been part and parcel of West’s policy to draw in Asian and Africans into their fold and sphere of influence.

The pro-Russia stand taken by India changed in 1982 following Indira Gandhi’s visit to US. It was round about the same time India-assisted Tamil militancy came into open guerilla tactics in Sri Lanka. However, Mrs. Gandhi was assassinated 2 years later and her politically novice son Rajiv took over. The first strategic dialogue between India & US was in June 2010 and India was called “an indispensable partner.” President Obama pandered to India’s aspiration to become a permanent member of the UNSC. In July 2011 as part of the US-India Strategic Dialogue a MOU was signed on cyber security cooperation. With US announcement of its pivot to Asia, US Defense Secretary was quick to land in India and announce military ties in 2012. Modi’s visit to US in 2014 and Obama’s 2nd visit to India in 2015 delivered the message “America can be India’s best partner.” Probably that made India to assist regime change in Sri Lanka in January 2015. Thus not surprisingly US elevated India to a major defense partner in 2016 with India now enjoying treaty benefits. PM Modi was again in US in 2017 and in 2018 Communications Compatibility and Security Agreement (COMCASA) was signed. According to Stockholm International Peace Research Institute, exports of American weapons to India from 2013 to 2017 increased 557% over the previous five-year period. American arms sales to India currently stand around $18 billion. No one can forget that all of the world’s tyrants were all bosom pals of US! These very friends eventually became foes of the US once US had strengthened ties and ironed the landscape well enough to depose their friend and take over. This is what India needs to be mindful of. Probably the Western think tanks know about India’s terrain far more than India by now! These tie-ups make any Asian state view its relations with India as being part of the US strategy in Asia and that is not healthy for India’s relations with these Asian neighbors or for India eventually.

While Sri Lanka has managed to avert the over-reaching pro-US following 2015 regime change, US influence in Nepal has been such that not only its constitution has been changed but Nepal is virtually trapped to signing the MCC which is part of the US project in Asia to counter China. It is to India’s best interest as well as Sri Lanka’s that MCC-SOFA-ACSA and US Peace Corps deals do not get passed in Sri Lanka. These agreements will be major chaos trigger points to Sri Lanka – India & rest of Asia with US troops grounded in Sri Lanka with US vessels, personnel & contractors given full portfolio of logistics services in Sri Lanka with 100% immunities.

In August 2017 President Trump declared U.S-India strategic partnership would also be a “critical part” of the South Asia strategy. US claims “the Indo-Pacific is the single most consequential region for America’s future.” Why? Asia is the world’s biggest continent – India & China are the two most populace countries, the world’s biggest Muslim population is in Indonesia, 7 of the 10 largest standing armies in the world are in Asia Pacific and 1/3 of global shipping passes through South China sea. Should India be part of US strategy to contain China’s rise at the cost of alienating itself from Asian neighbors but aligned to US traditional allies Japan, Philippines, Korea and Australia? In the quest to contain China will US not eventually consider India’s disintegration as well. Economic quest for supremacy also means bids to grab natural resources and there are no permanent friends but permanent interests in these decisions.

Congressman Edolphus Town’s 1998 statement is important because for US, it is China who US regards as threat and India is just a ploy to get closer to China. India’s decision to purchase S-400 air-defense missile systems from Russia inspite of America’s threat to sanction signals that India has decided to play a more independent role than Japan. India must continue to do what is right for India and its national security irrespective of its partnership with US.

As the Indian PM said the Stability of Sri Lanka is in India’s interests as well as Indian Ocean Region. The threats Sri Lanka faces presently will be the very threats that will be transferred to India. India must allow Sri Lanka room to take care of its internal national security threats and feel assured that Sri Lanka will never allow its turf to be compromised because Sri Lanka knows that same enemy will target India next.

India should determine who its bigger enemy is & decipher what India will eventually be in store for.