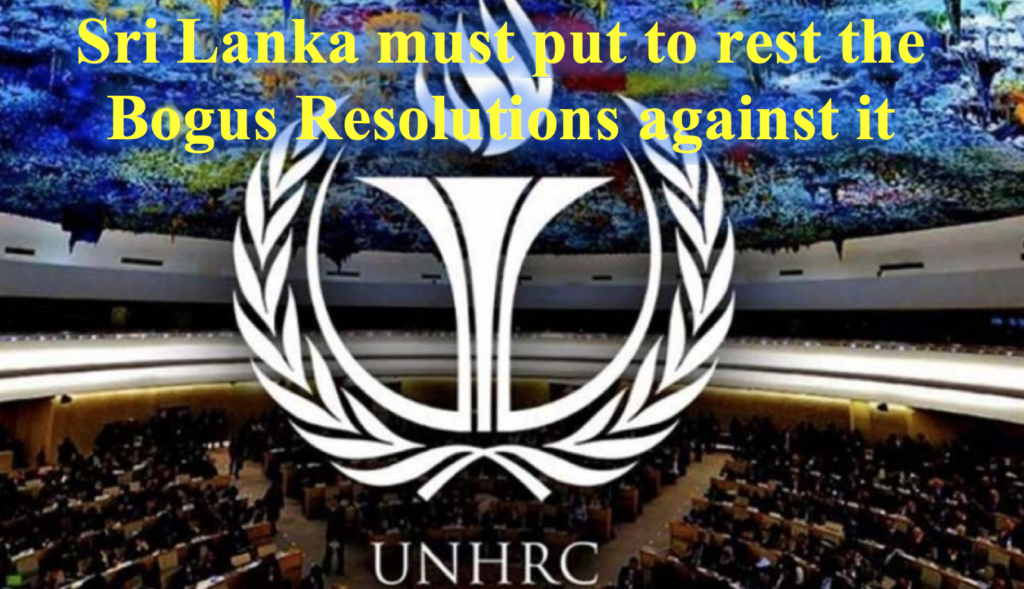 Backed by an overwhelming majority at the Presidential & General Elections, the Government in power rightly has decided to work towards a closure of the successive UNHRC Resolutions against Sri Lanka by initially withdrawing from the co-sponsorship of 30/1 & 34/1 Resolutions. UNHRC has every provision to take up human rights issues at the Universal Periodic Review. Four of Sri Lanka’s dearest friends are members of the UNHRC – China, Pakistan, Russia & Cuba and Sri Lanka must initiate their cooperation to bring all of the former legally questionable procedural error resolutions to a grand finale.

Sri Lanka must re-write the narrative and present a dossier to the UNHRC Membership of Sri Lanka during LTTE reign of terror and post-LTTE defeat. The decision to militarily defeat LTTE came after enduring 30 years of terror and failed peace talks, negotiations and even foreign-backed cease fires including foreign monitoring missions and foreign peace keepers. Sri Lanka was up against a terrorist movement banned by 32 countries which continue to maintain that ban even 10 years after LTTE defeat owing to the international illegal nexus that operates overseas. Sri Lanka must initiate action against the international LTTE fronts together with the diplomatic community. The world must know that all of LTTE’s victims included every ethnic denomination in Sri Lanka even foreigners.

Sri Lanka must showcase what LTTE denied their own during their defacto reign and what Sri Lanka afforded to the people in the areas where LTTE ruled with gun. No reconciliation is required to take place with terrorists, while Sri Lanka acknowledges how Tamils also suffered under LTTE. This must be highlighted to the world once more. The false claim of discrimination must be nullified by producing examples of how minorities are represented in both public and private polity & the positions they hold. Every fabrication that has gained momentum via bogus propaganda channels must be nullified with facts & figures. The manner that 3 successive UNHRC resolutions were artificially birthed must also be shown. A privately commission 3-member panel report made available to the UNSG became the foundation for successive resolutions quoted even by UNHRC head now parroting for the LTTE in her retirement. The Ban-Ki-Moon Report was never tabled in the UNSC, UNGA or UNHRC for Sri Lanka to officially respond. Instead intrusive allegations went for vote in a political witch hunt against a UN member state, going so far as to even suggest constitutional amendments and annulling of even penal codes. That Sri Lanka brought peace, eliminating terror to the 21million people were ignored and those voting against Sri Lanka had no explanation for why they could not stop LTTE terror killings though questioning how LTTE were killed. The dossier of questions that those alleging needs to be prepared and endorsed by our friends in UNHRC together with the closure resolution. Sri Lanka has been unfairly treated in the manner the UNHRC has been used by lobby groups as a result of the power of international funding & lobbying.

Today, these countries are facing their nemesis.

Sri Lanka has backing of 33 non-aligned member nations against a handful of Commonwealth member states of which UK heads. It is also a good time with UK now isolated as a result of Brexit for Sri Lanka to even consider leaving the Commonwealth as Sri Lanka has had no support other than sipping tea inspite of being a member.

Voting Once Against Sri Lanka

Once voting for Sri Lanka

Sri Lanka’s diplomats have their work cut out for them.

Sri Lanka cannot forget the nations that defend Sri Lanka on international forums. That amity must always prevail. At the same time, Sri Lanka must also canvass among the other nations who may have a wrong notion of the conflict in Sri Lanka & correct the narrative using the best of diplomatic channels available.