Sri Lanka’s Water should NOT be privatized

It is predicted that by 2025, over 5billion of the worlds population will not be able to access fresh drinking water. The population has hit 8billion already. 2025 is just 3 years away. Water is the oil of the future. Governments must realize that the flurry to privatize “water” is nothing but a devious means for multinational private companies to grab ownership of the water & place a price for its distribution. It has nothing to do with better management of water. Rather the water is going to be managed at a price that people will not be able to afford. Therefore, governments & policy makers must be cautious about what they privatize and ensure utilities remain under national ownership.

It is true that governments have failed to protect existing national supply chains, distributions, growth & production and have been easily swayed to hand over state assets & resources to the private sector instead of enforcing the public sector to better manage these resources. Is there a catch to this, is this hand over having some corrupt inclinations attached? Is this not why politicians are alleged to be “corrupt” – politicians end up being corrupt, because the system makes them corrupt. Politicians become corrupt when the “other parties” for their gains and profits do deals that are defined as corrupt. Their role hardly gets scrutinized & all blame falls on the politicians. It does take two to tango.

Politicians of nation-state systems need to act responsibly. If as predicted by World Bank, the water resources are dwindling, a Government has a duty to ensure water is managed & shared equitably amongst all citizens. It cannot be decided by price and who can afford, who cannot & to deny all those who cannot. This will lead to major fundamental human right violations. Thus, the water security of a nation is beholden on the decisions of politicians and they cannot sacrifice the needs of the people for corporate boardroom deals advantageous to them.

Every drop of water in the hands of the private sector implies disappearance of sustainable solutions to global water crisis. In reality, the world will land in a water crisis if water falls into private ownership. This is the reality that the governments of the world & Sri Lanka’s government has to understand.

If water is scare, a government will try to somehow ensure all the populace get water. The same will not happen if water falls into private hands. Everything will be pegged at a price and only those able to afford will be privy to water. What happens to the rest is of no concern to the private sector. What happens to the rest becomes a government problem, to which the government has no solution because it has forfeited a resource that should have been kept under its wing.

All of the utilities that have fallen into private hands have resorted to rate hikes justifying better service but in reality aligned to their goals to make profits for their shareholders. A few “corporate responsibility” programs here and there camouflages their ulterior motives.

Utilities under private ownership becomes a marketable commodity. Every new service comes at a price. Non-payment results in no empathy but immediate cut of one’s supply until payment is made & that too with a fine.

Do we want water to become a marketable commodity or should it remain a basic human right/need? Water is a natural resource, gifted freely by planet earth. No one has a right to own it & place a price on it. Governments are custodian of a nations resources and assets to equitably distribute and share these resources, not to dish them out to private parties.

People cannot live without water – it is not even an option. Water is not a luxury item that people can learn to live without – people need water, it is an essential item. Essential items should always remain under national interest.

Corporate agendas are always driven and motivated by profits. Profits take priority to doing any good to the public. Privatization has always resulted in compromising environmental standards. What suits them is what matters over what suits the environment. Environment ends up having adjust itself to corporate ventures.

In the US, the multinational water companies, lobby US Congress as well as Environmental agencies to ensure they do not make policy decisions impacting their service. These lobbies happen all over the world but are done discretely and secretly. But these end up deciding government outcomes and blames fall on politicians though the tactics of lobbyists are often swept under the carpet.

Companies that realize the threat of water becoming scarce, are clamouring to own it, for it will serve dual purpose – they will have ownership of a dwindling resource while also being able to make major profits by putting price tags on its distribution.

Governments that have been shortsighted and fallen prey have given up water resources to private companies for 20-30 years – giving monopoly of water supply to companies. Companies are not bothered if people protest demanding water or protest that the price of water is unaffordable. Unauthorized parties cannot enter a private premise and all protestors who attempt to do so will be handled legally & end up behind bars. Companies will not be bothered that people do not have water or cannot afford water. This is what people who are promoting privatization need to understand.

Look at the nature of how water deals from government to corporate hands are taking place. Are these transparent, are the private parties accountable. Why should they be secretly lobbying ministers? Why is the bidding process often kept hidden from public scrutiny? Why are contracts worked out behind closed doors? Why are details of the contract kept secret from public since they are directly affected by the conditions being written out in the contract? Why is no one highlighting these forms of “bribery”.

It is natural that when majority of communication, Media & PR channels rest in private control and think tanks and NGOs are all private owned the frenzy to privatize is promoted. These entities are masters at playing with people’s emotions to get their way. They ensure empirical evidence and data are shunned for people to see whether privatization should be an option. They build up some form of fairytale scenario that privatization is the only option while presenting government sector as corrupt and unproductive.

If water is privatized, there is no assurance that the private entity be it domestic, foreign or multinational will work in the interest of the community. Their priority will be to their bottom line and profits to their shareholders. They are not accountable to the citizens.

In the UK, the people are demanding that the government take back what they had privatized. When a government privatized a state resource/asset buying it back is not easy & it is costly. Withdrawing from the agreement will be deemed a breach of contract & costly. 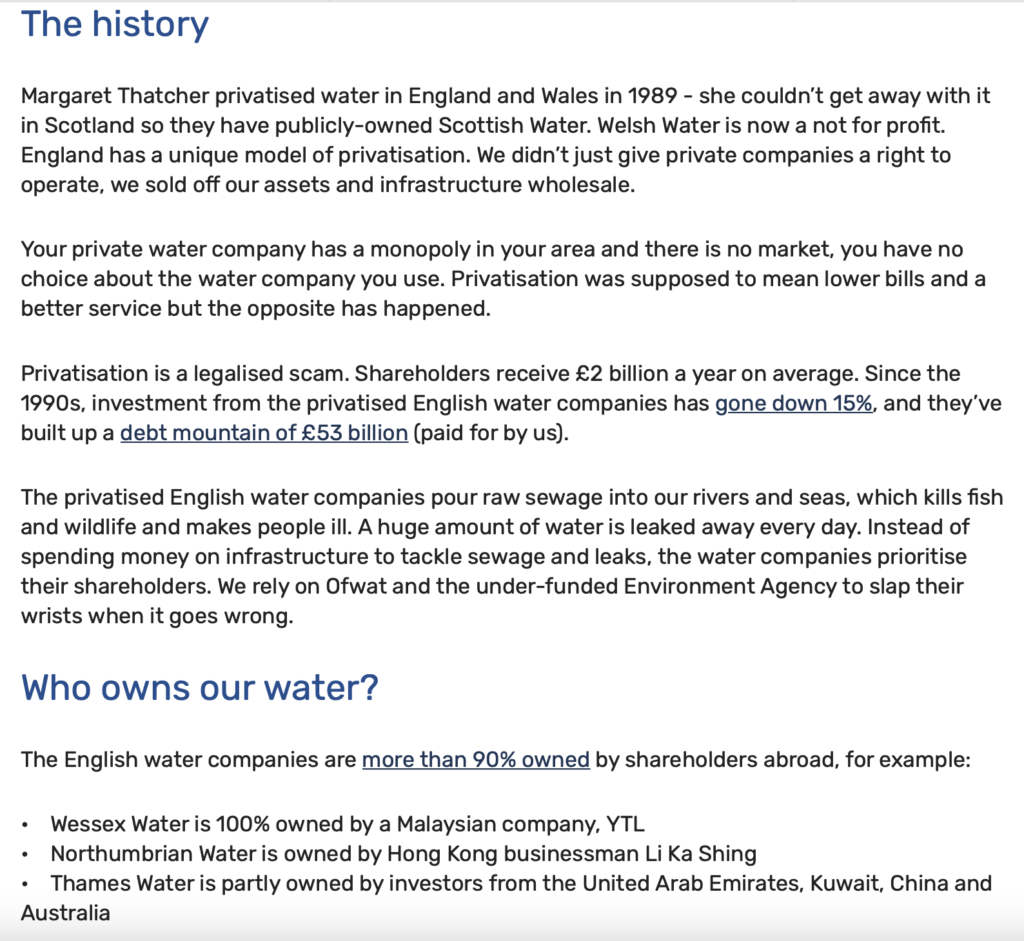 Another false notion being circulating by vested parties is that privatizing water shifts the financial burden from public to the private sector, implying that the taxpayers money is saved because costs of repairing, upgrading, maintenance and infrastructure etc will fall on the private owner. The reality is the opposite.

Every cost the private sector bears in providing water to the consumers will add all these costs into the monthly bill. Tax-free public financing translated into lower-cost projects whereas taxable private financing leads to higher interest rates.

With 8billion people, the question of employment also surfaces especially in the age of digitalization. When a state resource falls into private hands the immediate outcome is massive layoffs – as companies wish to minimize costs & increase profits. What 3 persons have done will be given to 1 person to do with a marginal increase.

Today multinational corporations are taking governments to court & even winning cases. The mistakes of politicians and attempts to reverse them ends up a costly affair for the taxpayers. Which is why governments should not fall prey to media hype to privatize and look at the data & statistics and see how best utilizes can be managed as a public sector intiative rather than a private one.

World Bank & IMF privatization schemes do not provide relief to poverty-stricken developing nations. In reality they help reduce access to water for the poor by their conditions to privatize utilities. These structural adjustment programs force governments to privatize resources of the state in lieu for loans which have to be paid back in dollar interests. The World Bank & IMF when placing conditions on already vulnerable and impoverished nations are not doing any good to the people by these actions. Refusing their conditions would mean a default on their debts so in reality World Bank & IMF are lobbies of the private sector placing conditions on governments to privatize if they wish to obtain loans.

The ultimate aim of these conditions is to export water. Corporations are helped to grab ownership of water, they determine the price, they don’t care who can afford or who cannot, their next move would be to venture into bulk water export – transporting to water-scarce countries at a price.

In 1943 when famine swept across India, the middle classes were oblivious to the sufferings of the poor. This is an important lesson even in the 21st century & questions how far the citizens are aware of each other’s problems! A famine is not only after a supply running out but it also implies prices rising beyond the reach of the neediest. India’s current water crisis is not due to shortage but misallocation & mispricing. These are lessons for Sri Lanka. Chennai imports water while India is the world’s biggest exporter of water. Did this make any sense?

How can a country lack water but export water?

The manner the environment is being drilled to build condominiums, massive structures, the manner the soil is being extracted and replaced with concrete can and will have disastrous consequences. Water is being extracted from its natural sources inhumanely and these will create ecological imbalance & destruction. Mother Nature is unforgiving and ruthless as we have seen in all of the natural disasters that have crossed our way. Over-extraction for profit is causing immeasurable ecological, environmental & socio-economic damage. Humans & their greed can and should never forget, once these natural and free resources are polluted or unfairly extracted it is almost impossible to restore or return them to their former natural self.