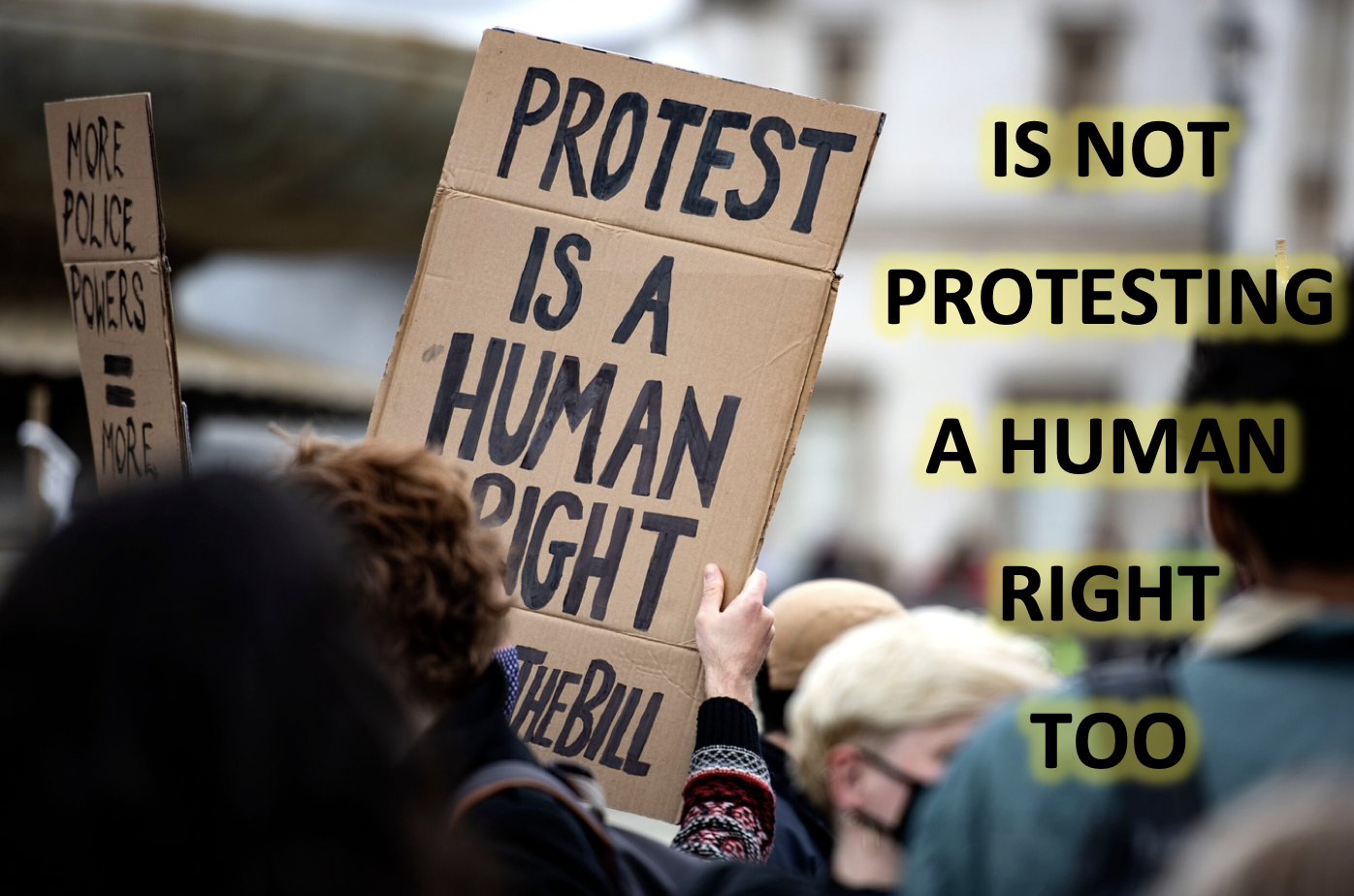 Let’s not forget that any protest/demonstration/march is taking place on public space, which means this space is meant not only for the protesting individuals/groups but others as well. Therefore, the law that one’s human rights cannot overstep the human rights of another remains valid & applicable. This is where police are brought in to ensure the protestors do not exceed their rights but also displaying tolerance towards peaceful protestors.

Protest/demonstrate/march in a public space

What laws protect the right to protest in Sri Lanka?

What laws protect the rights of the protestor in Sri Lanka?

What is a peaceful protest?

Who is a peaceful protestor?

Are there restrictions to hold a peaceful protest?

Ex: a protest or assembly during a plague that may cause a national public health risk

Govt & Police must outline at which instances even peaceful protests can be restricted & what are the restrictions the govt can impose (ex: limiting the number of protestors/protests to gather – distance to be followed – areas permitted etc)

What constitutes a violent protest?

What constitutes a violent protestor?

As protestors occupy public space there has to be a statute of limitation to their protests – protestors cannot occupy public places indefinitely. This essentially constitutes trespassing & illegal occupation.

Limitations to protests must be outlined in legislation.

What is the ‘restraint’ that law enforcement must abide during a peaceful protest?

What actions can the law enforcements take when peaceful protests become violent?

These must be clearly defined and publicly made aware of.

Clear definitions must be made.

It must be added that anyone who is a public figure and as such enjoying tax payers money have to accept peaceful protests against them.

What are the actions that can be legally taken against those that commit public disorder, serious damage to property & life of the community or even intimidation of people.

GoSL must have these clearly outlined in an existing Act amended or a new Public Order Act giving limitations, restrictions, duration and even amount of people allowed to participate by defining the protests/demonstrations and marches.

It is very important that the definitions are clearly legislated and communicated and not only the people but the police are also well aware of the powers they yield and the restrictions with which they too much function.

Any protest must take place with permission – written permission must be granted only after it meets the conditions that have been defined.

(written request – requirement for advance notice – date/time – contact details of those in charge) with the approval – a list of dos and donts must be given to the organizers so they are aware of the limitations to their protests and the consequences if they violate.

This has to be conveyed to the police who are aware of the category of protest under which permission has been given and the restrictions with which the protest is bound by. This makes it easy for the police to know what are acceptable and not-acceptable and what actions the police can and cannot take.

If protests & protestors violate the conditions with which they have been allowed to protest, there has to be appropriate actions against them legislatively made clear. We cannot have a situation where lawyers run to courts to provide free legal advice and clap at protestors who have caused harm or damage to public property.

With a powerful Public Order Act in place, with clear definitions for rights and restrictions, punitive actions etc – people not only will have a right to protest, non-protestors will not be inconvenienced while public spaces will not be occupied indefinitely.

It is because protestors and police do not know their rights, do not know what defines a protest and what are the limitations & restrictions applicable to all, unnecessary strife and animosities arise.

Therefore, the Govt without wasting time on bringing constitutional amendments must take up topics that are timely and that has led to a lot of misunderstandings, misrepresenations and misfortunes and bring legislation or amend existing legislation & communicate to the general public, the law enforcements & the legal fraternity who appear to be more confused than everyone else.