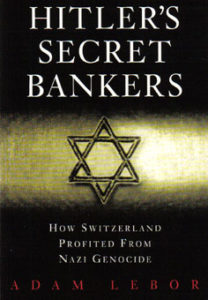 The Swiss profited from Nazism; banking gold stolen by occupied nations and holocaust victims. When Hitler began his reign of terror the first thing the Swiss did was to pass laws to guarantee anonymity to anyone transferring their savings to a Swiss bank. Was it a plan devised between Hitler and the Swiss, we may never know but Jews sent their wealth before many ended up ‘missing for ever’ in the torture chambers! The Jews that remained and wanted to regain their assets were refused entry by the Swiss. Their heirs who claimed the deposits in Swiss accounts were slapped with the law of confidentiality & payment was blocked with some Swiss banks demanding death certificates for those who perished in concentration death camps! Such was the ‘neutral’ behavior of the Swiss Govt.

Switzerland is renowned for being the financial refuge for stolen wealth which are protected by bank secrecy laws!

The Tax Justice Network produces a Financial Secrecy Index, ranking countries for the assistance their legal systems provide, to money-launderers, and to all people who seek to protect corruptly-obtained wealth. The higher the score, the more corrupt the government is. The last time this Index was published, in 2015, Switzerland was rated the world’s most-corrupt country, and Hong Kong was then #2.

“the Swiss will exchange information with rich countries if they have to, but will continue offering citizens of poorer countries the opportunity to evade their taxpaying responsibilities. These factors, along with ongoing aggressive pursuit of financial sector whistleblowers (resorting at times to what appear to be non-legal methods) are ongoing reminders of why Switzerland remains the most important secrecy jurisdiction in the world today.”

For over 70 years Swiss has been holding wealth not belonging to it. It is alleged that Swiss records cover only 10% of deposit accounts with the bankers claiming records got destroyed during normal course of business.

In May 7, 1997, a report on the gold trade between the neutral states and Nazi Germany was published.

The Role of Swiss Financial Institutions in the Plunder of European Jewry https://www.pbs.org/wgbh/pages/frontline/shows/nazis/readings/sinister.html

The Swiss National Bank publicly acknowledged it made profits on war time dealings in gold bullion with German Central Bank to the tune of 20million Swiss Francs.

”Even if Germany did steal gold from the countries it occupied and transferred it to the Swiss central bank, there is nothing to indicate that gold from concentration camps was among this,”

Jewish groups are demanding Swiss banks return the billions of dollars of unclaimed assets belonging to Holocaust victims, many who had put their money in Swiss banks before the persecution.

Ferdinand and Imelda Marcos flew into exile in 1986 after rigging too many elections throughout 21 year rule and having both army & people turn against him. According to UK Guardian they went into exile carrying 23 wooden crates, 12 suitcases and bags, various boxes that contained clothes to fill 67 racks; 413 pieces of jewellery including 70 pairs of jewel-studded cufflinks; an ivory statue of the infant Jesus with a silver mantle and a diamond necklace; 24 gold bricks, inscribed “To my husband on our 24th anniversary”; and more than 27m Philippine pesos in freshly-printed notes. The total value was $15m. The Philippine Supreme Court, claims the Marcos’s had accumulated up to $10bn while in office.

The Marcos’s on 20 March 1968 used false names to deposit $950,000 in four accounts with Credit Suisse, Marcos as William Saunders (he practised his new signature on the headed paper), Imelda Marcos as Jane Ryan. By February 1970, the Swiss accounts were so loaded, the couple added an extra layer of concealment, transferring their ownership to foundations registered in Liechtenstein.

The Swiss is famous for cheese and chocolates but Swiss are also notorious for banking looted money and protecting that too.