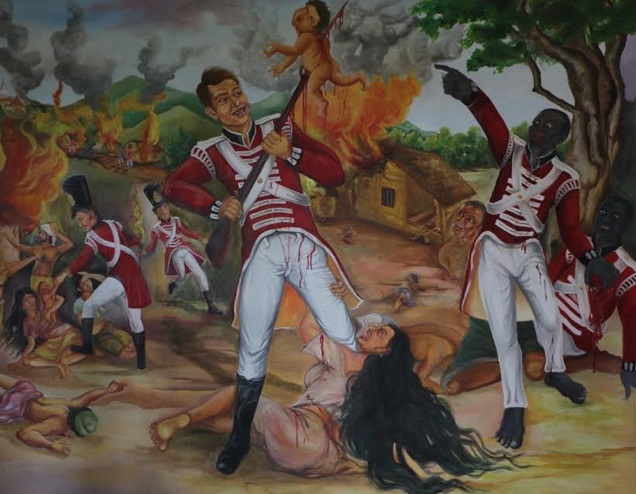 In an obvious show of crass diplomatic bullying after calling UNHRC a cesspit of bias & exiting the UNHRC, US has handed the baton to UK and an appeasing & spineless Sri Lankan Government is about to co-sponsor another betrayal of a hard won peace. These are the very countries that have yet to atone for their colonial crimes that include murder, plunder & divide & rule policies a result of which countries suffer endless conflicts as a result of racial profiling people, artificial boundaries, transporting indentured labor & forcing countries to accept them as citizens. UNHRC has shown itself to be a puppet for global power houses using UN systems & UN officials to bully smaller nations into subservience.

The UNHRC was established by the UN General Assembly on March 15, 2006. All the below crimes took place after the establishment of the UNHRC & during the ceasefire agreement between LTTE & PM Ranil until CFA was abrogated on 2008.

The examples given below cover April 2006-November 2008 shows LTTE attacking civilians. The question is what has UNHRC and all the countries rallying at UNHRC drafting resolutions done to stop LTTE from committing acts of terror on real civilians.

Whatever anyone says, LTTE did have a Civilian Armed Force, trained in armed combat. No one has yet been able to even provide estimated numbers of how many among the close to 300,000 Tamils that the Sri Lankan Forces brought to safety were LTTE cadres in civilian clothing, Tamil Civilian Force members, Tamils who engaged in hostilities at one time or another. In such a scenario how can all blame be credited to only the armed forces of Sri Lanka. The 12,000 LTTE combatants that surrendered were all in civilian clothing – and none of them ended up dead. 594 of these surrendered combatants were children and given a special presidential pardon, educated, returned to families and helped with livelihoods.

The allegations of genocide & mass murder is so ridiculous for even in the 2012 census there was no reduction in Tamil population to form even a basis for such an argument. Where have you heard of Tamils getting killed but their population increasing? 3 days after the military defeat of the LTTE, the UN Secretary General landed and flew by helicopter over the war zone. At no time did he or any of the others travelling make any statement of seeing newly dug graves to put the supposed to have been killed 40,000 people… and for anyone to kill this number and dig graves & stuff them inside takes quite a bit of time. So where are the skeletons to establish proof? That too is part of the fairytale that was spun as a means of forcing the GOSL to agree to change the constitution, change penal codes, privatize lands, allow foreigners to set up show and a plethora of other neoliberal policies now being rolled out using the UNHRC as a means of scaring the GOSL into silence & appeasement.

The battleground has got further aggravated by a set of busybody NGOs and their heads who are 24×7 manufacturing reports using runaway combatants who are trained to shed crocodile tears about being tortured and when they were holding forte in North they probably gave chocolates and roses to Sri Lankan soldiers!!! What a load of crap we are being fed. LTTE was no innocent party and the soldier has every right to defend himself.

The International Terrorism experts headed by late Sir Desmond de Silva clearly confirmed that the SL troops did not commit war crimes. The praises by the ICRC, the consultative committee minutes and meetings where all envoys took part throughout the conflict was ample grounds for any envoys to place issues on the table & demand answers. None of them brought any alarming news.

What of this UNHRC Resolutions – all based on a report that was personally commissioned by the UNSC on the last 3 months of the conflict… and with time it has expanded its scope completely ignoring that this report was LEAKED into public domain and a LEAKED REPORT CANNOT be the basis for 3 resolutions against a UN member state. The GOSL must get its diplomats not to meekly read out speeches but to demand the legality of the Ban Ki Moon report. It has no mandate of the UNSC or UNGA. Ban Ki Moon report was not even tabled in the UNHRC for Sri Lanka to respond. On top of that the UN set about to do another cunning trick by getting the PETRIE report ALSO LEAKED to public shedding crocodile tears that UN is to blame for not stopping the carnage. What about the carnage by LTTE over 30 years? Don’t the civilians matter to the UN more than the LTTE???

With LTTE fronts & their leaders inside UNHRC mingling with UN officials we are not surprised at the scale of bias that goes on inside the UN. There is enough evidence of UN corruptions and biases seen in many a report now coming out against the UN.

Moreover, using UNSC Resolution 1373 the GOSL in April 2014 named LTTE fronts providing material support from the very countries that are voting against Sri Lanka at the UNHRC should we be surprised that LTTE fronts operating from these countries were never properly investigate for materially supporting LTTE from foreign countries?

India extends ban on LTTE by another 2years

EU formally bans LTTE of which Germany is also party

LTTE suicide attack on Navy bus parked at transit point in Habarana kills 101 UNARMED SAILORS returning home. It is forbidden to kill unarmed soldiers many of these were injured.

4 farmers killed by LTTE in Ampara

LTTE explodes passenger bus at Okkampitiya, Buttala killing 27 civilians and injuring over 70 others

LTTE explodes bus travelling to Janakpura killing 8 civilians. 4 soldiers also killed. If SLArmy is being questioned for returning fire at LTTE who were shooting from among civilians & claiming that to be a violation, why did UNHRC remain silent over these killings?

Dehiwela train bomb kills 9 civilians and injures over 80 others

India extends ban on LTTE by another 2 years

What is the GOSL getting out of subjecting Sri Lanka’s National Army to such ridicule? Did the Armed Forces not fight a fair battle, moreover let us not forget these are terrorists we are dealing with, they are not signatories of any Treaties or Conventions, however given that the laws of war apply to them then the LTTE’s crimes cannot be ignored or brushed under the carpet & the Armed Forces who were ordered by the countries leader to rid the country of terror be punished for their national service.

We will never agree to any Retributive justice for the Sri Lankan Armed Forces and Restorative Justice for LTTE. Prabakaran & his key leaders maybe dead but they waged 3 decades of terror NOT ALONE – many others who were directly & indirectly part of this terror operation are very much alive and include not just Tamils, but Sinhalese, Muslims, foreign envoys, foreign govts, people & organizations functioning from overseas, NGOs/INGOs and even the UN & its system.

GOSL a major faux pas was created by co-sponsoring the UNHRC resolution in September 2015..do not repeat that mistake by sponsoring another this time by a country that has blood on its hands for colonial sins.