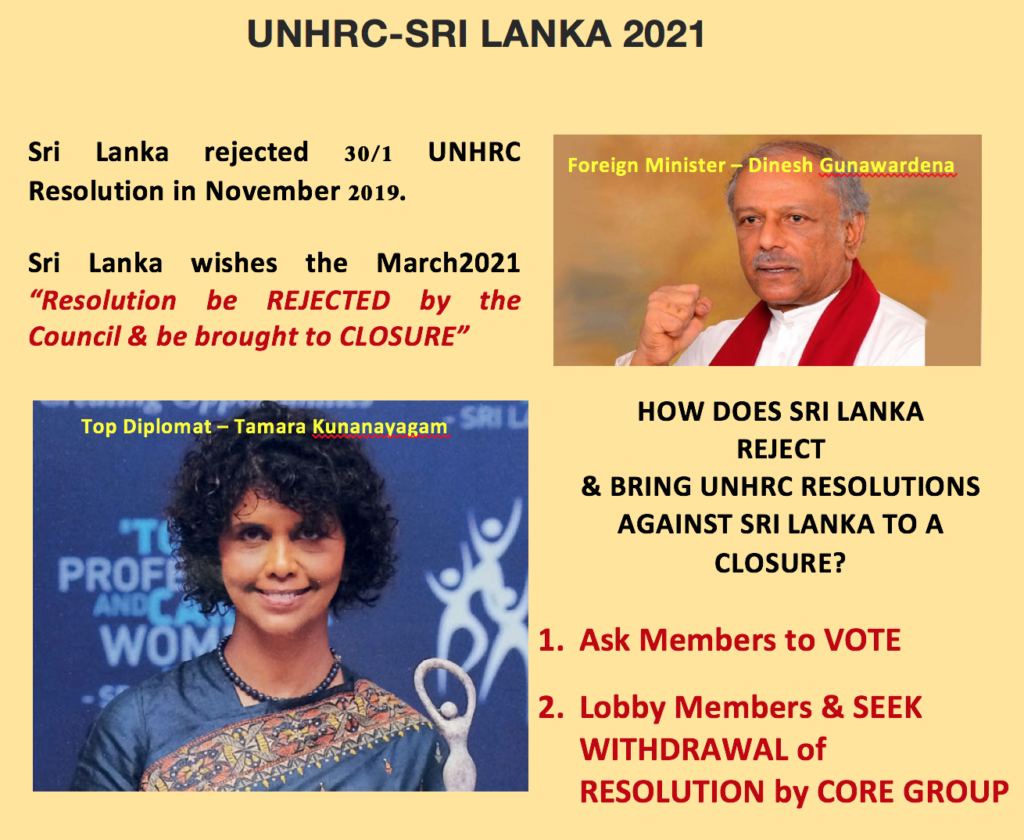 Sri Lanka’s Foreign Minister has expressed what the Sri Lankan public wish to hear. We want the Government to take a firm stand and strategize on how to put to rest this unfair, biased witch hunt against Sri Lanka. A conflict that lasted 3 decades was ended not by UN or UNHRC but by Sri Lanka. UN or UNHRC did not stop LTTE, could not stop LTTE and did not save a single child from being turned into child soldier killers. Not only that the UN or UNHRC could not stop war crimes against ANIMALS by LTTE. It is laughable how countries with blood stained hands are writing resolutions against Sri Lanka and demanding accountability while they refuse to be accountable for their sins both colonial and modern. The Sri Lankan public must understand the dangers at hand and why we must pressurize the GoSL through its foreign ministry to either seek a vote or lobby members to force the core group to withdraw their resolution.

UNHRC is interfering into the domestic affairs of Sri Lanka with each resolution.

This will politically socially and economically impact Sri Lanka as it will impede our sovereignty.

Why Sri Lanka must go for a vote?

In simply sitting silent while the Core Group reads out its bogus charges and not asking countries whether they agree or not,  Sri Lanka is silently accepting every lie and trumped up charges.

In not raising objection, Sri Lanka will be allowing UNHRC to continue with more detrimental demands that will interfere into the legal mechanisms of Sri Lanka, leaving no room for the national laws to prevail.

In simply surrendering, we will be allowing foreign intervention via R2P  (armed humanitarian intervention) and eventually end up remote controlled by Geneva. It’s a modern version of Colonial Governor in the form of Bachelet ruling Sri Lanka.

All that UNHRC will say is – ‘we did in Sri Lanka, your country is next’.

Countries that nitpick on Sri Lanka for human rights, claiming we cannot look after our own are cannot even look after their covid patients and are holding world records for covid deaths1

If Sri Lanka doesn’t go for a vote, Bachelet will invoke individual unilateral sanctions because she cannot use her office to impose sanctions.  Only UNSC can impose sanctions and that too if a nation poses an international threat to peace. UNSC has never sanctions countries for human rights!

If Sri Lanka doesn’t go for a vote, it’s as good as admitting to the lies being told by even the UNHRC head. For her to read out a report and says ‘more than 250,000 people were detained for months in military-run closed camps’ is unacceptable and the GoSL must demand she retract &  apologize for this. This is going overboard with lies.

We have been repeatedly saying that if there were individual excesses committed by soldiers not adhering to command or not following rules of war, then bring these individual instances with evidence and separately charge them if found guilty beyond doubt. But the brush stroke allegations of the nature that the UNHRC head is putting into her report is going overboard with bias. It is because of these lies that we must defend our troops and our nation.

If Sri Lanka, remains silent and allows the UNHRC heads’ biased report to go without admonition then we are again walking into another external intervention of what took place in 1987 with India threatening Sri Lanka, dropping parippu over Sri Lanka and forcing the signing of the Indo-Lanka Accord and landing Indian Peace Keepers that killed Sinhalese, Muslims and Tamils and even raped 3000 Tamil women. Do we want a repeat of this? NO

But what is important to realize is that India intervened unilaterally, today we are facing QUAD nations & their allies who wish to use Sri Lanka’s airports and ports as military installations and use our land for international trade and holiday hub for their staff and families – look at the number of foreign resorts, foreign apartments emerging across Sri Lanka and the manner they are creating no-go zones securing the area for themselves!

Therefore, the 2015 co-sponsorship of 30/1 resolution paved the way for much damage. The best way to get rid of the defenders of the nation is to put them in jail on trumped up charges, this is what the UNHRC is tasked to do via the international tribunal with international judges and international lawyers to find our war heroes guilty and put them out of the way, while they descend and rule Sri Lanka.

Sri Lanka must now be alert, as the UNHRC has come to the last leg of its outsourced plan by the QUAD and allies. Sri Lanka and Sri Lankans must unite to save its sovereignty and its nation. 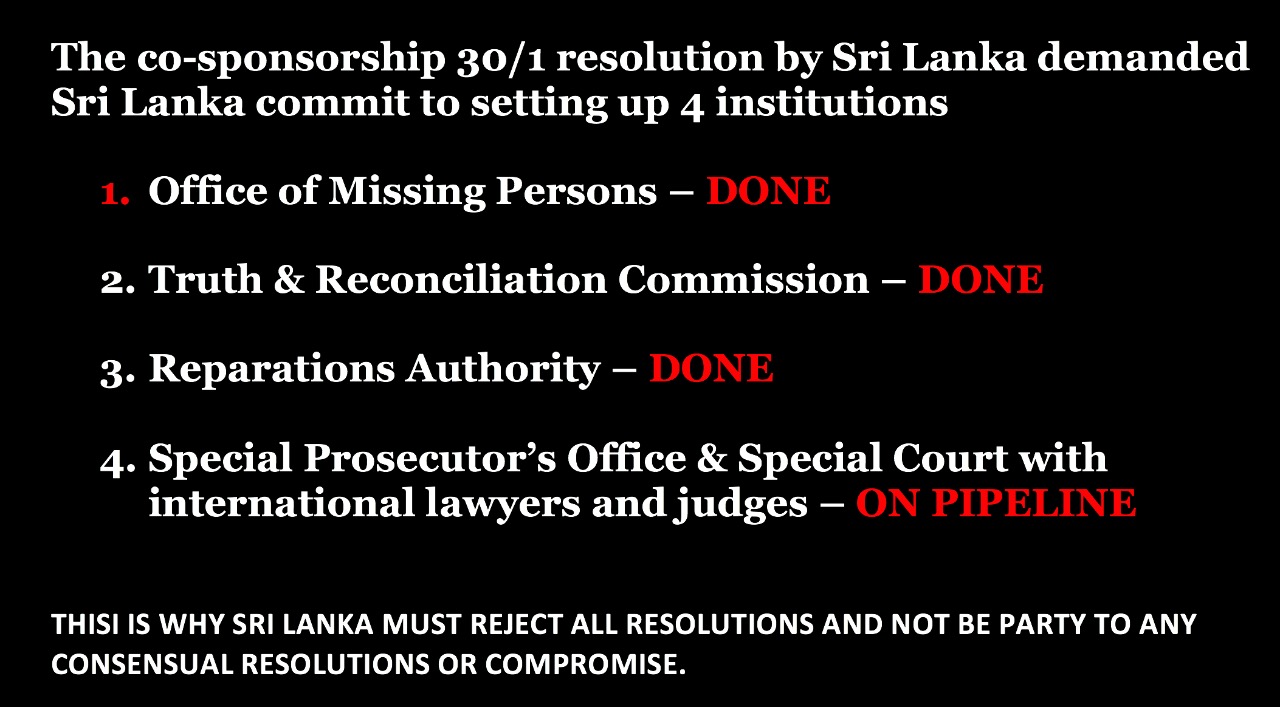