Who is NED & what is its role in Sri Lanka 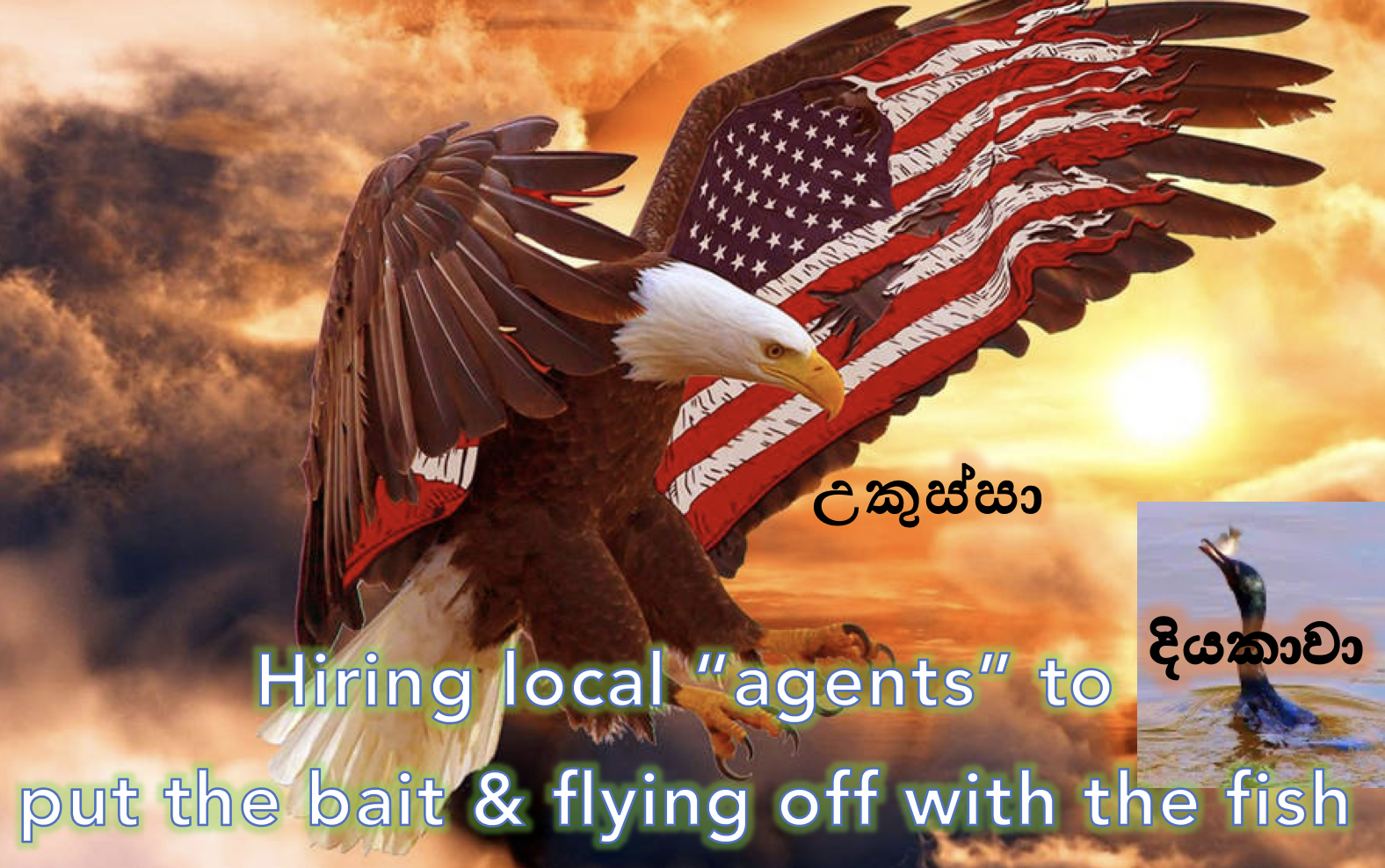 The term “democracy” has become a tool used to undermine democracy in the name of democracy by interfering into the internal affairs of countries & causing mayhem. What the CIA did back in the 1970s has now been outsourced to an entity called NED – National Endowment for Democracy. Entire vocabulary of “democracy” “rule of law” “freedoms & rights” “peace” “reconciliation” are encrypted to mean the opposite of what they profess to promote. NED founder Alan Weinstein called it the “second CIA” in 1991.

The NED was designed to enable bogus “democracy promoting bandwagon” to get closer to the People with initiatives that were tasked to private parties on NED’s behalf. The modus operandi was to hire private entities to do the dirty work of NED’s goals. These private entities became NGOs and Civil Society groups & their heads.

US Govt gives NED funds, NED in turn creates a program, outsources it to a NGO who are tasked to carry it out under supervision of NED or reporting to NED. These NGOs are the vassals for the bogus “democratic values” spread among citizens to advance US strategic interests. This is why countries need to have a mechanism to keep an eye on the programs launched by NGOs/Civil Society as funding is sent for them to “brainwash” citizens under cover of a program that looks quite “innocent” on the exterior. Within the program the goal or outcome is different.

https://www.youtube.com/watch?v=XNZZmErTqbw Why the US National Endowment for Democracy Has Nothing to do with “Democracy”

Inside America’s Meddling Machine: NED, the US-Funded Org Interfering in Elections Across the Globe 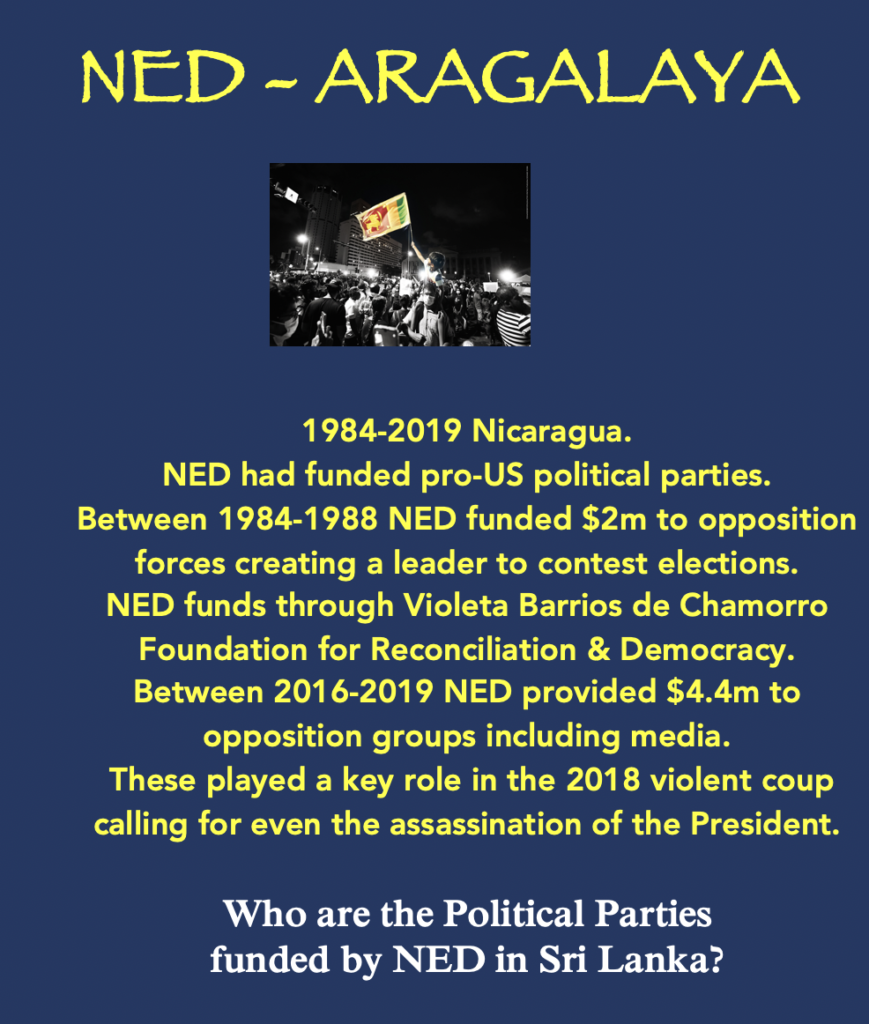 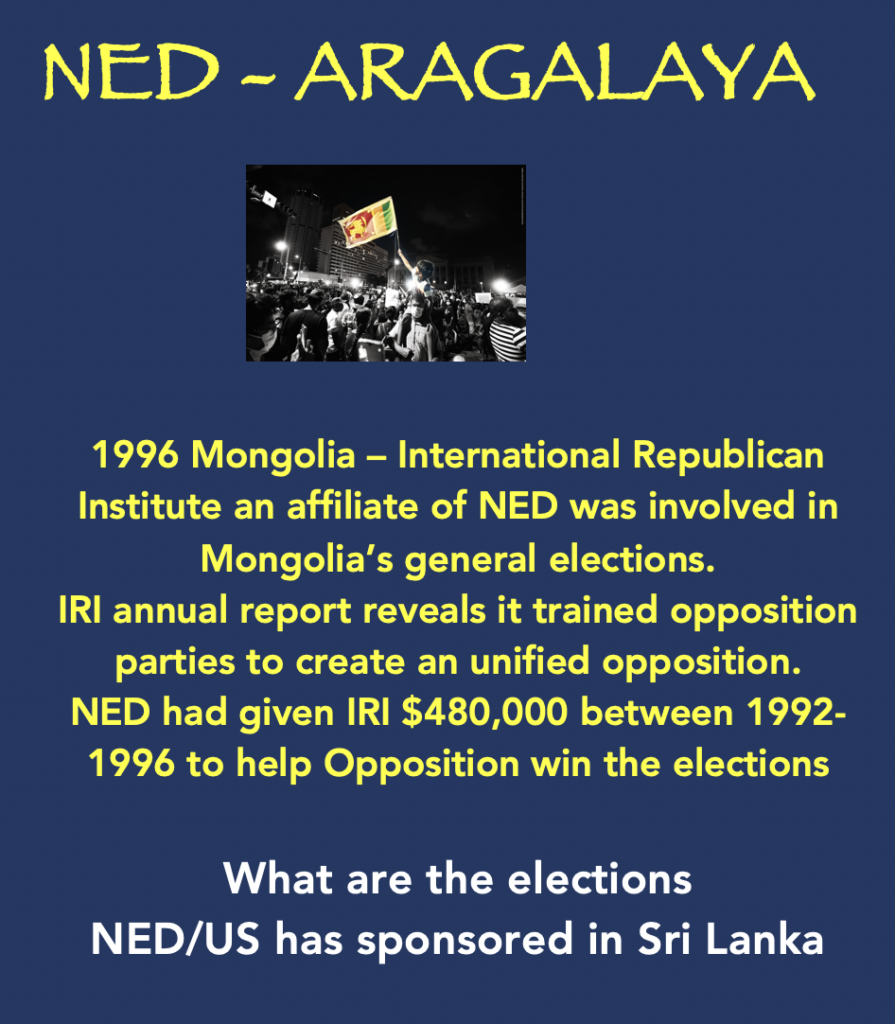 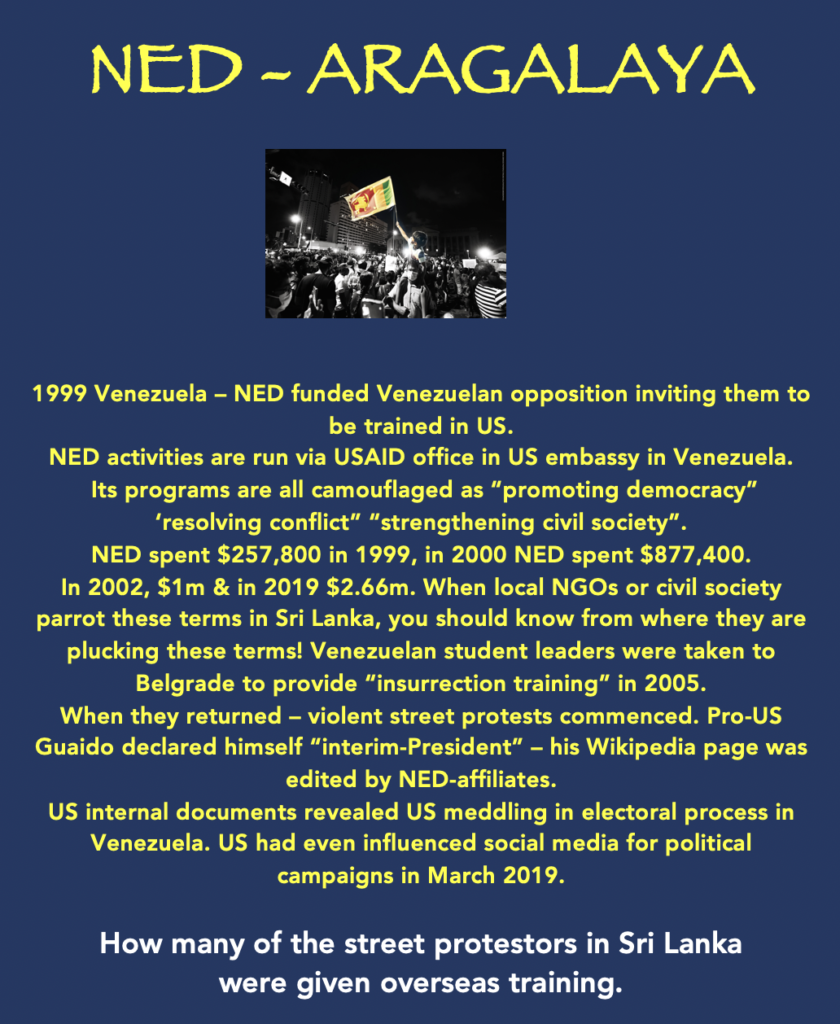 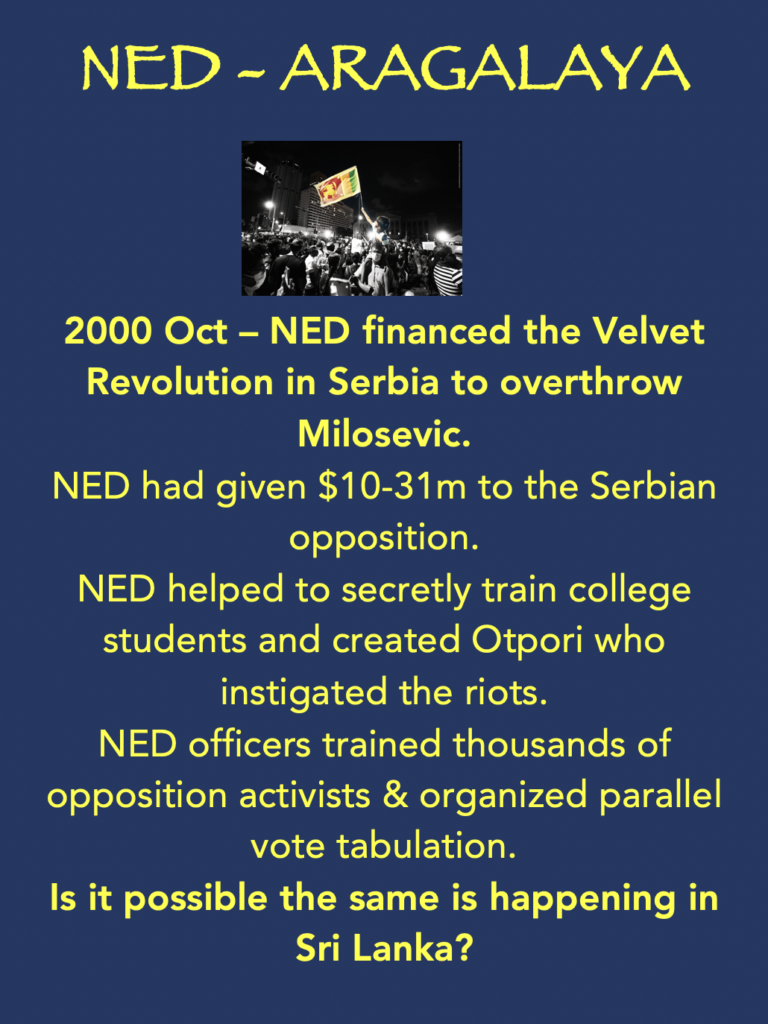 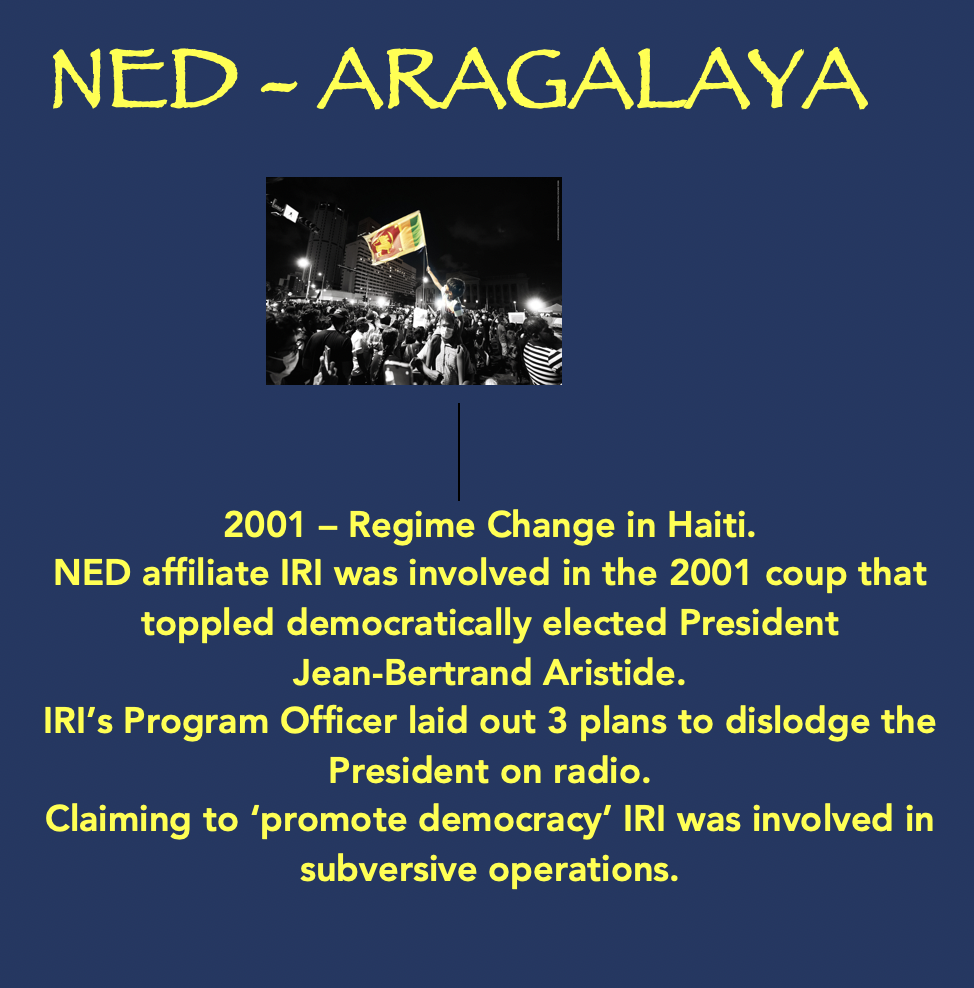 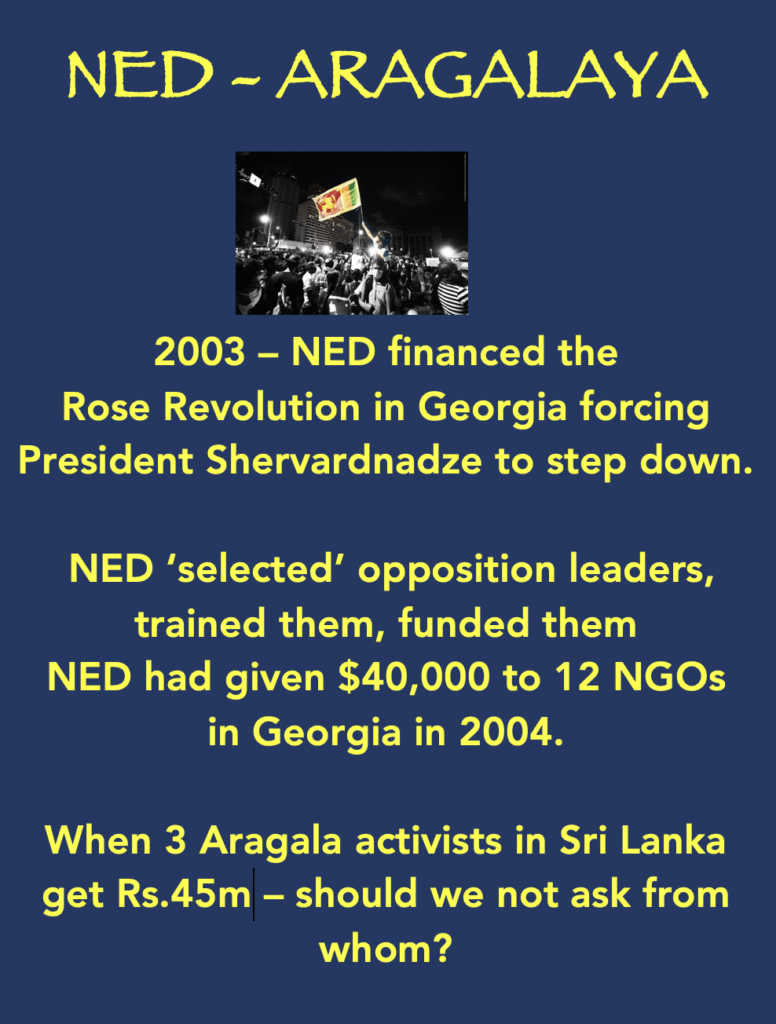 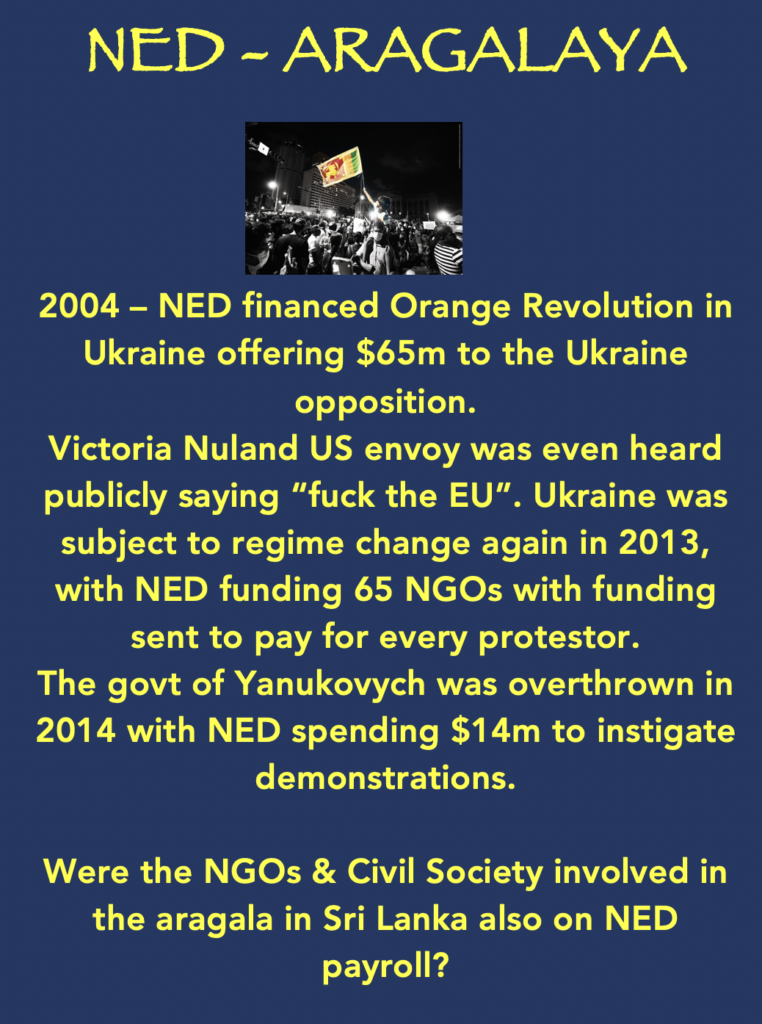 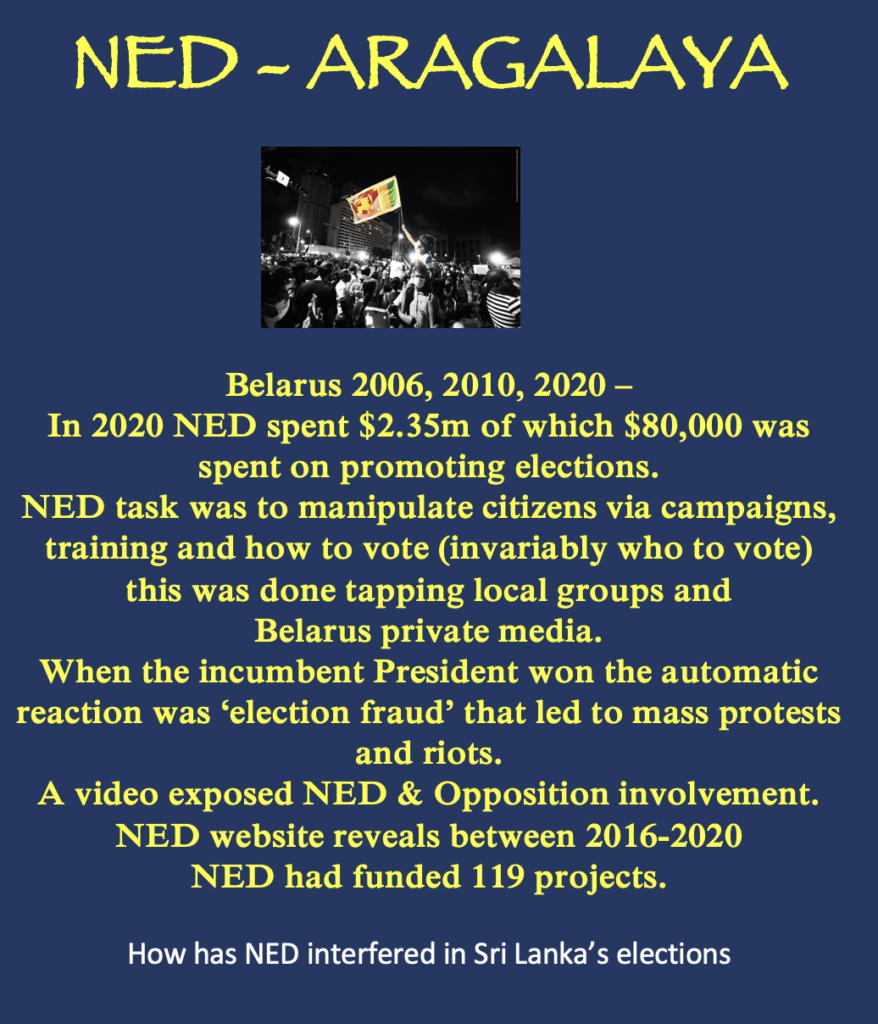 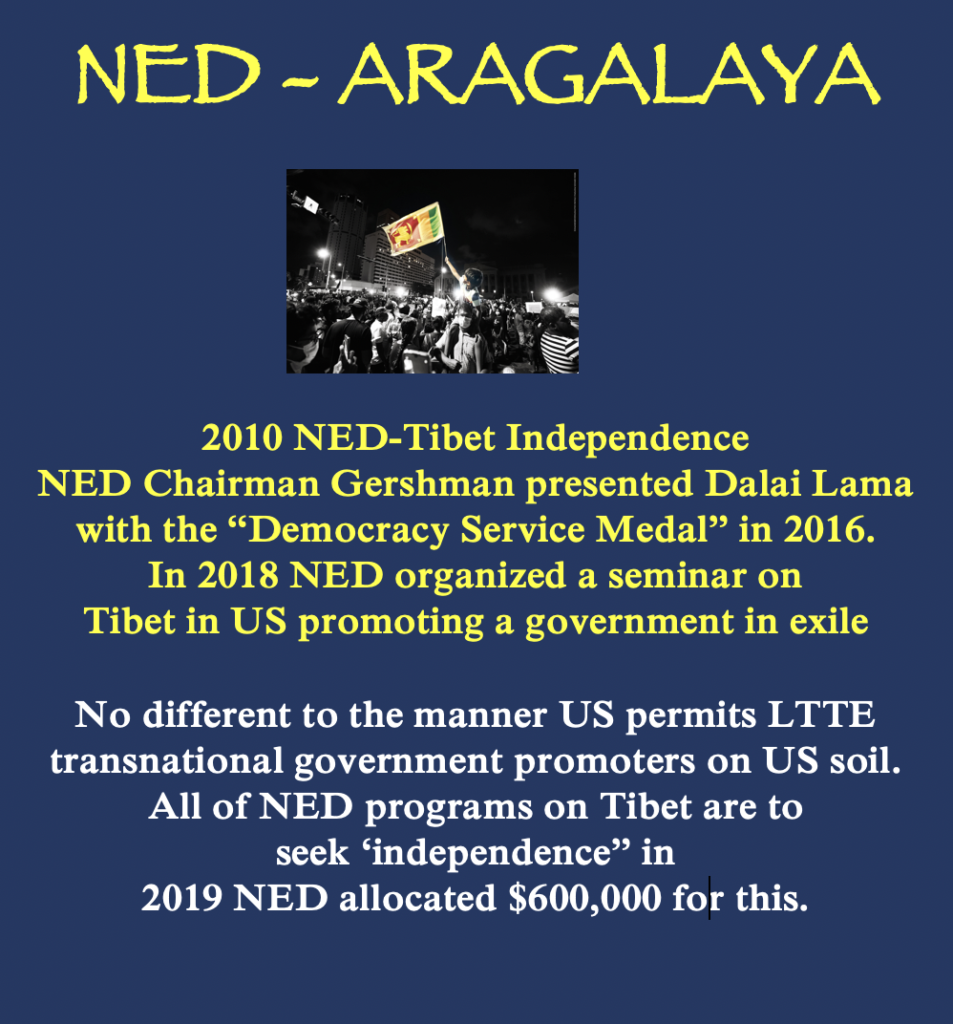 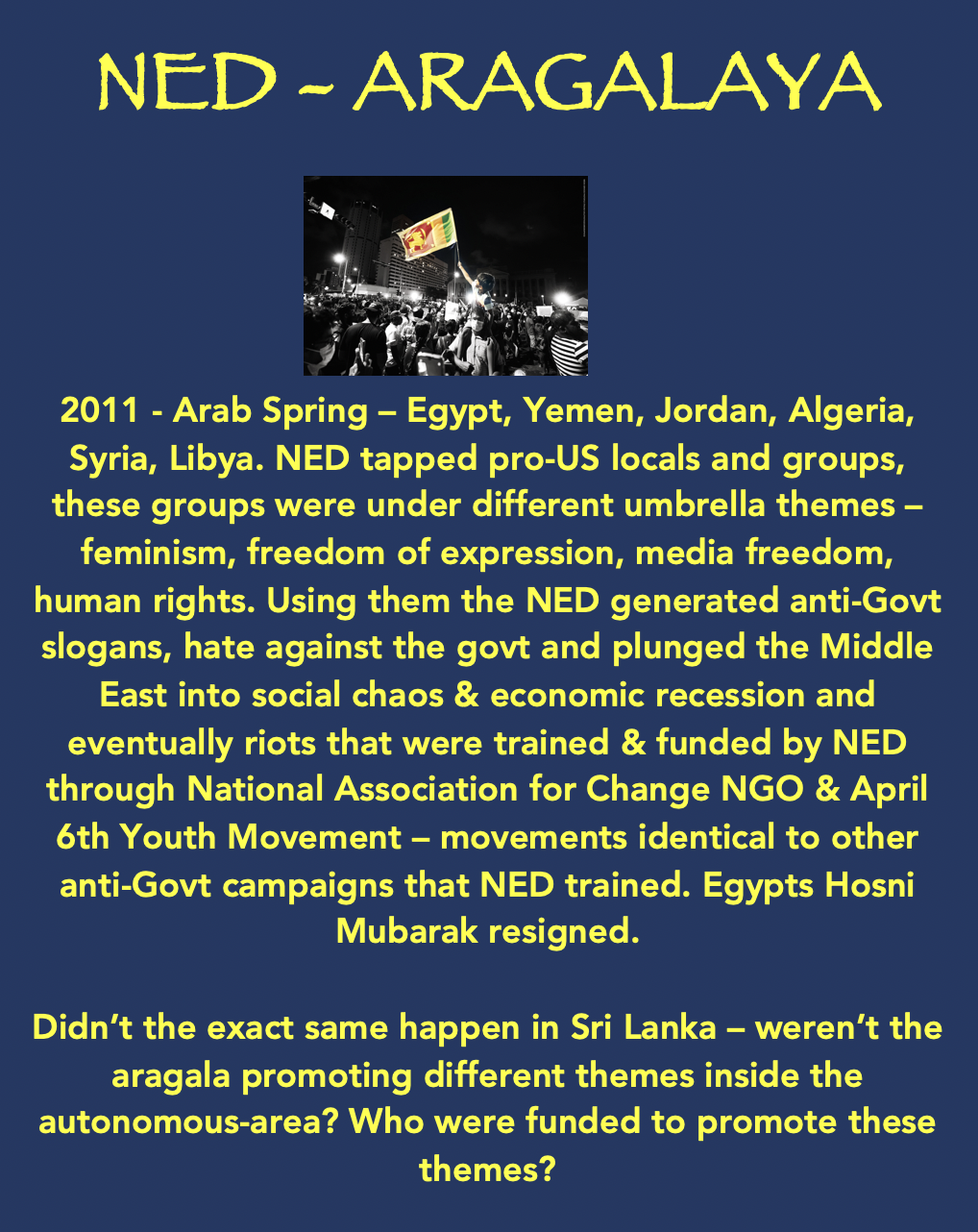 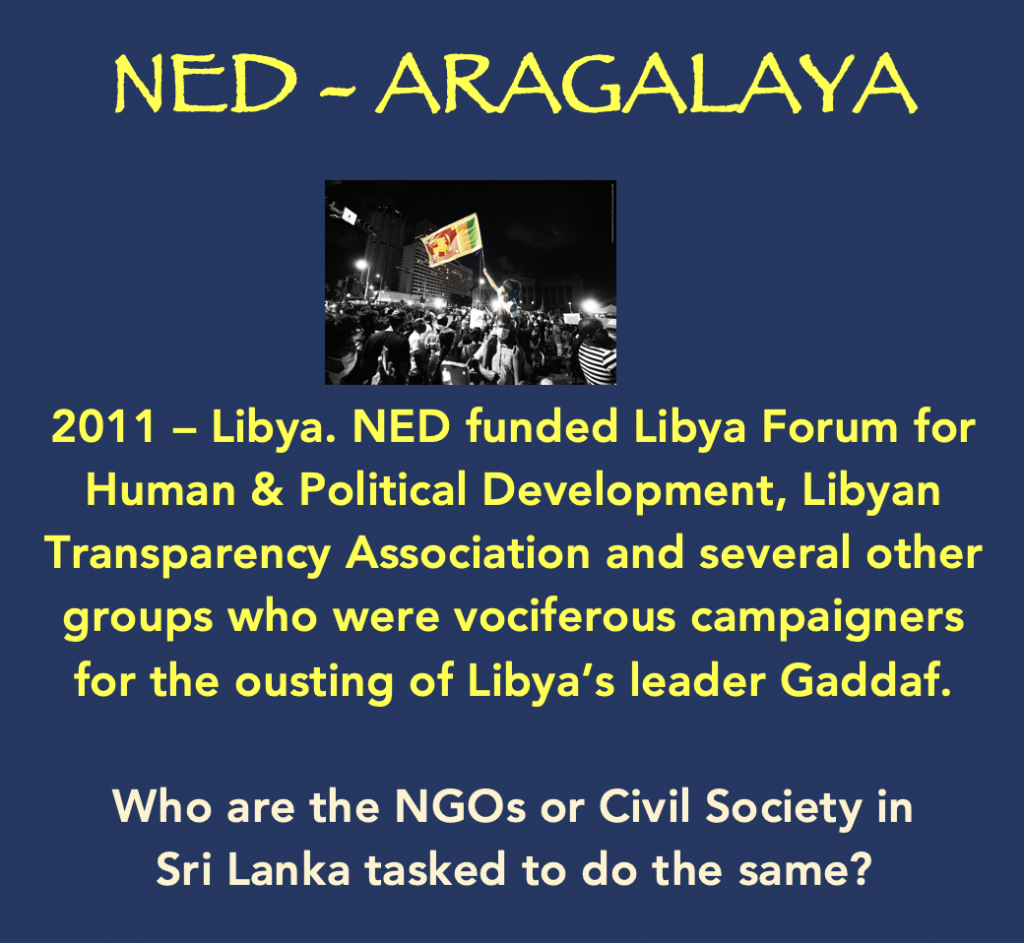 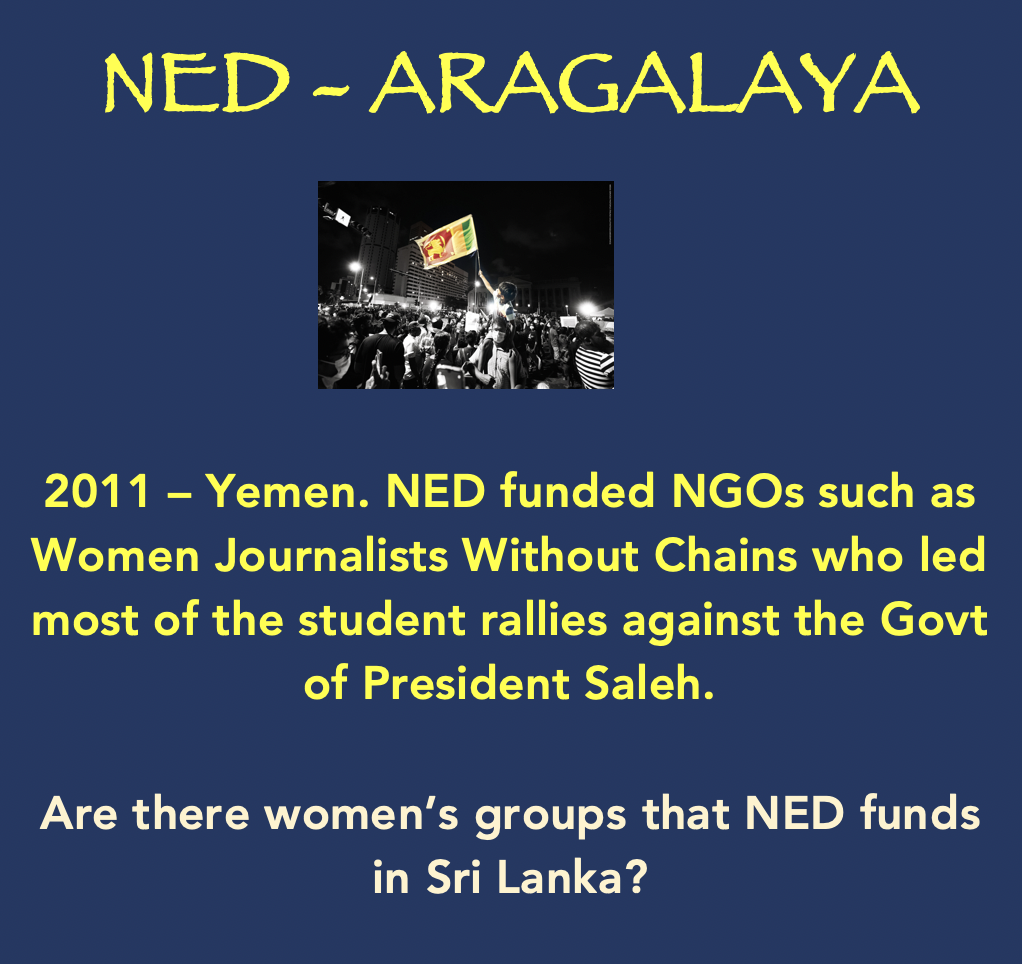 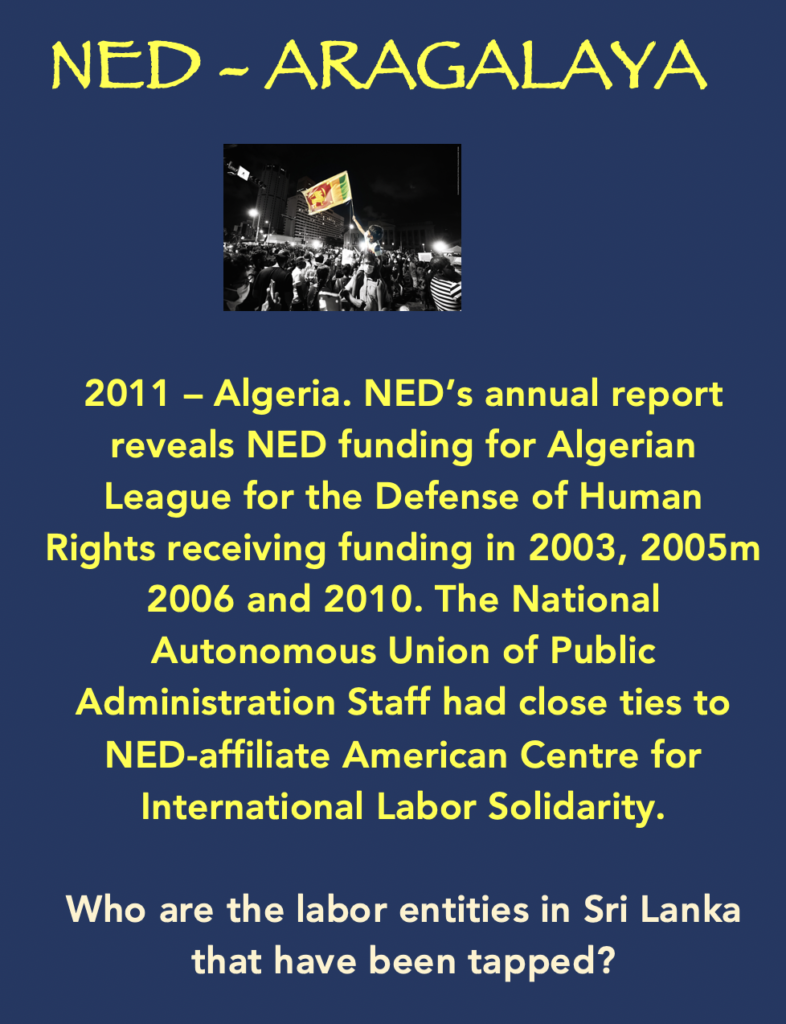 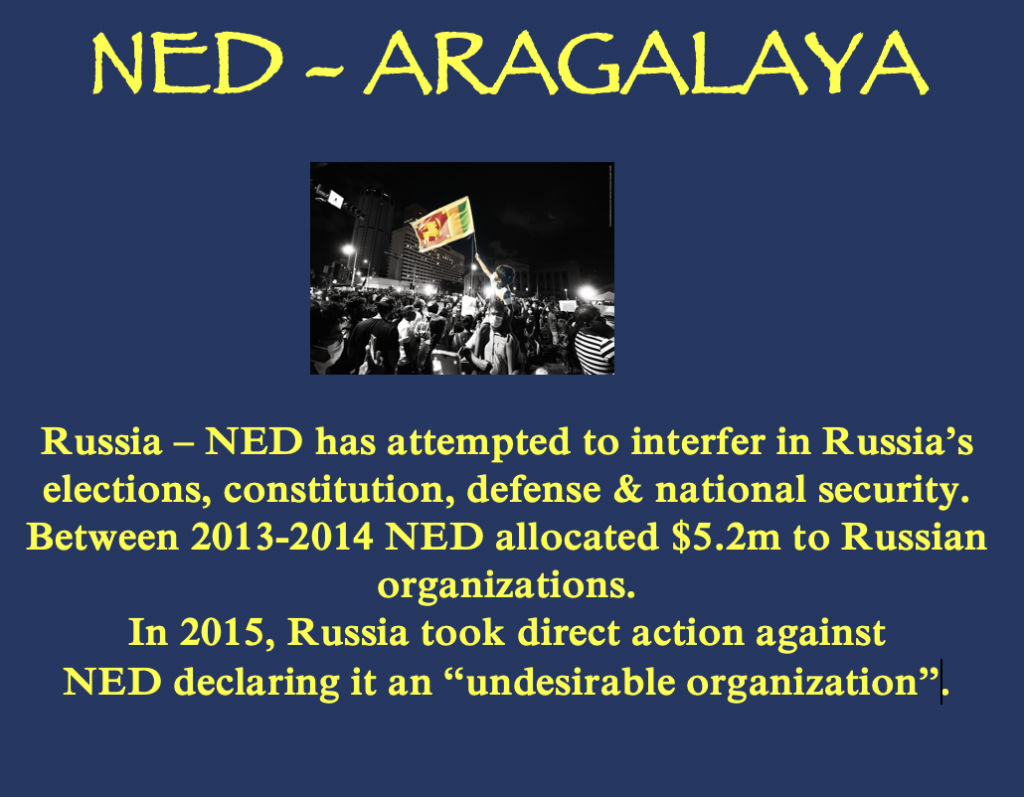 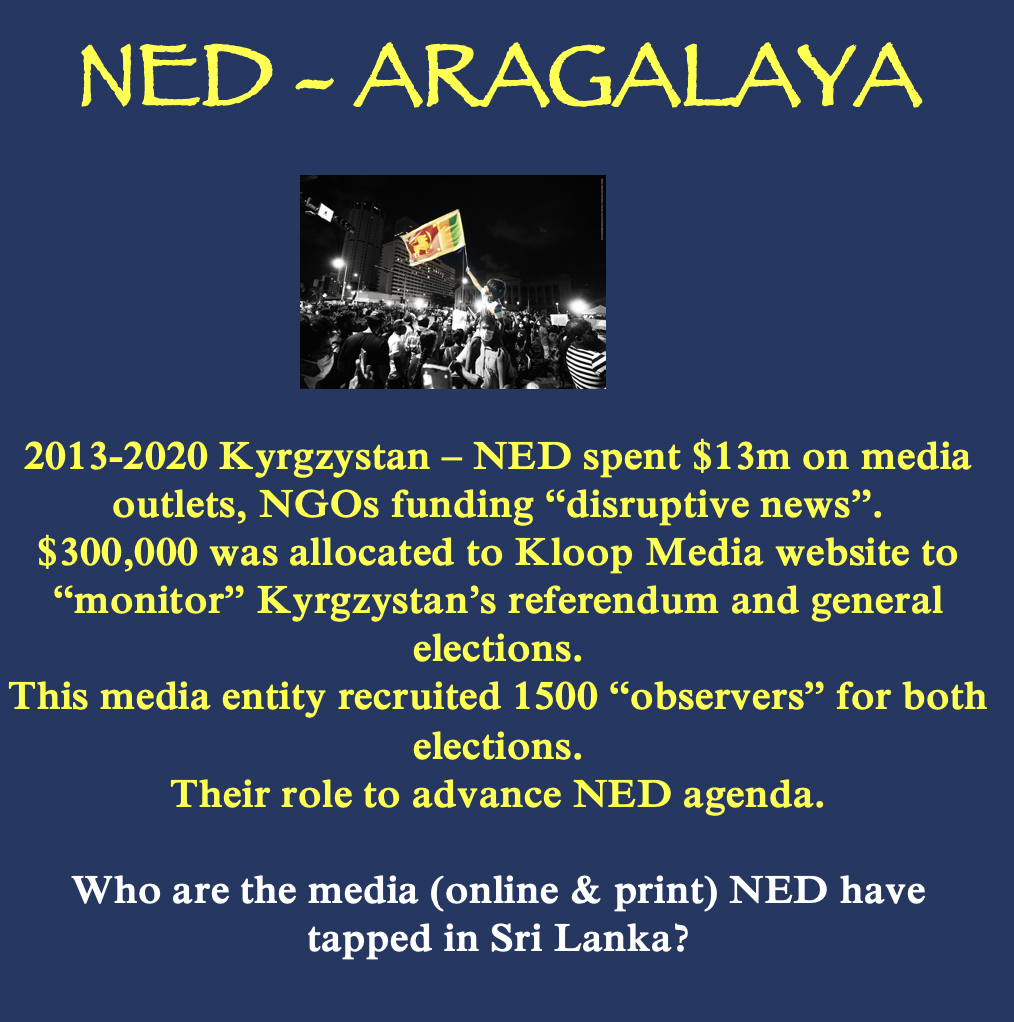 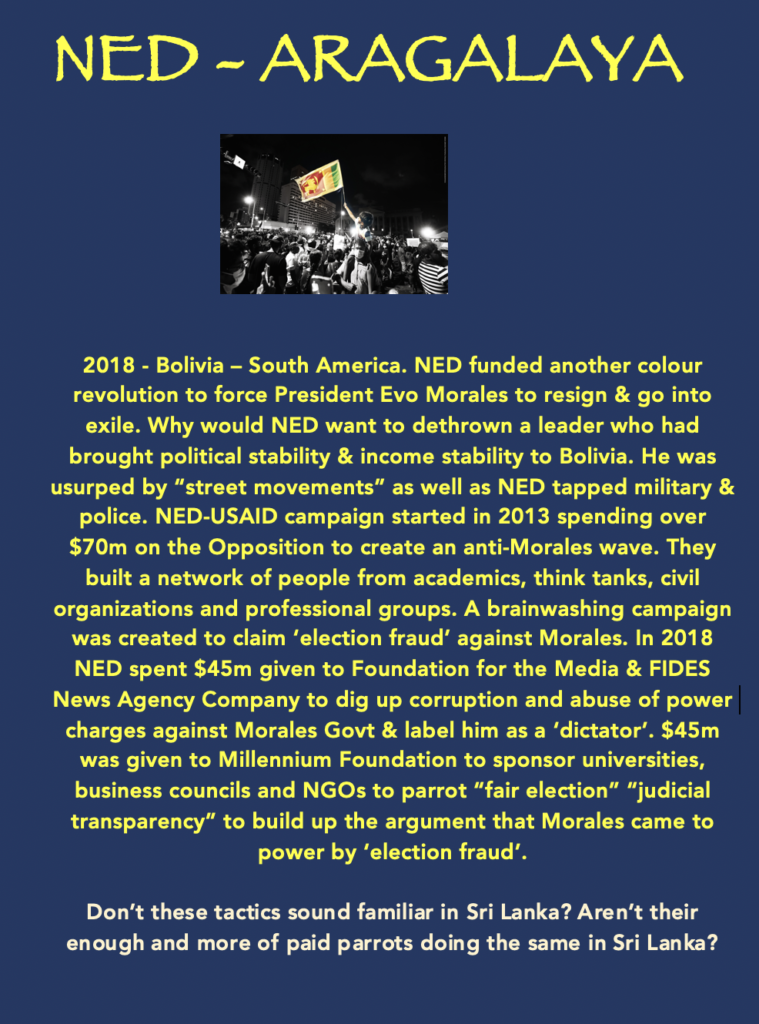 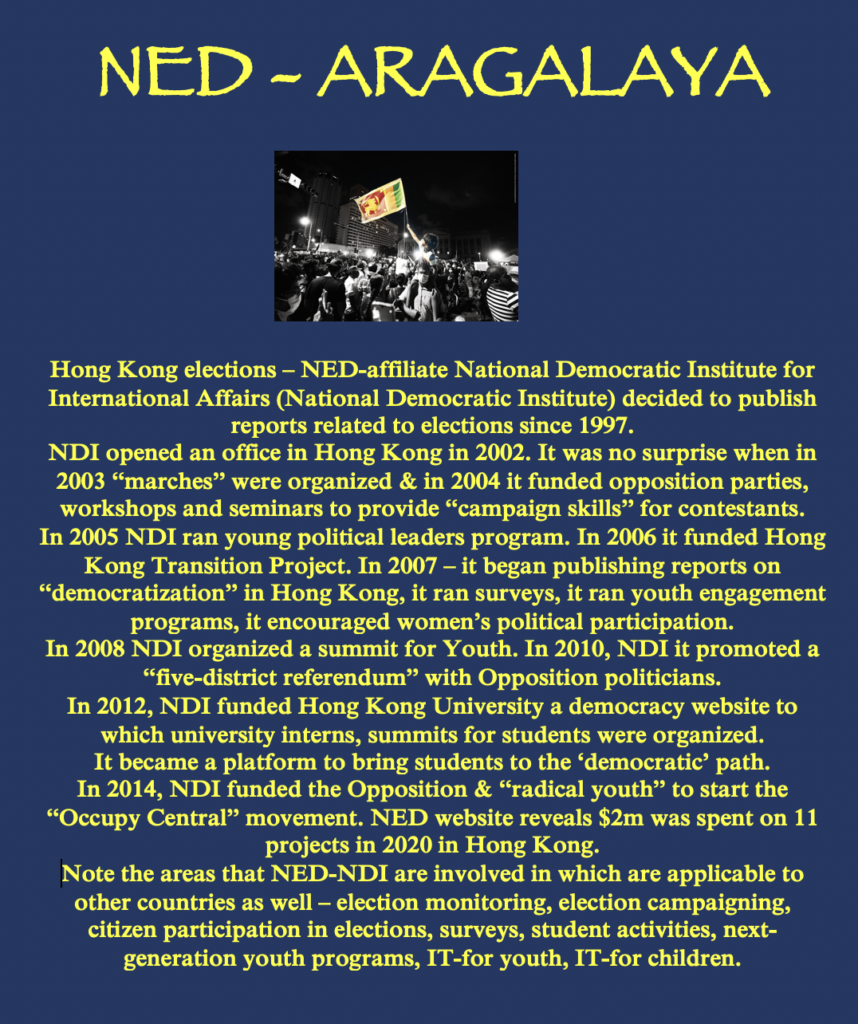 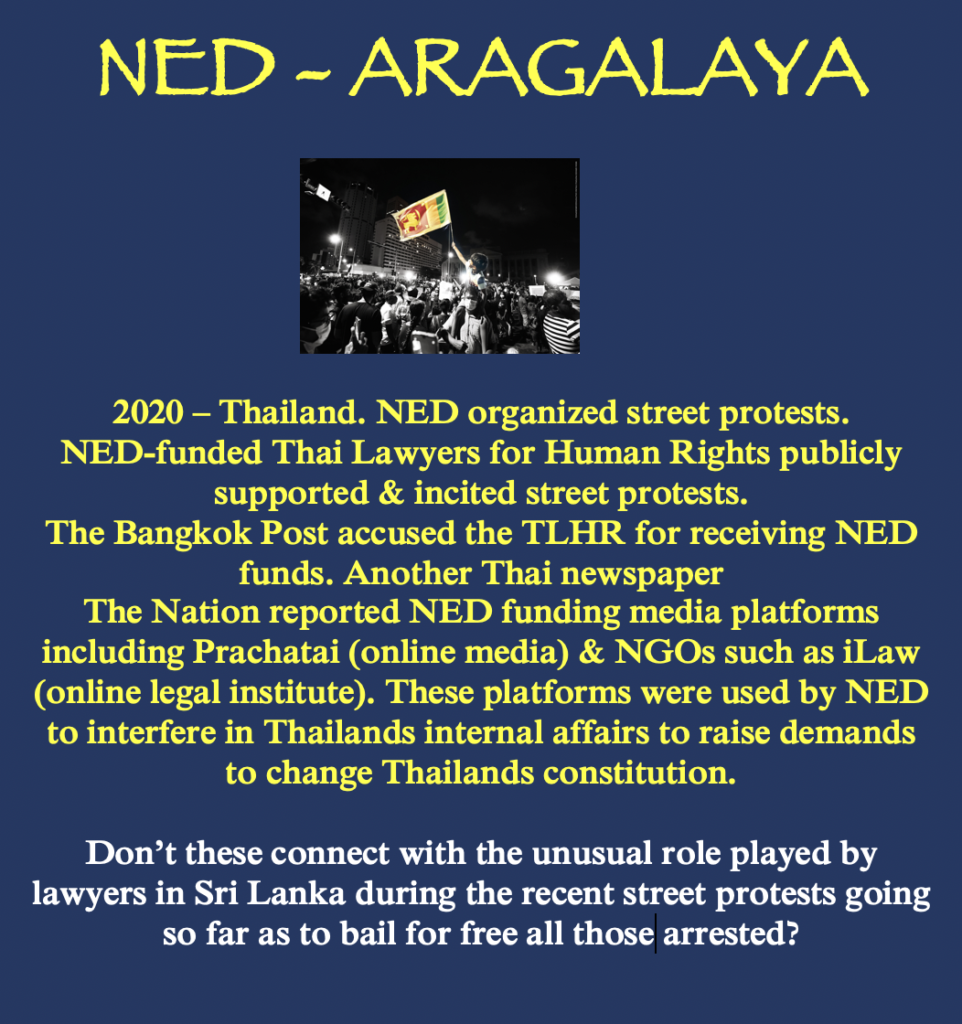 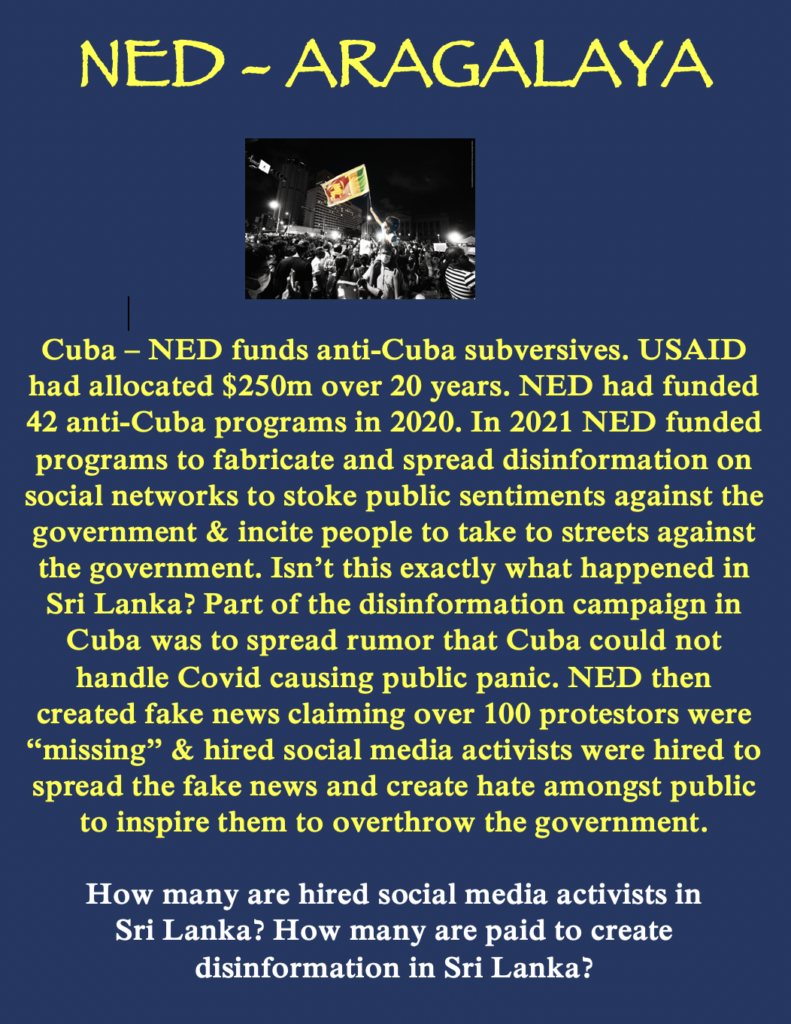 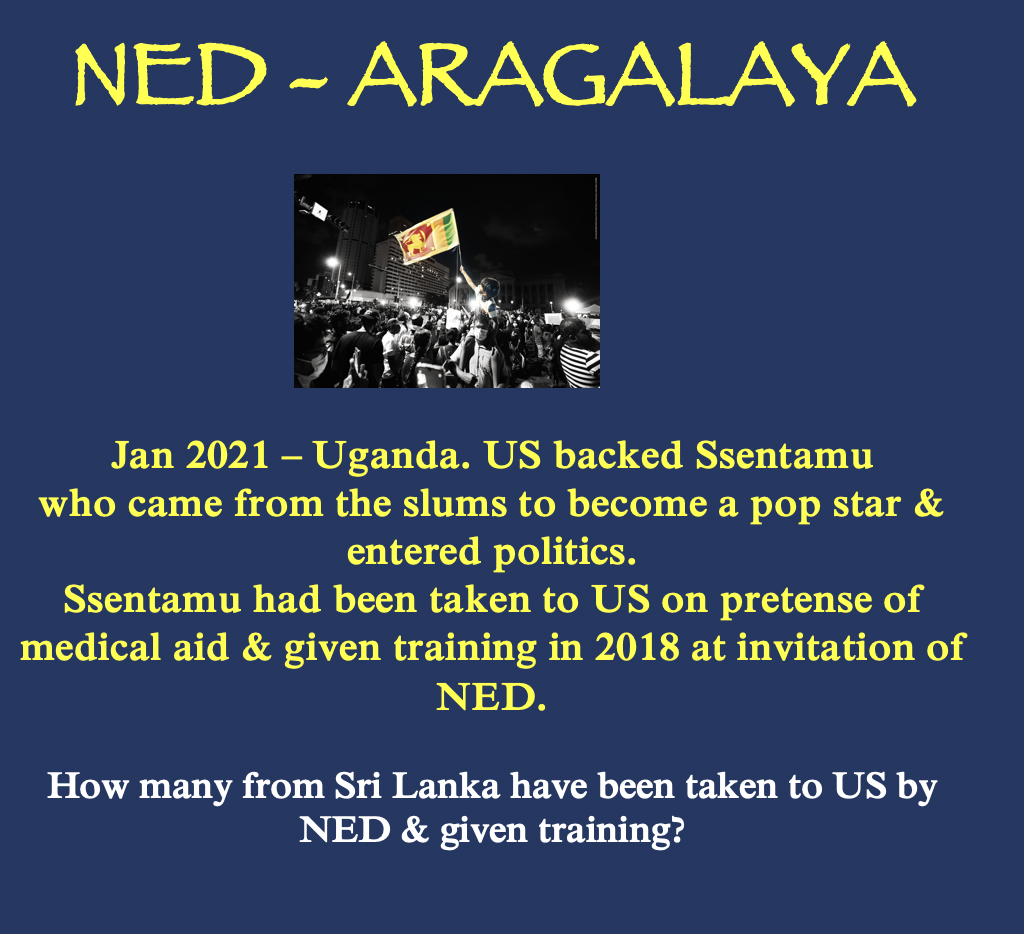 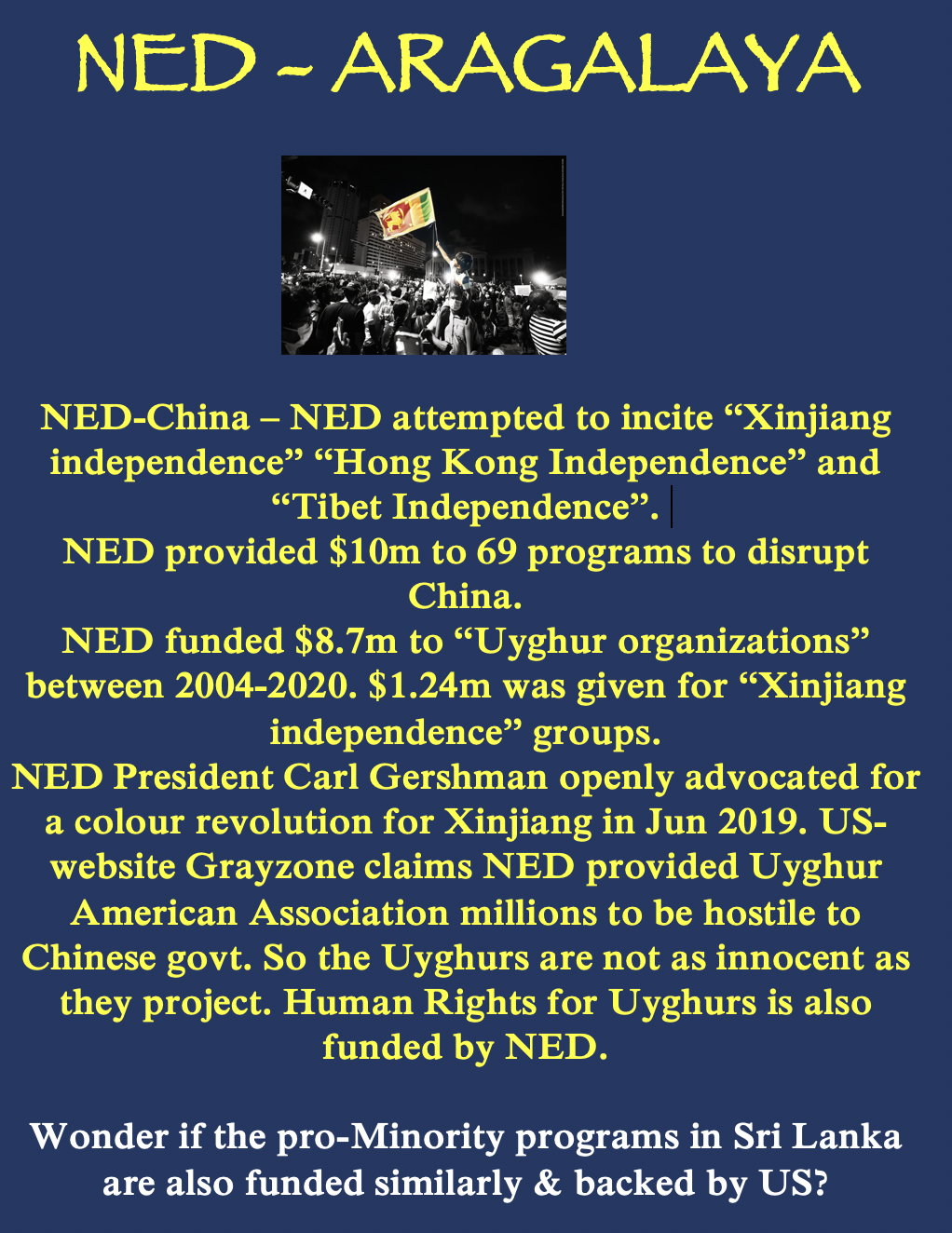 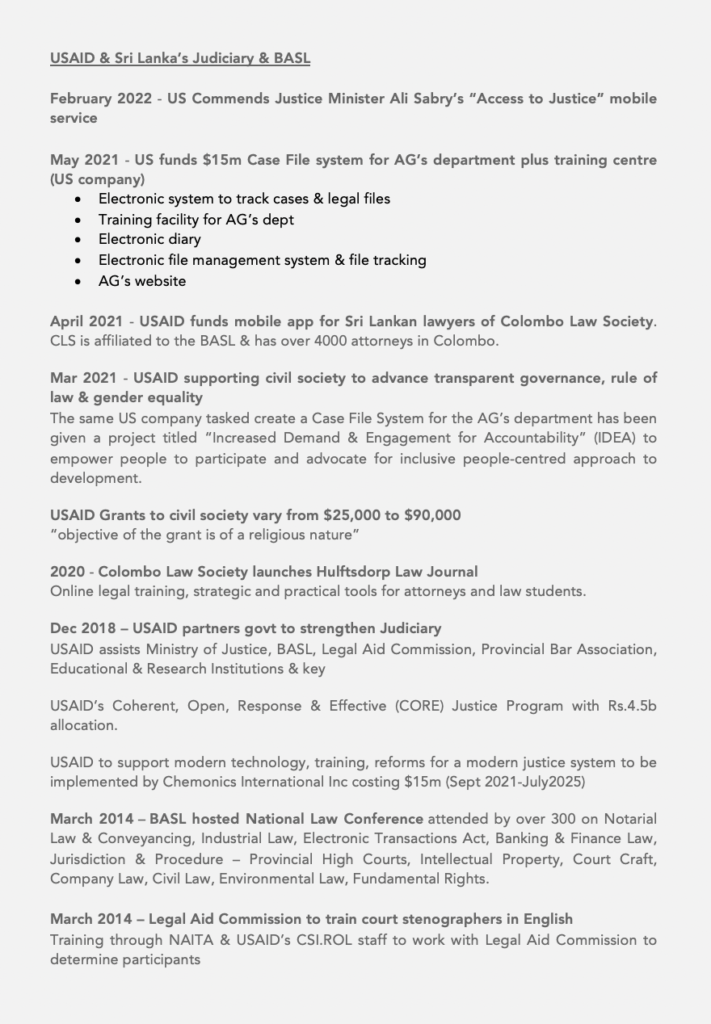 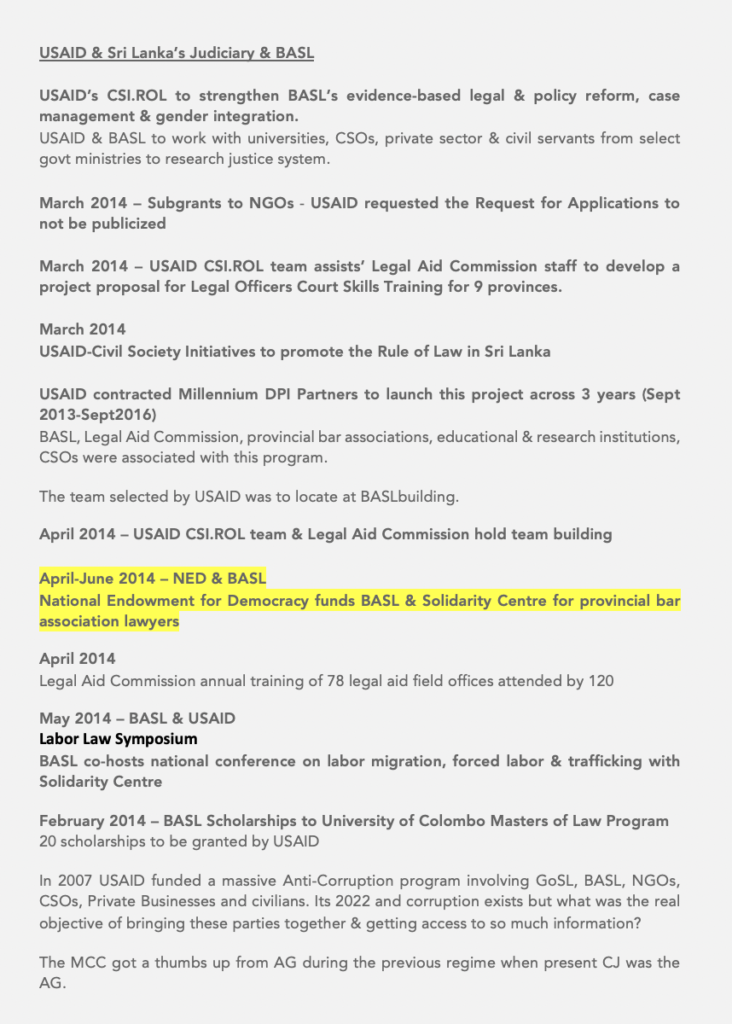 https://www.ned.org/region/asia/sri-lanka-2021/ NED funding to Sri Lanka in 2021 is clearly given in its own website. 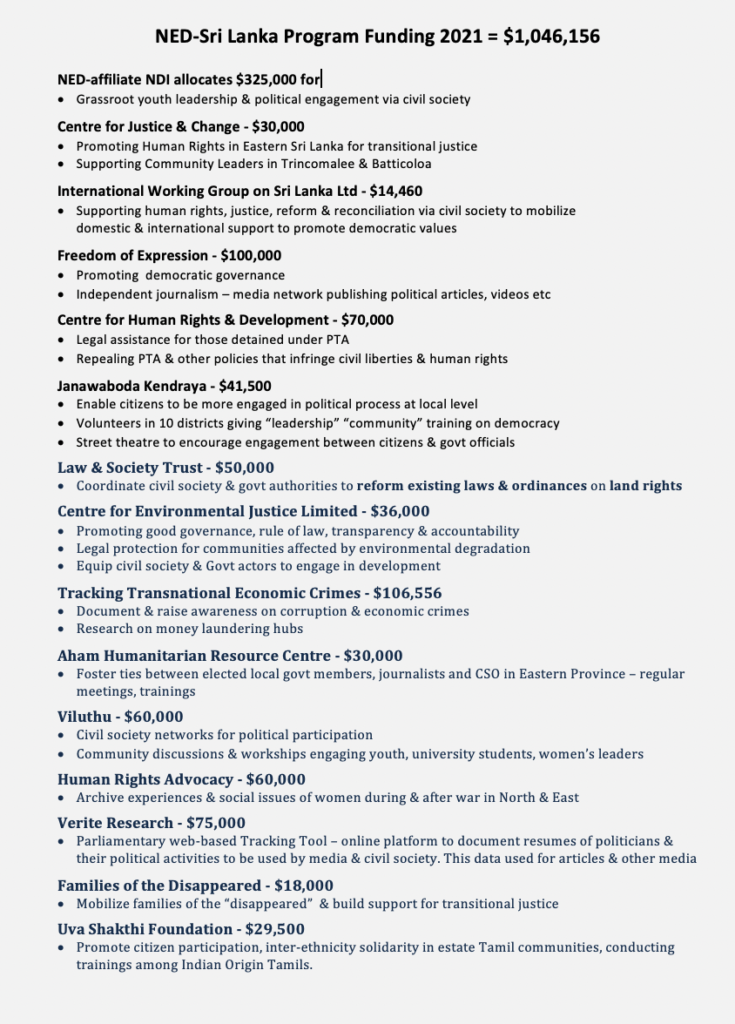 USAID is banned by several countries for its subversive activities. 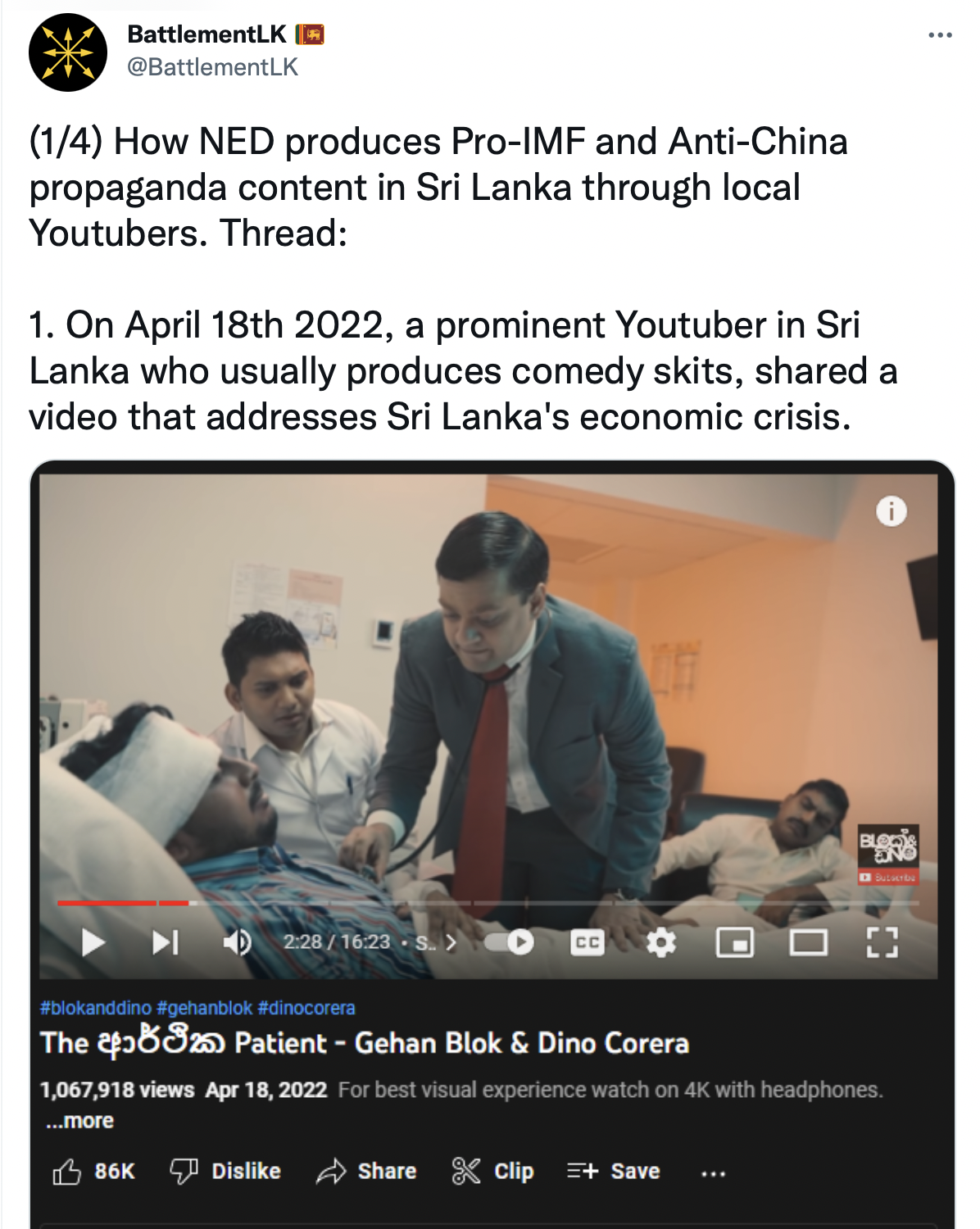 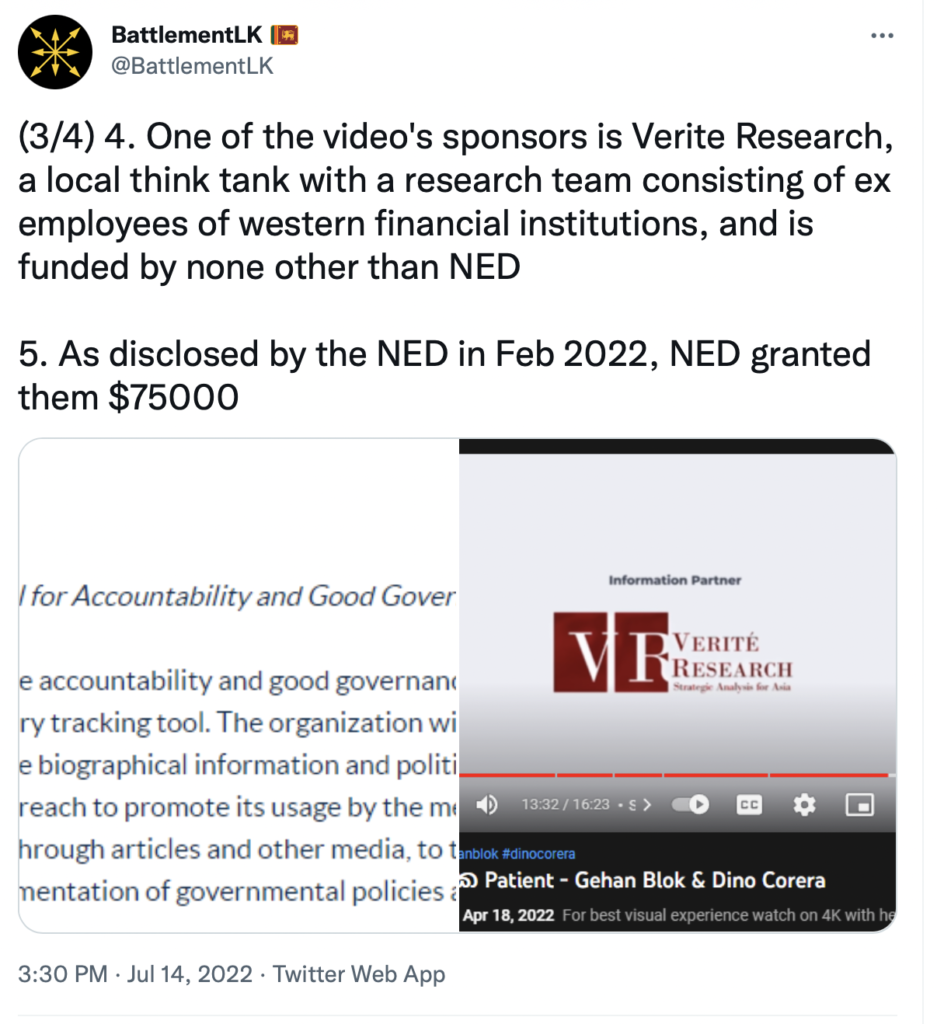 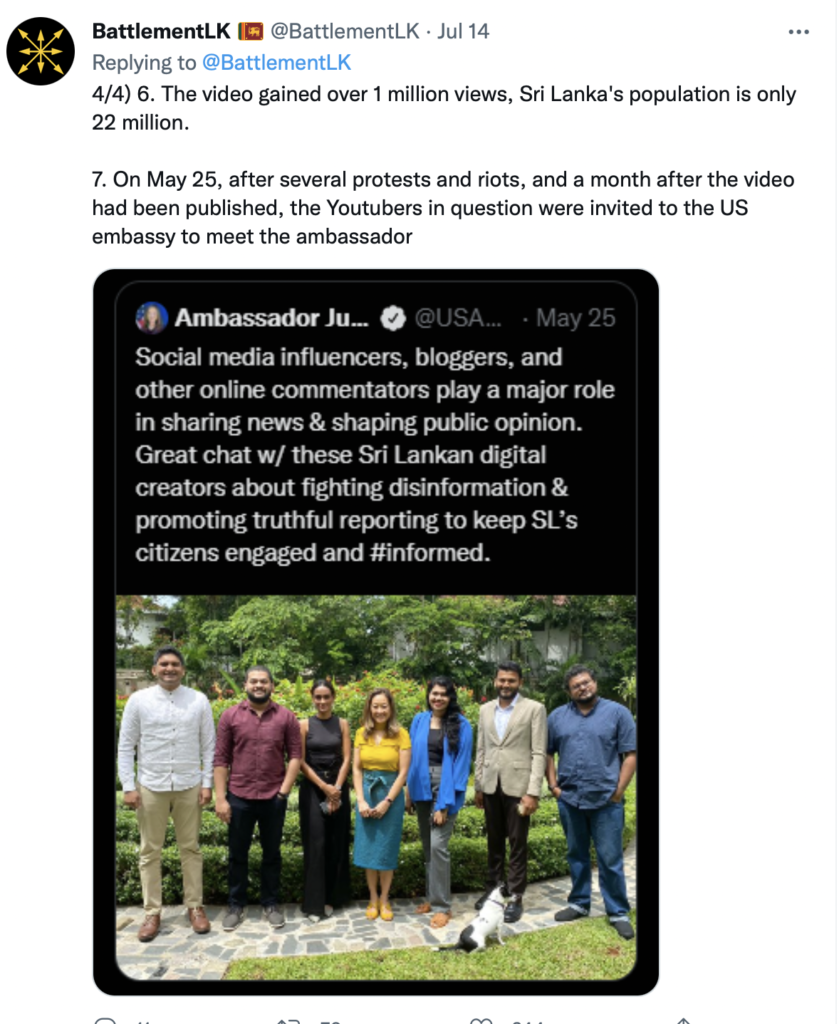 LST was formed by late Neelan Tiruchelvan had on its board of Directors – Chairman Chandra Jayaratne (supporter of yahapalana government) Prof. Jayadeva Uyangoda, G Alagaratnam (BASL President in 2015),

In 2015 Sri Lanka became the 1st South Asian country to be a member of the Open Government Partnership of NDI to which Sri Lanka pledge 15 commitments.

https://www.opengovpartnership.org/documents/sri-lanka-hybrid-report-2019-2021/ Sachini de Fonseka has been selected as OGP Researcher

Thusitha Pilapitiya is the Country Director of NDI Sri Lanka

Sarvodaya’s Vinya Ariyaratne in 2018 formed the National People’s Movement  combining its Deshodaya with United Professionals Movement & 17 civil society groups using slogans like “Together We Can” “Save-Serve-Sri Lanka” to bring a new face to Sri Lankan politics. Nagahananda Kodituwakku of Vinivida Foundation is also a partner of NPM.

We are living in a cuckoo land if we think these same tactics and manipulations are not being applied in Sri Lanka, tapping Sri Lankans and working with NGOs, Civil Society, legal fraternity, media, youth leaders, human rights activists. The manner they quote terms and phrases in vogue among these “democracy” promoters is a giveaway & showcases the training given to them.

The question we all hate to ask is – who are these people on NED payroll, or who are being manipulated as a result of NED-funding to outsourced local entities?

What is certain is that we need to find who are working against the state – be they in the government, in opposition, among universities, among professional organizations, among youth, among media, among public service, among legal fraternity, among judiciary and especially among NGOs and Civil Society.

In looking at the areas that NED targets it is easy to decipher their favored hot spots – elections / opposition parties / youth movements / leadership programs / women / the poor local communities. These are all nerve centres that they can work with against a government pressing the buttons when necessary while building their psyche via programs rolled out through NGOs and grassroot civil society. They have infiltrated into every sphere possible.

The governmental apparatus does not realize the extent of their outreach and people are oblivious to how much they are unknowingly being manipulated via programs on the one hand and via social media platforms as well.

With time people will understand the dangers but it shouldn’t be too late.