Who says MCC is not linked to Bim Saviya (Title Registration)

There is a notion that MCC has nothing to do with Title Registration because it was a project started well before MCC Compact was introduced. The answer is only half correct. Yes, Title Registration Act 21, was passed in 1998 but it was not implemented. It was introduced as a World Bank project and passed as an Act in 1998. First stage was launched in 2007. World Bank funded the project probably sniffing that the terrorist conflict was drawing to a close and the international players needed to alternate ways to keep Sri Lanka on a leash. Let’s not forget the international cartel use foreign investment & aid/grants with hidden intentions and these projects have been tried out in doses in different countries. With more people questioning their entry – their response has been to legislatively pass their projects to make them domestic law yet giving them full diplomatic immunity. With the entry of MCC the Title Registration project began get steam rolled completely ignoring the complications associated with transferring 8.5m land plots which has been following a deed registration system. Now the country is expected to transfer from locally practiced deed system to title registration & foreign/international laws for a paltry $67million.

Torrens Land Title Registration is a foreign title registration system first launched in Australia in 1858. In 1998 this system was introduced not because Sri Lankans wanted or asked for it but because World Bank recommended it. The Act was passed without debate in Parliament or discussion by public. The banks protested by submitting reports, the Sri Lanka Bar Association presented reasons for why it was detrimental and lawyers even made representations later when Mahinda Rajapakse became President.

Title Registration is the process by which Sri Lanka’s private deeds are taken by the State and replaced with an one page title registration certificate. There are various issues associated with this some of which include that title registration is only given to one owner. There is no scope for co-ownership, even a husband & wife cannot have joint-property, issues related to life-interest ownership etc while title registration will also remove personal customary laws.

The process of taking deeds and converting them to title registration & handing the deed owner a registration certificate has been happening at a snail’s pace. One of the main reasons for this is that grievances related to co-ownership, life interest and other issues relevant to its omission in the title registration can only be taken up at grievance stage with the district courts but not after the title registration certificate has been issued. In short, court intervention in Title Registration is only to the district court stage and not beyond. Supreme Court has no adjudication and instead the Commissioner of Title is tasked to adjudicate where only compensation can be given but not the returning of one’s land lost for some faulty reason like fraud or wrong entry. You can imagine the numerous scenarios where hiccups can happen at village level among the poor & legally illiterate.

So this process has been happening since 2007 without much enthusiasm from officials or owners, simply because funding has come.

Keep in mind how FUNDING and INVESTMENTS are modern means of ‘invading’ and ‘plundering’ nations by other means.

Cash-strapped Sri Lanka undergoes regime change in 2015 installing a bandwagon of individuals and parties that have a series of treacheries to their name. Out of the blues a mass murder takes place and within days MCC “gift” of $480m is announced. MCC is the 3rdarm of America’s 3D tactic under the Indo-Pacific Strategy. (Defense-ACSA/Diplomacy-SOFA/Development-MCC)

Every funding from US whether it is by USAID or MCC or any other comes from US Treasury.

MCC & its associates claim Sri Lanka’s 2 issues are Transport & Land out of which $67m was to be allocated for the land project which in reality is the most dangerous & invasive of the 2 projects. The draft agreement is reluctantly made public amidst mass protests. For even the most ordinary laymen, reading the clauses is no different to giving one’s land to a donor to build a house to discover that one has not only lost one’s land, house and evidence that one even owned the land! With all these factors erased one has nothing to prove even to a court. Imagine this happening to even half of the 8.5million plot owners!

MCC land project is plugged to the Title registration primarily because it is a foreign system that foreign legal consultants are experts in.

Even if MCC is not signed the funding ensures what MCC wants as project scope is what is being implemented on the ground. It is extremely important for everyone to understand this. Simply because MCC is NOT SIGNED (YET) do not think that the elements under the MCC objectives are not taking place. It is naïve to think that by not signing, the MCC project is over because what MCC project plan envisages is taking place as all of the projects mentioned above are operational. That these initiatives are taking place because of foreign funding and because of criteria stipulated by international agencies like World Bank, USAID which are the key actors in the MCC overall project is important to realize the nature of their game plan.

Only one pre-condition could not be fulfilled by yahapalana. This was to privatize all 84% of State land. The former PM tried to do so 4 times by presenting the State Land Privatization Bill but did not succeed. Had the Bill been passed all of Sri Lanka’s land would have been turned into private land and there would have been no state land in Sri Lanka.

Without a doubt, alternate avenues must be getting explored to privatize state land. They did try one alternate method the Ruhunu Development Act but that too failed. However, they will be now working on various other models to get state land privatized or devolved to the provinces and away from the Central Government via $$$ funding. Notice how foreign embassies are making a cry over lands being given to provinces under 13a – why are they so bothered about our land? Why do they want forests to be under provinces? Why are they giving funding specifically for projects that eye our resources?

We have to seriously look at the nature of these ‘foreign investments’ and what the exact benefit for Sri Lanka is for what they assume to give us!

Thus even without the MCC signing the initiatives under MCC Land Project is taking place. We should not think that because MCC is not signed Title Registration is a separate project. MCC & US Government must be laughing because what they want is happening even without a signature.

The danger of this lies if another regime change is engineered.

If yahapalana II is returned to power and with 99% of the title registration/e-land registry, State land inventory & valuation is complete, propping a US-friendly government to power will mean a quick signing of MCC and the immediate enactment of clauses 3.9 (intellectual property over all of Sri Lanka’s data) MCC 6.8 clause where MCC will be given full immunity for anything in Sri Lanka may not be even necessary if ACSA and SOFA are signed as this will allow US military to ‘tour’ Sri Lanka when they like, as they like and commit what they like with impunity & immunity. ACSA-SOFA-MCC cannot be taken separately from each other. All 3 are part of US Govt. Immunity to one automatically gives immunity to all US personnel arriving in Sri Lanka. 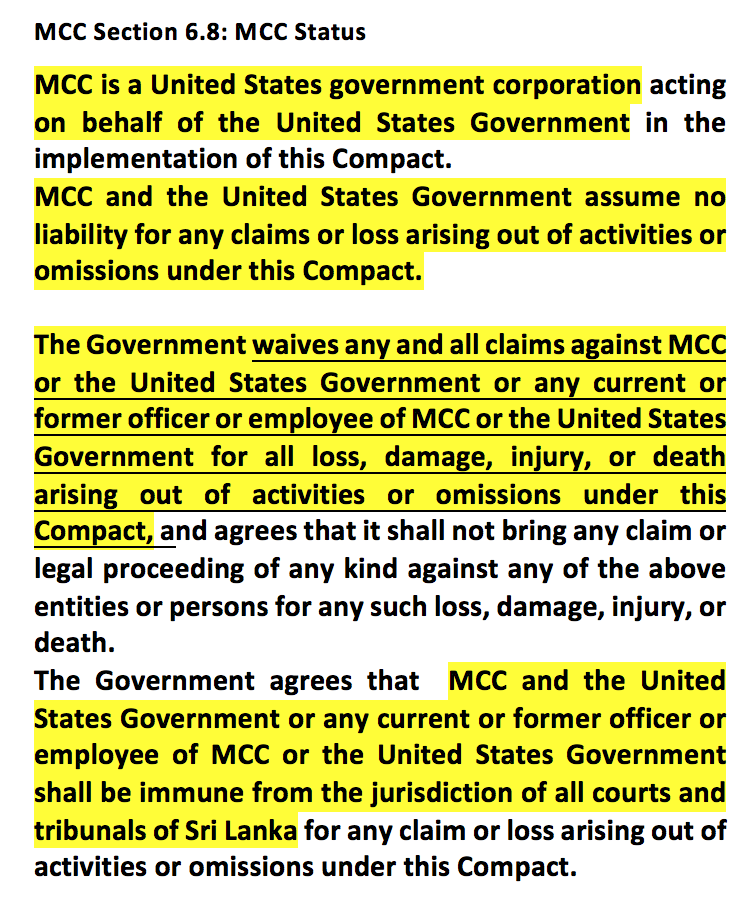 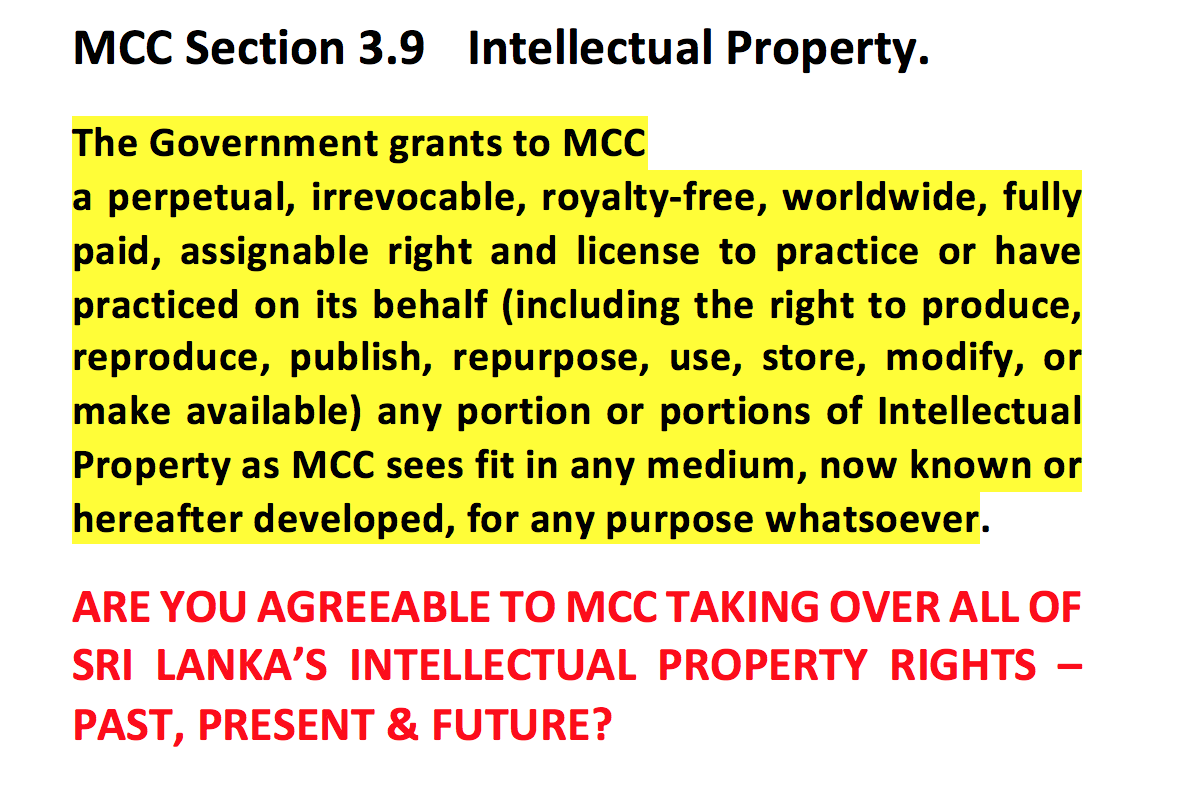 Therefore, it is important that the GoSL realize this danger and immediately come up with an alternative and take local ownership of all land projects especially e-land registry and have our IT experts take complete control with a set of patriotic lawyers to look into every legal angle as well as ensure that all manual deeds are conserved and protected as well as we do have an electronic transaction act that prohibits fully automation of land under an e-registry. Just because a country or a monetary organization is offering a grant, no country should have to cede its land ownership, sovereignty or historical identity to the foreign party & have it changed or erased by them because they recommend to do so with their funding!