Who wants Tamil Eelam – Who are asking Political Solutions? 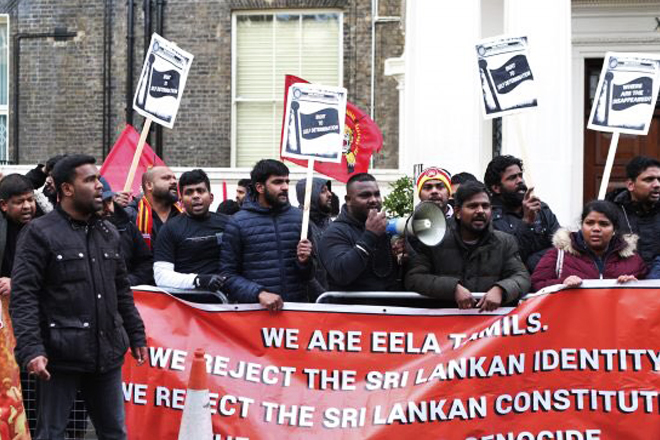 It was the Illanka Tamil Arasu Katchchi party that gave birth to the concept of a separate Tamil State in 1949 a year after Ceylon was given independence hardly valid grounds to claim ‘discrimination’ by Sinhalese since the island was under Western invader rule for 443 years since 1505. Since 1949 there have been various surrogates claiming to champion the Eelam cause and it has afforded political clout for those using Tamil Eelam as slogans while a set of others have found it also politically advantageous to plug themselves to this ‘separating Sri Lanka’ cause for their own geopolitical benefits. Who seek Eelam in Sri Lanka – LTTE Diaspora, LTTE overseas fronts and LTTE political agents in Sri Lanka and who are tagging to their cause – Western Governments / India and all others who feel they can use this to get a foothold into Sri Lanka and exert pressure politically. While the external LTTE-separatist elements demand Tamil Eelam their cohorts the Western/India backers demand a “political solution” implying Sri Lanka has to give what the Eelamists want and we should not be naïve not to realize this combined game plan. Why should the demands of the people living in Sri Lanka be ignored by catering to the demands of the people not living in Sri Lanka or unlikely to be living in Sri Lanka even after their demands are fulfilled?

LTTE borrowed the Tamil Eelam cause from Tamil politicians.

Tamil Eelam cause remained & was given oxygen by the bandwagon of people who were covertly assisting and others who rechristened themselves under new organizational names.

This was clearly articulated to the Indian Premier by Sri Lanka’s elected President Gotabaya Rajapakse recently.

What is this ‘National’ ‘problem’ that Sri Lanka is supposed to suffer?
Who says so? It is the same bandwagon of players who have created the problem and who wish to be part of the solution for it affords them opportunity to plug ‘their solutions’ which are not realistically speaking solutions that benefit Sri Lanka or its people.

During LTTE terror reign everyone except LTTE and LTTE families / LTTE supporters were safe.

How many Tamils that supported LTTE (politicians, urban Tamils, foreign living Tamils) used their own people as bait and did not raise a voice against Tamils who were victims of LTTE?

Did they stop 1 Tamil child from being turned into a child soldier?

Did they stop 1 Tamil child from being trained to hold a gun and instead giving a pen to study?

During & after LTTE terror reign external parties (foreign govts, NGOs, Media) did not take the side of LTTE’s victims.

We can reaffirm this by the recent Swiss Court ruling that LTTE is not a terrorist organization.

All foreign governments had enough of data on LTTE arms procurement and other illegal activities – why didn’t they take action to stop LTTE terror? Because it served their interests to keep LTTE terror as a beggars wound – not curing it completely, just dressing it from time to time.

From all of the ‘political solutions’ presented since 1980s (Indo-Lanka Accord / 13a / 2002 Cease Fire Agreement etc) – the solutions have been in the interests of politicians or foreign governments and have shown no benefit whatsoever for the people whom the solutions claimed to be drafted on behalf of. The ceasefire agreements and peace talks were all only opportunities given for LTTE to silently regroup and re-arm.

The peaceniks were all brokers to present a tamasha and fool the masses through their well-articulate diplomatic gibberish.

Unprovable slogans are their mighty swords – these can be drummed and these serve as excellent tools for the international players to make threats, appoint international investigations, threaten to impose sanctions, travel advisories, denial of visas, diplomatic demands and adopting many more fisticuff methods against a government. All these tactics are already operational – OISL, ‘genocide’ ‘war crimes’ ‘human rights’ ‘rule of law’ ‘threat of sanctions’ are just a handful of in vogue tactics since 2009.

But, are these a solution? Why should a national solution be only for one community segment only? How can a solution omit justice to 85% of the rest of the communities?

So what is the National Problem?

Our National Problem is that we do not know what the problem is!

Those that claim Sri Lanka has an ethnic problem must answer why such problems did not exist prior to 1505?

The nomenclatures presently used are all christened by former colonial invaders who birthed much of the problems via their divide and rule policies and questions their moral right to appear & offer solutions – how genuine will these solutions be!

Is the National problem the same as articulated by the 74% Sinhalese, 15% Tamils & 9% Muslims?

According to Sinhalese – what is the National problem?

According to Tamils – what is the National problem?

According to Muslims – what is the National problem?

According to Burghers – what is the National problem?

Then our next question is who should determine what the problem is?

Is it only the Sinhalese majority?

Is it only the Tamil minority?

Is it only the Muslim minority?

Is it only the Burgher minority?

Is it the Foreign Envoys?

Is it the human rights activists?

Is it the politicians (Sinhala, Tamil, Muslim)?

Is it only the elite of Sri Lanka (Sinhala, Tamil, Muslim)?

Or is it the ordinary PEOPLE who account for the majority among the Sinhalese, Tamil, Muslim & Burgher community?

The more important question is in whose interests & for whose benefit primarily must these solutions be drawn?

Is it the Sinhalese villages who were attacked by terrorists & killed?

Is it the Sinhala families who lost family members killed by LTTE?

Is it the families of the Sinhala armed forces/police who sacrificed their lives on duty?

Is it the Tamils who were victims of LTTE (includes all forcibly conscripted, killed for refusing to obey LTTE orders)

Is it the Tamil LTTE families whose LTTE child died during hostilities with armed forces?

Is it the Muslim villagers who were attacked & killed by LTTE

Is it the Sinhala & Muslim families chased out of their homes in the North?

Is it every victim of LTTE terror?

Is it every victim who died as a result of collateral damage by bombings of armed forces?

Is it for the politicians & elite to enjoy power & privileges?

What do victims want?

If they’ve lost a home – they would want a home to live in,

if they’ve lost the only person who was providing them food – they would want some means of livelihood to keep the family fed?

If they have children – they would want schooling, means of employment

In what manner will devolving powers to politicians, giving land/police powers etc solve their predicament – have they even asked for any of these?

Do the victims know what self-determination is or heard the word devolution,

Why is no one catering to the simple things they want and ask and instead trying to waste time and money on what they are not asking for?

So for whom & for whose benefit are these big ‘solutions’ being thrown at every international negotiation table?

Politicians be they Sinhala, Tamil, Muslim want a ‘solution’ that will sustain their power and role as politician, keep them in power & ensure that they are in control. They have no qualms about transferring power to opposition so long as periodically they can sit in power. This game we have seen since 1948.

International players want ‘solutions’ that are within their periphery of control too. So when they speak about mechanisms that are ‘internationally acceptable’ what they imply is they want solutions where they can poke their nose in from time to time which generates & sustains their livelihoods too (to this international list of players we can plug – UN, INGOs, NGOs, local NGOs, civil society, rights activists etc) foreign governments of course will insist on having a say either way.

So what we need to understand is that all these delays in formulating ‘solutions’ really is to find something ‘acceptable’ to all of them and not the ordinary people – something that satisfies their lust for comfy positions, globe-trotting opportunities, enjoying perks of office, VVIP status etc.

So have any of the innocent victims, had a say in any of these ‘supposed to be fantastic solutions’, were they the one’s that proposed these solutions, will these ‘solutions’ benefit them?

No citizen would ever ask to cut a country to pieces when it would mean they would have to take permission to enter each newly created state.

No citizen would want to divide an island.

Clearly all these divisions and devolutions and decentralizing proposals were not what people wanted or asked for but what a handful of people devised so that they could redistribute power among themselves and turn citizens into modern day slaves.

We come back to the question which unfortunately remains unanswered

– What is the National problem?

– Who determines the national problem

– Who decides the solution?

– for Whose benefit is the solution(s)?

Was conflict between Sinhala people and Tamil people – NO

The conflict was between a non-state armed group & the Sri Lankan Armed Forces & victims were Sinhalese, Muslims, Foreigners including Tamils.

So, there is no way that the conflict can be termed ‘ethnic’.

Who was this armed group?

Well there were several Tamil armed groups but LTTE emerged victor after killing the leaders of the other groups & scaring them off.

So what did LTTE demand? 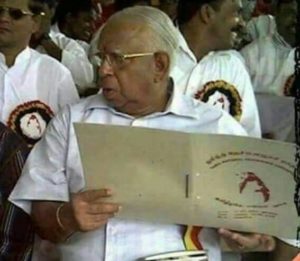 LTTE political arm was TNA formed in 2001 and after LTTE’s ground force was eliminated TNA took over the baton.

So where do Tamil diaspora fit in.

They are all-powerful propaganda lobby operating from western shores where they thrived during LTTE rule via nefarious illegal and legal operations that gave LTTE $300m annual profits. With no maintenance cost for LTTE combatants, procurement of arms & ammunition etc that annual profit must now be far more and utilized for other influential purposes – retaining international lawyers, buying international personages to speak on their behalf are just some of the wonders the LTTE international kitty has been able to afford. When all things budge for money, LTTE diaspora know when to throw what & strike bingo. LTTE Diaspora is certainly a formidable force because of its propaganda & its kitty.

The underlying question and common aspect of all of the problems Sri Lanka suffers is that the issues come at every juncture Sri Lanka sees some positive growth in development & economy & gets dragged behind again. Why and who serves to always keep Sri Lanka in a bottleneck?