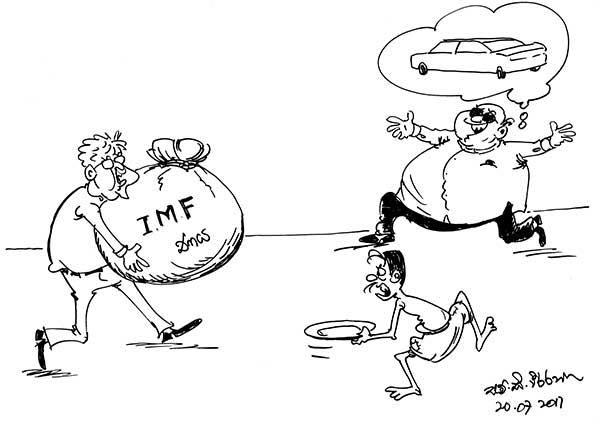 We have taken 16 loans from IMF since 1965, countless IMF officials have been landing & leaving advising every Government on how to manage the economy and yet we remain trapped into debt with no plan to come out. Instead of pruning the military, why doesn’t IMF insist on pruning the Govt starting off with reducing unlimited perks of politicians, the useless Provincial Council system along with unnecessary staff before trying to destabilize the national security apparatus of Sri Lanka?

IMF’s demand for free trade zones, reduced tariffs & import duties further reduces govt revenues to serve the people. Lifting of Govt-subsidized price controls also raises costs for consumers especially the middle class & poor. IMF’s demand on property rights & other perks for foreign investors is again promoting elite privileges only. A Govt has no choice but to seek more loans but no means to repay as all avenues have been drained by IMF.

It is interesting the players promoting going to IMF.

Are we intentionally being kept in debt?

However much the pundits glorifying IMF loans may say, the reality is that money is artificially printed given electronically as SDRs (Special Drawing Rights). Sri Lanka has taken 3,586,000,000 SDRs. These are not currency but countries use them to transact as well as pay back loans even back to IMF.

More & more it becomes clear that Sri Lanka cannot delay formulating a national plan of growth, development where stimulus has to be given to the middle income citizens and austerity has to be implemented for the small segment of rich. The middle class & poor cannot be taxed any more than they have – economic pundits in Sri Lanka must realize this.

In drawing up the national plan, we will have to think of ways that the State apparatus can be both service & profit oriented while benchmarking where cost cutting can and should take place.

The rich & elite need to honestly ask themselves how many pay taxes for all that they enjoy given by the State. The manner companies evade tax, how they are sheepishly taking out their profits & depositing in foreign countries while making a fuss over the need for “good governance” reeks hypocrisy. They too are part responsible for the economic crisis.

The JVP emerged unannounced. The LTTE emerged & flourished with Western-Indian backing. Post-LTTE their sponsors sought revenge from the players that defeated them. So much for their forgive & forget reconciliation mantras. That LTTE ground force is no more does not lessen the threat for the operations of the LTTE fronts together with runaway LTTE have not diminished. Their quest with gun is now quest with pen & the quest to separate Sri Lanka, demands the presence of the Armed Forces.

Contrary to the silly notions of some Colombo elite, the Armed Forces cannot be disbanded & then recalled in an emergency. All of the Colombo elite and pundits would have disappeared if a calamity as that which we experienced with both JVP & LTTE emerges. The Easter Sunday was also a good example that we have another debacle in the horizon. This further requires the presence of the armed forces & intel on call. Let us not forget that the suicide bombers were all rich, educated, socially accepted individuals – therefore we may never know who else is being indoctrinated to become the next suicide bombers. This entails the presence of intel & armed forces to be ready for any unexpected circumstance.

That the armed forces & civil defense force also have their own agri units, with storage & transportation was seen during the covid crisis where the armed forces again came to the rescue to provide vegetables to people, doing a yeomen service. This was immediately stopped as some powers that be panicked thinking the public-armed forces unity was not too good for their agenda. However, what needs to be highlighted here, is that the agri apparatus of the armed forces can and should be strengthened and there is no reason for anyone in particular the LTTE agents or the NGO agents or even IMF to object. What kind of a spineless Govt or Parliament do we elect if they can only bark at the people but worship the enemies?

If the IMF is so concerned about helping Sri Lanka get its house in order – why could they not do so the 16 times that IMF provided assistance to Sri Lanka?

If the IMF is so concerned about corruptions – why are they not going after the corrupt politicians and public officials & demanding they be sacked first?

If the IMF is so concerned about reducing the cost to the state – why are they not looking at the areas where the costs are more?

When the people are all claiming the Provincial Council system is a white elephant, why does the IMF want its continuance instead of asking to close the PC system & with it the staff in it who provide no meaningful service to the people & these roles can easily be handed over to the Local Govts to do. Restructuring of this is essential.

Should we not look at all of the over staffed Govt offices, corporations etc? Should they not be pruned before targeting the armed forces, who are a professionally trained outfit that cannot be trained over night or re-recruited overnight in case of emergency. Unless, this is the whole aim of disbanding the armed forces, with intent to dislocate Sri Lanka’s ability to bring reinforcements in the event of a terror situation!

When the entities that seek to prune the armed forces (local & foreign) are key players that supported LTTE terrorism, separatism & disunity in Sri Lanka, it is natural for the sane to wonder what their game plan is. This request to reduce is a carry forward of their demand post-LTTE defeat to confine the military to barracks, close down military camps & remove the military from the North & East. Now their latest sing song is “reduce the military”. By now, people should realize the sequence in their demands & the hidden motives behind it.

However, it is baffling that the politicians are in agreement, unless they are threatened to – either prune the armed forces or face pruning their own privileges & perks. Probably, this threat may be hidden from public & that is why they are boldly claiming to agree to IMF demands.

Would these politicians agree to reduce their own security contingents first! Why should their wives, children or their domestics be given military escorts even for private events! The military men providing security to the extended families certainly should be reduced & instead these men can be used for more important roles, especially in times where strikes take place, they can be used to support essential services. They should also continue their agriculture drive, but that is unlikely to happen because the mafia & their international networks would not want a disciplined army venturing into areas that they cannot influence.

Sri Lanka can certainly get back on its feet, but to do so the cuts have to be done at the right places. What we have is a bunch of people thriving on the poverty of the people & to sustain their livelihoods, people are being unfairly taxed. IMF is simply watching as it enables the West to fish in troubled waters.