Why is UK Labor Jeremy Corbyn & John McDonnell taking side of Tamils & not Jews? 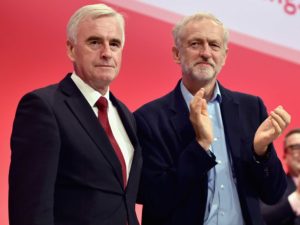 UK is holding general elections. Anyone contesting should be trying to represent the interests of the people in the UK and not issues relevant to other countries which the government of those countries should solve. How representative of the British is the Labor Party? Some of the Party stalwarts have been regularly engaged in speaking about issues relevant to other countries more than what the Brits are going through in Britain. More than 14 million Brits, including 4.5 million children, are living below the breadline. 33.4 million people in the UK labour force and 1.56 million people were classed as unemployed. There are 1.2 million illegal immigrants in the UK. There were 32,733 asylum seekers in 2015 alone and the rich-poor gap widening. Without solving these issues Corbyn and McDonnell wish to give ‘self-determination’ for Tamils in another country. While UK Tamils are around 200,000 there are around 275,000 Jews in the UK. Why is it that Corbyn & Labor are not showing same empathy towards Tamils to Jews in UK?

On 23 November 2019 days after Sri Lanka elected a new president, a video was released by John McDonnel, Labor Party’s Shadow Minister representing Hayes & Harlington constituency which has a population of 303,870 but only 2568 Tamil residents. This is what he had to say obviously reading from a script written in front of him!

Why not give facts with evidence – not third party statements.

We urge that the military are withdrawn”

We urge UK to withdraw military from all of its illegally occupied locations – will UK do so?

We believe that the Tamils have the right to a peaceful political solution, but based upon the recognition of their human rights but also their right to self-determination as well.

Whose demands is the UK Labor party chirping and why?

UK is a sovereign country & so too is Sri Lanka – look after the British and Sri Lanka’s Government will look after Sri Lankans.

both in terms of ensuring that our relationships with Sri Lanka, trading relationship in particular are based upon human rights but also on progress with the implementation of the UN’s Resolution”

Perhaps countries should also start benchmarking funding acceptance depending on the human rights records of the donors!

We believe also that we have a role to ensure that our High Commission monitors human rights particularly with the election of the new President, whose record we have to say, presents us with real concerns and fears for the future”

We believe there has to be a long term political solution”

Political solution for whom is the question

let me make this absolutely clear: the Labor Party will always stand with the Tamil community, both in terms of supporting them here in this country but also supporting them and their families in their homeland”

You mean Tamil Nadu … you may hear from Modi very soon!

We stand with the Tamils”

By all means do… don’t forget to stand with the Brits too – you need to win the Brits vote to come to power – remember that!

Jeremy Corbyn, John McDonnell should take Nick Cohen’s advice Labour would do better if it learned to like the English”.

Looks like McDonnell has a history of links to LTTE fronts:

In 2008 LTTE held its Heroes Day rally at the ExCel Centre London.

Prabakaran delivered what was to become his last ‘live’ speech. In London, the keynote speech was by Vaiko whose visa denial was opposed by the All Party Parliament Group for Tamils in the British Parliament. Other British MPs speaking at event were Edward Davey (LibDem, Kingston and Surbiton), Siobhain McDonagh (Labour, Mitcham and Mordern), John McDonnell (Labour, Hayes and Harlington), Andrew Pelling (Independent, Croydon Central), Joan Ryan (Labour, Enfield North) and Vireindra Sharma (Labour, Ealing and Southall) obviously fishing for Tamil votes. https://tamilnation.org/tamileelam/maveerar/2008/london.htm

This is what McDonnell said in 2010

I opposed the ban on the LTTE and now support the election of the trans national government.”

But in 2019 Corbyn drew wrath from Indian Diaspora for seeking international observers to enter Kashmir and allowing people of Kashmir to seek self-determination!

Labor Leader Jeremy Corbyn first visited Sri Lanka in 1984 and since has been aligned to Tamil separatist sentiments.

Both Corbyn and John McDonnell opened a Tamil War Museum in May 2019. http://www.uktamilnews.com/?p=31370

Corbyn also spoke at the Tamil Genocide Conference in October 2019. https://www.youtube.com/watch?v=-AIiNywEP0I so it comes as no surprise that Labor election manifesto mentions Sri Lanka Tamils but then Corbyn is contesting elections in UK and issues related to Sri Lankan Tamils is for Sri Lanka Govt to resolve – why need to insert foreign issues into an election manifesto relevant to UK tax payers and UK citizens? When Labour is able to collect £1 million in small donations in just 10 days..we don’t need to wonder how!

So why doesn’t Corbyn, McDonnell or Labor feel the same for the 275,000 Jews living in the UK?

Corbyn denied 130 cases of alleged antisemitism by Labor members. However, the archbishop of Canterbury, Justin Welby, in a tweet highlighted the deep sense of insecurity and fear felt by many British Jews”.

While Corbyn/McDonnell and Labor are trying to create self-determination and a Tamil homeland in Sri Lanka, totally out of their gambit, not only the Brits but the Jews living in UK are feeling very insecure and apprehensive about Labour ruling UK.

We may not emigrate in large numbers if Corbyn gets into No 10 – but having our bags packed is how we articulate our anxiety”. A recent poll for Jewish News suggested that 47% of British Jews would seriously consider” leaving the country should Corbyn win. https://www.theguardian.com/commentisfree/2019/nov/26/british-jews-corbyn-emigrate

In 2015, Corby described Hamas and Hezbollah as friends” so is it a surprise Corbyn is pals with LTTE terrorists & their bid for a separate state?

Corbyn has personally been close to a range of individuals and organizations which constitute an extremism and terrorism threat,” said David Toube, director of policy at the counter-extremism Quilliam think-tank.

The Jewish Leadership Council has even written an open letter to Corbyn & Labor Party https://www.thejlc.org/letter_to_jeremy_corbyn

So what is McDonnell blabbering about? Why not listen to this disgruntled Britisher who has no qualms about vocalizing what he thinks about the Labor Party supporters who came canvassing to his door!

Our advice to Corbyn, McDonnell & Labor is just look after the British citizens first & foremost – give to UK Jews the same attention given to UK Tamils…. Let the Sri Lankan Government take care of the Sri Lankan citizens.