Who is responsible for the ‘temporary kidnapping’ of Swiss embassy Colombo local staffer? 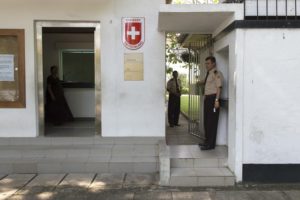 There’s never a dull moment in Sri Lanka. A crucial election is over. An outcome not liked or expected by those that manipulated regime change in 2015. It was expected that the country would witness attacks on multiple fronts aiming at embarrassing the new leader & new government internationally & destabilizing the country. So when the news of a ‘temporary kidnapping’ of a local staffer from the very country that has given safe haven to a controversial police officer who has fled Sri Lanka with his family, we all want the government to get to the bottom of it & find the culprits & expose the truth behind this kidnapping.

We are no investigators but let us view the news of this incident by statements of international press and foreign ministry officials.

Who has been kidnapped:

The Swiss embassy is located in Gregory’s Road behind the D S Senanayake school and virtually opposite the school’s boarding. There is a regular flow of traffic with school white vans parked along the road. How did such an abduction in a ‘white van’ take place?

Given that she was returned around two hours – and with heavy traffic it is impossible that she would have been taken far.

According to NZZ Swiss news media

(but the Swiss Foreign Ministry official said she was only ‘threatened’ how did ‘threatened’ became ‘attacked’.

If he received death threats shouldn’t he have informed his immediate boss in CID and lodged a police complaint – why should he go to a foreign embassy?)

How can anyone seek asylum and fly off to a foreign country so suddenly?

How did he get air ticket (given that he took the flight on a Sunday he would have had to arrange the ticket latest Saturday – which travel agency issued the ticket)/passport/visa (Swiss claims he needs 14 days to process visa)/approvals so quickly and what makes Swiss authority accept his version of the story? Does that mean anyone can claim death threats and Swiss will give prompt visa & help them settle down in Switzerland?

No wonder the State Secretariat for Migration is not responding to questions!

Swiss foreign Ministry in a written statement to swissinfo.ch claims the ‘woman was threatened’ in order to force her to disclose ‘embassy-related information’

Swiss Foreign Ministry did not mention name of Nishantha Silva or his asylum to Switzerland.

(what is this ‘embassy-related information’ they wanted & why did they abduct her ‘temporarily kidnapped’, how did they know what she was handling in the embassy or that it was she who was handling Nishantha Silva’s asylum case)

“detained against her will on the street and threatened at length”

Why? The embassy claimed their employee was ‘temporarily kidnapped’ to get ‘embassy-related information’

From where did NYT hear that investigators were banned from leaving the country?

Really – how many is NYT referring too? Then the entire FCID and other corruption bodies with their staff investigating the Rajapakses would have also fled – did they all get asylum too?

How did she do that – did she have a file on her while going to work?

NYT says the ‘men forced her to unlock her cellphone data, which contained information about Sri Lankans who have recently sought asylum in Switzerland and the names of Sri Lankans who aided them as they fled the country because they feared for their safety after Gotabaya Rajapakse won’.

Are embassy staff allowed to put asylum information on to their mobile phones?

Are embassy staff also having names of Sri Lankans aiding asylum seekers to flee country also on mobile phones. What if they lose the phone?

How does NYT knows that this particular police unit has 704 police staff?

Now that this employee has disclosed her ‘abduction’ what is the fate NYT is implying?

How did an entire family obtain air tickets / visa etc to travel on a Sunday unless it was all pre-planned & pre-booked?

Swiss Foreign Ministry spokesman Pierre-Alain Eltschinger tells NYT that ‘local employee of the embassy was detained against her will on the street and threatened at length by unidentified men in order to force her to disclose embassy-related information’.

NYT contradicts itself because the Swiss Foreign Ministry official never mentioned that the employee was forced to unlock her phone data containing information about Sri Lankans seeking asylum in Switzerland or names of those helping them flee – so why is NYT creating false stories?

How does anyone ‘detain’ a person on the street where lots of people and traffic can be seen?

NYT also cites Prageeth Ekneligoda’s wife who ‘fears for her safety’ and it is a surprise that Swiss authorities have not helped her & her sons to seek asylum in Switzerland. Perhaps everyone claiming to fear living under a Rajapakse government should also be given asylum in Western developed countries of their choice!

‘Switzerland embassy employee was reportedly abducted in a vehicle, detained for two hours and then released’

TamilGuardian makes first mention of the employee being abducted in a vehicle.

TamilGuardian like NYT says the staffer was questioned about Nishantha Silva although the Swiss Foreign Ministry spokesman did not say so.

If the incident took place during broad day light on Monday 25th November, why was it not reported immediately to the Foreign Ministry (or has the adaderana.lk news reported erred in the date given?)

(if K Hettiarachchi is the envoy representing both Germany & Swiss and according to this news he is ‘to meet’ Swiss authorities, how is that swissinfo.ch says Swiss had already summoned Sri Lanka’s envoy to Swiss on 27th November 2019?)

So what was the purpose behind this temporary kidnapping?

From the media articles on the incident we can conclude that what was officially disclosed by the Swiss Foreign Ministry spokesman is way different to what has been written. The Swiss spokesman did not mention about any Nishantha Silva or asylum incident, as been reason for the temporary kidnapping, nor did he say anything about her phone been unlocked and sensitive data being taken. So much of what has been written on the incident has been nothing but salt and pepper added to weave a different version to the story.

Let us wait with anticipation until Sri Lanka’s government comes to the bottom of this ‘temporary kidnapping’ & discloses the culprits whoever they may be.