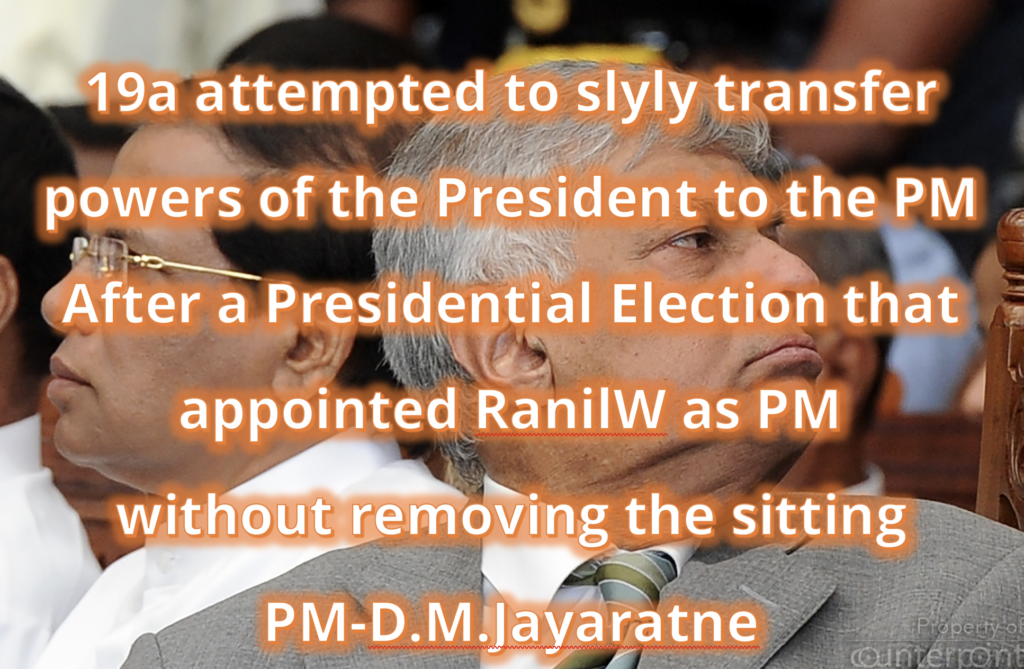 It was clear that 19a was drafted taking into consideration the President in power & the hurriedly appointing Ranil Wickremasinghe who was Opposition Leader as PM without removing the sitting PM (D M Jayaratne) The legality of this remains unanswered. 18 FR petitions were filed in SC. There were amendments to amendments with little time for Counsels to study before making submissions. Though public had a week to study as per Article 121, they did not get access to the latest version. This was a FR violation of the people’s right. Article 122 gives SC 24 to 72hours for Urgent Bills and if Article 121 is applied the Court can take 3 weeks for deliberation & until such time the Bill cannot be taken in Parliament. This was why 19a was rushed through Parliament as an Urgent Bill.

19a is full of confusions & contradictions.

President has to seek opinion of PM to appoint specific Ministers, but

Article 43(3) of 19a allows him to change functions, subjects & composition of the Cabinet without approval of PM – this means the President can keep changing Cabinet Ministers as he likes.

Where conflict can arise: The PM decides who should be Minister but the subjects & functions of these Ministers are decided by the President as well as the Secretaries assigned to the Ministries.

Powers of the  President is curbed by 19a – he remains answerable to Parliament (Section 6 of 19a) in exercising, performing, discharging his duties including public security.

19a does not provide any limitation to the PM’s powers.

Other Confusions & Ambiguities in 19a

Good aspects of 19a

Major fallacies of 19a

Article 80(3) imposes a ban on Supreme Court from reviewing a law after it has been passed and no court or tribunal can inquire into it.

19a was passed no differently to how 13a was passed. 13a had a 9member bench with CJ Sarvananda. 3 judges upheld 13a, 5 judges claimed it contravened Article 2 of the Constitution, Judge Palinda Ranasinghe impugned certain provisions which AG Shiva Pasupathi made amendments to in the Bill & was hastily passed. 13a remains a problem for this reason, the very reason why 19a is full of ambiguities as well.

Article 2 of 19a attempts to replace Article 4(b) of Constitution providing President executive powers including defense. This has to be read alongside Article 33a of 19a which makes President act on advice of PM or a Minister authorized by PM.

Though 19a as per Article 2(b) says executive powers are with the President, in reality it is negated by Article 33a(2) which gives executive powers to the PM & not the President. This is a violation of the legal maxim ‘delegatus non potest delegare’ which in other words means delegated power cannot be re-delegated (thus the President cannot delegate powers given to him to the PM) – ‘shall’ is used as a mandatory requirement for the President in the 19th amendment (Articles 33A (2) and (3) reduces the President to a mere puppet in the hands of the PM and questions the duplicity in including a clause that says the President exercises the People’s power.

Party leaders objected to the clause that required President to act on advice of PM & it was removed from gazette presented to parliament but was included in draft sent to Supreme Court.