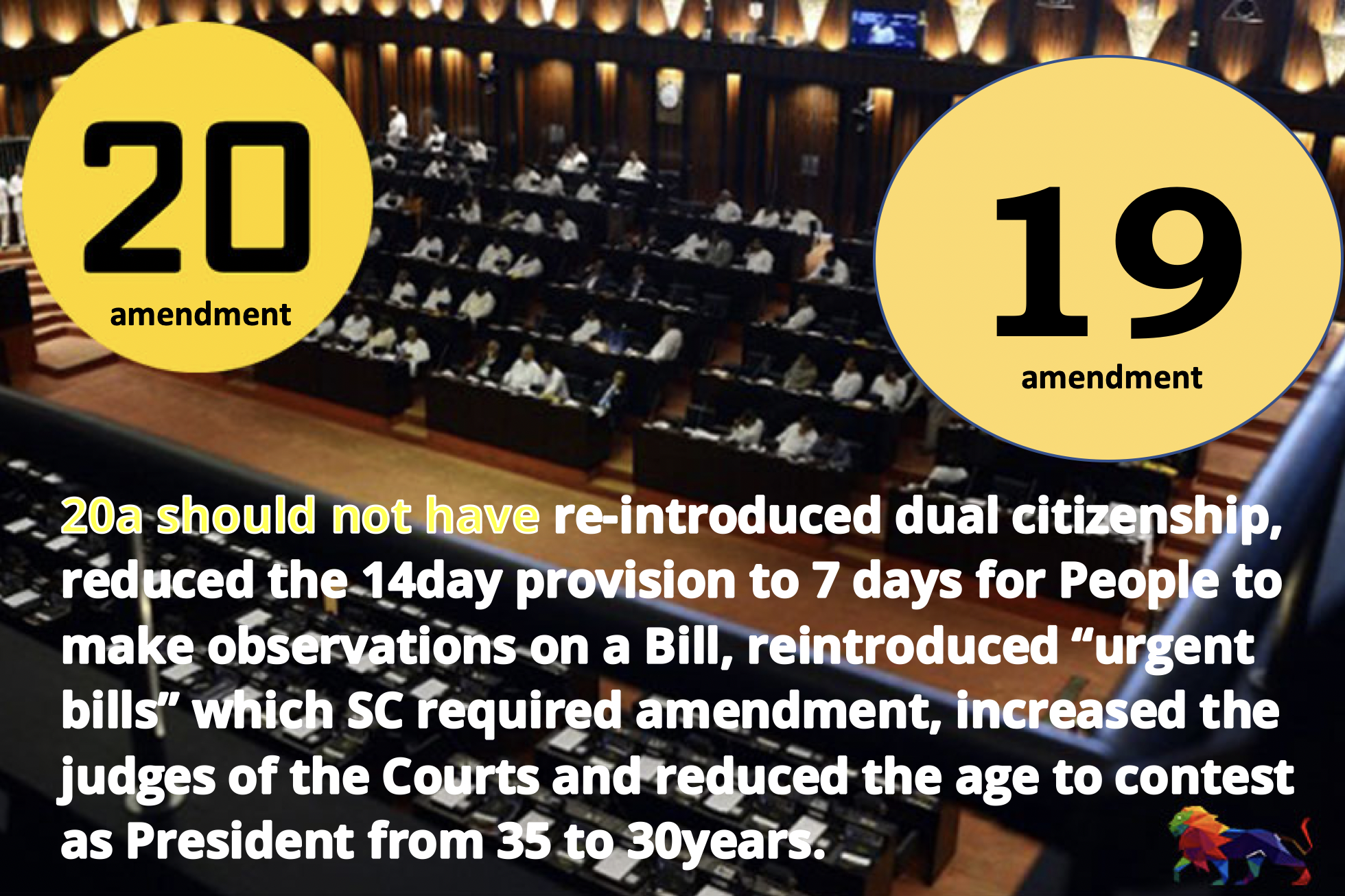 Anything done in haste is wasted and both 19th and 20th amendment as well as 18th amendment were clearly not done with country interest but with personal interest. This is undemocratic and unhealthy for a country & it is reason for so many confusions and contradictions and heated debates. These are all uncalled for and unnecessary. 21st amendment should not fall into this same category. The country is in an economic crisis, it soon led to a political crisis, we do not wish to enter a constitutional crisis as well. Therefore, Parliament & the President must stop being selfish in their tug of war for power and for once put the country first. While 19a is not the perfect amendment as is being made out to be, 20thamendment is not so great either. To understand this, it is important to briefly look at what 19a attempted to do (transfer powers of the President to the PM) while 20a attempted to reverse these changes.

The Parliamentary Elections was won by SLPP in August 2020.

The Presidential election was won by Gotabaya Rajapakse in November 2019.

The President appointed a 5 member committee to draft 20a.

Judges ruled that Clauses 3, 5, 14, 22 of the 20a Bill was inconsistent with Article 3 & 4 of the Constitution & required approval of the People at a referendum (as stipulated by Article 83 unless amended)

The rest could be passed with a 2/3 Majority in Parliament without a referendum.

Clauses requiring referendum unless amended were

Clause 14 – Dissolve Parliament within a year

Clause 22 – Repeal of constitutional duty on public officers to adhere to directive of Election Commission & failure to do so constituting an offense.

20th October 2020 – Supreme Court made its Special Determination after 2 day debate in Parliament.

8 from Opposition voted in favor.

2 term limit of a President,

5 year term for both President & Parliament

Cabinet made 3 changes to 20a Bill

20a – repealed /Dual citizens can contest as President & MP

This was totally uncalled for

19a – President required to act on advice of PM in appointing, removing any Cabinet, Non Cabinet Minister or Deputy Minister

20a – President can hold Ministerial portfolios

20a – “Urgent Bills” provision to pass legislation reintroduced. Amended to only to apply to ‘interest of national security or for purpose of disaster management’ & President can refer Bill to SC for determination on Constitutionality giving SC 24hours to determine. Urgent Bill cannot be used for any Bill as amendment, repeal, replacement, alteration or addition to any provision of the Constitution or repeal and replacement of Constitution.

Duration for a Bill made accessible to Public

19a – 14 days (before placing on Order Paper of Parliament)

Any amendment proposed to a Bill during Committee Stage, cannot deviate from merits & principles of such a Bill. But an Act of Parliament enacted in violation of process is protected by Article 80(3)

19a – Nominations to Courts including SC is by Constitutional Council

Judges of SC increased from 11 to 17 judges.

Judges of Court of Appeal increased from 12 to 20

President may appoint any 2 judges to SC as members of the Judicial Service Commission at his discretion subject to their seniority & judicial experience.

The 20a should not have re-introduced dual citizenship, reduced the 14day provision to 7 days for People to make observations on a Bill, reintroduced “urgent bills” which SC required amendment, increased the judges of the Courts and reduced the age to contest as President from 35 to 30years.