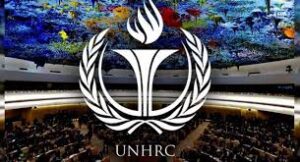 On 11 February 2013 the UNHRC Head Navi Pillay presented A/HRC/22/38 report to the UNHRC. The idea of summarizing these reports is to showcase how Geneva hijacked what claimed to be questioning what happened inside a war zone to include a plethora of non-conflict related issues and scare the GoSL into accepting the lists of ‘changes’ the UN and lobbying countries wanted to force upon Sri Lanka. It also raises the questions if the LLRC were also given a checklist of what to include into their report because the LLRC also speak volumes of non-conflict related items exactly what the UNHRC ordered. The manner UNHRC head picks points from the LLRC based on recommendations makes any to wonder whether it was all a set up!

What is important about the OHCHR Heads report is the question of how she can utilize a personally commissioned report by the UNSG and refer to it against a sovereign country which was to later become the basis and foundation for successive resolutions in Geneva against Sri Lanka.

What has to be reiterated is that this personally commissioned report had no mandate of the UNSC or UNGA and was never tabled in either and the Panel of Expert Report was not even tabled in the UNHRC for Sri Lanka to officially respond to. The Darsuman Report was leaked to the Public. This leaked report is what the UNHRC head is using to quote from.

Extrajudicial killings– OHCHR report says the LLRC could not determine precise circumstances loss of civilian lives occurred but recommended the state investigate action by security forces. LLRC had also recommended independent investigation into allegations of torture & extrajudicial killings arising from video footage broadcast by Channel 4. This was assigned to the Ministry of Defense, Ministry of Justice, AG’s dept and Presidential Secretariat. LLRC also recommended inquiry into civilian injuries and deaths from shelling and examination into inadequacy of medical supplies to civilians in conflict areas. OHCHR head says these recommendations were not included in the national action plan.

OHCHR report also says that the GoSL had appointed a court of inquiry to investigate instances of civilian casualties mentioned in LLRC & to investigate allegations broadcast by Channel 4. The Court of Inquiry had examined 50 witnesses and had investigated more than 50 alleged incidents of shelling as of mid January 2013. OHCHR head says she is concerned about the transparency, independence, impartiality of the process and the protection of witnesses and victims.

LLRC had strongly recommended implementation of recommendations of previous unpublished presidential commission of inquiry which included the 2005 deaths of 5 students in Trincomalee and 17 aid workers of Action contra le faim in Muttur in August 2006.

OHCHR report states that Sri Lanka at the 2ndUPR accepted a recommendation to ‘ensure the adequate completion of investigation into the killings of aid workers’.

OHCHR technical mission had raised concern over delays in the cases, the SL AG responded that the quality of investigations & evidence collected to date had prevented him from proceeding with charges and prosecutions.

Replying to the Special Rapporteur on Extrajudicial, summary or arbitrary executions in October 2012, GoSL had stated that the AG had advised the IGP to conduct investigations. GoSL had said if adequate evidence was disclosed filing indictments was possible.

Missing persons– OHCHR Report says LLRC called for a comprehensive approach to address issue of missing persons and requested implementation of recommendations of previous commissions. OHCHR states the GoSL has yet to establish such mechanism to trace adults gone missing during later stages of the war & investigate disappearances.

OHCHR head claims that missing persons are those whose whereabouts are unknown as a result of armed conflict or internal violence, while enforced disappearances is the deprivation of liberty of a person by the State & concealment of whereabouts of disappeared person.

LLRC has recommended law enforcement authorities to cooperate with relevant bodies like ICRC to trace whereabouts of missing persons. OHCHR says the GoSL had not included this in national action plan though it established a tracing program for missing children. GoSL had recorded 2564 untraceable persons of whom 676 were children and 1888 adults. Tracing requests related to children had been for children recruited by LTTE.

LLRC had recommended creation of a centralized system of data collection on missing persons by different agencies and assigned to the Ministry of Defense in partnership with Dept of Census & Statistics. OHCHR report questions how centralization of data is possible and claims victims’ relatives must have trust & confidence in such a set up.

OHCHR reports says the GoSL stated Registration of Deaths (Temporary Provisions) Act 19 of 2010 envisages issuance of death certificates to next of kin & families of missing to claim monies due to them. The UNSG’s Panel of Experts in its report states “issuance of a death certificate following an administrative process is not a substitute for a bona fide investigation into the circumstances of an individual’s death which meets international standards. It is also crucial to ensure that a relative acceptance of a death certificate does not lock the individual into a definitive legal position that precludes any further legal recourse in the future”

Enforced Disappearances– OHCHR claims LLRC recommended a special commissioner of investigation be appointed & supported by experienced investigators to investigate alleged disappearances & provide AG material for further action. GoSL had incorporated this into national action plan but did not commit to establishing a new mechanism & instead relied on existing system provided in Code of Criminal Procedure, OHCHR head reports.

OHCHR Head claims that as of November 2012, the Working Group on Enforced or Involuntary Disappearances had 5676 cases of enforced or involuntary disappearance in Sri Lanka outstanding. At the UPF, GoSL stated that more than 4000 of these cases were related to pre-1990 period and 1089 cases belonged to 1991 and 2005 period.

LLRC recommended a full investigation with prosecutions where necessary for cases of alleged disappearances of those who had surrendered to and/or been arrested by the security forces during the end of armed conflict. The GoSL in its national action plan instructed Ministry of Defense to complete ongoing disciplinary process and Ministry of Justice & AG’s dept to take follow up action to prosecute.

LLRC had recommended law enforcement agencies to strictly adhere to existing legal provisions when arresting and detention. LLRC called to designate all places of detention and provide access to next of kin to see detainees. OHCHR head states in her report that the GoSL had not included these in the national action plan.

LLRC had recommended an independent advisory committee to monitor and examine arrest & detention of persons taken into custody (vis a vis Public security ordinance or PTA). GoSL had given this responsibility to the Ministry of Public Administration & Home Affairs.

OHCHR report states that the LLRC had recommended a centralized database for detainees with access to next of kin. this was assigned to the Ministry of Defense under the National Action Plan. GoSL stated that this database is with the Terrorist Investigation Division of the Police and 3073 next of kin had made inquiries. OHCHR head states that this does not address families of those whose members went missing during last stages of war or surrendered to the army and disappeared thereafter.

OHCHR Report states that some detainees at Boossa Detention Centre had spent lng periods of detention without charges filed against them, the Commission in its report reiterated its interim recommendation that ‘a special mechanism be created to examine such cases on a case by case basis & recommend a course of action in regard to disposal of each case, as appropriate’. GoSL’s national action plan called the AGs dept to identify and estabalish procedure within existing system to address issue and complete decision-making regarding detainees. In Jan 2011, a 4member special committee by AG’s dept was set up to study cases of LTTE suspects in detention & expedite release for rehabilitation or expedite investigations to hardcore LTTE members.

At the UPR, GOSL stated that as at 22 October 2012, 11012 people including 594 LTTE child soldiers had been rehabilitated & reintegrated into society and that only 782 were undergoing rehabilitation while 262 were under judicially mandated remand custody.

On 23 May 2012, the Leader of the House in Parliament stated that 4 special courts to hear cases against LTTE were to be established but as of end of 2012 the courts were not functioning.

OHCHR Head’s report found fault with Sri Lanka’s post-rehabilitation monitoring of LTTE combatants citing that asking them to report to nearest police, army camp or having intel visit their homes was a ‘harassment’ and a social ‘stigma’ especially for women LTTE.

LLRC noted that returning of displaced during final stages of armed conflict had been almost complete, there were concerns regarding the needs of those resettled.

OHCHR reports states that in 2011 October the GoSL had committed to a national policy on displacement within 6 months but no comprehensive national policy had been drafted or adopted.

OHCHR report states there is no official figures on IDPs and no comprehensive profiling of displaced persons since 2007. At end of 2012 UNHCR sourced GoSL data revealed approximately 483,300 individuals had turned to their area of origin while about 94,000 remain displaced.

Those displaced after April 2008 & housed at Menik Farm (approximately 271,200) returned to areas of origin while estimated 18,000 continued to live with host families or in welfare camps, transit situations or on relocation sites.

LLRC had recommended that assistance be provided to returnees to enable them to repair and build permanent houses – basic infrastructure needs, adequate roads, schools, hospitals but OHCHR report says these were not incorporated into national action plan.

LLRC had recommended investigation of attacks on journalists and media institutions & to impose deterrent punishment – the national action plan was to investigate current cases by police with Ministry of Mass Media & Information to ensure media freedom.

5 July 2012 failed attempt to abduct a journalist by two men in white van.

LLRC had also recommended to reduce military involvement in civilian matters which was assigned in national plan of action to the Ministry of Defense. OHCHR report states that several important civilian functions were brought under purview of Ministry of Defnse (NGO Secretariat & UDA in 2010)

OHCHR report cites that the military continues to occupy land formerly occupied by civilians – Mullikulam in Mannar, Keppapulavu in Mullaitivu.

LLRC had also promoted reconciliation in consultation with interfaith groups to prevent future conflict resulting from communal or religious tensions.

LLRC recommended the implementation of 13a

LLRC on reparations – says those eligible should have access within a reasonable time.

OHCHR report also highlights need to have a memorial for civilian dead in the war.

OHCHR head say she wished to see ‘meaningful progress’ before her visit in 2013.

OHCHR report claims that to achieve reconciliation is only possible through a “genuine, consultative & inclusive process that addresses grievances of all those affected by the conflict”

OHCHR head says that LLRC had made ‘significant and far-reaching recommendations for reconciliation & strengthening the rule of law”.

OHCHR head says GoSL has only committed to some LLRC recommendations and has not engaged civil society to support process.

OHCHR head says the steps by GoSL  to investigate ‘allegations of serious violations of human rights are inconclusive, lack independence and impartiality’