Sri Lanka has undergone 3 phases of mass killings against unarmed civilians. These were no individual incidents or spur of the moment killings. These were all premeditated murder. Colonial crimes in then, Sinhale covers the period from 1505 to 1948. All developing nations were subject to mass genocide, plunder by the very countries relentlessly preaching about human rights completely ignoring their violations of it for 500 years. The next period of gruesome murder came with 2 JVP insurrections in 1970s and 1980s. The people must know how JVP roasted people on tyres or tied them to lampposts naked. The third phase of mass pre-meditated murder came with the LTTE killings that initially started by killing Tamils and then went on to kill innocent villagers and thereafter to a brutal attack using sophisticated weaponry supported by the LTTE diaspora. The Armed Forces of Sri Lanka defeated the ground force of the LTTE in May 2009, yet the LTTE diaspora that provided material support continues their bogus campaigns. Interestingly, they are located & operating from the very countries that committed mass colonial crimes. When they fund lies demanding truth, we must present the truth and expose their lies – the War Crimes Museum is showcase to the world their crimes. This is crucial as Sri Lanka is never given any empathy in the international arena which the countries that committed mass crimes since 1505 control. Therefore, we must have a national initiative to absolve us of false allegations and the War Crime Museum will enable Sri Lanka to set the story straight. Sri Lanka must obtain assistance from the countries that played no role in either of these 3 murderous phases of our past.

Colonial crimes by West are so heinous that none of the crimes taking place today come anywhere near what these colonial invaders committed. Infecting natives with disease (small pox), throwing native babies to crocodiles, pounding people to death, killing elephants even pregnant elephants for sport, enjoying breakfast while watching natives being hung, burning down entire villages, killing livestock with intent to make natives die of hunger are just a handful of gruesome crimes committed by the White Man today presenting himself in international halls as the crusaders and angels of peace and human rights.

Their 24×7 jargon of human rights, democracy, freedoms, transparency, justice and what not did not exist across 500 years of their rule taking over nations already inhabited and declaring it theirs claiming to having ‘discovered’ them. The Papal Bulls giving this right exist to this day.

Ironically, these very countries refuse to put their crimes to the dock and will not atone for a single murder committed under orders of their King/Queen/Church.

The manner these countries use the UN to accuse countries they ruined with their divide and rule policies is unbelievable. The manner they control media and global publicity necessitates that the third world correct the factually incorrect history being created as future generations will not know what took place.

These are the very countries preaching about Acknowledgement & Accountability. Sri Lanka must make the 3 countries Portuguese, Dutch & British that occupied Sri Lanka, acknowledge their crimes and account for their crimes. The cultural genocidein all colonies must also be accounted for. 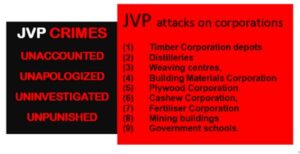 Two insurrections took place by the JVP starting in the 1970s and then again in 1980s. How the JVP started, who were behind its creation, why and for what reason is important and will answer to the present political role they play. Obviously, they have an external influence with funding and instructions coming and modus operandi also decided. The key point to take note was that the JVP has been used to divide & destroy the Sinhala Buddhists. Brainwashing youth in universities, the JVP movement aimed at ensuring cream of Sinhala Buddhists diverted from making a name for themselves using their education/talents and instead put them on the roads to protest. This game plan continues to this day. The insurrections resulted in the loss of lives of thousands of Sinhala Buddhist talented youth who would have been good leaders had they not been brainwashed to rebel. Thus, whoever funded JVP ensured that Sinhala Buddhists got killed by Sinhala Buddhists when the JVP attacked the Armed Forces and their families.

This period for Sinhalese in particular was one of fear. A man on a bicycle throwing a piece of paper was enough to put an entire town in darkness. The chit carried a threat that any house with lights on would be torched and occupants killed. This was a period Sinhalese families lived in fear for the safety of their children. No one knew who came to houses and took away youth, never to return. People will remember the streets smelling of burnt tyres with an unknown person burning on it. People will remember men naked tied to lampposts. The people must know how many Buddhist clergy were killed, how many buses and trains were torched, how many professionals were killed by the JVP and even gangs under patronage of the ruling government. These were all premeditated acts of murder and the lists of people killed during this period is available and JVP crimes must be made available in a Museum for the present and future generations to see. Today, the JVP is pretending to be a chameleon, changing colours by presenting itself in different names to fool the masses but JVP has yet to come clean on its crimes and this needs to be presented to the people and the world to know what the innocent citizens went through during this gruesome period post-independence.

The third phase of brutal murder came after the unknown Tamil New Tigers formed in 1972 by Prabakaran rechristened itself LTTE in 1976 and hijacked the separatist quest from the Tamil leaders who indirectly played a role thinking they could take over the mantle after LTTE was able to declare a separate state with the gun. Unfortunately, LTTE’s leader had other plans and the cream of the Tamil leadership was slowly eliminated by him leaving weasels willing to tow his line and TNA was happy to play lead role as LTTE’s political party. 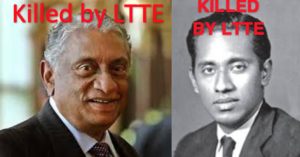 It is important for the world to know who supported Tamil political quest for separatism and whether the same entities supported the LTTE terror quest too. LTTE began killing Tamil leaders first, then Tamil public servants like Tamil policemen and thereafter only did LTTE turn its guns on the Sri Lanka Armed Forces. The first attack by LTTE on villagers were with the brutal attacks on the Kent & Dollar Farms cutting pregnant mothers and infants to pieces. Thereafter, for 3 decades over 300 LTTE attacks took place virtually every day, every month, every year.

The country only heard ambulances screeching past carrying almost dead casualties to hospitals. Parents fearfully said goodbyes to their children leaving for schools or husbands going to work. No one knew whether they would return. 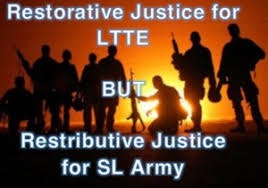 Today, the UN is demanding to know how LTTE was killed pretending they want to know how ‘civilians’ were killed, but what did this UN or UNHRC do about LTTE killings since 1980s?

All that the diplomats and the UN did was to issue a lukewarm statement and ask the GoSL to have tea with the tigers!

Today, the same UN/UNHRC is passing resolutions chanting accountability, truth, justice but where were they when real civilians were being targeted as an act of premeditated murder by LTTE.

The last phase took place inside a war zone where areas were demarcated for civilians. But who were the civilians because LTTE had its own civilian armed force trained to kill and were just as brutal as their uniformed force.

But, when LTTE attacked passenger buses, trains, public places etc they planned to kill, they planned in advance – why did the UN/UNHRC not give due attention to these murders. Have they even documented the LTTE attacks upon real civilians since 1980s?

Today, the hilarious factor is that the LTTE Diaspora, the very entity that provided LTTE material support throughout LTTE’s murderous past is dictating to the UN & Diplomats how GoSL should be punished for eliminating LTTE. They are all making the mockery of the truth.

It is for this reason that Sri Lanka must have a War Crimes Museum and put every murder committed by LTTE for the world to see for themselves because the future generations are unlikely to know any truth reading reports by UN/UNHRC to what took place in Sri Lanka.

Therefore, this Government owes the victims justice by erecting a War Crimes Museum and documenting every victim killed by LTTE since 1980s.

At the same time, alongside the War Crimes Museum there should also be a Peace & Unity Hall to present to the world how our people lived in peace and unity before 1505 and how that peace & unity was destroyed by colonial invaders via their divide and rule policies.

History will be witness to showcase not a single incident where Tamils or Muslims faced wrath under the Sinhale kings before 1505.

The Peace & Unity Hall must highlight all of the happy ventures that the communities in Sri Lanka indulge in. As per the UN/UNHRC & diplomatic reports, anyone who has not been to Sri Lanka will think the communities are daily killing each other. This is totally untrue and a fabrication.

Go to any public or private workplace and see how people work in unity. The people share food, go to parties, go shopping and have fun together. As humans, everyone has differences, but differences do not mean communities are 24×7 at loggerheads. Most of the incidents that have taken place have some form of external interference and hanky panky.  Therefore, we must have a Peace & Unity corner to highlight how ordinary people live together peacefully. The best example of this is how everyone unites each time there is a natural calamity and everyone chips in to help others.

The GoSL must allocate land for this War Crimes/Peace Museum and talented architects and IT experts must come forward to propose how this can be set up – we can have video versions, digital 3D/4D, documents/articles archived, erections of key attacks by LTTE, lists of people killed/assassinated y LTTE. The objective is for people who had thus far digested the lies of LTTE propaganda to see the real version and to know the truth.

This national initiative must absolve us of false allegations and the War Crime Museum will enable Sri Lanka to set the story straight. 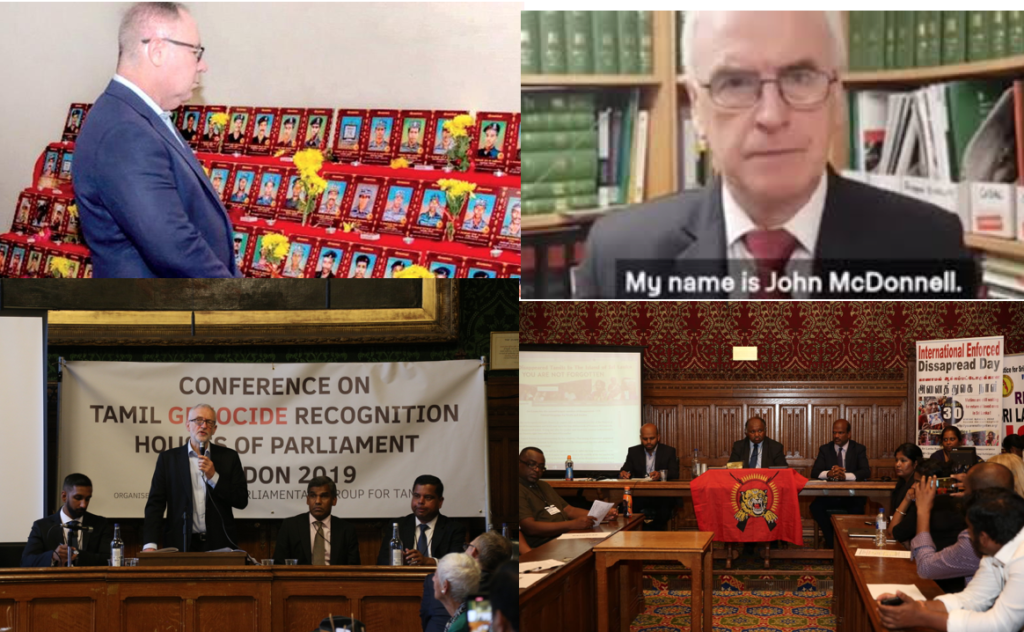 We should not delay this any further. When LTTE Diaspora are going to the extent of funding foreign MPs and UN Officials to parrot their lies, Sri Lanka must respond by showcasing to the world the truth via actual incidents that took place.

Similarly, the countries pointing fingers at Sri Lanka will also have to respond to the colonial crimes committed as a government rule/orders, while JVP pretending to be angels must also be made to account for their mass murder of innocent people. Inadvertently, the ruling party of that period will also have to face the tune for their crimes as well.

Every period that mass crimes has taken place must be covered and such mass crimes and murder took place only during colonial occupation, 2 JVP insurrections and 3 decades of LTTE terror.

If funding is an issue, GoSL must reach out to countries that helped Sri Lanka end LTTE & who played no role in funding LTTE, for support.

http://www.downtheroad.org/Asia/Photo/3Vietnam_Pictures/3War_Remnants_Museum.htm (please view this to see the extent of crimes committed by human rights crusader America!)