Allegations of Corruptions : Rajapakse’s must respond 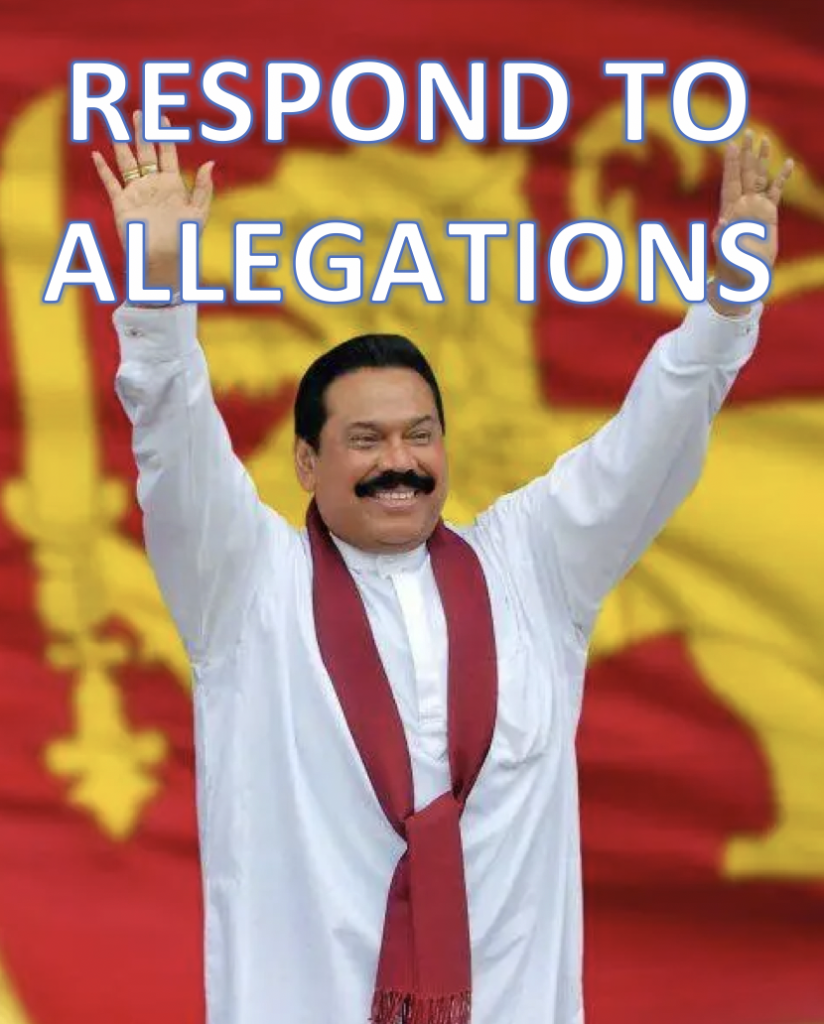 Ever since Mahinda Rajapakse came into political limelight he has been targeted. Perhaps the targeting and name calling became a primary reason for the majority populace to back him. He did not come from the Colombo elite coterie though from a well-known southern family. Yet, the elitist circles still regarded him an outcast of Colombo political society. Be that as it may, having been a shadow of Mrs. B, to a shadow of her daughter Chandrika, Mahinda Rajapakse was rebranded as the Mr. Coka Cola of Sinhala politics by none other than Mangala Samaraweera who led his campaign and made him president in 2005. Over the years, his stature has arisen & his unfortunate downfall has surrounded a plethora of accusations and allegations to which he and his family deserve an explanation to his supporters and legal action against anyone if these allegations are false.

Mahinda Rajapakse received the wrath of the West and all those who molly-coddled the LTTE & naturally those that lived off the LTTE business model were angry enough to seek revenge.

JVP would have also wanted revenge for breaking them up. Many other political oppositions must also be equally angry with him. His dynamic personality remains at the forefront of his charisma. Even Maithripala Sirisena who secretly exited to become President, wanted to reverse and make amends with Mahinda Rajapakse which led to reappointing Mahinda as PM and the 52day program. Similarly, all of his opponents continue to have the greatest of respect for him and many an opposition MP regard him as their political role model.

Nevertheless, the wrath that he faced is far more than seeking political revenge for political maneuverings. It has far more than well-funded election campaigns, it has far more to do with people’s angst at his spouse or his children and their extended families, or his brothers and their children who have entered parliament from the vote with exception of one. It is issues related to them that end up falling on Mahinda Rajapakse’s lap.

Every campaign has been playing the same record of corruptions at every election. These campaigns have only increased in tempo and included more and more allegations. It has come to such a level that there are people actually thinking that the economic crisis is because the country’s dollars & rupees have been taken by the Rajapakses.

However, far-fetched this notion may be, there are even educated people believing this.

It therefore, behooves the Rajapakse family to take each & every allegation and respond to them and not stopping there, take legal action against those who are cooking up stories, if these are cooked up stories. If not, then an apology is long overdue.

Be that as it may, the patriarch of the Rajapakse dynasty remains Mahinda Rajapakse and he remains the most successful President in Sri Lanka under whose rule a 30 year terrorist movement was eliminated and under whose tenure development took place and under whose rule inspite of loans taken there was GDP positive growth including foreign reserves. No President has been able to match these achievements so far. It is why politicians of all colours and a majority of citizens still acknowledge his achievements whatever else clouds it. He remains Sri Lanka’s most charismatic leader, amiable with all citizens sans ethnicity, religion or any other denomination. No politician has been able to match his political acumen or his amiable character.

Therefore, before he closes his eyes, the rest of his family deserve to ensure his tarnished name is cleared and to set about doing this is to take up the major allegations and not simply deny, question them and counter with facts and evidence & even take legal action.

People are not bothered how the allegations are met, all they want is for the Rajapakses to respond to them.