There are very valid reasons why Sri Lankan patriots are backing its National Army being falsely accused of war crimes by individuals & organizations that have been party to Syria’s false flag incidents & countless other falsehoods that were used to justify military interventions, UN tribunals, UN presence, US-NATO presence, UN resolutions all with the objective of weakening a state and enabling neocolonial rule & plunder of nations by a handful of people & their organizations. They say truth will win in the end one day & a truth has dropped out of the blue by BBC producer Riam Dalati – “After almost 6 months of investigations, I can prove without a doubt that the Douma Hospital scene was staged. No fatalities occurred in the hospital”.  All that the BBC his employer said was “it is his personal opinion”.

The BBC producers’ revelation is not only stunning it completely shatters the credibility of every media/foreign government, human rights organizations that carried the news of the chemical attack on the city of Duma accusing the Syrian Govt and justifying why the West should once again militarily invade a nation.

According to the BBC producer there was no fatalities at the hospital and no sarin had been used. Which means everything promoted by the media & referred to by western govts was fake & fabricated.

The video claiming the sarin attack was published by the NGO White Helmets in early April 2018. The White Helmet video showed men, women & children being treated after the alleged attack. 9/11 resulted in accusing Afghanistan & US/NATO bombing Afghanistan and continuing to occupy the country since 2001 (18 years). Thus, without establishing that a sarin attack took place US, UK & France carried out missile strikes on Syria.

BBC producer Ria Dalati is not the only reporter to claim the sarin falsehood. British reporter Robert Fisk too insists there was no gas attack at all. 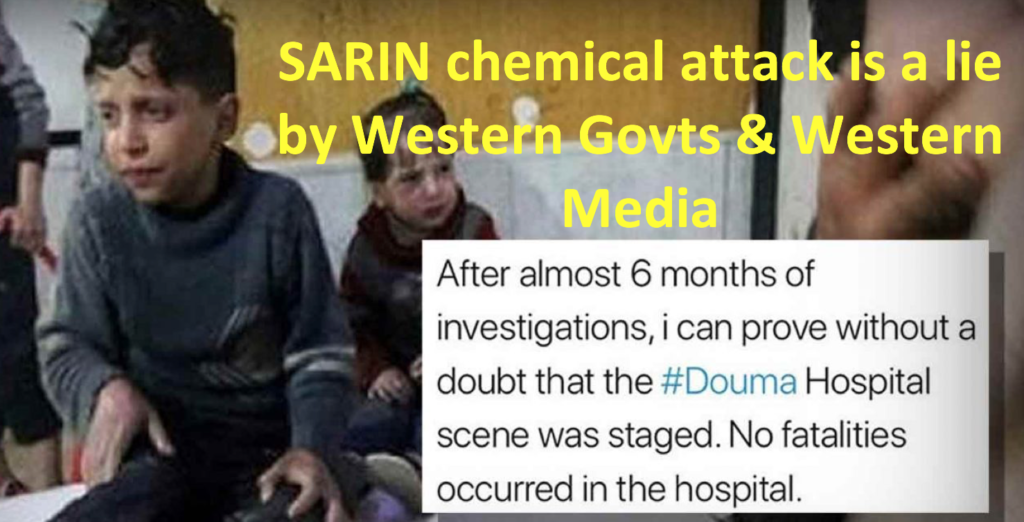 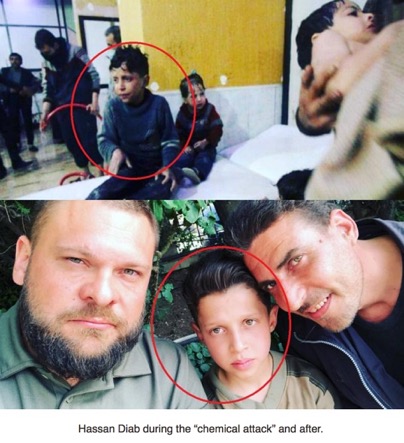 In April 2018 SPUTNIK news highlighted the story of Hasan Diab who had been videoed by White Helmets. The story surrounds the alleged chemical weapons attack in Duma.

However, the 11year old Diab says someone at poured water at him and put him on a bed and began shooting and thereafter was given sweets & rice for participating.

While the Duma chemical attack is false and the very countries aware of this however goes & attacks Syria – US, UK & France alleging that Syria had attacked the hospital carried out a missile attack on targets in Syria (103 cruise missiles)

BBC’s C4 produced 3 documentaries in 2011, 2012 & 2013 claiming to provide evidence of war crimes committed by Sri Lankan Armed Forces. However, what C4 omits to mention is that LTTE used civilians and civilian infrastructure like hospitals & schools to operate their heavy machinery from which they fired at the armed forces. The videos were full of manipulated footage – upside-down editing, sequences reversed, LTTE dressed in army uniforms, distorting voices and creating shadow faces of people who were never witnesses. The C4 video director Callum Macrae not surprisingly is among a team of anti-Sri Lankan crusaders. Macrae & Yasmin Sooka are in the Advisory Council of the Sri Lanka Campaign for Peace and Justice. Macrae is one of the 4 Board Members. In 2014 the SLCPJ produced a report which was endorsed by international criminal law and human rights law scholar Professor William Schabas who was also interviewed by Macrae in C4 videos. At the 3rd anniversary of GTF (named as a LTTE front by GOSL in 2014) Macrae was a guest speaker alongside Frances Harrison, former UN spokesman Gordon Weiss – the rest of the colourful guest list can be viewed here – http://www.ticonline.org/newsdetails.php?id=53 Callum Macrae was also a panelist in 2013 organized by BTF another LTTE front declared by GOSL in 2014.

BBC also carried Frances Harrison’s “Tamils still being raped & tortured in Sri Lanka” where 12 persons including former LTTE combatants are identified as ‘victims of torture & rape’ anyone can be screen making allegations – where is the proof. It is an open secret that there are centres in the UK that charges Tamils to be burnt with cigarette butt ends & thereafter a doctor confirms these are recent acts of torture & then another set of people train Tamils on how to answer immigration authorities and this entire training costs some 5000-6000 sterling pounds just to gain asylum! It’s a racket wherein Tamils & British are also involved & something the British authorities should investigate further.

Quite a lot of lies has taken by the same individuals & groups justifying our caution to believe their versions.

Gen. Colin Powell lied to the UN Security Council in 2003 holding vial of anthrax – WMD was used to invade Iraq. Charles Jaco – CNN reporter pretended to use gas masks amid blazing sirens in Iraq but the entire scene was shot in a US studio. Who remembers Nayirah’s performance which was part of a $12m package to a US PR firm that coached her to cry before US Congress & manufacture a story about Iraqi troops killing babies in incubators.

Not stopping there the lies and falsehoods to breakup Yugoslavia and demonize Serbia were many. Media & Western government spread fabricated concentration camps,” rape camps,” and similar Nazi- and Auschwitz-like analogies across media completely fooling the people. Serbian Concentration Camp fabrication – https://www.youtube.com/watch?v=4xss0Ep1MJM (remember the concentration camp/internment camp stories that were making the rounds against Sri Lanka) In 2001 Danny Abdul Dayem was used to justify invasion of Syria. Danny turned out to be a British citizen & one of the rainbow boys paid to kick start the Syrian colour ‘revolution’. His ‘reports’ were used to build anti-Assad sentiment by BBC, CNN & Al Jazeera.

Omran was used by White Helmets & western governments to highlight the ‘brutality’ of Syrian Government.

Who remembers the footage of a Syrian boy rescuing a little girl amidst gunfire? Well that too was staged by a Norwegian team filming in Malta & not Syria – https://www.youtube.com/watch?v=Tjb4XgjuP4A

How about the picture of a little boy lying beside his dead parents posted across FB & twitter – that too was part of an art project by photographer Abdul Aziz al Otaibi & shot in Saudi Arabia & not in Syria.

We cannot stop Western governments following neocolonial imperial policies together with their bosom pals the western media, UN, human rights organizations from making many more fabricated footage, fake news & false flags to justify their plans by fooling the people of the world, however the people should now be a bit more intelligent & start realizing the lies that they have been fed by putting together the lies and distortions that have taken place over the years and link the people who are involved too. They are all in the same family of liars & paid handsomely to fool the world & live off the agony & pain of people whose lives have been ruined by these lies & fake footage.

There is little point saying these people should feel ashamed of their lies – how can they feel ashamed when they have no conscience or morals.