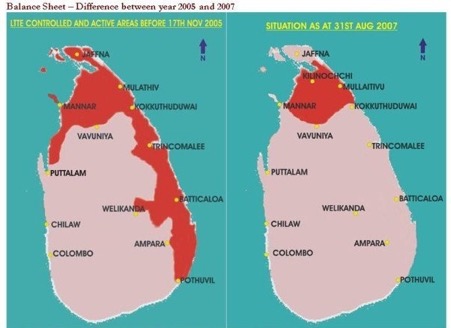 It is more than clear that the Eelam project has been not simply a Tamil project but one that has been used by not just one foreign government for their own geopolitical agendas. That explains the duration of LTTE reign & it also explains the players coming forward as conflict-resolutionists and reading into some of the solutions offered it also gives a better picture that all of the solutions had nothing to do about Tamil people getting their own administration but a demarcation of land & boundaries that would serve the interest of external agendas. For this purpose the map of Eelam is crucial & important. This is the map of Tamil Eelam depicted by the Transnational Government of Tamil Eelam a LTTE front banned under UNSC Resolution 1373 since April 2014. Don’t you wonder why not a single foreign envoy, not a single UN official, not a single human rights activists or lawyer objects to the TNA & others demanding NO SINHALESE can live or work in the North?

How many statements have been issued by the TNA & Its chief minister demanding the removal of Buddhist sites, archaeological sites being destroyed & demanding Sinhalese are not allowed in the North.

Not a single UN official are even helping the displaced Sinhalese to resettle in the North.

The other important factor is the manner TNA want to shift the Provincial Council office exactly to the border of this line clearly demarcating the importance of the division.

Who are the foreign hands manipulating LTTE

Not just one foreign player has been involved with LTTE. All 15 LTTE fronts banned since 2014 are operating from US, Canada, UK, EU nations, India. None of these countries have launched investigation into their role in materially supporting LTTE inspite of LTTE being banned in their countries.

Norways’ role in Sri Lanka’s conflict is also noteworthy. Karuna Amman has even accused Norway of providing funding to LTTE to purchase lethal weapons. Norway is also associated with handing over high-tech satellite equipment to LTTE during the same period. All this doesn’t shine much light on Norway’s credibility as a genuine peace negotiator or facilitator.

Daya Gamage’s book Tamil Tigers’ Debt to America: US Foreign Policy Adventurism & Sri Lanka’s Dilemma” shows that US treated LTTE eelam & Tamil eelam quest as one and the same. This is clearly indicative of the UNHRC resolutions virtually insisting on war crimes against only the Sri Lankan Armed Forces. Both former US envoy Blake & EU Head of Mission Savage made virtual threats of sanctions, war crimes tribunals even before a complete military end to LTTE occurred.

US inspite of its hyped war on terror has done nothing against the TGTE or its head openly displaying the LTTE flag alongside the US national flag too. MPs in all of these LTTE banned countries not only appear as guests of LTTE front events but even deliver speeches and no investigation is even launched against them. Some have even travelled to Sri Lanka sponsored by these LTTE fronts. Some foreign MPs have even signed petitions generated by these LTTE fronts.

Why would countries allow their leaders to openly promote & assist an internationally banned terrorist movement to prevail. This is no different to the West’s support of the KLA that now runs independent Kosovo, it is no different to many other regime changed countries where the mantle of governance have been given to puppets controlled by the West who allow the West to use the separated territory for West’s geopolitical mechanisms.

Is it possible that Sri Lanka’s Eelam quest is one such project now involved in a tug-of-war between nations who know the importance of Sri Lanka’s geopolitical positioning. Is this why the West have used India as a front to push forward West’s design for its pivot to Asia strategies. India hopefully realizes the faux pas it has made in making Asia vulnerable by warmly welcoming the enemy to Asia’s doorstep thereby making entire South Asian region vulnerable. West have used India’s anti-China card to take India to its side thereby forcing India’s silence at the inroads the West is now making in Sri Lanka with India now in little control to stop it other than taking another detrimental route like creating another rebel force to counter the situation. Is the making of AAVA the alternate ploy?

Be that as it may, having digested the extent of this illegal eelam map with no valid reasons to demand any territory claiming to be any homeland of Tamils, we next come to the real problem at stake.

Now that you have a clear picture of the eelam map where it commences & what areas it covers, please take a look at this map. This map is available on forever maps (one of the largest satellite maps) & is used by the UN clearly depicting their objective. Where did forever maps get this map … obviously it has to be from a valid source – US or UN?

The line is identical to the TNA poster shown above demanding no Sinhalese in the North.

The line starts South from Mannar and goes North of Trincomalee in Eastern Province.

What is also crucial to note is that this line was not seen before 2016. This line appears only after 2016 wherein a new constitution for Sri Lanka removing the unitary status, incorporating the ITAK confederal objectives is slowly & subtly being drafted by foreign experts & making it appear to look as if it is drafted by various steering committees appointed by locals. Locals are only going through the various internal loopholes & placing their treacherous advice for the dollars & pounds being paid to them as gratitude for their treachery.

The inclusion of the line aligns to the regime change & every measure the West is taking to choke Sri Lanka’s sovereignty & create another Kosovo/ South Sudan out of Sri Lanka presenting it as a change the people asked for.

Notice how the northern towns are depicted in Tamil?

Again it is highlighting the exact boundary that demands no Sinhalese can enter.

Now can you understand the reason for the jihadi element in Wilpattu and the manner the area is getting cleared on the pretext of settling people? We all know that West partners with jihadists in Asia for their geopolitical purposes. The people now living in these areas do not even look like our traditionally dressed Muslims, so who exactly are they & where have they come from & who are allowing them into the country without monitoring them? They are helping to create the necessary boundary. Minorities need to ask pose some fundamental questions to themselves & answer irrespective of their like or dislike of the Sinhalese.

The West declared Gaddafi a dictator & claimed to want to liberate the Libyan people & also give them freedom & rights. Gaddafi was killed in the most unimagineable manner & the West only laughed but are the Libyans free in their country?

Kosovo was created & Serbian leader was also mysteriously put out of the way but are the Kosovars truly enjoying independence & life?

South Sudan was also given independence, Sudan was divided & everyone said by dividing Sudan & giving independence to South Sudan everything would be honky dory. Is South Sudan at peace today? There are enough and more countries that the US, UK & NATO with the help of UN has brought freedom & liberty to but are all of these countries examples of a success story or are they worse off than they were under the supposed dictators?

So do Tamils really think that all this attention the US, UK, Canada, EU & UN are giving to Sri Lanka’s supposed post-conflict development is really with the interest of the Tamils at heart? The same can be said of the interest India claims to place about Tamils, the genuineness of that can be assuaged by the level of poverty, abuses against low castes & Dalits & other human rights violations in Tamil Nadu state. Tamils may also like to question the sincerity of the LTTE diaspora & other eelam lobbyists. All of them are holding foreign passports. They wish to come to Sri Lanka only as holiday goers. Their investments if at all will only be to secure profit for themselves & have nothing related to uplifting the lives of Tamils in a separate Tamil autonomous & independent state. But, such a promise & assurance that has historical weight since the self-determination bid started in Tamil Nadu, gains the emotional backing of the Tamil people and the West are masters at playing psychological games with people’s emotions. They have done plenty of research using Asian, African & Indigenous people as experiments so they are well aware of what ticks in the minds of minorities & they use these as political ploys to advance their geopolitical neo-liberal corporate policies.

Unless and until minorities are able to understand this and the majority too are able to read between the lines of these games that are being played politically, diplomatically even using international trade, UN conventions & resolutions as ploy we will never know who our real enemies.

These maps should give a clear indication that the West has been silently backing an armed militancy to later advance to backing its political proxy with their own intent to administer the new demarcated area by giving limited ‘sovereignty’ to a new area they will declare as eelam. With no standing army & little political weight newly created micro states or their leaders are no match for the powerful countries that will dictate what they should hand over to them & how they should run the people. Eventually it will end up an inguru dee miris gaththawage story.