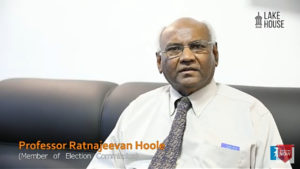 LTTE declared him anti-Tamil and anti-Hindu…. Sri Lankan’s question him on his bias and lack of integrity. What can we comprehend of his actions? Let’s go back a bit to understand. Amnesty International on 12 April 2006 issued a release regarding Ratnajeevan Hoole. It was issued immediately after his appointment as Vice Chancellor of Jaffna University and following repeated death threats by LTTE claiming to return his body ‘headless in a box’ if he takes up position as Vice Chancellor. The Jaffna Students Union put posters calling him ‘anti-Tami, anti-Hindu and not ‘loyal to the Tamil people’. In fact, LTTE websites ran articles on Hoole titled ‘Who is this Fool’. This speaks volumes about his actions thereafter!

Let us first look at what the Amnesty document is trying to convey.

Amnesty declares they ‘fear for safety’ of Hoole & his family not by Sinhalese but by the LTTE after his appointment as Vice Chancellor, Jaffna University. Who was threatening Hoole? A front organization of the LTTE called People’s Uprising Force (Makkal Eluchip Padai) presumably had telephoned Hoole on 11 March 2006 warning him not to enter Jaffna university or return ‘headless in a box’. On 12 March 2006 he is threated with assault by the Jaffna University Students Union head if he steps into the University. A month earlier the President of the University Council received a letter from the Students Union that the VC has to be someone loyal to the Tamil people. Obviously Hoole was not wanted by the LTTE and Tamils supporting LTTE.

So this Tamil Professor, living in Peradeniya, functioning as the VC of Jaffna University receives 2 threats – one from an LTTE front and another from the Tamil student union leader and a certificate that he is not wanted as VC Jaffna University as ‘he is not loyal to the Tamil people’. So the Tamils too regard Hoole as someone ‘against the Tamil race’. Hoole finds his photo pasted across campus walls too. So Hoole was alleged to be ‘anti-Tamil, anti-Tamil race and anti-Hindu’. Hoole was a Christian. All this is not declared by Sinhalese but by Tamils themselves.

Amnesty document adds that a website operated by the LTTE – nitharsanam.com on 12 March 2006 posted a photo of Hoole titled ‘Who is this Fool’ claiming ‘Army spy appointed VC’ and now Hoole says he’s afraid of Sri Lanka’s Army Commander. Unbelievable!

The LTTE website according to Amnesty International links Hoole to the 1990 publication of The Broken Palmyra which criticized LTTE.

The website on 18 March 2006 published another article ‘Who is this Fool – Part 2” again accusing him of being connected to the University Teachers for Human Rights run by Hoole’s brother Rajan Hoole which had documented abuses by LTTE but tends to twist and turn stories to its advantage. UTHR also lied about the supposed death of K. Thyabaran who was found very much alive by the Dhanushkodi Police, India.

According to Amnesty on 22 March 2006 Hoole’s daughter Anbini receives an anonymous call threatening to ‘kill her younger brother and chop him into pieces’ if father Hoole takes post as VC Jaffna University. More calls were received from the PUF.

Hoole ran to report the threats to Norwegian embassy in Colombo & the Sri Lanka Monitoring Mission (SLMM) who was monitoring the 2002 cease fire agreement.

What is really interesting about this Amnesty international document is that Hoole also received calls from the TNA on behalf of LTTE asking Hoole to resign.

Its communique lists addresses to where appeals are to be sent

And copies to be sent to

It was President Mahinda Rajapakse who appointed Hoole as Vice Chancellor of the Jaffna University on 9 March 2006. But his appointment was opposed by the pro-LTTE Jaffna Students Union and more importantly by the TNA.

This is what Hoole told the Island Newspaper when interviewed – http://www.island.lk/2006/03/23/news2.html “I have received several anonymous telephone calls threatening me with death, if I assume duties as the Jaffna VC. They said if I come they will assault me. I want to contribute the development in the Northern Province. I already have proposals and plans to establish an Engineering Faculty in Jaffna. So, I plead and ask the students and the LTTE to come forward and hear my explanations.”

Is he still regarded as ‘anti-Tamil’ ‘anti-Hindu’ ‘not loyal to the Tamil people’ well the man who feared the LTTE fled Sri Lanka for US/Canada on 20 April 2006. An article by Carlo Fonseka to the Island claims Hoole wished to return to Sri Lanka after defeat of LTTE in May 2009 & Carlo Fonseka had on behalf of the Hooles discussed with President Mahinda Rajapakse to support his return. The Hooles returned to Sri Lanka on 2 September 2010 and President Mahinda reinstated Hoole on 13 September 2010 but administrative hiccups and delays & Hoole was not appointed VC of Jaffna University.

Note how Mahinda Rajapakse played a role in Hoole’s appointment and return to Sri Lanka – so much for returning gratitude!

An article by Hoole against EPDP head resulted in a police complaint and Hoole gave statement to police in August 2011, though summoned to appear in Kayts court by Magistrate, Hoole sent lawyer instead of appearing personally and fearing issuance of arrest warrant for contempt of court Hoole fled Sri Lanka for the 2nd time. http://island.lk/index.php?page_cat=article-details&page=article-details&code_title=25194

It is interesting to know who requested Hoole’s return after regime change in 2015 resulting in being propped into the Elections Commission. But, there has to be a link given the manner of his actions coming nowhere near what he claims to be. A closer look at the Elections Commission 2017-2020 strategy https://elections.gov.lk/web/wp-content/uploads/2018/09/Strategic-Plan-2017-En.pdf brings to questions his very role & actions.

Some questions for Hoole from the General Public