20 Desperate UN officials attempt to use Sri Lanka to create a PRECEDENT that UN Members should not allow! 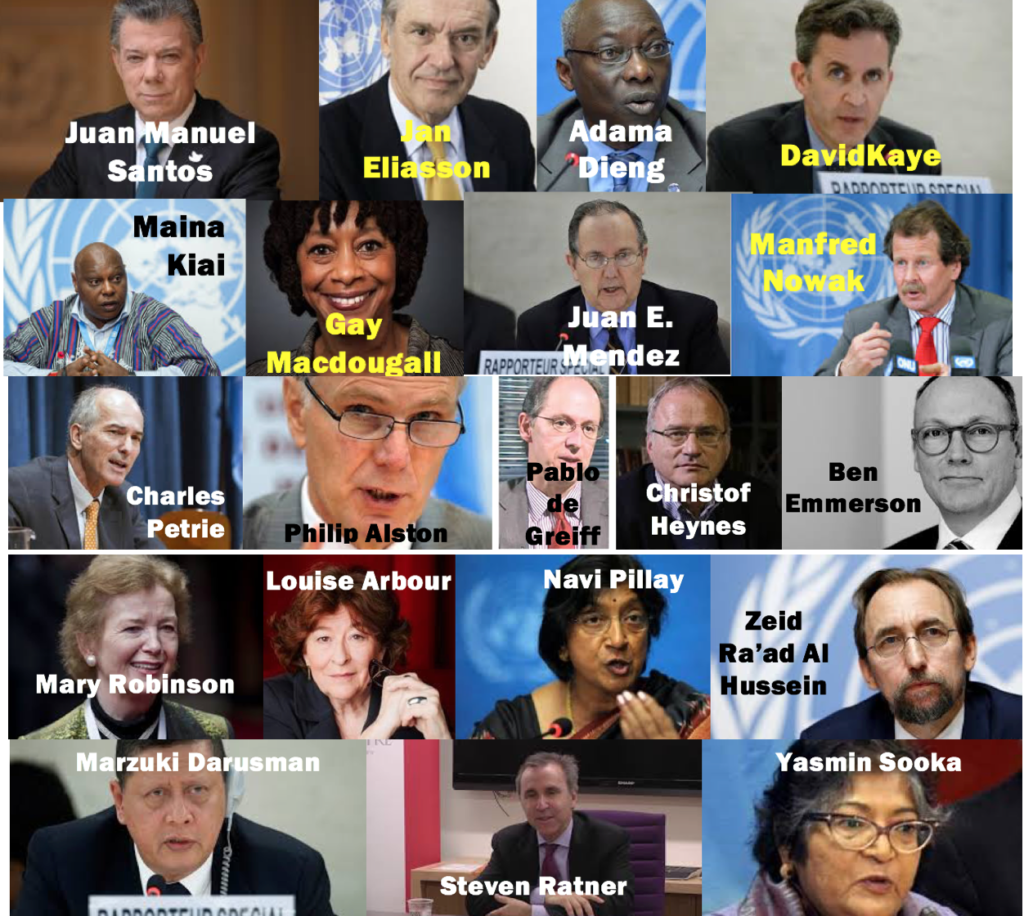 Some held portfolios during the thick of LTTE terror. Some held portfolios that could have stopped LTTE terror. Some held portfolios but simply watched LTTE carnage in silent. All of them did nothing to end the suffering 20million populace suffered when LTTE bombed and committed acts of terror. All of them woke up only after LTTE was militarily defeated or on the verge of defeat and all of them are now demanding answers for how the war was fought completely erasing their inaction during LTTE terror. What are these desperados’ really up to? What should UN Member States read from these actions? When a UN that did nothing to stop terror suddenly comes out with the rule books AFTER the terror is over, it only showcases the UN system is being used to CREATE A PRECEDENCE with Sri Lanka as a guinea pig. The Third World must rally behind Sri Lanka not for anything else, but to safeguard their own nations from becoming target of UN bullies if their attempt to subjugate Sri Lanka into the UN succeeds.

The laws of war and justice was re-written according to geopolitical demands with 9/11. Thereafter, concepts, formulas and templates took the form of what suited powerful nations & their political agendas. So accountability, justice, human rights, democracy, freedoms etc came to be determined on what suited their agendas. The UN system and NGO network became the mechanisms used to fast forward these objectives.

Those who did nothing to stop Rwanda genocide – where actual dead bodies was seen to count cannot talk about any invisible genocide in Sri Lanka – where accusers have failed to present names of 40,000 dead.

Those who did nothing when the Libyan Leader was killed in front of the whole world and watched by the world’s most powerful nation whose officials simply laughed at his death – cannot talk about justice or accountability.

Those who after destroying Libya went on to destroy Syria, bombing a country to the stone age, with goal to dislodge its leader, cannot send petitions against Sri Lanka, if they simply sat in their official chair and did nothing against it using the powers of their office.

Those that watch the suffering of the Iraqi’s Afghans, Darfur, and those who know how ISIS, Boko Haram, Al Qaeda etc are funded and trained cannot just take Sri Lanka’s Armed Forces and demand their penalization and ridicule on the world stage.

Those who are watching Yemen’s humanitarian sorrow, the malnutrition children, the hungry adults and pass the buck because of the countries involved in it are too powerful have no moral right to be only pointing fingers at Sri Lanka because it is a small nation with weak leaders.

Colombia’s conflict began in May 1964 between FARC rebels & Columbian Govt/Army and ended in 2016 the same time Juan Santos was awarded Nobel Peace Prize for bringing to end 50 years of conflict that claimed over 220,000 lives majority civilian and has displaced 5million (almost half being children) – between 1985 and 2012 creating worlds 2ndlargest IDPs.

By 2003, U.S. involvement in Colombia meant 40 U.S. agencies and 4,500 people, including contractors, working from U.S. Embassy in Bogota, the the largest U.S. embassy in the world.

First woman President of Ireland and former UN High Commissioner for Human Rights days before LTTE blew up MV Cordiality ship killing 5 Chinese crew members. What did she do against LTTE? Chair of The Elders, member of Club Madrid, Has links to Eric Solheim who appointed her Chairman of Development Assistance Committee in 2016. In December 1997 after her visit to Rwanda as UNHRC head the Rwandan govt accused her of ‘blatant distortions’ https://www.irishtimes.com/news/robinson-accused-of-distortions-1.135772

Appointed Chief Prosecutor for Rwanda & Yugoslavia. Her indictment of a sitting head – Serbian Leader Milosevic made history though he was exonerated of war crimes only after his controversial death in a prison. As UNHRC head she visited Sri Lanka in 2007 October. Since 2009 she was President of International Crisis Group. It was during her period as UNHRC head that LTTE increased recruitment of child soldiers and even assassinated Sri Lanka’s Foreign Minister – Lakshman Kadiragamar all during an internationally mediate cease fire agreement. What did she do to question LTTE accountability?

As an ethnic Tamil, it was only right that she recused herself from handing Sri Lanka, which she did not. Her statements foretell the biased nature of her actions against Sri Lanka during her tenure as UNHRC head. When she appears on Mullaiwaikkal Memorials distorting her on statements, this proves the case.

Violated Article 2.7 of UN Charter by interfering in domestic jurisdiction of Sri Lanka – asking to demilitarize and commenting on Sri Lanka’s judiciary.

Another report leaked like the Darusman Report, attempting to shed crocodile tears of UN failing to stop a non-existent carnage, whereas UN actually failed to bring peace to Sri Lanka over 30 years. Petrie should have written about the UN failure to stop LTTE terrorism. Petrie was a UN Official in Rwanda when UN simply abandoned Rwanda. Ironically, he was made UN envoy to Burma! Petrie also headed a Norwegian funded project “Myanmar Peace Support Initiative”All hotspots for Western geopolitics!

Petrie resigned from the UN at the end of 2010 but in March 2012 appointed by Ban Ki Moon to do an internal review of UN’s action in Sri Lanka. This report was leaked probably because it was shedding crocodile tears about UN failing the civilians in the final phase without crying over UN failure over 30 years to prevent LTTE terror.

Ban Ki Moon private panel included only one source for alleging ‘executions’by GoSL troops presented by C4 and Alston’s report attaching 3 technical expert reports – from an US forensic analyst Jeff Spiyack who says that there is no way to confirm solely from recordings the identity of the victims or shooters.

American lawyer and Board Member of George Soros Open Society

This expert on genocide may like to redefine what genocide is as per political agenda. Where do you have mass murders in this modern era similar to the atrocities committed during colonial times?

Joined Alston in claiming C4 videos were authentic but did not provide evidence to prove so.

Arrived in SL in 2016 and voiced concern over arrests of LTTE.

Handled case by Lasantha Wickrematunga’s daughter against Gotabaya Rajapakse filed in US. https://cja.org/wp-content/uploads/2019/08/49-2-Declaration-of-Juan-E-Mendez.pdf

a Kenyan lawyer and member of HRW since 2018 was also in Amnesty International in 2001. Regular recipient of letters from LTTE fronts

Columbian lawyer but dual citizen of US. Joined International Centre for Transitional Justice in 2001.  Delivered a lecture on “Transitional Justice” on 20 October 2017 at the Lakshman Kadirgamar Institute and when Pablo speaks at a TGTE webinar what else is there to say! https://www.srilankacampaign.org/live-webinar-sri-lanka-quest-for-justice-rule-of-law-democratic-rights/

Was one of the 5 signatories to seek justice for Dharisha Bastian & her computer! http://dbsjeyaraj.com/dbsj/archives/70310

Darusman was also appointed by Ban Ki to report on the assassination of Benazir Bhutto – that too ended up a pass the buck report.

Also a member of the privately commissioned UNSG panel of experts and thereafter became the ‘comrade’ of LTTE fronts appearing at their events. Though paid by EU to look into affairs of South Africa/Africans she is preoccupied with Sri Lanka and its military. Her reports churned out for UN sessions are all without evidence and hype only.

Thus 20 personalities linked to the UN system have put aside all other conflicts, all other human rights or humanitarian issues and is only bothered about Sri Lanka. We want to know why? We want to know what propels them to be so obsessed with Sri Lanka ONLY AFTER they all watched Sri Lanka suffer 30 years of terrorism & DID NOTHING TO STOP LTTE TERROR?

How dare they talk about justice & accountability when they ignored 30 years people suffered under LTTE.

Out of the blue, when the Sri Lanka Armed Forces ended 30 years of terror, how dare they enter holding the rules of war when they chose to ignore all laws that LTTE flouted when they committed pre-meditated murder. They cannot simply brush 30years of terror aside and demand truth and justice for a period they wish to control and dictate to governments.

The fact that their very claim for 40,000 dead has fallen flat with their setting of the Missing Persons Commission which has not got any 40,000 dead names!

This looks nothing but a desperate attempt by UN officials (serving & former) to cover up their follies and biases. When they single out only Sri Lanka where not a bomb has gone off or LTTE suicide attempt occurring since LTTE defeat in May 2009, it baffles all of us as to why these officials are so obsessed with Sri Lanka. This needs serious attention. None of the allegations made have concrete evidence to prove anything beyond doubt.

What are they all up to?

Why are they using Sri Lanka to try to create a precedent?

This is why the third world UN membership should not allow such a precedence to be created using Sri Lanka as a guinea pig.