Does the BASL proposals answer the economic crisis in Sri Lanka? 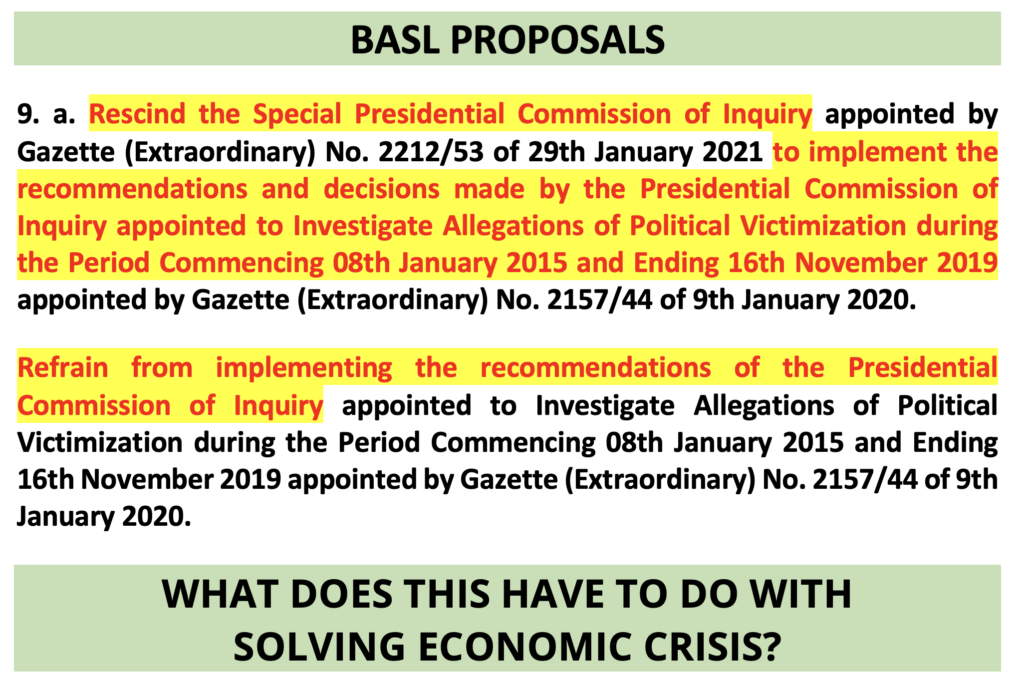 The Bar Association of Sri Lanka has presented a list of proposals claiming they will ‘restore political & economic stability’ in the country. While these are a set of ‘aspired’ goals, there is no pressing necessity to be implementing any one of the proposals unless they provide immediate solutions, which are the call of the hour.

If BASL claims 20th amendment is the reason for the current crisis – BASL may like to provide reasons for other economic crisis we have had in the past without 20th amendment.

What is the ‘system change’ that can provide equitable governance?

Can BASL explain what it means by a ‘common Sri Lankan identity’ respecting the ‘diversity of its People’. This looks like terms taken from western-backed NGO jargon.

There is nowhere that says Government MPs cannot function independently – in fact prior to 1978 constitution, a Government MP crossing led to a by-election and another MP getting elected. Ideally, the current proportional representation should change & first past the post system of electing MPs should be brought back. This will certainly end deal makers entering parliament.

Sri Lanka has been following parliamentary democracy & as such governments get elected and rejected through the ballot only. People’s protests are their fundamental right, but a precedence cannot be created by overthrowing a government by placards and protests. Their demands must be pressurized into implementation so long as they are valid and relevant to all citizens.

It is strange that the BASL are taking pains to promote only one western monetary institute for economic recovery & emergency financial assistance. Has BASL looked at the long term repercussions for the people from the conditions that Sri Lanka has to agree to obtain this loan facility? Is this the sole solution for Sri Lanka to gain economic stability? Is this loan to improve credit ratings so that Sri Lanka can entrap itself further by securing more loans?

Given that the BASL is also in agreement that ‘appointment of new Ministers will not’ resolve the present political instability, will a bi-partisan consensus without appointments happen in the current Parliament?

The BASL has given 5 objectives in its proposal

– None of the proposals provide an immediate solution except perhaps item 4.

BASL further presents a list of 8 proposals as “Overarching Requirements” for a stable government – once again the BASL mentions IMF.

This first proposal and its message nullifies all of the proposals that have been made thereafter as the BASL says that what they are proposing are only ‘transitional provisions’ and are meant solely to ‘address the exigency of the situation’ and are not a ‘precedent’. Therefore, why go to pains to make out a list of proposals with so many major changes?

If BASL proposals are only to address the exigency of the situation why propose 21st a, repealing 20th a, restoring 19th a and even include number of judges and demand another additional expense in re-establishing Constitutional Council & Independent Commissions? With the current currency crunch why should CC & IC be given ‘enhanced financial independence’ – what is BASL implying? Should they be allowed to get external financial assistance directly? Will this not create conflict of interest?

On what grounds is BASL suggesting that CC choose the above positions, given that this very document constitutes BASL’s 21st amendment proposals?

If the President is Commander in Chief of the Armed Forces, why should he not hold position of Minister of Defense, when he is the one who has the right to declare war?

On what grounds is the BASL giving to abolish the executive presidency? When the people are the one’s that directly elect the President, why should that right be hijacked from the people without a referendum?

We saw how the ‘Unity’ government under yahapalana functioned. The present proposal is attempting to parachute individuals outside of the parliamentary system and place them as PM. Who is the national list MP that will agree to resign? From which party is this national list MP to resign? How can an outsider be allowed to become PM of a country?

If the BASL proposals are only as transitional provisions and not precedents – why should BASL recommend that an a team of ‘civil society’ be appointed & the government has to consult them on ‘all major policy decisions’? Is this an attempt to plug civil society into politics?

With this – BASL has self-exposed itself. Why should BASL presenting a set of proposals to bring economic & political stability to Sri Lanka nit pick this particular gazette covering only period from 2015-2019 & propose that the Presidential CoI recommendations should be annulled? This is a very strange proposal from BASL.

What warrants hurrahs for the BASL proposals requires explanation given that it has not provided any solution apart from going to IMF and a string of constitutional changes that are meant to only weaken Parliament and subtly transfer powers to civil society with financial independence. What is shocking is the 9th proposal to annul the Gazette that created a Presidential Commission of Inquiry into the victimization during 2015-2019 with recommendations by the Commission. Why would BASL take pains to nitpick only this Commission and propose it to be annulled?

This highlights the political bias of the BASL and its proposals