Would Mahinda Rajapakse set fire to his own house? 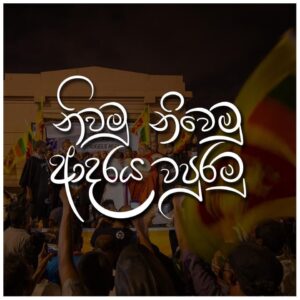 Ask yourself, if you were Mahinda Rajapakse, with no intention of resigning as PM, would you unleash a mob to attack unarmed protestors, knowing the ultimate blame will fall on your shoulders? Presuming the answer is negative, think about what could have really happened. Without falling for pick &  go versions, think of the events & make your intelligent conclusions.

Did the President err in allowing structures inside public place for a handful of protestors to claim it as their own inside which curfew & emergency were deemed null & void, questioning inequality to others having to remain indoors! This protest soon was overtaken by others with agendas diluting the message of the protestors (knicker show/anti-Buddhist slogans & dramas etc)

The ultimate outcome of this attack

There are numerous opinions regarding these attacks which are linked to the allegation that the police & army just watched looking helpless.

Scenario 2 – were the attacks by

Then, there is the deafening silence of the head of State & all protestors appear to have forgotten about the “kakka” – were these two with their families overseas also facing some sort of arm-twisting not to take action as were the other heads upon whom fell the responsibility of defending the nation & the people.

From the above scenarios, we must be intelligent enough to analyze & wonder who has the biggest advantage of the chaos that prevails? It is certainly not Mahinda Rajapakse. Who has the advantage & how?

We see very strong messages coming from the US & India is even mooting Indian troop presence claiming Indian interests in Sri Lanka are at risk.

If you were in Mahinda Rajapakse’s shoes – would you have created a situation where you are being hounded by helmet gangs and there’s a threat to Sri Lanka’s sovereignty?

In getting the PM to forcefully resign, the President has been further cornered minus the brothers that backed him, by getting over 40 key MPs to lose their homes & fear for their lives & family, they are now in a situation where to survive in politics, they have to bend on knees & beg – no longer can they dictate terms or demand dollars or positions for their vote. They are now political pawns & will say or do anything for their survival. They have been effectively neutralized. This is the perfect potion for pass legislation sans even debate or objections. There is even the question of rallying candidates to contest for the next elections with no strong leader to lead the party.

Such an operation cannot be done with local brains.

Therefore, we have to wonder who are the brains behind the chaos that erupted. From where did the pluck the helmet gangs for the job?

The biggest disadvantage was, to no one else but Mahinda Rajapakse – the once loved and the most charismatic politician in Sri Lanka. A Goebbels propaganda systematically brainwashing people over 5 years has been successful. He is now the most hated person in Sri Lanka by the LTTE-lobby/ the LTTE diaspora / the anti-Rajapakse Christian/Catholic lobby / the JVP-SJB-Peratugami & even foreign intel.

Being the only politician able to command the largest vote base, it was important that he had to be neutralized ahead of an election as well as to weaken the state and prevent him leading any opposition.

Getting rid of him was not a major exercise given the arrogance of his family members and the greed of acquiring wealth. Whether allegations of corruptions are true or not, the campaigns around them united people against him far beyond previous times.

Combining the unprovoked attacks, the allegations sufficed to justify that he was unsuited to be PM.

If he was not prepared to give up his PM position even on the day that supporters were arranged to arrive in support of him, was this unprovoked attack planned to force his resignation and to neutralize all the MPs that posed a threat for the ultimate goal of the brains behind the attacks – to abolish the Executive Presidency?

With the resignation of the PM & entire Cabinet, even those who oppose the Executive Presidency would realize its merit. Whether a weak leader sat in the seat, the position is giving the much needed powers to keep the country stable. Those that recently proudly proposed its abolishing will be realizing its importance now, especially in the light of personal vendettas/looting taking place in the guise of ‘revenge attacks’.

If the Opposition is brimming with glee – they must surely know, they can also be next!