The best piece of legislation introduced by the yahapalana government is the clause related to dual citizenship. It highlighted the NATIONAL SECURITY aspect of a person who was a citizen of two countries contesting elections to hold public office & surfaced many conflicts that could arise from holding citizenship in two countries. Therefore, this important clause must remain in 20a. If the President of Sri Lanka had to forsake his dual citizenship to become President, there is no reason why any other cannot do so if they genuinely wish to serve Sri Lanka.Geetha Kumarasinghe was unseated because she was a dual citizen. Onus is on authorities to ensure that no other MP is seated in Parliament hiding their dual citizenship. MilindaM designate Sri Lanka High Commissioner with cabinet ranking as per media reports is also a dual citizen. This clearly nullifies his ability to serve as High Commissioner and petition can be filed to this effect. Dual citizenship nullification should also be extended to all public servants in the light of national security threatto Sri Lanka given our post-independence past of external interference into internal affairs by foreign destabilizing agents.

Article 92(b) and Clause 20(4) of 19thamendment & Article 91(1)(d)(xiii) of Constitution stipulates that “No person shall be qualified to be elected as a Member of Parliament or to sit and vote in Parliament if (d) (xiii) “a citizen of Sri Lanka who is also a citizen of any other country”from contesting elections.

Geetha contested for the 2015 Parliamentary Election from Galle District & was elected to the 15th Sri Lankan Parliament by receiving 63,955 preferential votes. She took her oaths on September 1st when the new Parliament convened.

Nominations for General Elections closed on 13 July 2015. The Elections Department had enough opportunity to reject nomination papers if the contestants were dual citizens. The UPFA Galle District list was challenged but the Returning Officer said he could not reject the entire UPFA list due to one candidate being a dual citizen.

Did the Elections Commission investigate dual citizenship status in 2015 & 2020?

5 voters of Galle District filed a Writ petition in the Court of Appeal requesting Court to declare Geetha K ineligible to remain in Parliament while holding dual citizenship.

MP Geetha files statement of objection in the Court of Appeal

3 May 2017– Court of Appeal issued Writ of Quo Warranto declaring MP Geetha Kumarasinghe disqualified to be a MP. Attorney General was asked to recover expenses caused to the State by Kumarasinghe as per Parliament Election Act.

9 May 2017– Geetha appeals to the Supreme Court

Court of Appeal issued a Writ of Quo Warranto disqualifying UPFA MP Geetha as she was a dual citizen of Switzerland/Sri Lanka when filing nomination to contest Parliamentary elections & failing to negate her dual citizen status by renouncing her Swiss nationality before applying to contest to enter Parliament in August 2015.

Deputy Solicitor General Janak de Silva appeared for Controller of Immigration and Emigration, the Secretary General of Parliament and the Attorney General.

Why is the same not being done to other MPs hiding their dual citizenship status?

The Court of Appeal by its order dated 28.9.2015, directed the Controller General of Immigration and Emigration to produce all the documents relating to the citizenship status of MP Geetha

THIS MEANS OTHER DUAL CITIZEN MPs IN HIDING CAN ALSO BE EXPOSED by the Controller General of Immigration & Emigration.

Court of Appeal is charged with the jurisdiction to hear Election Petitions as has been provided for in section 93 of the Parliamentary Elections Act and Article 144 of the Constitution. 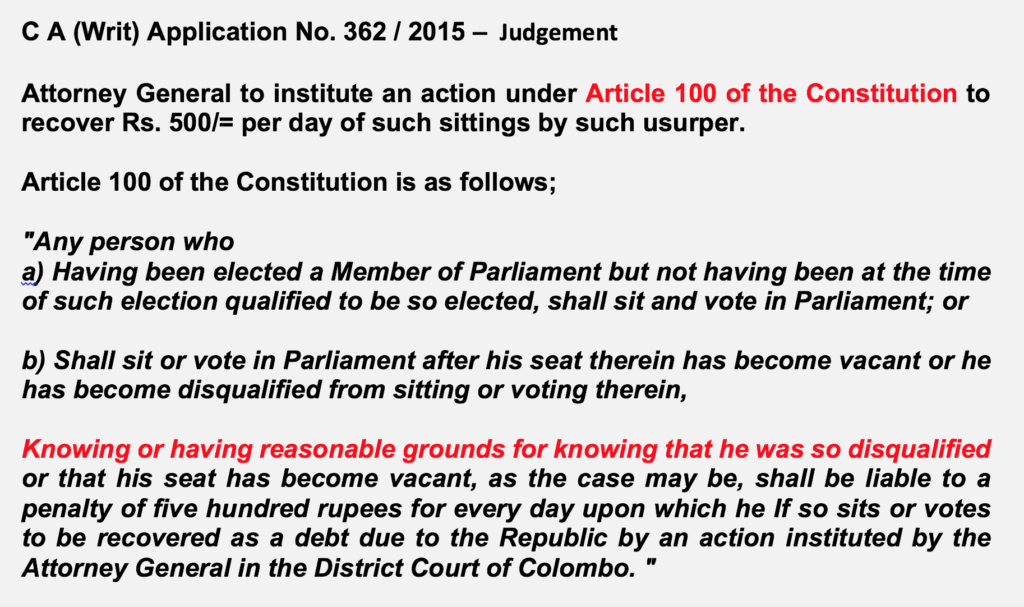 Court directed the State to recover costs from Ms. Kumarasinghe for each day she sat in Parliament knowing she was a dual citizen & disqualified to be a MP.

The Court of Appeal also highlighted the role of Parliament

Deputy Solicitor General Janak de Silva stated that Geetha who possessed citizenship in another country could not lay claim to any privileges provided to MPs because it violated Clause 91 (1) of the Constitution.

How many MPs are hiding their dual citizenship & enjoying privileges of an MP illegally?

If the Attorney General could inform the Court of Appeal that MP Geetha was still a dual citizen – why cannot the AG inform if any other MPs are in Parliament hiding the fact that they are dual citizens. Geetha’s case is important because she was honest enough to disclose in her nomination papers that she was a dual citizen whereas others holding dual citizenship aware of the 19a provision against dual citizens, chose not to mention they were dual citizens.

Should the Election Commission & AG take a bigger role in declaring to the Public that there is no MP in Parliament who is a dual citizen. Can the EC & AG tell this with authority? EC is further bound to establish contestant’s dual citizenship status by Election Act too.

Some important aspects of the Supreme Court verdict

How many MPs in present Parliament are hiding their dual citizenship status?

THIS MEANS THE CONTROLLER IS ALSO AWARE OF ALL OTHER DUAL CITIZENS IN PARLIAMENT. How can he be made to reveal these names?

The need to produce evidence of negating one’s dual citizenship as per Sections 101, 103 and 106 of the Evidence Ordinance 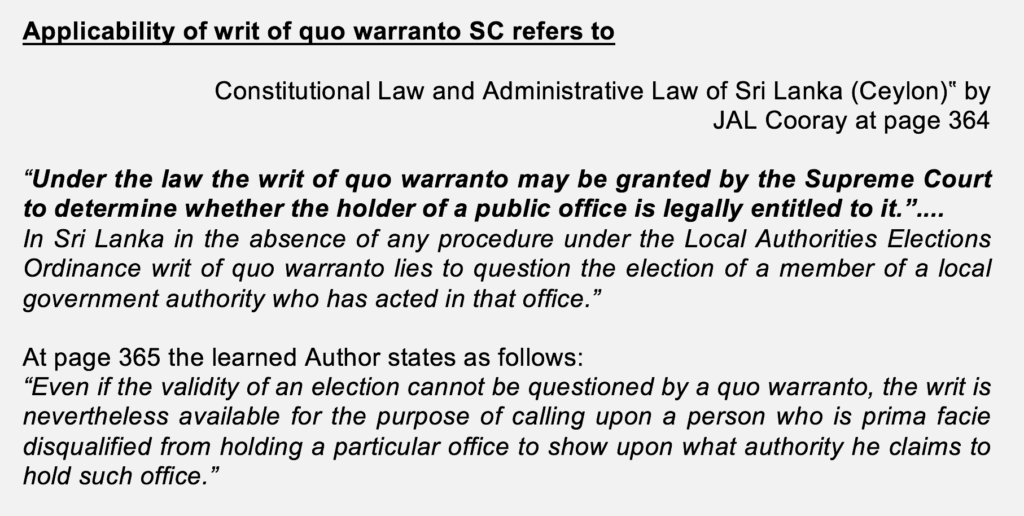 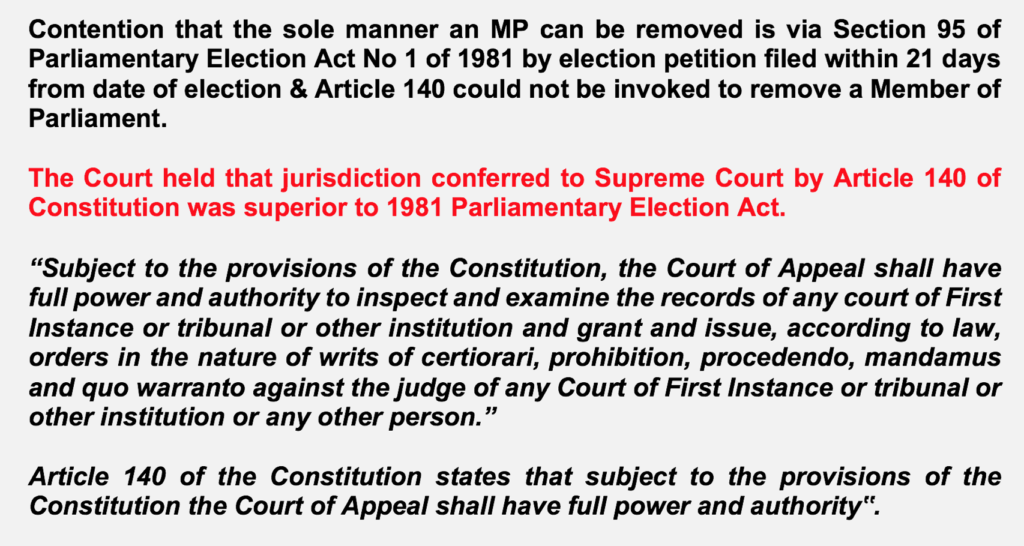 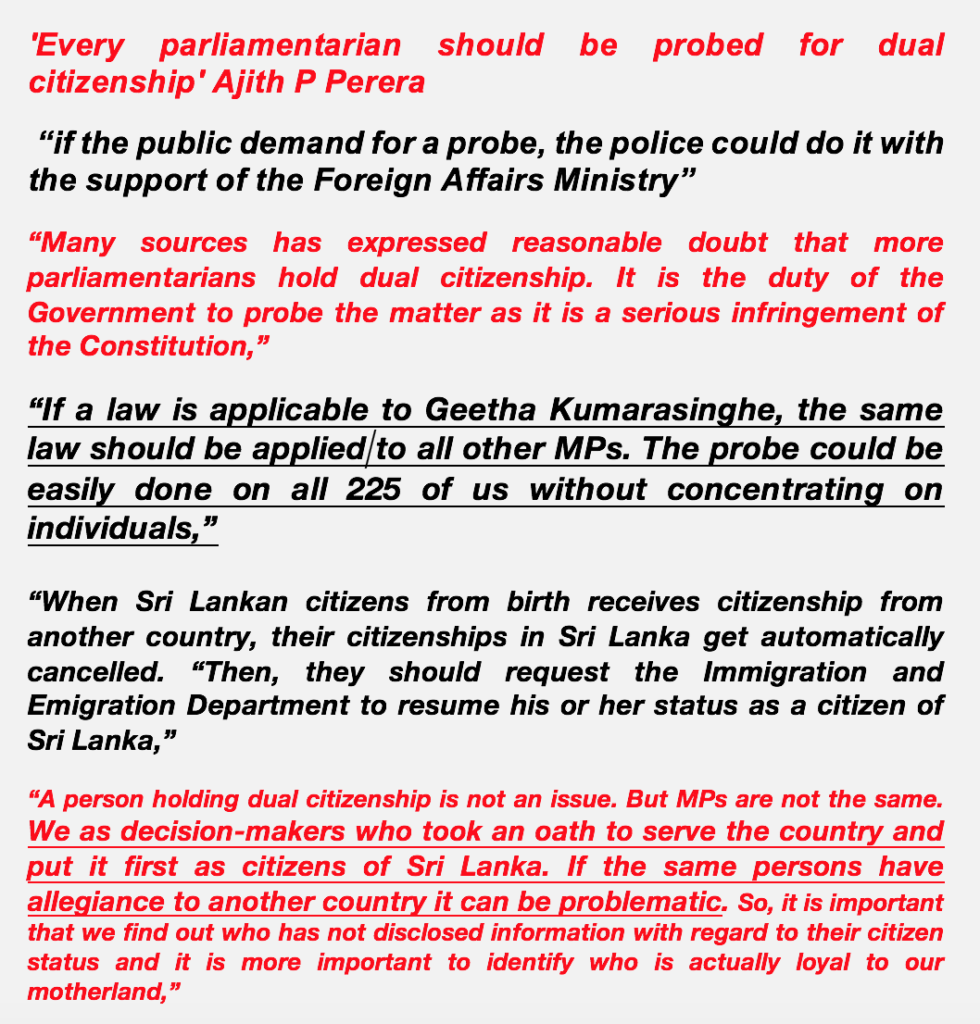 If President Gotabaya Rajapakse had to forsake his dual citizenship to serve the nation, all others holding dual citizenship must be forced to make that same sacrifice. As members of Parliament or holding public office & being looked after by the State of Sri Lanka, their loyalty and allegiance should ONLY be to SRI LANKA.