Fake News by NETH FM lands it in a lawsuit by Dr. Walter Jayasinghe 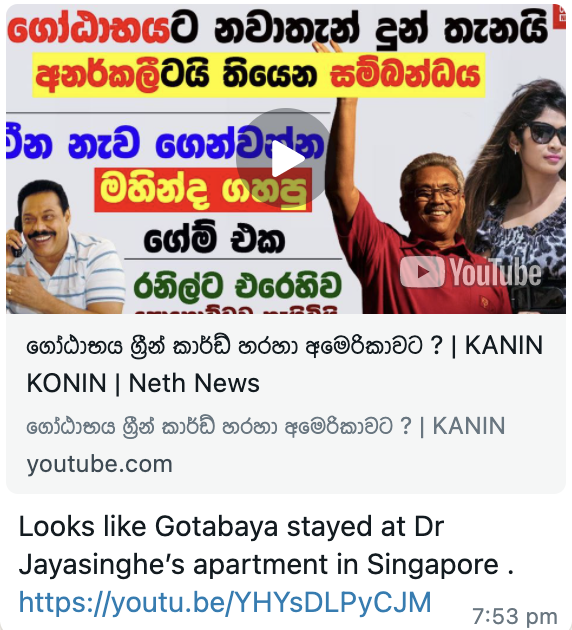 Sri Lanka is a victim of disinformation, misinformation, distortions and fake news. Sri Lanka’s media has to shoulder much of the blame for their hunger to sensationalize news & draw advertisements and profit. This tends to make them opt to spread malicious lies rather than report & allow the people to decide. On 19 August 2022, NethFM program ‘kanin konin’ declared with authority that former President Gotabaya Rajapakse who ‘fled’ the country was staying in the home of Dr. Walter Jayasinghe in Singapore. Not stopping there, NethFM presenter went on to add that Dr. Walters’son Dishan Jayasinghe was the former husband of Anarkali Akarsha. The objective was clearly to trigger people to think in all directions. Nevertheless, philanthropist Dr. Walter Jayasinghe is one of Sri Lanka’s richest domiciled in US & has done a yeomen service to Sri Lanka & Sri Lanka’s cultural heritage overseas. Subjecting his good name and reputation for media lies cannot be ignored and allowed to continue without punitive action as an apology does not suffice after intentional fabrications have been relayed to listeners across the channel.

Dr. Walter Jayasinghe has instructed his lawyers to file suit against NethFM for using his name to spread disinformation & misinformation.

The news item is not only false but is dragging names of respected individuals into media witch hunts. Not only are such incidents by media defamatory, they cause irreparable damage. Media fake news often end up resulting in anonymous threats, insults & undue harassment over phone/email etc. Media does not realize the effects of their lies & fake news. While a retraction & written apology is only a damage control, the media must desist from making public declarations without verifying their authenticity first.

The philanthropist Dr. Walter Jayasinghe has through his lawyers instructed NethFM owners to retract the defamatory statement and tender an unqualified written apology within a week or face legal action.

This will serve as a lesson to other media agencies who are also looking to sensationalize news for their own agendas fooling the masses into believing versions of news they have cooked up without verifying their authenticity.