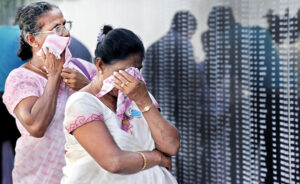 It’s now 13 years since LTTE was defeated. Let’s cut to the chase & put on the table the reason why Sri Lanka is still grappling to close the witch hunt taking place smearing the good name of the Nation & its Armed Forces. The fault lies entirely with the Foreign Policy advisors, legal teams, AG’s Dept of the successive Govts since 2009. From Foreign Minister downwards the advice was ‘don’t upset the UN’ ‘the foreign envoys don’t want Sri Lanka to ask these questions’ ‘our aid may get cut if we ask the right questions’ and so forth.

All that Sri Lanka’s Officials and Ministers end up doing in Geneva is proudly appraise how Sri Lanka has been following every demand UNHRC presents instead of asking the questions that would silence UNHRC.

It is because of this stupidity that the Armed Forces cannot enjoy the victory over terrorism that they deserve and are slapped with silly bans just to carry the sham witch hunt for geopolitical objectives.

While UN/UNHRC are faulted – the GoSL & officials in particular the legal teams have disappointed the Nation & the Armed Forces.