Why are Sri Lanka’s lawyers not filing cases against the Corrupt? 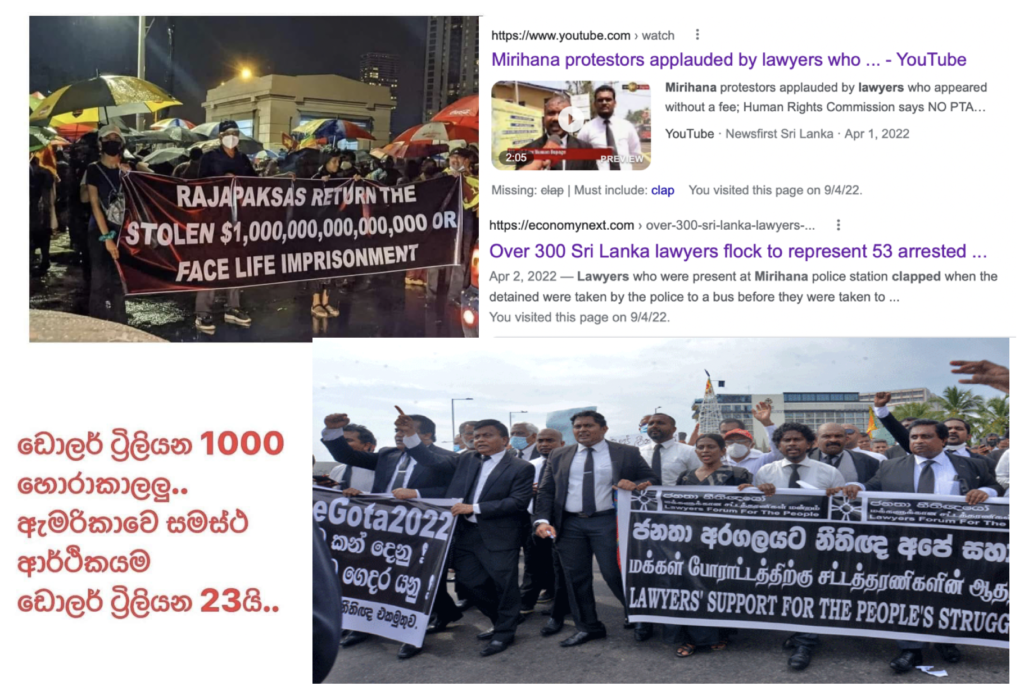 An interesting aspect of the recent protests in Sri Lanka was the open participation of some members of the legal fraternity chanting slogans and even protesting against corruptions. People can bewail corruption because they are in no position to take action other than protest, can this be said of lawyers? People who wish to hold anyone accountable for corruption, has to go to a lawyer to file a case. People are unable to do so because they do not have the funds to meet the legal fees lawyers ask of them. Filing a case against a high profile figure by a citizen may drain him of all his wealth. However, what is stopping the lawyers who are first citizens to take up cases on their own? Why are the lawyers protesting on the streets or giving voice cuts for media publicity not taking the legal path, when all they have to do is file cases against those they claim to be corrupt? After all, there are political parties who claim to have the files and these parties have their own legal teams too.

From the BASL President to his followers, we have witnessed a steady flow of legal fraternity taking to the streets alongside protestors, holding placards and giving interviews even to international media pointing fingers and bewailing corruption. This charade should not continue without question.

Firstly, how far is the judicial pillar & legal profession uncorrupt?

From Judges to magistrates to ordinary lawyers – how many of them are not corrupt?

What has been done about their corrupt ways? If we are on the subject of accountability, should accountability not be applicable to the Judicial pillar as well? How fare is it to simply put behind bars anyone who makes statements on the corruption of the courts, the judges, the lawyers as ‘contempt of court’.

So fundamentally, to accuse another of corruption, one must first be uncorrupt.

So why are the lawyers not taking action against corruptions in Sri Lanka?

This is the golden question – unanswered

They do not need to be protesting on the street – they need to take out the allegations and present their case with legal arguments.

In taking to the streets & showing solidarity with protestors the lawyers were openly advocating mob rule. If mob rule that prevailed is to be accepted as a precedent above the rule of law – where will be the role of lawyers or the Judiciary in the future?

Any group or groups of violent protestors can deem it their right to storm places (public or private) forcibly remove people, take over their possessions & declare it is their ‘right’. In such a future scenario, what would lawyers do or what can they do?

If lawyers can take to the streets in protest ‘voluntarily’ why can’t they voluntarily take up the allegation files & file cases without waiting for people to fund the case & pay their legal fees?

If they could appear pro bono for protestors arrested & free them while clapping & cheering them why can’t they take up corruption cases pro bono on their own?

https://island.lk/basl-chief-counters-allegations-denies-seeking-political-office/ the legal fraternity no doubt is split in perceptions and legal opinion. However, where corruption is concerned there cannot be any split in perception. If anyone is corrupt – it must be proved and the legal fraternity are the only players who can present a case to the Courts to determine.

The question that the public should now be asking is – WHY ARE THE LAWYERS NOT TAKING UP CORRUPTION CASES PRO BONO WITHOUT WAITING FOR PEOPLE TO PAY THEM?

The legal fraternity are citizens first – therefore as individual citizens, they have every right to file a case on their own.

Why are they not filing cases against those they claim are corrupt – be they Judges / Lawyers / Politicians / Public Servants / Corporates ?