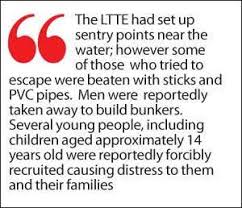 We need a closure. We know how many Sri Lanka Armed Forces personnel died or were injured during the final phase of the conflict but the problem lies in determining the dead LTTE and dead Tamil ‘civilians’. Confounding matters is that LTTE had a trained and armed civilian terrorist unit. These civilians dying during hostilities with the Sri Lankan Armed Forces CANNOT be categorized under civilian dead. Obviously ICRC, UN, UNHRC, OHCHR & OISL and all entities on the ground during the conflict are shy to answer how many LTTE died, how many civilian LTTE died and how many Tamil civilians who had no role in hostilities died and more importantly how many of these Tamil civilians were killed by LTTE or by Sri Lankan Armed Forces. Without being able to answer these fundamental questions no one has any right to credit all deaths to the Sri Lankan Armed Forces & accuse them of war crimes. The British MPs writing on behalf of LTTE fronts in UK better have answers to these questions.

Paul Scully MP as head of the All-Party Parliamentary Group for Tamils has written to the British Foreign Secretary on 29 January 2020 has sought clarification on 3 points related to Sri Lanka’s conflict which ended in May 2009.

Point 3 is important and certainly demands the OMP and LLRC & MOD to combine the names and prepare a master list of the dead/missing with details. But, it also necessitates Britain and all other foreign countries to come clean about the Tamil refugees/asylum seekers in their countries as well. For all we know some of the missing, presumed dead may actually be alive and living in the UK, EU, Canada, Australia etc… we have very valid reasons to claim this as the case of Kathiravel Thayapararaja, said to have been tortured and killed by the Sri Lankan security forces on 13th September 2009 (after LTTE defeat) but ended up very much alive when arrested by Indian police in 2014 (5 years later). So for 5 years the Sri Lankan Armed Forces had been accused of killing Thayapararaja and NONE of the accusers saw fit to apologize to the Armed Forces & Sri Lankan Government or correct their stories.

But who is MP Paul Scully – he may be head of the APPG-Tamils but he was also speaking at the Mullivaikkal Remembrance Day 2018 at the Reformer’s Tree, Hyde Park, London

What is noteworthy about the APPG-for Tamils is that its registered secretariat is the British Tamil Forum a group banned in April 2014 at a LTTE Front using UNSC Resolution 1373 but had the ban removed following the co-sponsored of UNHRC Resolution in September 2015 on a flimsy excuse of ‘reconciliation’ https://publications.parliament.uk/pa/cm/cmallparty/180606/tamils.htm

What is also interesting is that the funding of All Party Parliamentary Groups tracking millions of pounds was launched in 2017 and it would interesting to find out who funds APPG-Tamils. https://www.theguardian.com/politics/ng-interactive/2017/jan/06/track-the-millions-of-pounds-given-to-all-party-parliamentary-groups

If we go by official figures – complaints filed with the Presidential Commission of Missing Persons has only 23,586 as of 2017, of which 5000 are missing Sri Lankan soldiers.

Who are the 18,586 in the Missing Persons Commission.

OMP must release their names.

But we can piece the puzzle of the missing or dead if the foreign governments helped by disclosing names of Tamil refugees/asylum seekers.

When LTTE retreated they took a lot of Tamils to be used later as human shields & hostages.

The appeals by UNSG, UNSC and diplomats to LTTE to release Tamil civilians is proof of this. That LTTE shot and killed Tamils fleeing is also nothing the UN system & diplomats can deny. The question is HOW MANY TAMILS who tried to flee did LTTE kill? These deaths cannot be credited to the Sri Lanka Army account.

Only those who can supply proper evidence to above questions can accuse Sri Lankan Armed Forces of any war crimes – otherwise as a Nation we refuse to accept fairy tales and we will not allow our National Army be defined as war criminals for no reason.